When Lani Chan and Nathan Bender left New York City for California in 2020, they had already perfected the art of building a delicious sauce. It all started after they met at Columbia Journalism School in a master’s program for documentary film production. Despite finding steady work in breaking news during the era of the Trump presidency, working in journalism turned out to be a grind of its own, one that didn’t cover all the bills, so they both tended bar to fill in the gaps.

“We were basically making sauce, but in a different style,” says Bender, during a break from a busy morning handing out samples of their sauces—Magic Beans, Chili Crisp, and Dragon’s Booty—at the Sebastopol farmers’ market.

After moving to Occidental at the beginning of the pandemic, the couple turned those mixology skills towards perfecting a chili crisp that has since become the flagship product of Big Spoon Sauce Co.

“The media grind in New York was really impacting our lives in a big way,” says Bender. “There’s not a lot of love or financial returns for documentary filmmaking. It was draining, and we wanted to do something that we were passionate about that wouldn’t shorten our life spans.”

So how did they make the leap from screens to sauce? Chan grew up in San Rafael in a Chinese American family that has lived for generations in the Bay Area. Sauces made with fried shallots, garlic, chilis, and fermented black soybeans were a staple at her family’s kitchen table. Bender lived in China for five years, traveling from north to south through the country during research as a Fulbright scholar. Eventually, that led to writing a book about the burgeoning homegrown wine culture in China.

“I fell in love with chili crisp, which is one of the most prevalent condiments in Sichuan province and throughout the whole country,” says Bender. “From street food to fine dining, [it’s] on the table.”

After a few years of making a version of the sauce for friends and family, they decided to branch out, serving their homemade chili crisp at a charity drive for nonprofits Asian Pacific Environmental Network and Heart of Dinner. “We basically sold out within seconds,” says Bender. Clearly a promising business opportunity was at hand, so on Halloween 2021, Big Spoon Sauce Co. made its public debut with a booth at the Sebastopol farmers’ market.

“We’re building the bike as we’re riding it,” admits Bender, though if the crowd gathered around their booth is any indication, the wheels are fastened on tight.

At the moment, Big Spoon’s product line-up includes three regular sauces, with plans for limited runs of flavors driven by the season. This past spring, that was a green chili crisp. Currently, Radical Family Farms in Sebastopol is growing garlic chives for a future batch, in line with Big Spoon’s desire to source produce locally.

So what about the fire in the belly? For the Chili Crisp, you’ll get hit with medium-level heat from a blend of guajillo, morita, ancho, and chile de arbol, plus the Sichuan peppercorns. Magic Beans has a lighter, sweeter, less spicy profile that gets its flavor from spices like star anise, cardamom, ginger, cumin, and more. Put it on dim sum or to flavor a bowl of noodles topped with sauteed gai lan (Chinese broccoli).

And then there’s Dragon Booty. With a front-facing hit of heat from a chili called (for good reason) the Carolina Reaper, to the long-finishing burn of the habanero, this one will get you begging for relief, and then dipping in for another spoonful. Put it on cod, fish tacos, poke, grilled oysters, grilled cheese sandwiches, melty brie, or turn it into a marinade for grilled shrimp skewers. Be forewarned: A little goes a long way.

Everything is made, jarred, labeled, and shipped by Chan and Bender out of a rented commercial kitchen space at The Altamont, a short walk from their rented home in downtown Occidental. As they approach that first milestone birthday, they’re looking forward to launching a subscription program modeled on boutique wine clubs, with tasting events and illustrated recipes in a newsletter.

“Sustainability is at the crux of our growth,” says Bender. “We want to be as low impact and low waste as possible,” Chan agrees. For her, the sauces aren’t just a brilliant way to flavor a fresh cod; as a former climate reporter, food is an entry point for educating customers about regenerative farming, local sourcing, and the impact of our food choices on climate change.

“Moving forward, we really want to focus on highlighting California produce—a regional sauce,” says Chan. “We want to talk about foraging, land stewardship, and conservation for generations to come. The food is the best here in California—the olive oil, the produce. If we can jar that and figure out a way to scale it for other people to enjoy, and see that it’s worth conserving, that’s a goal we have moving forward. We’re still journalists and documentarians at heart.” 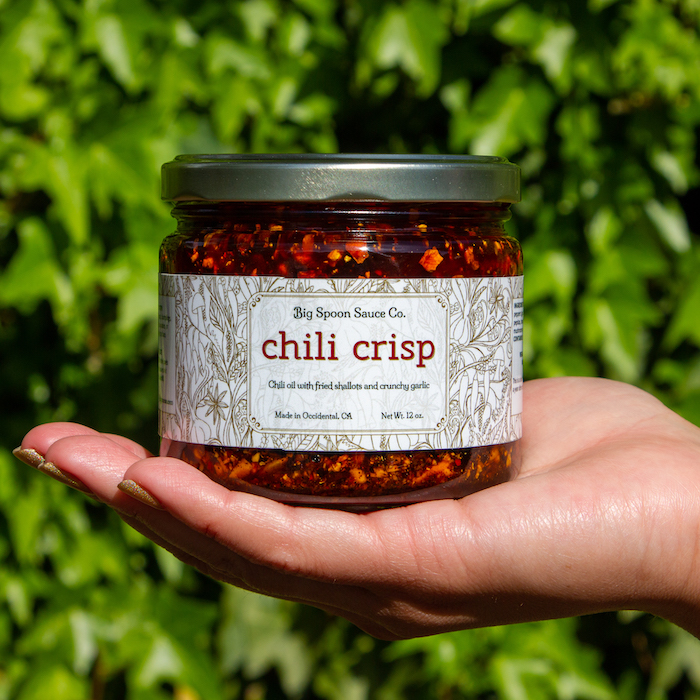 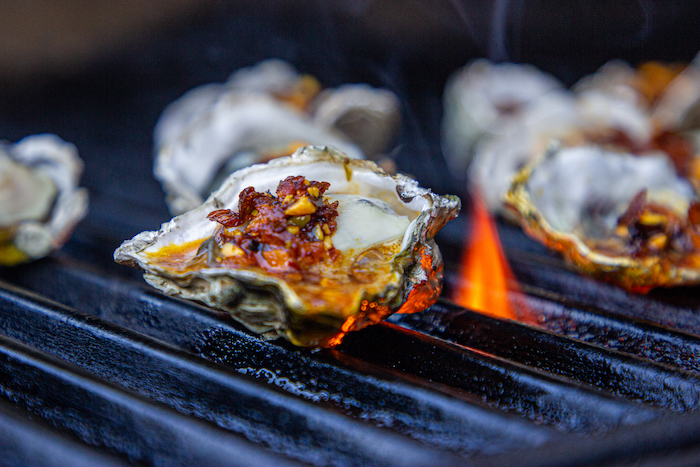 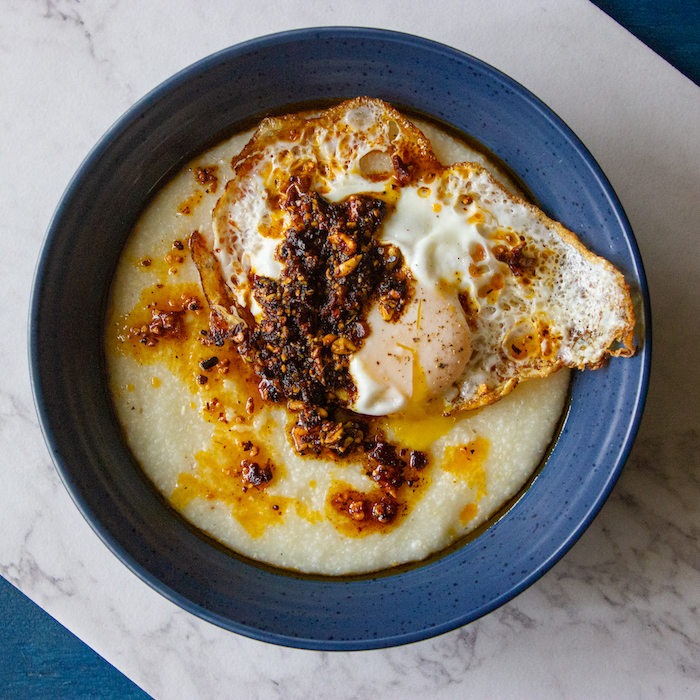 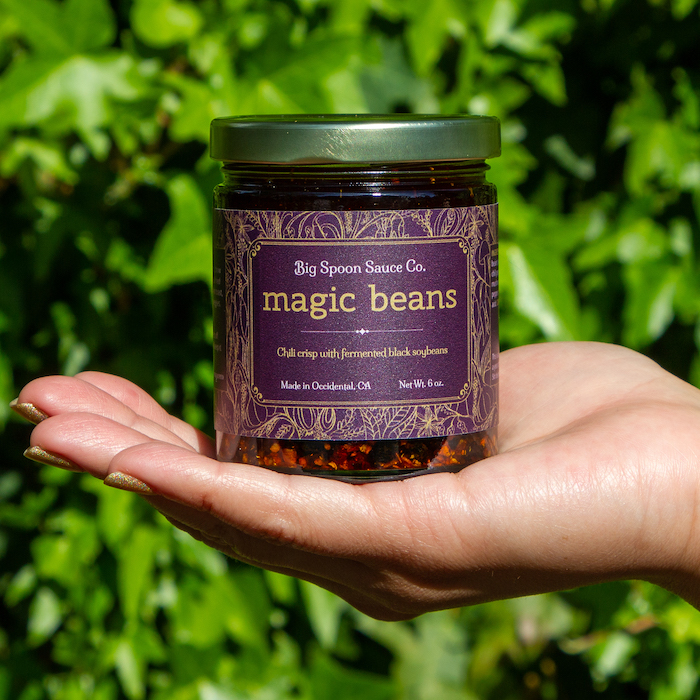 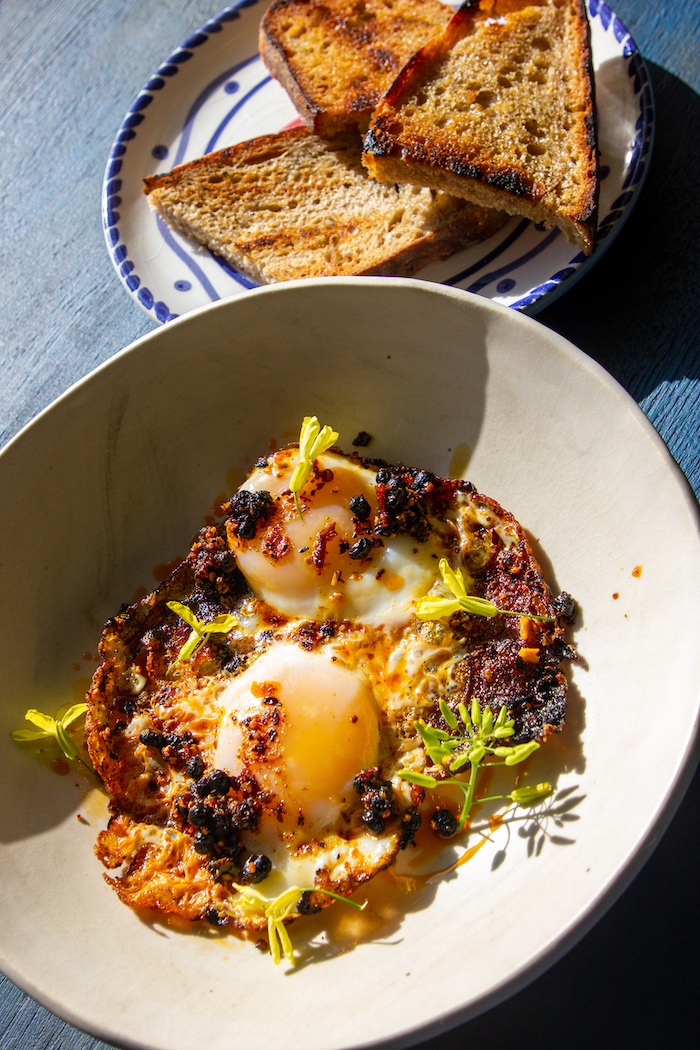 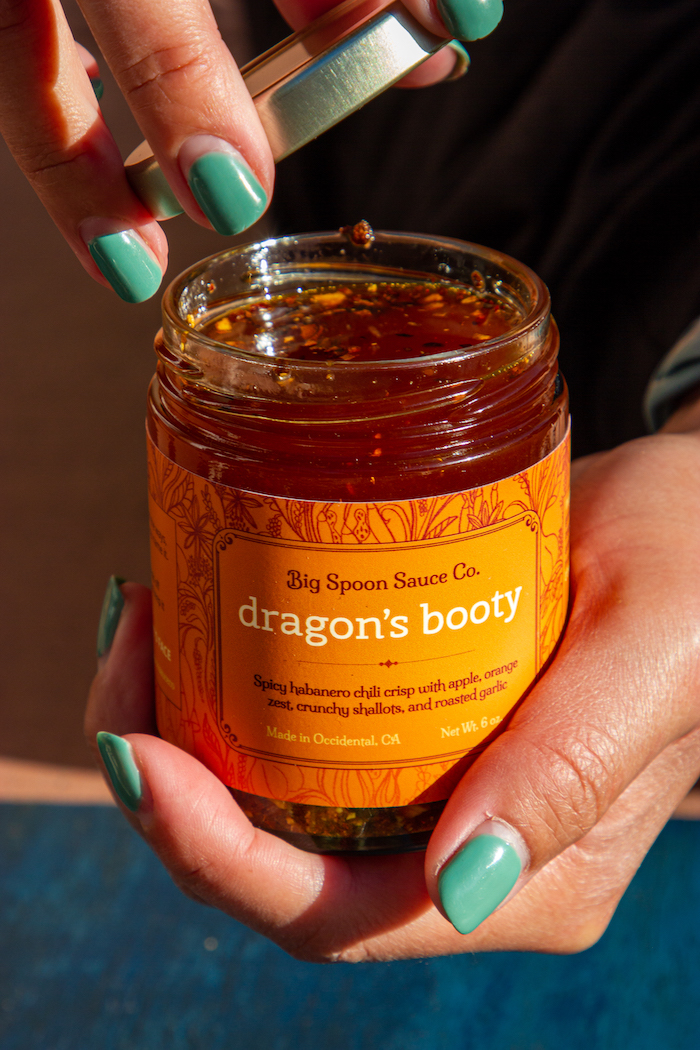