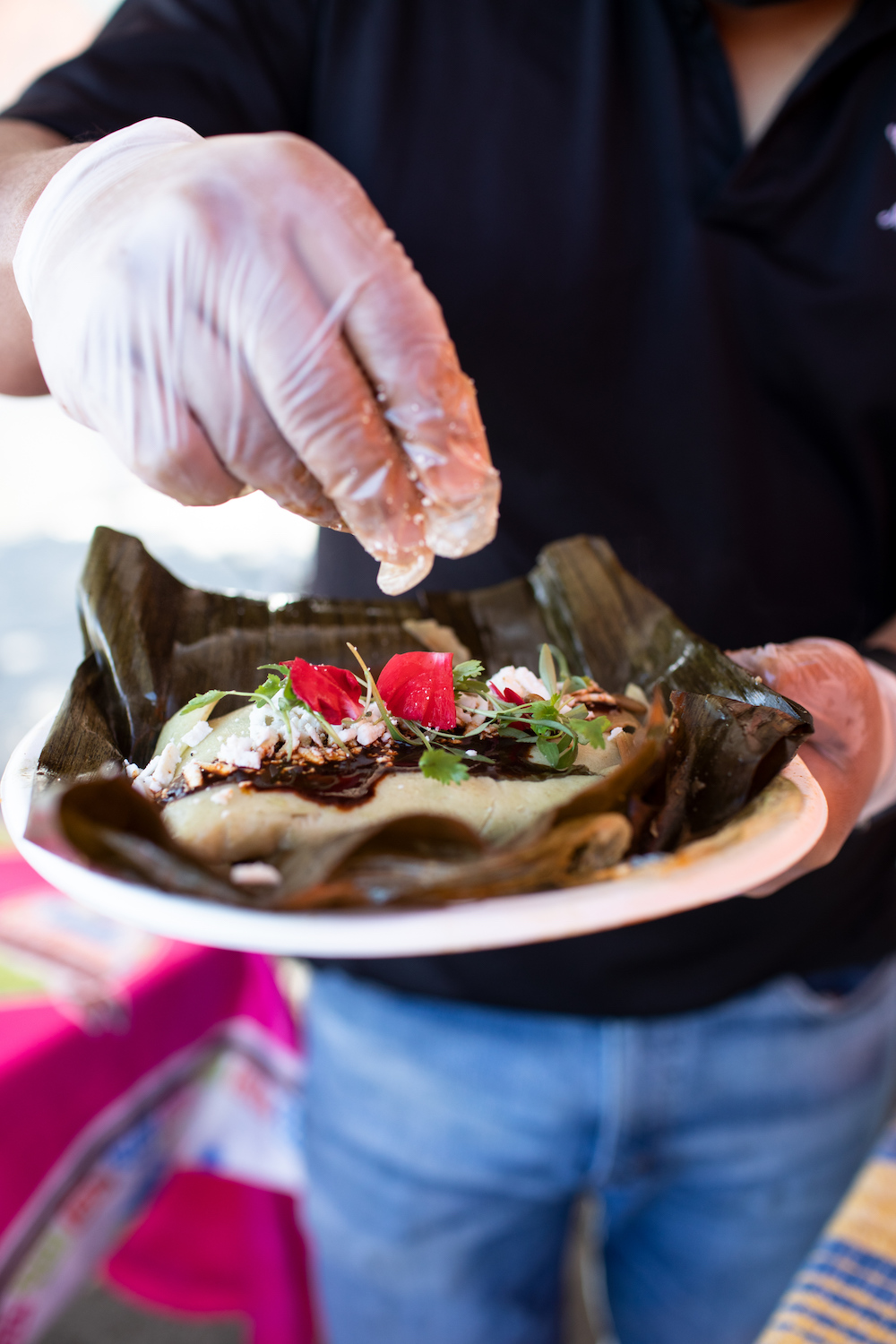 When I arrive at the Tamales Oaxaqueños (wa-ha-cain-yose) booth in Roseland’s Mitote Food Park at 10am on a chilly Friday morning, Neil Pacheco is just about sold out.

Marta Sanchez, who works at General Hydroponics up the road, has been buying her lunch here twice a week for the last three months, since a friend recommended it. She nabs the last mole negro tamale, which Pacheco adorns with cojita, roasted pepitas, microgreens, crema, and edible flowers (a reminder of his mother’s Dia de los Muertos ofrenda). “These are the best I’ve ever had,” Sanchez tells me before walking off with her hearty plate, a California twist on tradition.

Over the next hour and a half, a steady flow of people come by, met with Pacheco’s affable apology, “Terminado. Discuple.” He offers them a cup of his warm homemade atole, with oatmeal, brown sugar, cinnamon and chocolate, satisfyingly thick. Since opening in mid-summer just a few months ago, Pacheco’s already established a loyal following who start rolling in around 5am—about an hour after he begins setting up his food booth. Fridays are especially busy.

By about 1pm, with the help of Bianka Castillo, he breaks everything down and hauls it back to Tamales Magos, where Bianka’s mother Maria has been selling corn husk tamales for 17 years. Just 200 meters apart on Sebastopol Avenue, the two businesses have partnered up; the night crew starts at 9pm to cook the following day’s masa and mole for both of them.

Named from the Nahuatl word “wrapped,” tamales (tamallis) are an ancient MesoAmerican food dating back to 8,000–5,000 BCE. Lauded for their portability and density, tamales likely fueled Mayans and Aztecs on hunting expeditions and traveling days. After an enthusiastic reception at the 1893 World’s Fair in Chicago, vendors started selling the delicious, cheap, and filling food all over the US. A cartoon from 1894 shows a smartly dressed couple on Broadway buying tamales from a vendor with a charcoal burner and a basket.

Over a century later, the humble tamale has remained as popular as ever. President Obama once quipped, “You don’t want to get between Michelle and a tamale,” reportedly the former First Lady’s favorite food.

Like most street food, tamales reflect and embody regional variations, and can be filled or topped with all manner of meat, veggies, and cheese—or even stuffed between two slices of bread for the serious carbo-loaded torta de tamal, popular in Mexico City. 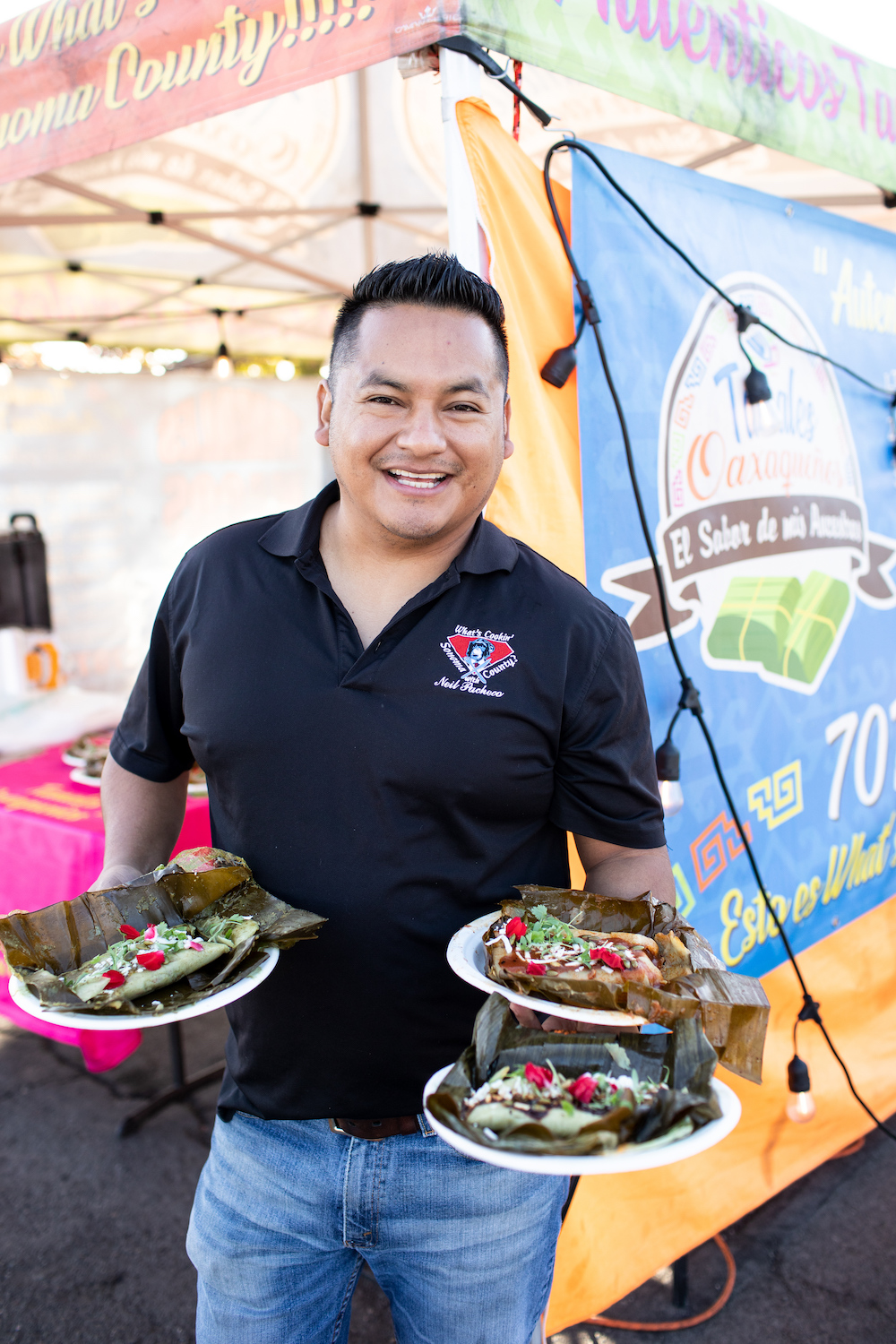 Land of the Seven Moles
Pacheco, who was born in Texas but raised in the tiny tropical town of El Sesteadero in Putla, Oaxaca, makes the traditional tamales Oaxaqueños of his childhood. “As a kid, my mother would send me out to chop the banana leaves on our farm,” says Pacheco, who dreaded the chore, especially after slicing his left pointer finger.

Still, he carries on the tradition of wrapping his tamales in banana leaves (procured from local Asian stores), which infuses the cornmeal with a subtle, earthy flavor. They’re grilled on giant pans until soft enough to wrap without breaking, and house a delightfully moister and sweeter dough than I am used to.

At Tamales Oaxaqueños, expect to find half a dozen different kinds of tamales each day. Most are filled with some type of mole, that iconic sauce of his home state borne of chili peppers, spices, and lots of patience, passed down through generations of his family. “I call it the mole dance,” Pacheco tells me, miming the stirring jig performed every few minutes for hours on end.

The black mole, mixed with shredded pork, is comprised of five different chilies, chocolate, cinnamon, sesame seeds, nuts, and animal crackers—“a taste of Christmas morning.” Chicken gets bathed in the epazote mole, made from the popular and aromatic herb that sometimes grows along the Russian River and has long been used in Mexican cuisine. Non-meat eaters will be pleased with the vegetarian tamale filled with a kicky blend of jalapeño, tomato, garlic, and cheese; the plain sweet corn tamale, popular for breakfast, is buttery masa at its best.

Los Super Chiles
“In life, you’re going to learn how to do everything, how to cook and clean and do laundry,” Pacheco’s mother told him as a kid, the oldest of three boys. And he did. After moving to an apartment in Atlantic City to live with his father, the teenager assumed the cooking and cleaning roles of his mother, who’d stayed in Mexico.

Perhaps unsurprisingly, Pacheco was drawn to the hospitality industry, a perfect match for his authentically optimistic nature. The former radio host of “What’s Cookin’ Sonoma County?” and Hispanic Chamber of Commerce board member has worked as a food runner at Dry Creek Kitchen, a server at River Rock Casino, and now the Graton Casino where he’s been a manager since 2013. Until a couple of years ago, he also taught adult education.

“In what little free time I have, I try to keep my mind sharp. I ask people I admire for book and podcast recommendations,” says Pacheco, who understands well the poles of ambition and adversity. After a year-long landscaping business did not pan out, he pivoted to help his wife, Graciela Cruz, start her own mobile pet cleaning business.

The father of two can be found on Tuesday afternoons atop his bicycle riding with the fellow members of Los Super Chiles, a group of men cultivating exercise and self-care, on the Joe Rodota creek trail from Santa Rosa to Sebastopol’s Barlow.

As for his food, Pacheco’s got big plans—to open a permanent Oaxacan restaurant of his own, maybe to export tamales all over the world. “This is just the beginning,” he says. 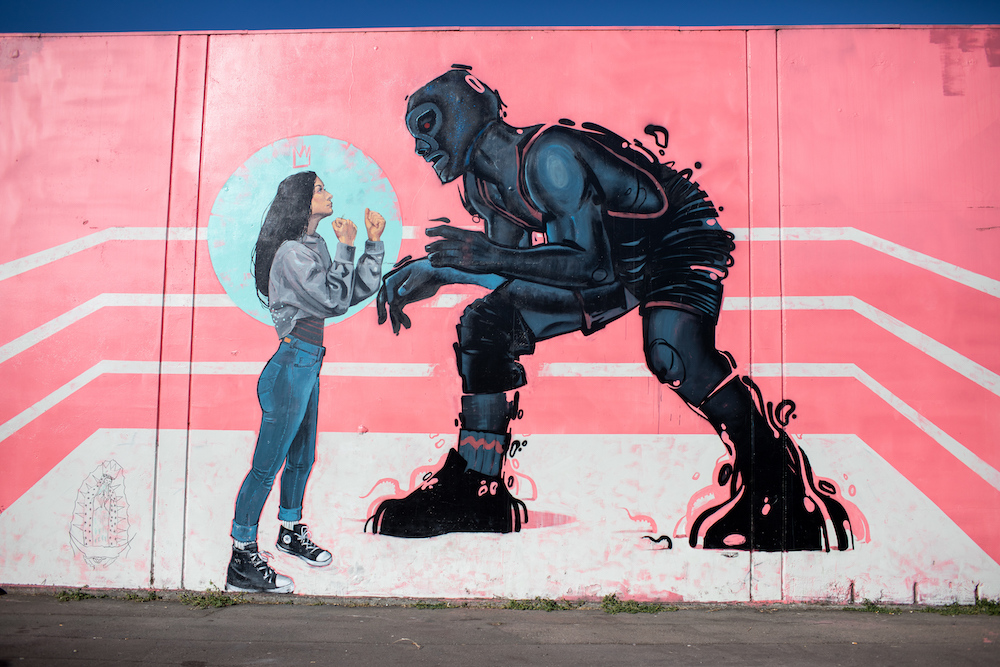 Mitote Gets An Upgrade
Mitote means party or gathering in the Nahuatl language, and the food park in Roseland will soon live up to its name more than ever. As part of the Roseland Village Project Tierra de Rosas, the vast expanse at 665 Sebastopol Road will be transformed with giant shipping containers housing public restrooms and a bar, which will feature both alcoholic and non-alcoholic beverages. A children’s play area will be added, too. In addition to Tamales Oaxaqueños, regular food trucks include El Charro Nergo, Lucha Sabina, La Victoria, Maria Machetes and Gio Ey Los Magos.

A few of Neil Pacheco’s favorite Roseland businesses:
“You can find almost anything at the Mercadito (665 Sebastopol Rd.), which features goods from across Mexico, including Oaxaca, Jalisco, Michoacan and Mexico City. Find decorations, souvenirs, clothing, paintings, even a woman who makes custom hats. I love the one I got from her, very artistic and infused with good energy.

“Next to El Roy’s is La Oaxaqueña (722 Sebastopol Rd.), a store that sells traditional Oaxacan handicrafts. If you are looking for something specific, they will get it for you, and they also ship goods for you to Mexico. For flowers, I always recommend Floreria Selena (1170 Sebastopol Rd.) which has all kinds of floral arrangements and gifts, and even a free monthly newsletter with tips about flower care and plants. I also love Fantasy Bakery (3952 Sebastopol Road). They make delicious cakes and can handle last-minute orders. 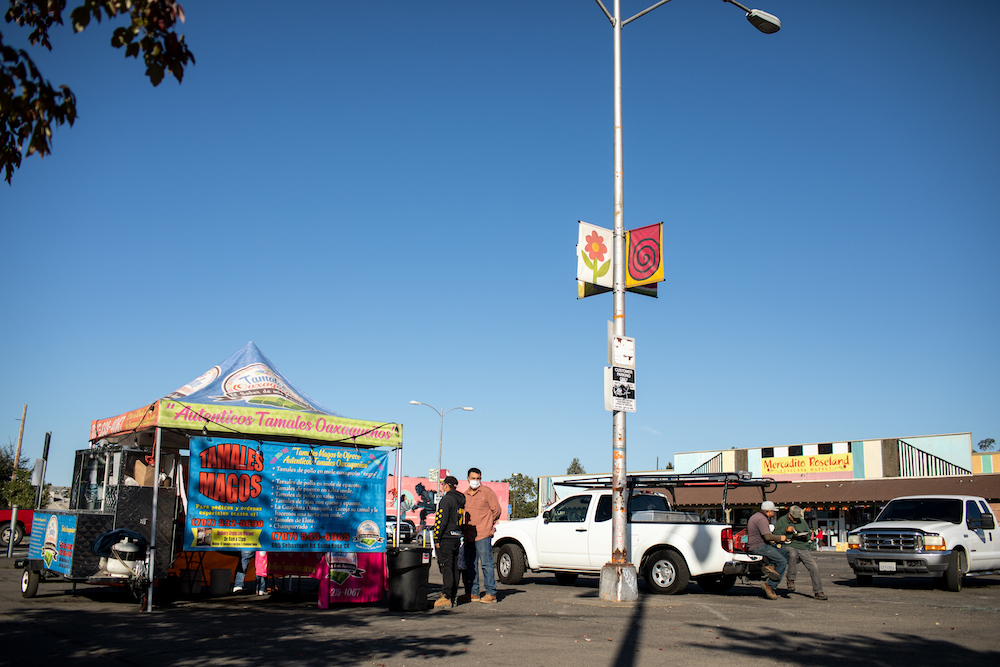 “Take the kids to Frozen Art (500 Sebastopol Rd. B) for the very best ice cream, run by a small family from Jalisco. Then you can go next door to the new Roseland Library, which is a perfect place for them to get their homework done. I’m impressed with all the computers, resources, and programs they offer.”