Chef Anne Sanusi Makes Everything to Order at Sonoma Crust 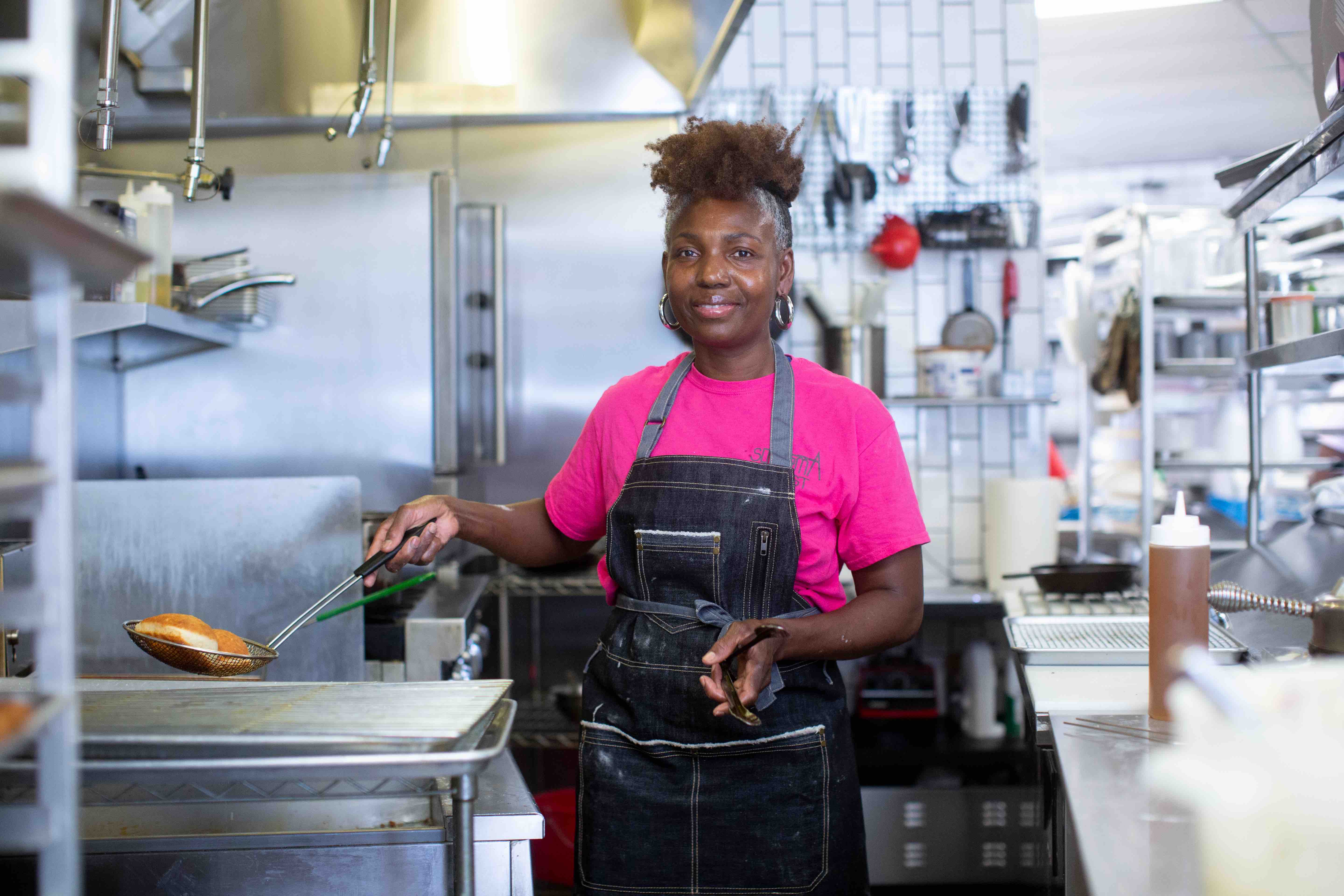 The first time I spotted Sonoma Crust’s tiny business park hideaway was in my rear-view mirror as I was driving down Dutton Avenue on my way back from the gym. I had heard rumblings about an enchanting fried chicken and waffle sandwich from my foodie friends and thought to myself, “I just exercised, I deserve a treat,” while making a screeching, haphazard turn into the parking lot. That would prove to be one of the most wonderful and torturous decisions I could’ve made, as every gym trip thereafter, I would have to steel myself to drive by without stopping, haunted by the deliciousness within that would nullify my hard-earned calorie burn.

Owner, temptress, and kitchen wizard Anne Sanusi knows the magical spells to lure unsuspecting patrons into her humble eatery. There are no secret, specialty components to Anne’s food. In fact, she conjures her distinctively complex flavors from surprisingly few simple ingredients and makes everything in her kitchen from scratch, no matter how laborious the processes may be or how many hours on her feet needed to accomplish them. “I do all the cooking because I am very picky, kind of a control freak,” Anne admits to me, adding, “I love what I do and give it 110 percent. If it is not up to my standards, it doesn’t go out, I start again. No one can care about the food as much as I do.” 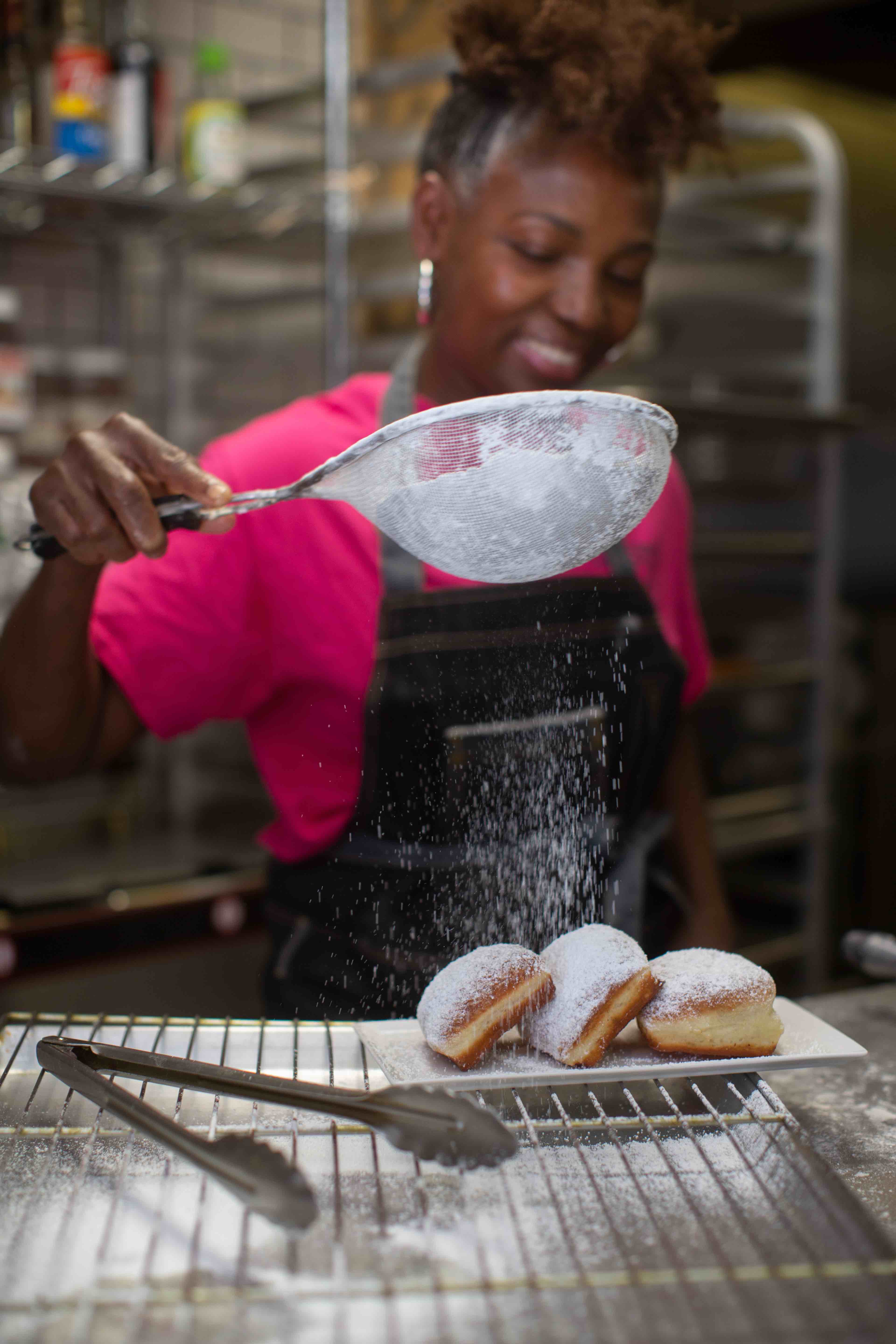 Anne’s life-long love affair with food began in Nigeria, where she was the second-oldest of nine children. “My mother was a trader, so she was away a lot of the time, and my older sister didn’t like to cook, so feeding the family fell on me,” she explains. “Even in college, I would make the 30-minute drive home Friday night to go to the market and then cook all weekend.”

After getting married in 1995, Anne and her husband moved to London, where he attended Imperial College. It was there that Anne found her love of baking, particularly bread. “In Nigeria, food is rice-based. We never had bread on our table.” In London, Anne discovered poolish, the light, fairly wet sponge that is the French version of a yeasty sourdough starter, which lends a distinctive, elevated flavor to the signature waffles and beignets that are Sonoma Crust’s mainstays.

In 2010, Anne suddenly and unexpectedly lost her husband to pancreatic cancer, finding herself a single mom to a 10- and 15-year-old. Two years later, she made the cross-country move from Arlington, Virginia, to Santa Rosa to follow her dreams of going to culinary school and starting a catering business. 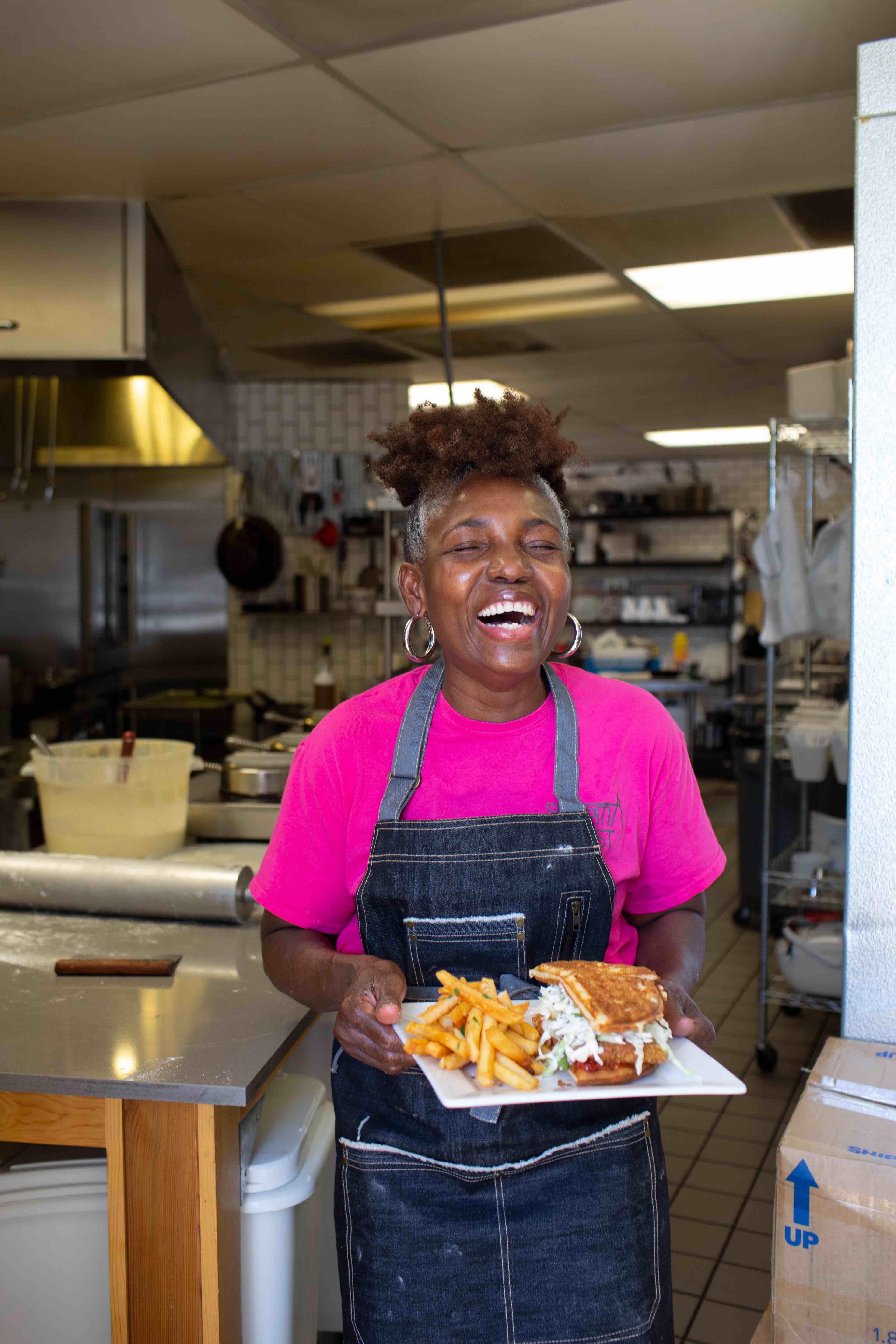 The beignet, the original magical arrow in Sonoma Crust’s quiver, comes three to an order in a powdered-sugar-filled brown bag for $5. Anne describes them as “like a donut, but better.” This is my kids’ favorite menu item by far, and they delight in shaking the bag of warm beignets and then opening it to an eruption of steamy airborne sugar, revealing optimally, maximally dredged pillows of golden, fluffy, fried brioche dough. The kids typically cry twice: once while having to endure the intoxicating aroma on the car ride home, and again when I won’t let them eat the remaining cup or so of powdered sugar at the bottom of the bag once they’ve devoured every last crumb.

The Sonoma Crust beignet gained notoriety at Santa Rosa’s Wednesday Night Market, where Anne served upwards of 600 a night to an unending line of patrons. Anne loved being outside and around people at the market, a welcome change from working solo in her tiny kitchen—and it also provided the added bonus of doubling as a workout. “I build muscle in my arms because I’m rolling, rolling, rolling; cutting, cutting, cutting; frying, frying, frying,” she tells me. “We started at 5:00 with no break until we were done. We never let up, there is no stopping.”

Although everything on Sonoma Crust’s menu of elevated Southern-American cuisine is darn near perfect, I seldom deviate from the thing I ordered on that first fateful drive home from the gym: the classic chicken and waffle sandwich. Sometimes, I get adventurous and go for the spicy version, which includes the addition of in-house pickled serrano peppers and spicy tomato jam. But it’s pretty hard to improve upon the original: waffles that are crispy on the outside and almost custardy on the inside, topped with expertly fried chicken, a light and crisp apple-cabbage slaw, ginger honey, and a garlicky aioli. These sandwiches are a steal at $12.50-$13; I would happily pay double. 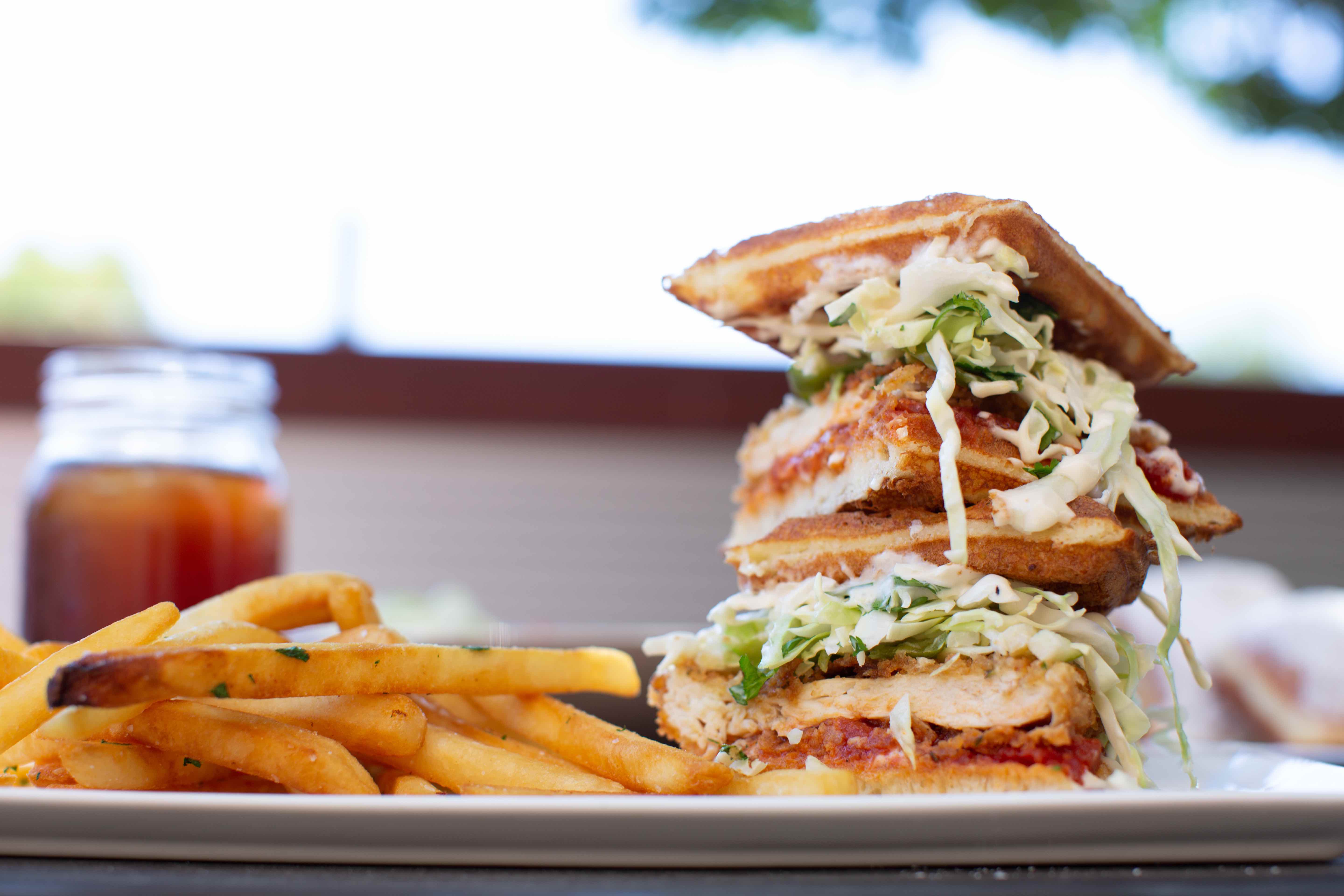 Each sandwich is a multi-day labor of love. All of the components are made from scratch, and each sandwich is made to order. Take, for example, the chicken, which is a five-step process (six if you count the frying). “I tried to simplify the process by getting deboned chicken, but it’s more flavorful when it’s less processed, so I get chicken on the bone,” Anne explains. After de-boning the chicken, she filets it and pounds it out into a uniform thickness. It spends the night in her signature marinade and then is breaded the next morning. “If you want to make money, this is not the way,” Anne admits. “This is about the satisfaction of seeing people eat my food. This is about quality.”

Sonoma Crust’s 600-square-foot location, with only 350 of that delegated to kitchen space, was originally a commercial kitchen used to prepare food for their food truck and catering business. It was never meant to be what it has become, which is a highly in-demand eatery with only a few tables on their outside patio. “At first we were serving maybe 10 people a day. But then it grew and grew to 70, 80, 90 a day.” After shelter-in-place and the advent of the Save Sonoma County Restaurants! Facebook group, where Sonoma Crust receives many accolades from some of their 17,000+ members, that number has now eclipsed 100. 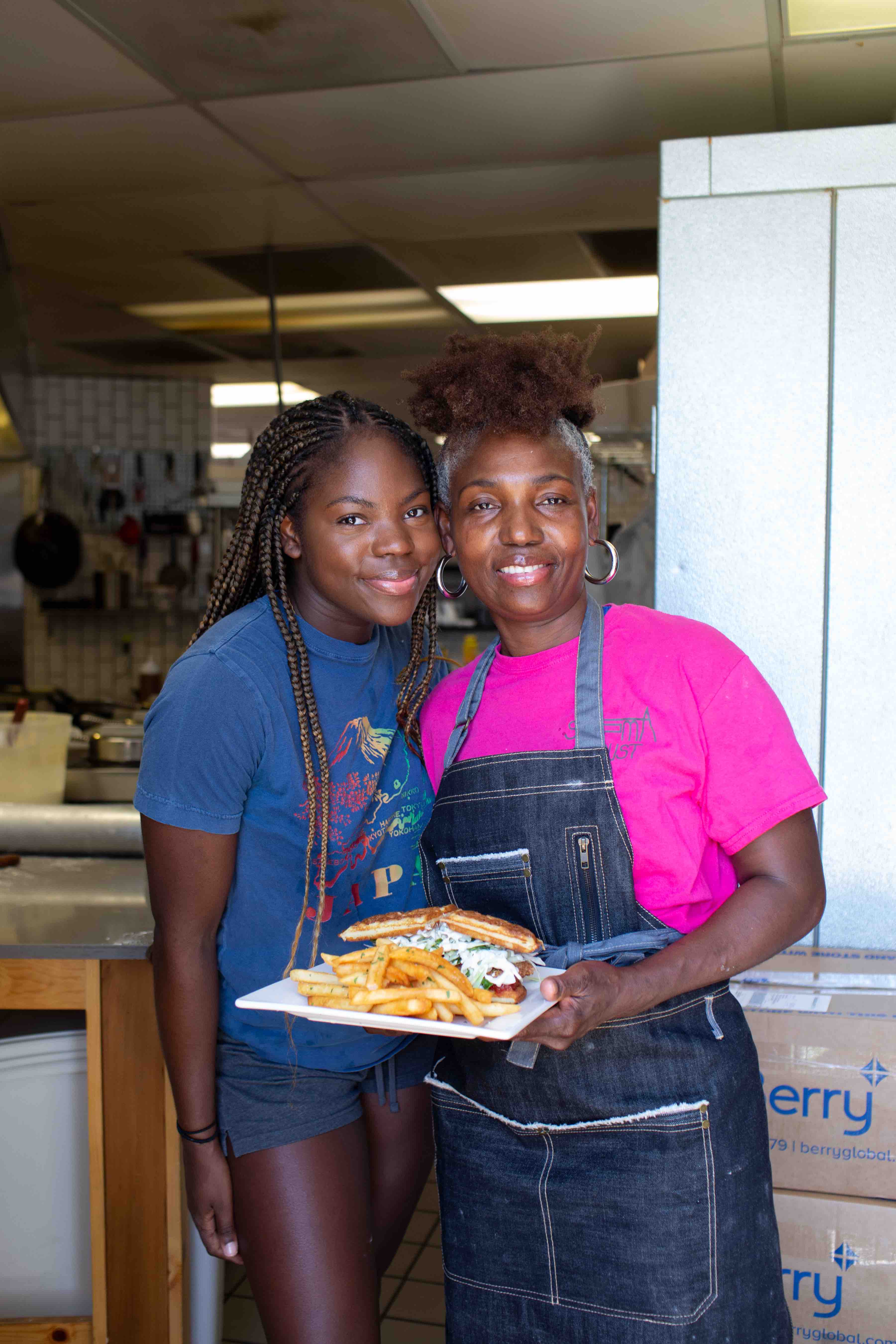 Although the volume has increased tremendously, the quality of food and attention to detail hasn’t changed. “Sometimes people don’t understand why they have to wait so long for their orders, how much we have to do to make it just right,” says Anne. “I have gotten complaints about the wait, but I have never had a complaint about the food.”

In response, Anne has pared down the menu to fried chicken, waffle sandwiches, and beignets only on Sundays, and will be adding a new rice bowl of tomato confit and black beans with a myriad of toppings and sauces to appease those looking for vegan and gluten-free options. And with no room to grow in their Dutton Avenue kitchen, Anne is focusing her future efforts on the bright pink vintage 1948 International dump truck that she has converted into a fully functional mobile, wood-fired pizzeria, with plans to also build an accompanying beer truck. 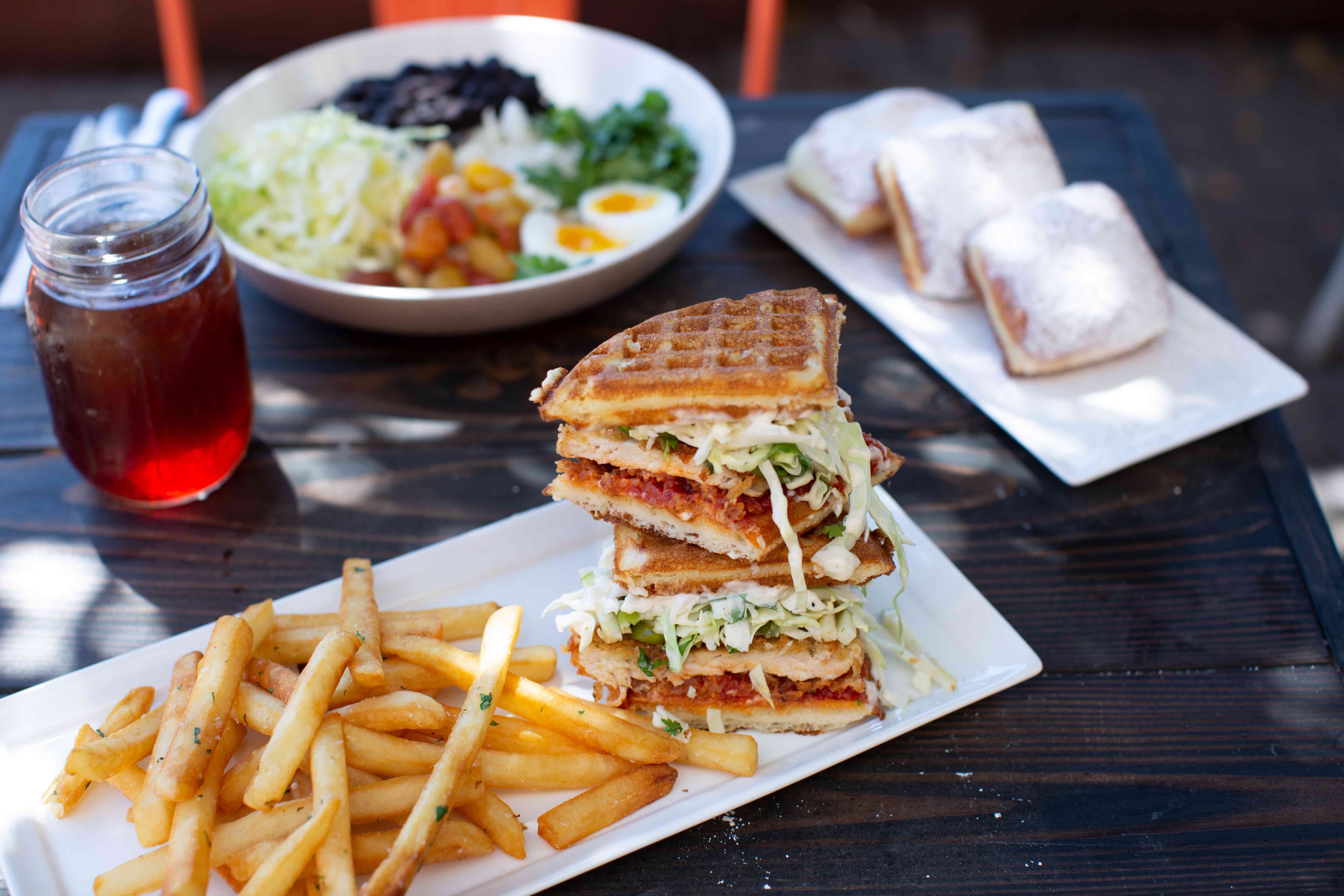 Anne now has two employees to help with front-of-the-house duties, yet she is still the solo kitchen dynamo. Even if she was able to relinquish control of the food (she can’t) or was capable of taking a break (she’s not), the tiny kitchen will not allow for it. When I ask her how many hours she works in a day, she demurs, “Oh, it is embarrassing, I don’t want to say,” but with some cajoling she admits, “I am sure there are days when I am there 18-20 hours, easy. It is just the way it is, but I love what I do so it is not a problem for me.”

In addition to the cooking, Anne not only designed but also built by hand everything in the shop, including the custom, nine-foot-long, marble-topped prep table where she works her magic. “In a small space, everything needs to be custom. And when you run out of money, you have to be inventive. I had never built a table before. Thank God for YouTube!” She adds, “This is the beauty of this industry and working for myself. Today, I was dreaming of something, and tomorrow, I can make it happen.” 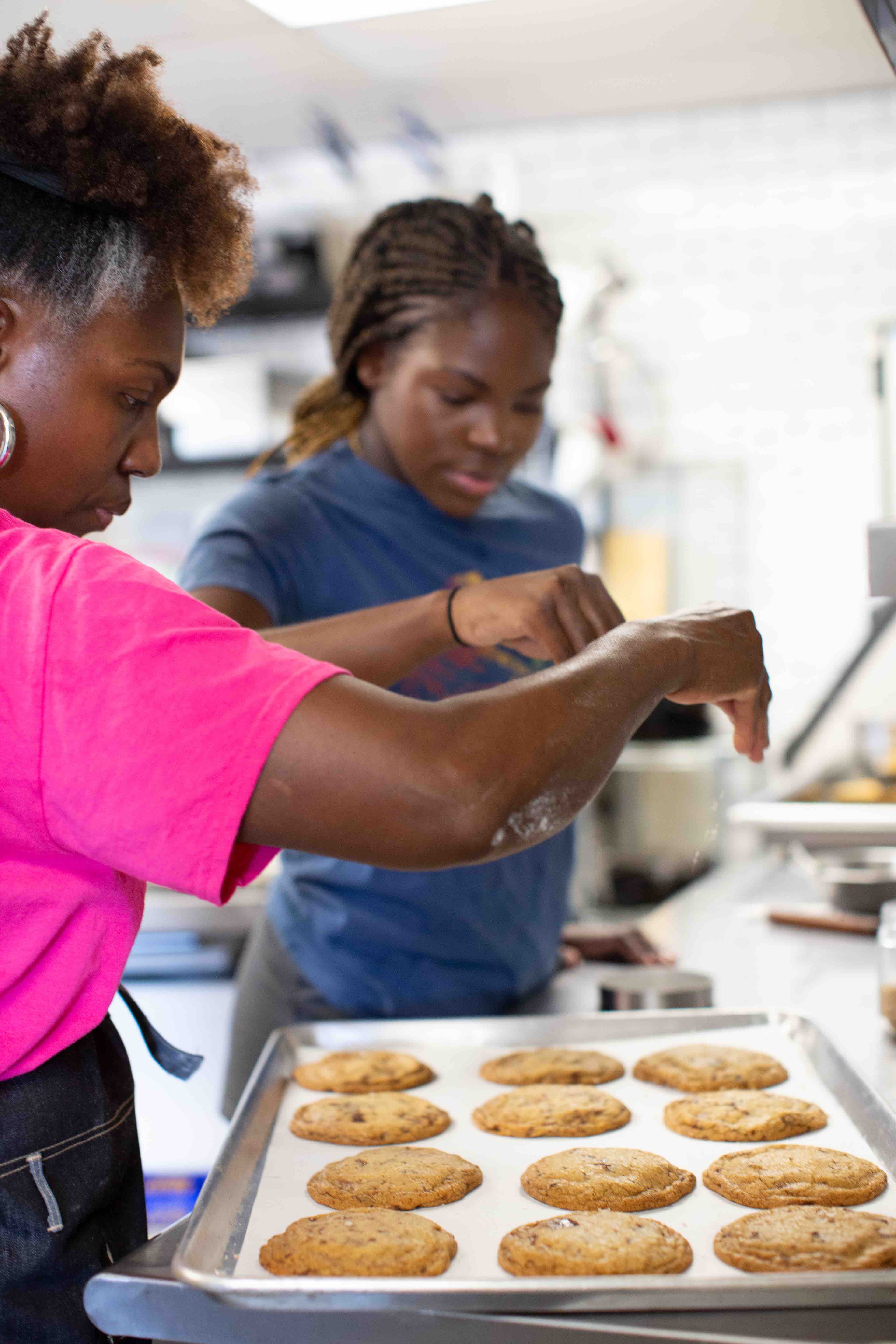