“Can I bring you a healthy vegan meal?”

Charles White asked his long-lost junior high friend, Lisa La Donne, who was hospitalized with a ruptured spleen. She said yes, and that was the first flutter of Cozy Plum Bistro, Santa Rosa’s first 100 percent plant-based eatery, which opened their doors March 10 of this year. 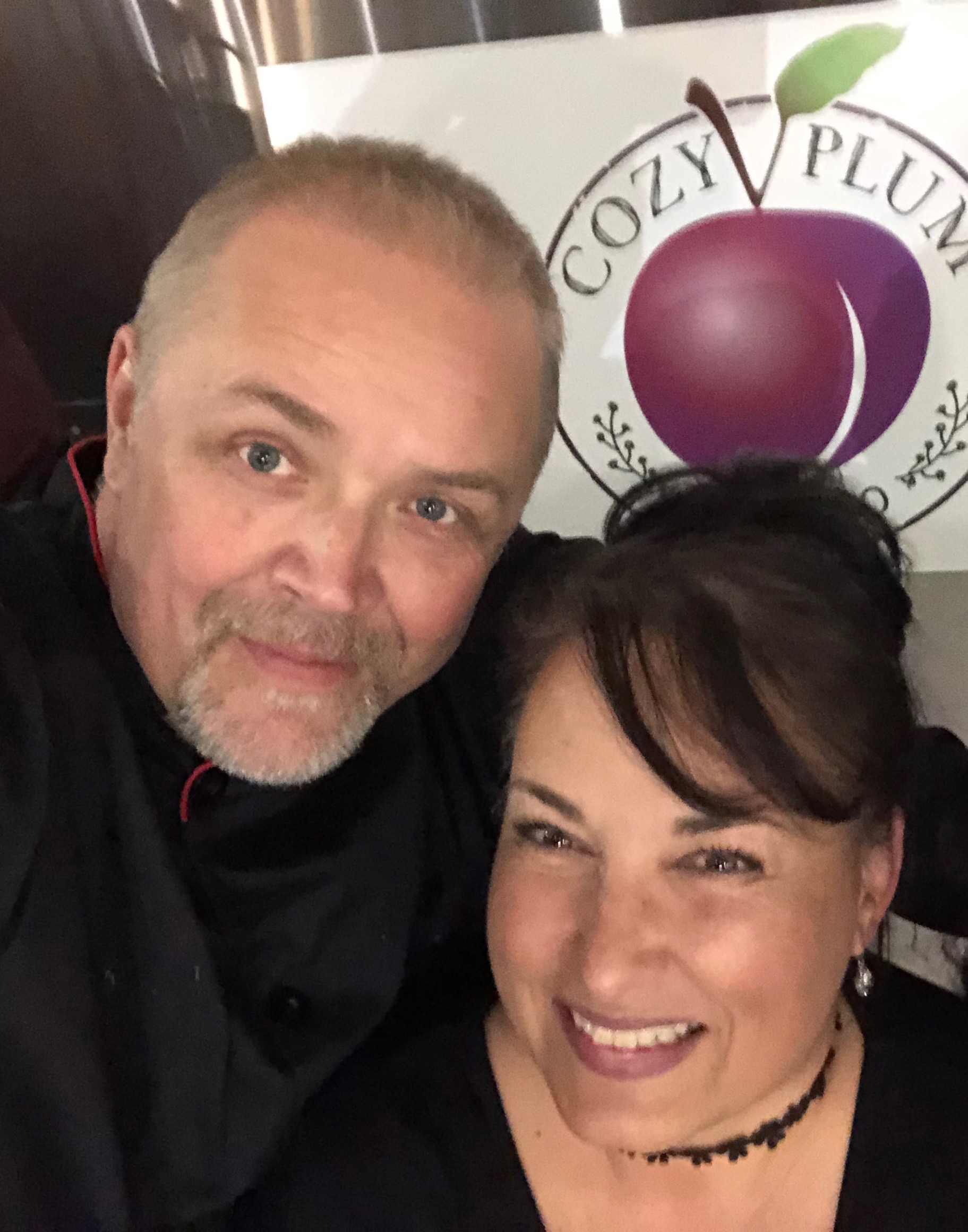 Sitting six feet apart inside a dimly lit Cozy Plum, with all the tables and chairs askew and the only activity coming from people in masks walking up to the door to ask questions or pick up an order, it looks more like a restaurant after hours than a thriving new business. La Donne flashes back to the point her health was in total crisis: “From July until November I’m in and out of the hospital. I’m in sepsis and I’m about to die, and then I get a message from Charles.”

La Donne, the self-proclaimed “face of the business,” is also a social studies teacher at Willowside Junior High. Her partner and head chef Charles White was diagnosed in 2013 with congestive heart failure and diabetes, and two years later converted to a plant-based diet. According to La Donne, when White reached out,“He was just starting down the path of veganism and not taking meds anymore and feeling passionate.” White had already been in the restaurant business for years, and the shift to vegan cooking led him to taking classes at the JC, watching and reading anything he could on this new style of cooking. His son Julian also got caught up in the fever and works side by side with Charles in the kitchen.

“The piece that is huge is the goodwill of the location. People knew you could come here for vegetarian food,” La Donne says, speaking fondly of Gaia’s and Govinda’s, the two former occupants of the building. She also says she hit the jackpot with their neighbors (and the owners of the building), Community Market. When she catered their Christmas party at the Santa Rosa location and announced her new plant-based restaurant, people had tears in their eyes.

“It doesn’t matter if you are here for the animals, or the climate, or to feel better in your body,” La Donne tells me in response to my questions about the politics of being vegan. “Any and all! Do it a little bit, do it a lot. Indulge or be mindful. Everyone is welcome here,” she says with a smile. 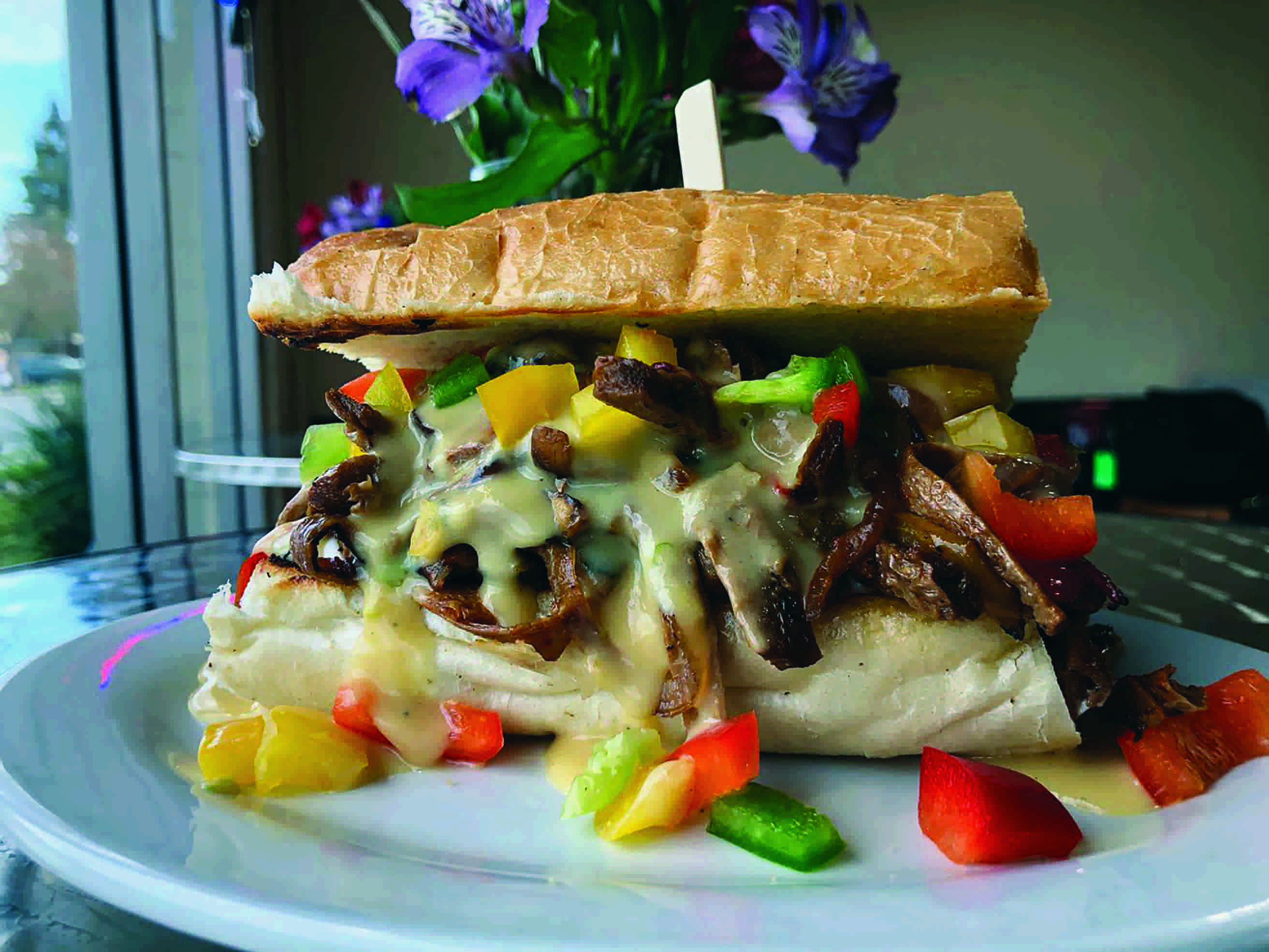 I also learn that when you try to substitute meat or cheese with an imitation product, it’s called a “transitional food.” “I’m what they call post-transition,” La Donne tells me, explaining that at some point you don’t really crave the coconut cheese or Beyond burger anymore. But for meat eaters or vegans new to the game, these “transitional foods” can be a lifesaver for folks craving something they are familiar with. This is part of the reason for the “comfort food” choices on their menu: creamy mac and cheese on fat Toscani pasta curls and cupcakes so soft and indulgent they could incite a brawl. It’s no wonder business has increased every week since they opened.

“We really don’t want to be known as fast food,” La Donne tells me. “And that’s been a hard transition because when you drive up to a curb, it feels like you are driving through. But all the sauces and everything are made here,” she emphasizes, adding that their produce comes from FEED Sonoma. White also has grand plans for a menu that converges with the practices of Santa Rosa’s True North Health Center (a plant-based clinic here in town).

As groups of college-age kids walk up to the doors to take a peek at the menu, La Donne tells me they even have a night club permit and are hoping to eventually have bands on the weekends. “My parents eat here once a week,” she says, breaking into a smile. “My dad brought his bowling friends and they are social distance eating at the bowling alley with Impossible Burgers.”

I think back to the meal my family ate from Cozy Plum: eco-friendly to-go packaging, grapes as the side on the kids’ meals, and burgers as big as your head topped with locally sourced, organic produce and lovingly made sauces. And it’s clear to me that Lisa and Charles have the right idea: Any and All. Just like its name (a nod to our famous Santa Rosa stone fruit), Cozy Plum has its arms wide open to anyone who wants to come in and enjoy their comfort, hospitality, and commitment to the community.