Ode to the Local Walnut 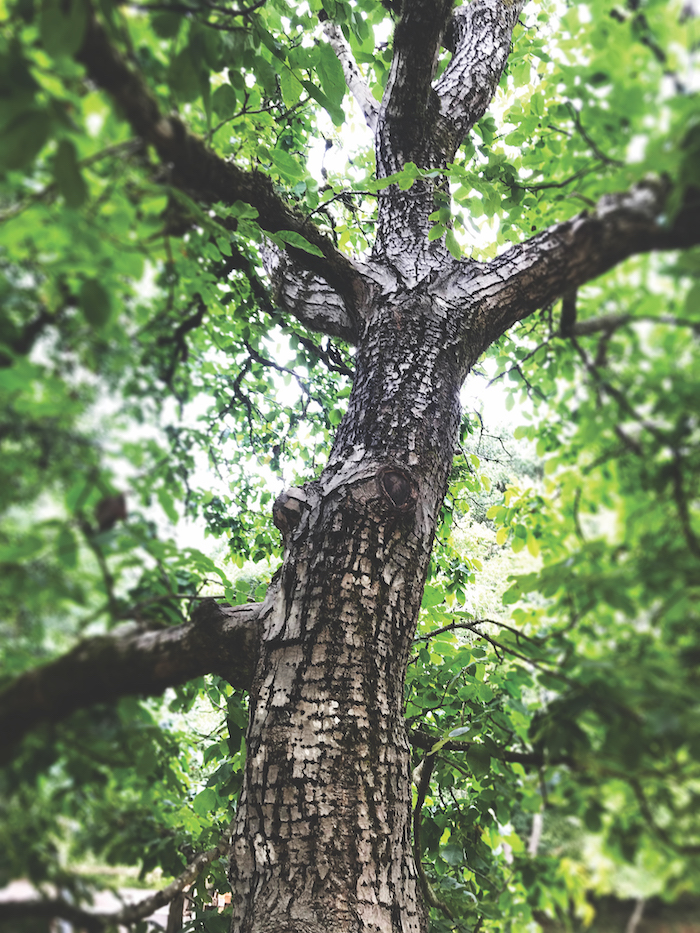 I am by nature a forager. No matter that I come from several generations of farmers and ranchers. Give me a tangle of inky blackberries, a patch of ephemeral miner’s lettuce, and I begin to know the land. This autumn, I found myself falling for the Sonoma County walnut.

As a child in Healdsburg’s Dry Creek Valley, I remember the passage of summer into fall as one accompanied by the muffled music of walnuts. The rattle and clack of what we called English walnuts, divested of their odorous green husks, rolling to and fro on the table. The strong-as-stone California black walnuts, determined to hold onto their booty, were left largely to the crows, who dropped them from great heights onto the empty road. I remember the sound of the birds jostling for the released kernels.

Do you know the walnut? Would you recognize it on the street during your daily walk? As vestiges of old ranches, abandoned promenades, and the hallowed sites of native villages, the trees remain and grow, delivering their twice-cloaked offerings every year. When you see their fruits on the ground, look up.

If the tree above you has floppy, oval, avocado green leaves, it’s an English or Persian walnut (Juglans regia). This tree is the result of an ancient hybrid, tracing back to our shores 35 to 45 million years ago, contrary to long-held belief. This is the nut you eat in ivory handfuls, subtly sweet, easy to crack.The naked kernel is shaped and fissured like a brain, to which it has been compared for centuries.

But if the leaves are smaller and resemble long paring knives, arranged in opposite rows, it’s a California black walnut ( J. californica or J. nigra, or a cross of both). Bend down to pick one up. If it’s early in the season, the black shell will still be encased in a yellow-green husk; that husk is the carrier of walnut’s deepest secrets. By October, it will have blackened and split, releasing an aromatic sepia-black ink that will stain your hands and seem untranslatable into food, drink, or curative godsend.

I found the history of the walnut to be littered with good language. My first stop? Maude Grieve’s indispensable A Modern Herbal, now nearly 100 years old. “The fruit, when young and unripe, makes a wholesome, anti-scorbutic pickle, the vinegar in which the green fruit has been pickled proving a capital gargle for sore and slightly ulcerated throats,” Grieve wrote.

A recipe from 1688 recommended running a “kniting pin” through the “green nutts” in order to make sure they were soft enough before preserving. All parts of the tree were used: for colic, herpes, eczema, head wounds, myriad infections, worms, and one of the most beautiful—and formidable—dyes in the world. 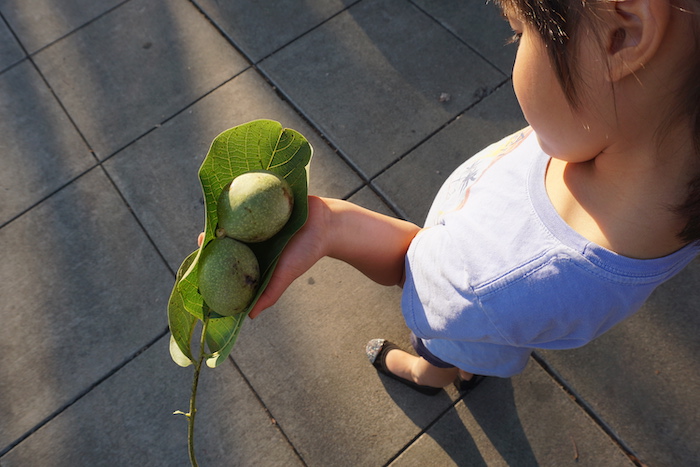 When I appeared at the Petaluma Museum’s Historical Research Library, walnut-eyed, the volunteer staffers were stumped. “No one has ever asked us about this before!” A buoyant search ensued, turning up evidence that Sonoma County was once practically covered in walnuts. San Francisco articles exclaimed over the crop’s profitability and suitability to “dobie” (adobe) soil; early 1900s real estate brokers excitedly urged buyers to “plant walnuts between the vines and on the balance of the land and have an independent income from the vineyard, chickens, and other products while the walnuts are growing.” Wait, what? Have a side income from a few grapes while you’re waiting for your walnuts? This was hardly the Sonoma County I thought I knew.

As I worked on this piece, walnuts began to appear to me from the sidelines. I brought them back to my house, in varying stages of ripeness, blackness, smelliness . . . and I just hung out with them. Though I consider myself a poet, the smell of the ripening walnut evades me in language.

Bruised lime? Hungover nutmeg? I held a mottled, squishy one up to my husband’s nose; he paused a moment, and simply said, “Like playing in the leaves on a fall day.”

Soon walnuts found their way to my bedside table, my purse, my car’s cup holder. I got to see them reveal themselves, like funky butterflies. (I’d be lying if I didn’t tell you there were some bugs involved.) I made walnut ink, as I have done for years, boiling the husks on a camp stove in my backyard.

As I cooked, I cracked nuts with a massive rock, crinch crunch, and ate the bits like a crow. But I felt lonely. Where were all the other people using the fruits of these once-grand elders? 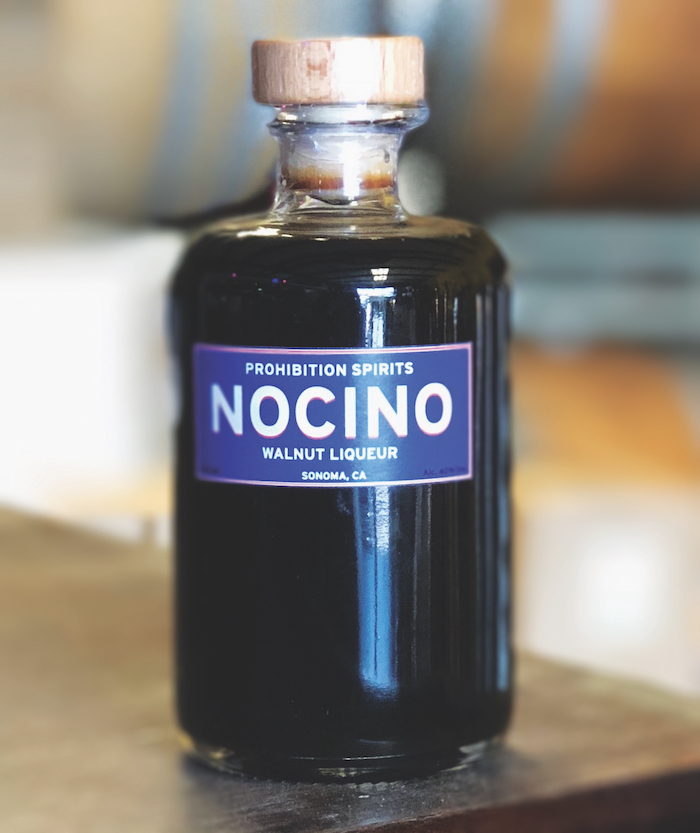 Enter Fred Groth of Prohibition Spirits, who makes one wicked Nocino. Being that my childhood window looked out on the site of an Italian bootlegger’s still, I was instantly drawn to Groth’s experimental vision, adapting traditional spirit recipes to his Sonoma environs. When I learned he makes a small-batch bottling of Nocino—an Italian, botanically-infused liqueur typically made from unripe English walnuts—I hightailed it over there, via backroads strewn with the largest walnuts I’d seen thus far.

“Five years ago, when I started making it, no one was interested,” Fred said from the bar of his tasting room outside Sonoma—no Nocino to taste because it had sold out long ago. “But there seems to be a renaissance happening, an interest in the bitter profile.” The walnuts for Nocino, which is called vin de noix in France, are in Italy ritualistically harvested on June 24th, the midsummer day of St. Giovanni. Fred has stuck to this.“We didn’t make it last year because we were out of town,” he said.

The soft green fruits, just beginning to form a nut inside them, are shredded, rolled with sugar, and packed into glass crocks to absorb five days of sun—this much I’ll tell you. The rest? Well, I’d rather you drove over there yourself once the newest batch is released. Groth hopes this will be on the traditional date of November 1st, All Saint’s Day. When I pulled up at his distillery, 50 feet from the tree that offered its fruits for this year’s batch of Nocino, there was a two-year-old apothecary bottle waiting, filled with a liquid the color of ink, smelling of spice and deep autumn leaves. I brought a tiny glass of it to my nose, repeatedly.

Where to encounter local nuts (besides just about every street)

• Visit the magical Gold Ridge Experiment Farm and sit under the very walnut trees that plant-breeder Luther Burbank tended in his famous experiments. The rootstock from his Paradox walnut is still widely used today.

• Cross your fingers for the pickled walnut vinaigrette (made from cured and roasted Santa Rosa walnuts) and the traditional Egyptian muhammara red pepper-walnut spread at Pearl Petaluma.

• Ask if they have any black currant walnut baguettes at Della Fattoria.

• Dine at James Beard-nominated El Molino Central this fall, where I was promised Chiles en Nogada, the celebratory Mexican dish featuring a creamy sauce of the nuez de Castilla, would appear.

• And, of course, stop by Prohibition Spirits on Nov. 1, and pray for the Nocino.