Humberto Castañeda Produce is the largest grower of vegetables in Sonoma County – and they are struggling to survive. 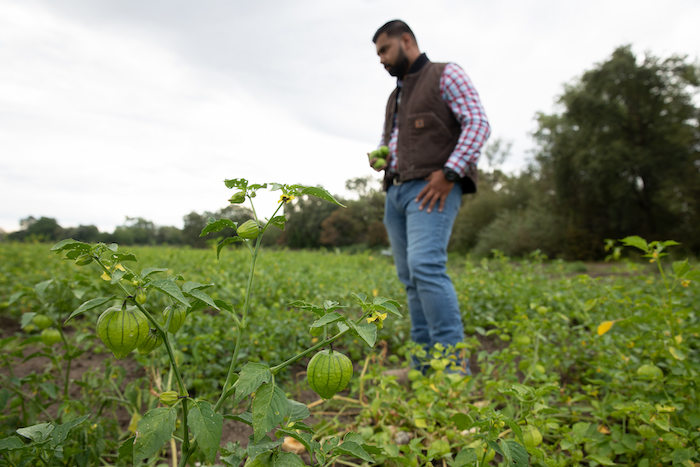 Humberto Castañeda Produce lies next to a particularly fast stretch of River Road between Santa Rosa and Forestville. I miss the turn on the first pass, just glimpsing the numbers of the address as I whiz past in my car. When I finally make it down the dirt road to the farm, partially hidden by a stand of wizened eucalyptus that has seen better days, I’m surprised by acres and acres of row crops stretched far into the distance. First, squash. Then, sweet corn, followed by a dozen varieties of tomatoes. And that’s not even the half of it. The Castañeda family has been farming in the Russian River Valley for more than 40 years, growing 170 acres of row crops. This makes them one of the largest, if not the largest of their kind in Sonoma County.

I park next to an outbuilding with a tall, metal roof but no real walls. Dozens of buckets of zucchinis, lemon cucumbers, and pickling cucumbers wait to be packed into cardboard boxes. A woman in a black T-shirt moves zucchinis from bucket to box, her eyes never straying from the task, hands moving with lightening speed. It’s one of many boxes to be filled today.

A few minutes later Gabriel Castañeda greets me, taking a pause from grappling with a broken water line. Gabriel, 26, is the right-hand man to his father Humberto Castañeda. With his boyish face and well-groomed, close-cut beard, Gabriel looks the very cross between farmer and businessman.

After a quick handshake, we jump in his truck for a tour of the farm. Within minutes, it’s clear that Gabriel is well-versed in the granular details of the day-to-day operations. He points out more row crops: poblanos, jalapenos, Patty Pan squash, tomatillos, zucchini. He stops to explain something in Spanish to a man driving a tractor. In between, Gabriel talks frankly about the challenges of farming in the county. Water, fertilizer, land, and labor costs have continued to rise. Yet, the price of a pound of zucchini hasn’t budged much at all since his father began farming in the 1970s. Plus, produce can be bought cheaper when it’s been grown in places like Mexico, where the labor and land costs are significantly less.

“We’re not sure if we’re going to do this next year,” admits Gabriel. “It’s been a rough year. We’ve asked ourselves, ‘What are we doing? Should we continue this?’ It’s come to that. We want to continue farming, but it’s just getting harder.”

Humberto Castañeda, 62, takes a break from taking client calls in the cab of his white truck, a task that takes up most of his mornings, to talk with me. His clients are the buyers at the large wholesale produce markets in San Francisco and Oakland. His phone dings with messages during our conversation. 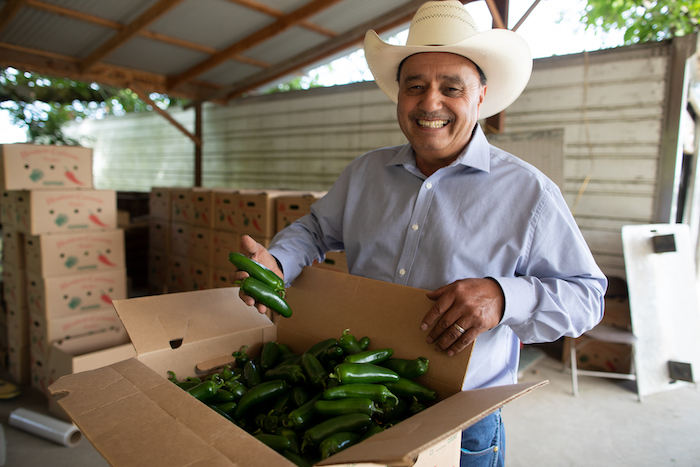 Wearing a light-blue, button-down shirt tucked into jeans, Humberto has an open and friendly demeanor. When he moved from Michoacan, Mexico to Sonoma County in 1975, he didn’t intend to start his own farming business. He found work in restaurants and other people’s fields. But it was hard to make a living, and he knew how to make a go of it on the land after watching his father and grandfather farm back in Mexico. In 1978, he and his two older brothers launched Castañeda Brothers Produce with 10 acres off Laguna Road.

The business came naturally to him, and he thrived, even after splitting from his brothers in 1988 to start his own operation. It was easier back then, he says. Labor was cheaper. So was housing. He and his wife Maria farmed more and more land until they reached the 170 acres of today. They also bought property in Merced, where Gabriel was born in 1993. But it was hot there, and they missed Northern California. The family returned to Sonoma County and two more daughters were born. Only Gabriel has chosen to pursue farming full-time, though his older brother Humberto Jr. helps when needed.

“I grew up on the ranch,” says Gabriel. “My entire life was here.” Now, he brings his own children, ages 1 and 4, to ride around on the tractors and experience life among the crops. 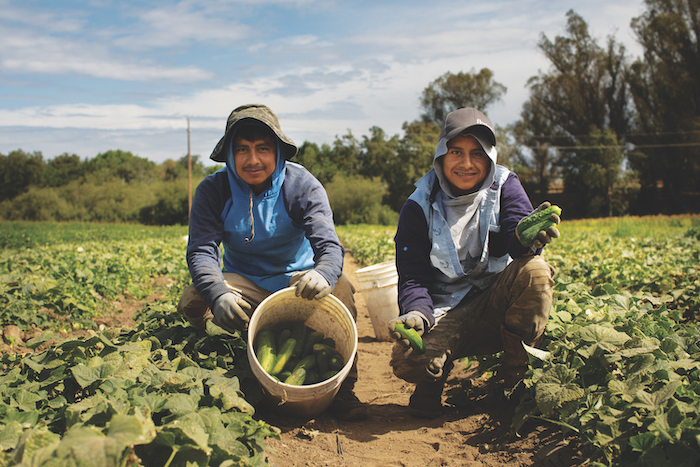 Labor, finding and keeping workers in a region where the cost of living has skyrocketed, has become the farm’s biggest challenge. Everything on the farm is hand-picked. In summer, some fast-growing crops must be harvested every day. Up until six years ago, they got by on local labor. But the available pool trickled down to two or three people when they really needed seven or eight workers a day to get everything done.

“No one wants to do this kind of back-breaking work,” says Gabriel. “People say, ‘Why don’t you get local workers?’ Well, we tried.”

That’s when the Castañedas turned to the H-2A Visa program, which allows businesses to bring foreign nationals into the United States to do temporary or seasonal agricultural labor. The workers, mainly from Mexico, are paid $13.92 an hour. They’re also given housing nearby. They started with eight workers in 2014 and now it’s up to 30. Forced competition with grape growers has also been a factor in the labor shortage. Paid more for their crop, grape growers can afford to pay workers $17 to $18 an hour.

“We can’t pay that,” says Gabriel. “What we grow isn’t worth that much. If it wasn’t for the H-2A program, the farm might have already gone out of business.”

Eight years ago, the Castañedas transitioned 15 acres of row crops to grapes. They sell to local companies like Sonoma-Cutrer and Constellation Wines. Last year, they invested the profits from the grape harvest into 57 acres of almonds in Merced County. The almonds can be harvested almost exclusively by machine, eliminating the need for hand-picking. 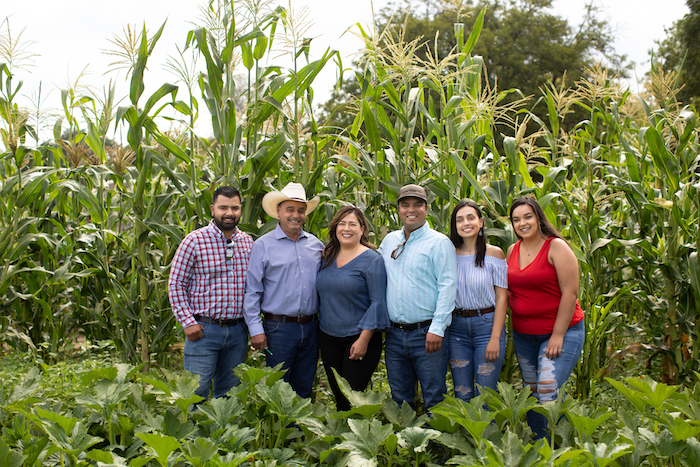 The move into grape and almond growing is strategic, a buffer against the shifting tides of the economy and the government. If the row crops don’t pan out, they have a Plan B.

“I go out there [to Merced] maybe once a week, and I can run the machines on my own,” says Gabriel. “If I need hand labor, I’ll get a labor contractor and get it done in a couple of days. We don’t know what’s going to happen with the labor situation. We might not have the H2-A Visa program—and then what are we going to do? We don’t know what it’s going to look like in the future.”

For now, they sell 75 percent of their produce to Safeway. The other 25 percent goes to the big wholesale produce markets in San Francisco and Oakland, and local markets like Andy’s, Big John’s, and Rancho Mendoza. They also have a booth at the Windsor Farmers’ Market.

If he had it his way, he’d continue growing vegetables for years, says Humberto. It’s what he knows. He can’t necessarily “pivot,” in the parlance coined by tech companies. Although diversifying into less labor-intensive, high-value crops might be seen as the farmer’s version of pivoting.

“My dad has been doing this forever,” says Gabriel. “He can’t change his profession to something else. This is what he’s done his entire life. He knows what to do. He has a huge passion for it. He loves doing it.”

“I am the biggest grower of veggies in Sonoma County,” adds Humberto. “People from the area like to buy our products. They want local products. That makes me feel good.”

Still, it remains to be seen if community and a long-standing passion for farming will keep the family in the vegetable business—especially with the forces of economics and politics as they stand.

Adventures in Drinking: The Elephant in the Room