Bagels are Having a Moment

You no longer have to trek to New York from Sonoma County to have an authentically delicious, boiled bagel.

Gone are the days when I thought of bagels as innocuous, round vehicles for cream cheese. On the contrary, these Jewish classics (which date back to 17th century Poland) are steeped in lore and actually quite controversial. Though they were sometimes called “cement doughnuts” or “Brooklyn jawbreakers” in late 19th century New York because of their propensity to go stale, myths persist that the city’s soft water is what makes them superior. 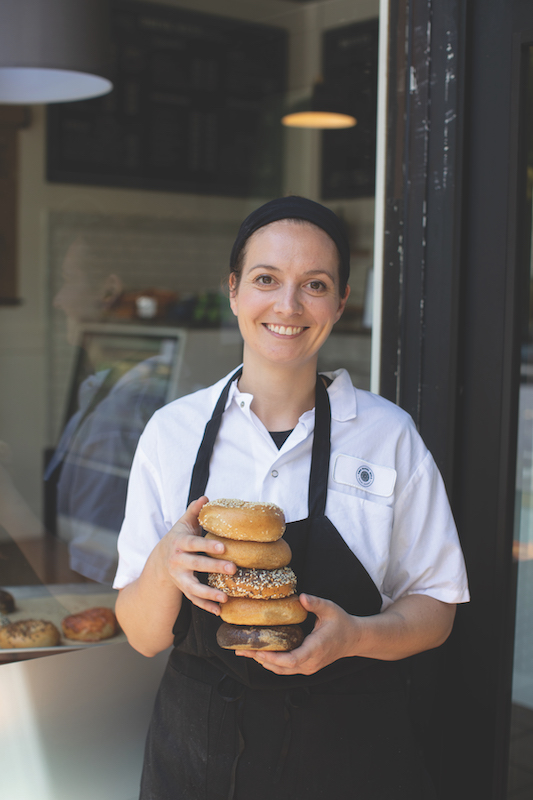 “Producing your own bagels is like selling barbecue,” notes local restaurateur Mark Stark. “Every customer is an expert, and everyone has an opinion. Should a real bagel have jalapeños and cheese in it? Risky business.”

Glenda Dougherty, who owns The Bagel Mill in Petaluma, agrees. She adds: “But that’s the beauty of bagels.”

Regardless of where you stand on Stark’s question about the marriage of jalapeños and bagels—he’s a firm no, but Dougherty is game—one thing is for certain: Bagels are finally having their moment here in Sonoma County.

Read on for Made Local Magazine’s round-up of where to nab the best of these shiny toothsome rings.

If you’ve bought into the idea that bagels are not a healthy breakfast (or that no one in California can make a decent bagel), head to The Bagel Mill in Petaluma and let Glenda Dougherty change your mind.

Dougherty’s bagels begin with whole grains and wheat, stone milled daily, to which she adds a five-year-old sourdough starter. After proofing, shaping, resting, boiling, and baking, the bagels are ready to go more than a day later.

“I think the gluten-free movement is more a response to instant yeast and processed white flour,” Dougherty explains on an afternoon in July, as she lights up over the “beautiful” properties of wheat germ, the oily seed that makes true whole wheat both moist and perishable. “We’re doing it the slow way and our way.”

Purists may take issue with Dougherty’s approach—“Every time you make a bagel,” she notes, “you’re setting yourself up for comparison”—but it’s hard to see how. My whole wheat everything embodies everything a bagel should be: glossy finish, firm bite, and a wonderfully chewy middle. The tangy sourdough (which also makes it easier to digest) perfectly offsets the rich avocado and crisp lettuce of my BLAT. 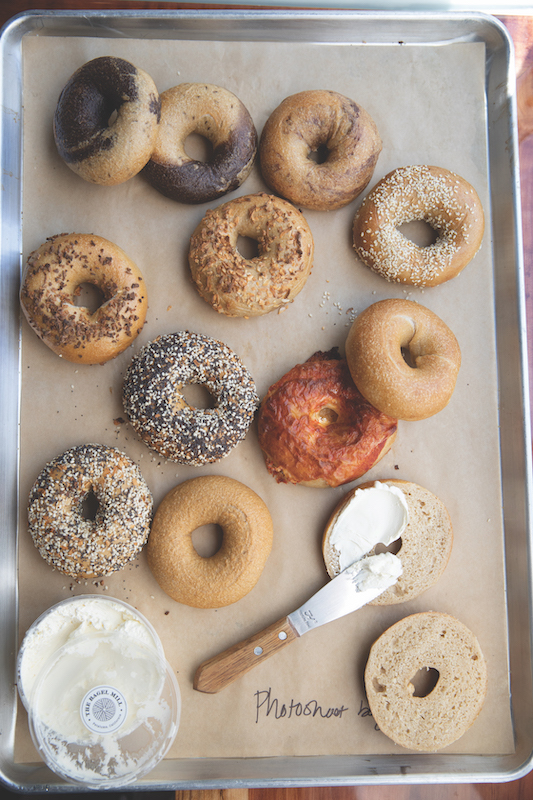 And I’m not the only one swooning. It’s noon on a Wednesday and The Bagel Mill, which sold out during its first week in early July, is buzzing with customers. In the site of a former sushi restaurant on downtown Petaluma’s Western Avenue, the airy, unpretentious shop features antique postcards and newspapers (one dated July 14, 1883) from California’s wheat farming days.

“Petaluma used to be a mill town and I’m trying to bring that back a bit,” Dougherty notes. Behind the pantry window sits her striking red stone mill—which keeps the wheat berries cool, thereby preserving the vitamins and minerals during the milling process. Dougherty takes a fistful of einkorn (the oldest wheat known to scientists), and together we marvel at its fine soft texture.

“It’s fun to get to work on improving something every single day,” says Dougherty, whose idea of fun, remarkably, involves showing up for 2am bakes five days a week. She describes her bagels as “New York-inspired with a heavy California influence,” a reflection of her Sebastopol upbringing and six years of living in New York City. After gaining experience in fine dining, she started Red Dog Baking Company with a friend in 2017. Buoyed by the popularity of her whole wheat bagel, she decided to go all in. While she’s still figuring out how to balance baking and running a business, her friends and family are pitching in, including boyfriend Michael Manning, who manages the front of the house.

Dougherty currently offers 12 flavors (all the classics, plus surprises like marble rye), sandwiches that will please carnivores (pastrami Reuben, smoked trout salad), egg lovers, and vegans (house-made cashew cheese). She doesn’t bake them herself, but she offers gluten-free bagels from Mama Mel’s Bread and naturally gluten-free goodies like overnight oats and a seasonal frittata. And, in a nod to her hometown’s Grateful Bagel: “I had to put pizza and pesto bagels on my menu,” she says with a grin. 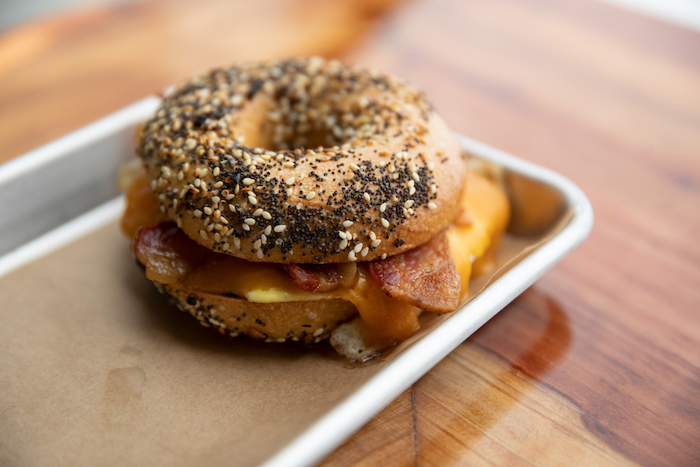 They’ve mastered steaks, oysters, tapas, and the happy hour menu, so it’s no wonder Sonoma County’s most prolific restaurateurs, Mark and Terri Stark, are joining the bagel scene. Grossman’s—named after Terri’s family name which was shortened to “Gross” upon arrival in the U.S.—is set to open this fall in Santa Rosa’s Railroad Square.

“The house-made bagels are a byproduct of our desire to open a classic Jewish deli,” explains Mark. “Terri and I feel there’s an opportunity to recreate some history.”

By classic he means, of course, with their signature spin: expect some Israeli and Mediterranean flavors, a full bar, and dine-in or take-out options.

“I’ve personally been researching bagels since I could chew,” he quips. “I’m an East Coaster, and we all know that makes a person an aficionado of sorts on all things bagel: chewy or fluffy, toasted or not toasted, seeded on both sides or just one?”

Over the past six months, the Stark’s traveled both coasts, researching and tinkering with endless recipes to come up with this: “A bagel that is a cross between a good Brooklyn bagel and its chewier cousin from Montreal.” He’s the first Sonoma County bagel shop owner to mention the “rip and dip” technique, which seems like a promising way to get more cream cheese per square inch.

“Our bagels will be made with Brooklyn water,” Stark claims, “but, for now, we are keeping that trick a secret!” (Read on to page 15 for the big reveal.)

“I wanted to come up with a bagel that had a bit of both coasts. I’m from the East Coast, and everyone knows that the water is one of the reasons that New York City bagels are so good.

Terri’s from the San Francisco Bay Area and what says San Francisco more than sourdough? Now, we can’t very well truck gallons and gallons of Brooklyn water in every week. So, on one of our research trips to Brooklyn, we smuggled some water back with us to use in our sourdough starter. That starter has been lovingly nurtured for the past six months, and I have to say that it’s making some really chewy, tangy bagels. Every one of Grossman’s sourdough bagels will have a little bit of Brooklyn in them.” 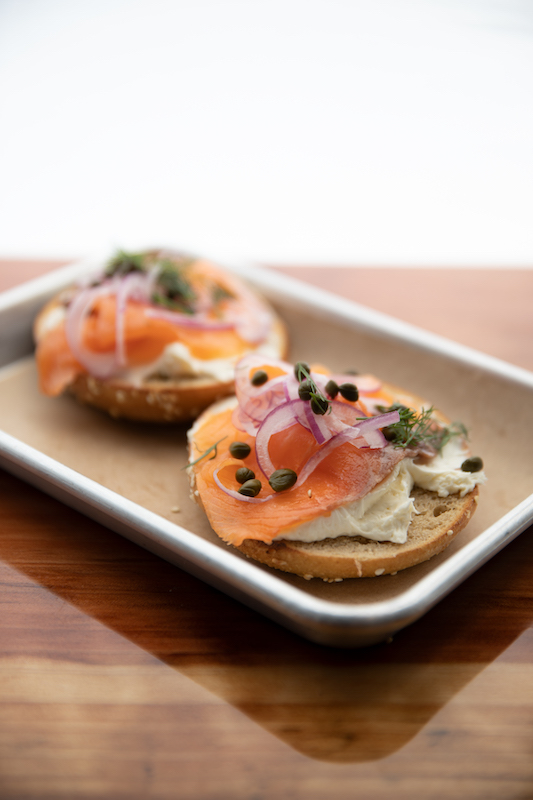 About seven years ago, Healdsburg resident and former psychotherapist Drew Ross was hosting his father-in-law for a visit. “We were bummed that we couldn’t find a real authentic bagel in Sonoma County,” he tells me over the phone, “so we made a batch.”

After years of tweaking and perfecting that recipe, Ross met local sausage maker Bruce Aidells through a contact at the North Coast chapter of SCORE, an organization that pairs veteran business pros with aspiring newbies. Inspired by Aidells’ success, Ross decided to follow his mentor’s lead and open a wholesale business rather than a storefront.

“Retail might come eventually,” he says, but for now he’s happy to avoid the “headache and overhead” and focus on building his year-old bagel business.

Like Dougherty, Ross boils his bagels—a crucial minute-long step that is often skipped by commercial bakers in favor of the easier steam-injection technique. The result of steam injection is a softer product that lacks texture, what Ross refers to as “a large piece of round bread.” Properly boiled bagels, on the other hand, give your teeth a little resistance—exactly what I found in Ross’s savory bacon Asiago bagel (along with a generous distribution of bacon bits).

As he continues to cut into the market previously dominated by chains like New York Bagels, Ross is responding to customer demand with new flavors and a bagel of the month. August is sun-dried tomato, basil, and mozzarella, and he’s considering a “French toast” option for September, with maple flakes, cinnamon sugar—and possibly bacon.

Find Ross’s bagels at the Healdsburg Farmer’s Market on Tuesdays and Saturdays, the Cloverdale Friday Night Live (where he also slings bagel dogs!), markets like Big John’s and Shelton’s, all six Acre Coffee locations and soon, the Santa Rosa Original Certified Farmers’ Market at the Luther Burbank Center. (I tracked mine down at the Buzz Cafe on the Kaiser Permanente campus on Mercury Way in Santa Rosa.)

No retail shop—see above for locations