With the opening of the second Noble Folk in Santa Rosa, Ozzy Jimenez and Christian Sullberg have established themselves as a new breed of young entrepreneurs. 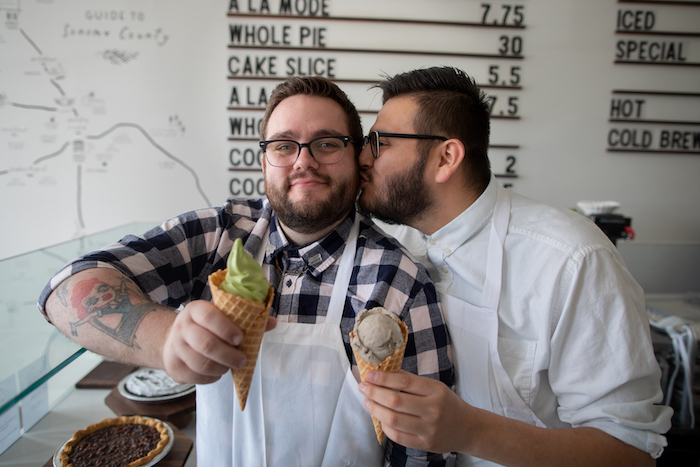 As the 2019 Women’s March winds down, a few dozen people remain in Santa Rosa’s Courthouse Square, carrying signs and dancing jubilantly to “Can’t Stop the Feeling” by Justin Timberlake. Osvaldo “Ozzy” Jimenez, tall and broad with a shock of black hair, lopes through the crowd. He greets my daughter and me with a warm smile before continuing across the street to Noble Folk, the ice cream and pie shop he owns with partner Christian Sullberg. Sullberg stands outside wearing an artsy tee and cut-off jean shorts, greeting the steady stream of people heading into the shop, one day into its soft opening.

It’s the fourth spot opened by Sullberg and Jimenez in less than a decade. The whole venture started in 2011 on the Healdsburg Plaza with Moustache Baked Goods, which swiftly got a boost after being featured on The Cooking Channel. Noble Folk, also in Healdsburg, followed in 2014. Two years later, they opened The Pastry Annex, an outpost in Windsor’s Artisan Alley, where an all-female kitchen crew knocks out product for the bakeshops along with the Wine Country wedding cupcakes that have become Moustache’s bread-and-butter. In January, after months of renovation and permitting work, the couple opened the second Noble Folk location in Santa Rosa.

With a bright, Scandinavian aesthetic, the new shop is ready made for Instagram: lush house plants soak in the light reflecting from the white-washed, exposed brick walls; sparkling crystals throughout match the ethereal vibe of Stevie Nicks wafting from the stereo; a minimalist bakery case displays a selection of three seasonal pies. In late winter, this means a Maple Chocolate Walnut and Strawberry Mississippi Mud pie with a heritage grain crust. The cake selection includes a Meyer Lemon Olive Oil made with heirloom citrus from Healdsburg. The ice cream comes in flavors like Black Sesame Coconut and (Tartine) Manufactory Coffee. And there’s matcha soft serve. 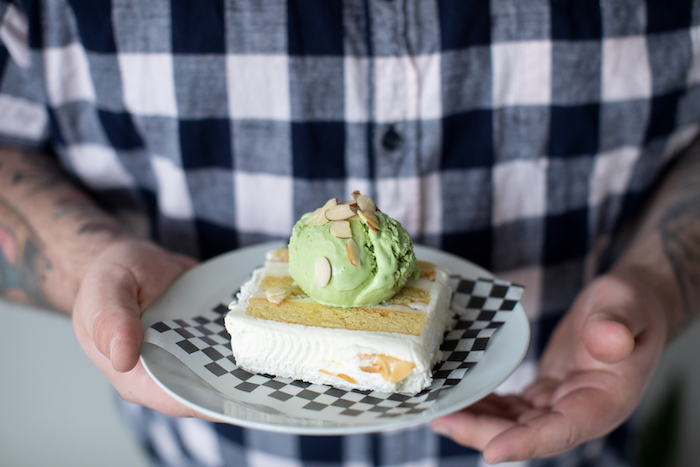 The journey to bakeshop owners has its lineage in a long line of family members who have worked in the food system. Sullberg was raised in Healdsburg by a single mom and restaurant worker. In fact, she was a manager at Cafe Portofino, the now-shuttered institution that was located in the storefront right next to the new Noble Folk.

“My mom would leave for work at 7am; I would be in bed by the time she got home,” says Sullberg, 30, when we meet at The Pastry Annex a couple of weeks before the soft opening. “She’s been behind the line in restaurants, working any position you can think of.”

Jimenez, 32, was born in Jalisco, Mexico to a ranching family that raised sugar cane, alfalfa, and watermelons. The early exposure to agriculture gave him a lived awareness of food system realities. “I understand it from the perspective of the person growing the food,” he says. “I want to showcase what farmers are working hard on. [Farming] requires grit and sweat.”

His family immigrated to the United States when he was a child. His father worked as a farmworker in the Central Valley before opening a carpet cleaning business in Sonoma County. When Jimenez was 13, his father became a U.S. citizen. “I lived undocumented for part of my life, which I didn’t know about until recently,” Jimenez says. 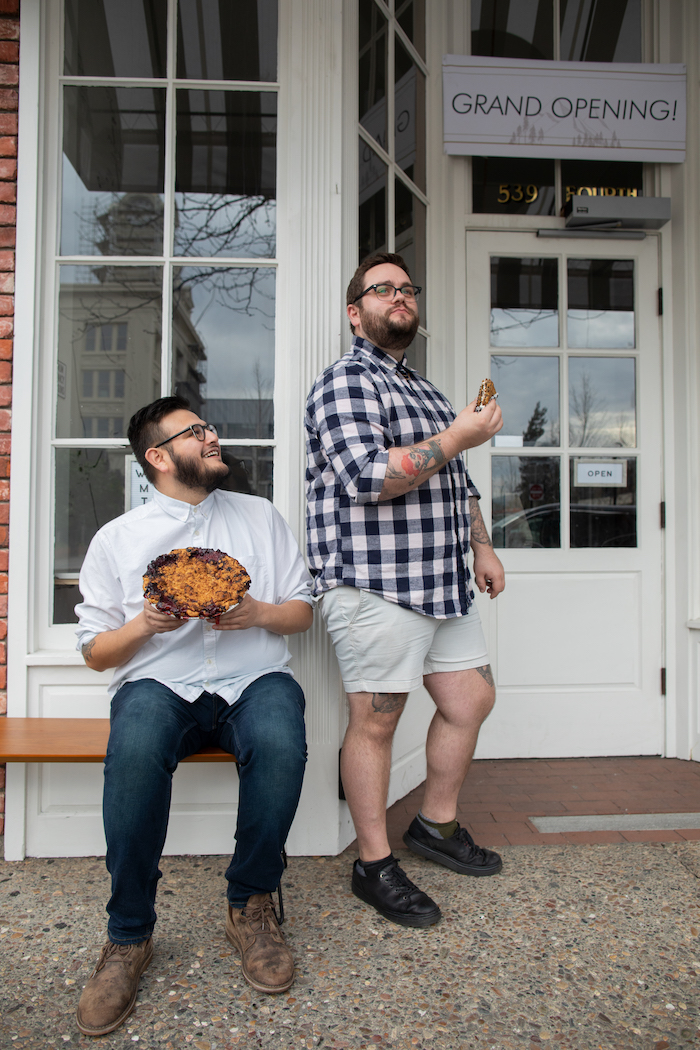 Opening a business in Santa Rosa is a homecoming, of sorts. He grew up here and went to Piner High School, and held his first job at Banana Republic in the Santa Rosa Plaza. He met Sullberg 10 years ago at Flying Goat Coffee on the other side of the mall.

At the time, Sullberg had recently moved home from Los Angeles. Down south, he grew to appreciate modern-style bakeshops—a contrast to the more traditional bakeries he’d worked in as a teenager. On his return, he couldn’t shake the idea of opening a dessert shop with a focus on seasonal, local, high-quality ingredients that celebrated small farmers and sustainable food culture. He even briefly took culinary classes at Santa Rosa Junior College but found that college wasn’t for him. On their first date, he spoke to Jimenez about this dream of opening a food business. It was a go from there They moved in together, visioning their future business over a desk made from a door salvaged from a vintage bungalow. Today, that door hangs on the wall of Moustache Baked Goods and features a map of local farms and purveyors (Dry Creek Peach, Front Porch Farm, Preston Farm) they support. To fund Moustache, Sullberg sold belongings on Craigslist. Jimenez convinced his parents to lend $15,000 in seed money. They were meeting as a family to decide how to honor the memory of Jimenez’ sister. She’d come out to him as LGBT on Christmas Eve, right before returning to college in Oregon; she passed away not long after.

“Me and my dad haven’t always gotten along, but we both speak the language of business,” says Jimenez. “I told them that with everything I had saved up and everything Christian had saved up—plus their loan—we could make it happen.”

His parents agreed to the loan and Moustache Baked Goods officially opened. In the early years, Jimenez and Sullberg worked every position in the shop. It was a skill they’d both learned from their parents, to be flexible and versatile and work hard. Plus, Jimenez felt driven by his sister’s memory.

“I couldn’t let this opportunity go away,” says Jimenez. “I couldn’t fail my sister.”

“We’re also scrappy young kids that fight,” says Sullberg. “We don’t have the luxury of letting our business not do well. We were working the front lines, rather than sitting up in an office, looking at data on a spreadsheet. We were actually listening to our customers.”

Dave Roberson, a tech entrepreneur, was impressed by the two’s “curiosity, openness, and humility” when he mentored Jimenez at the Stanford LatinX Entrepreneurship Initiative in 2015. What was slated as a seven-week mentoring session is going on three years.

“They have so much passion for the business, for the product, for the people who work for them,” says Roberson by phone. “Their level of maturity is impressive to me.”

Sullberg and Jimenez, in turn, have become mentors themselves. In addition to their 38 employees, they have helped other small business owners thrive. Just ask Alisse Cottle who owns Brew, a coffee and beer house in downtown Santa Rosa, with partner Jessica Borrayo. 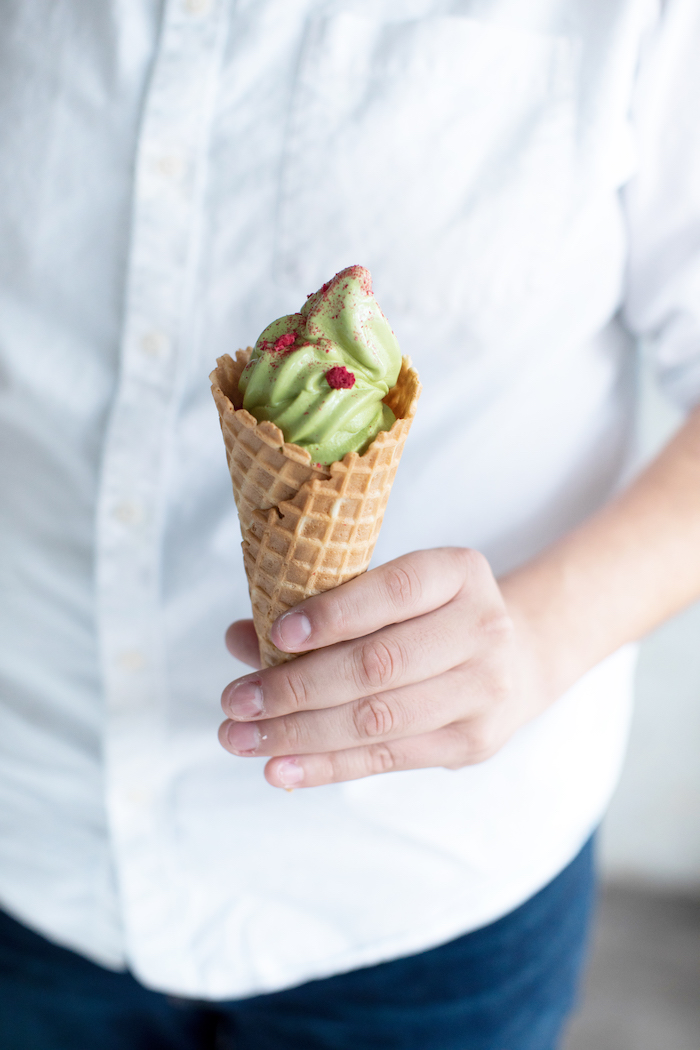 “Ozzy and Christian showed us the deep meaning of community instead of competition,” Cottle says via email. “Small businesses can easily get fiercely competitive because we are all just trying to survive. But they offered us advice and stories of mistakes and successes, and what worked best for them. The LGBTQ business community is even smaller than you can imagine, and by working together, we are all stronger.”

That sense of community spirit has only strengthened in the wake of the 2017 fires. When the wildfires hit, Jimenez and Sullberg had been looking to expand into Mill Valley. “We asked ourselves, ‘Why are we looking outside our community when we could be investing here in Sonoma County,’” says Jimenez. “That was the driving decision behind opening a new shop in Santa Rosa. It made us hold on tighter here.”

Along the way, they’ve embraced other leadership opportunities. In 2015, Sullberg began volunteering with Positive Images (PI), a nonprofit that provides mental health support to LGBTQ+ youth between the ages of 12 to 24. Before long, he was board president.

“After Noble Folk opened, we were doing well,” he says. “I could have just stepped back and hung out on the couch. But as much as I talk about community, I have to back that up. It was hard growing up LGBT around here and not having a big sense of community. As soon as I started meeting the kids, I knew we needed this.”

Inspired by Sullberg’s venture into leadership, Jimenez joined the board of Healdsburg Forever, which funds nonprofits in Healdsburg and Geyserville. In January, he was elected as a California Democratic Party Assembly District 2 delegate, a role that will see him participating in elections, ballot measures, and legislation.

“I’m not sure if politics is the end all and be all, but I want to make sure that LGBT and people of color have a seat at the table,” he says. “In Sonoma County, we haven’t always had equal representation. I think I understand the fabric of what’s going on here.”

Through it all, as it should be, there is always time for ice cream, pie, cupcakes, matcha, and coffee. And the sense of contentment that comes from establishing a business, and a life, in the community that raised them both.

“To be honest, we are kind of like country boys,” says Jimenez, flashing another one of those warm smiles in Sullberg’s direction. “We love our roots. We want to show everyone that you need to be investing in Sonoma County.”