How the Diaz family brought a matriarch’s mole recipe from Oaxaca to Healdsburg without losing a lick of authenticity.

The story of the Diaz family mole (pronounced mo-lay) begins in the town of Santa Gertrudis in the Mexican state of Oaxaca. At a young age, Octavio Diaz learned a love of good food from his grandmother, a talented home cook with a passion for quality ingredients. “She always had tricks up her sleeve to make things look and taste better,” says Diaz, the owner of Agave restaurant in Healdsburg. 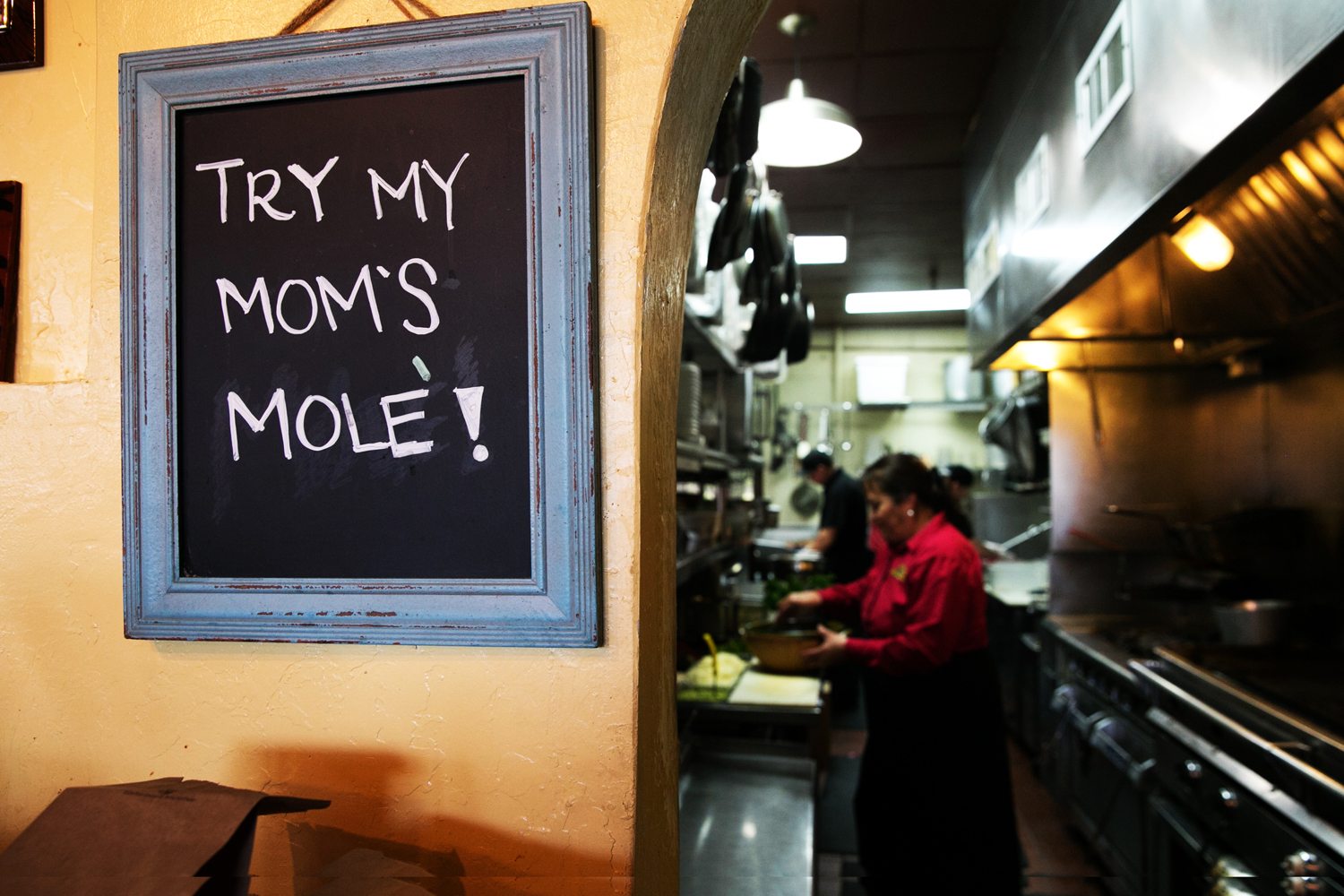 Like other local abuelas, for weddings, quinceañeras, and baptisms, the Diaz matriarch cooked up rich, celebratory batches of mole. It was a multi-day process of roasting, frying, and melding together seemingly random ingredients: chili ancho, chili guajillo, dark chocolate, tomatoes, plantains, day-old bread, and other sundry items. Eventually, she taught the recipe to her daughter Juana, Octavio’s mother.

When Juana and her husband Pedro immigrated from Oaxaca to Sonoma County in the ‘90s, the recipe came with them. When their son Octavio opened Agave restaurant in 2010, tucked between a Dollar Tree and a Safeway in Healdsburg, mole was on the menu. When their younger son Pedro opened El Farolito off the square, he also served the mole. They couldn’t not serve it. Mole was part of their heritage. It was in their blood.

On the day that I visit Agave, it’s pouring rain outside, but inside the restaurant is festive, thanks to brightly painted murals. Octavio wears a navy blue dress shirt and jeans over his stocky frame. He greets me with a fi rm handshake before launching into the Diaz mole epic, something that feels straight out of an Isabel Allende novel.

“Twenty years ago, I thought about what would make us stay together as a family,” Octavio tells me over cups of hot coffee. “We could have opened a restaurant without mole, but I don’t think it would have been as big of a success. Nobody was doing a three-generation mole recipe from scratch. Mole has opened the door for us and kept our family together.” 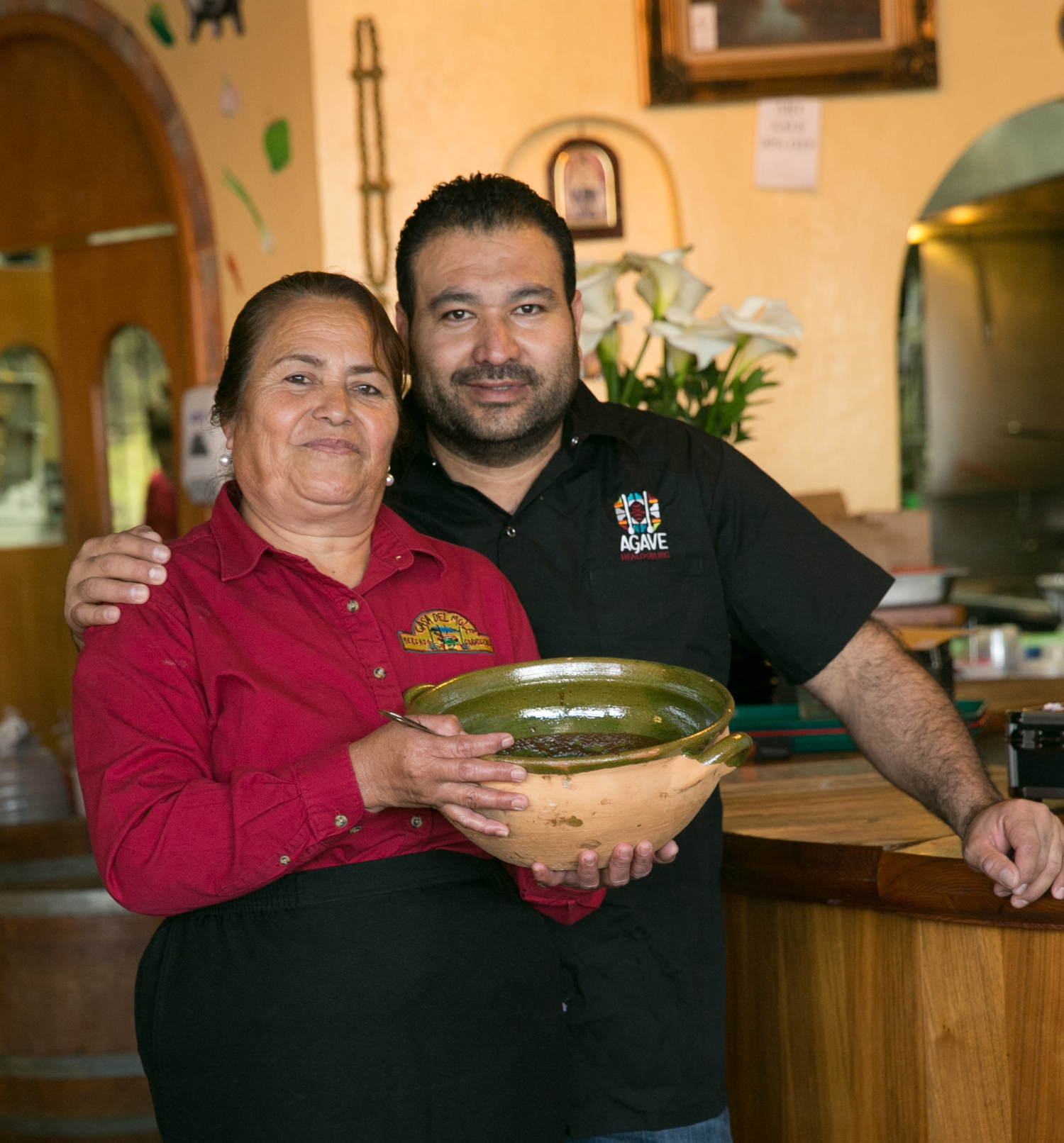 The first Diaz to travel to America was Octavio’s grandfather Francisco. He arrived in Salinas in the years after World War II as a bracero, a seasonal agricultural worker allowed into the United States to work as part of the bilateral Mexican Farm Labor Agreement. But Francisco didn’t fall in love with California. Quite the opposite. He begged his sons to stay in Oaxaca.

And yet, opportunity called. Twenty years later another Diaz, Octavio’s uncle, migrated to Sonoma County in search of work. At the young age of 13, Octavio traveled north alone, joining his uncle and aunt, an American woman who spoke little Spanish. Octavio went on to attend Rancho Cotate High School and Santa Rosa Junior College where he took a couple of culinary classes but mostly business coursework. He worked in the kitchen of an Indian restaurant, married, had two kids, and built a life. As he tells it, a love for the food of his childhood, and a work ethic instilled by his grandparents stoked the calling to become a restauranteur. Eventually, the majority of his seven siblings, followed by their parents, immigrated to Sonoma County. With the opening of El Farolito, Case de Mole, and a second Agave in Oakland, the Diaz family slowly built a small restaurant empire.

“My grandma and grandpa always inspired us to be leaders,” says Octavio, his robust positivity undergirded with a hyper-focused business acumen. “It was very black and white. You either do good or you do bad. You hang around with the wrong kind of people, you’ll be like that. You hang around with the good people and you’ll be like that, or better.” 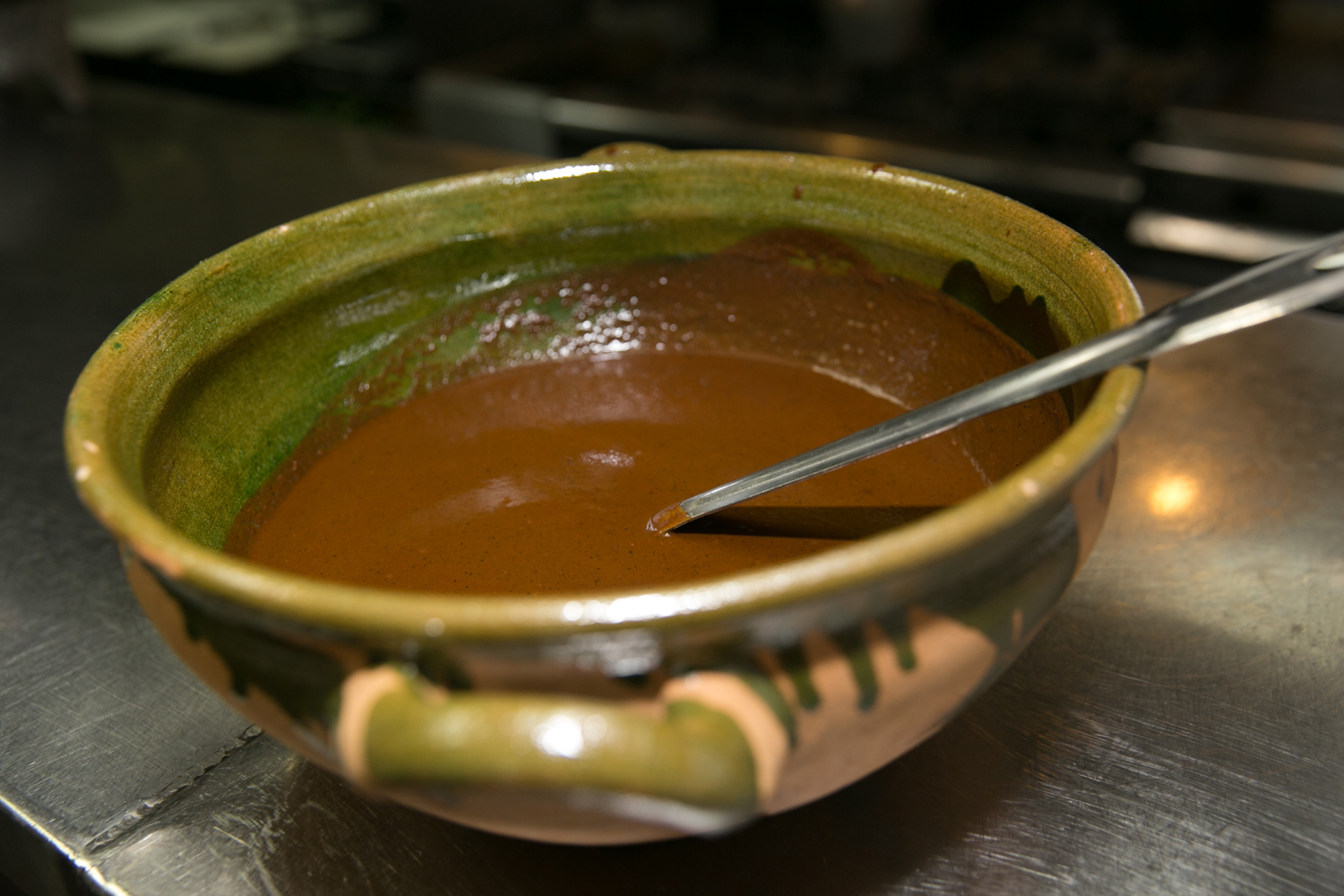 To this day, the mole-making process is managed entirely by Juana, 58, and the elder Pedro, 62. The two use the Agave kitchen to prep and roast chilis, tomatoes, garlic, chocolate, and other ingredients, most of which are imported from Oaxaca, although the mole is sweetened with Gravenstein apples from Sebastopol and raisins from the Central Valley. At one point, they experimented with locally grown chilis, but the taste didn’t feel authentic and customers noticed the difference.

“It’s a lot of work and it’s just them two,” says Octavio. “They let us help roast garlic, peppers, and tomatoes, but they are really secretive and old school about how they do things. They might spend all day doing one step. It’s not about the time. It’s about the flavors.”

Mole has a long history in Mexico. The word mole most likely derives from the Nahuatl molli, which translates to “sauce” or “concoction.” Nahuatl was the language of the Aztecs, the dominant indigenous civilization in Mexico before their conquest by the Spanish. According to lore, mole was invented in the 16th century by nuns from the Convent of Santa Rosa in the state of Puebla. When an archbishop visited, the nuns used meager means to create something memorable. They combined local chilis, plantains, chocolate, stale bread, and an abundance of spices into a spectacular, tasty sauce. The convent nuns came from all over the world—Africa, Europe, Asia—and the fusion of disparate ingredients are the result of those global origins.

“This most traditional of Mexican foods is one of the most fluid, ever-changing items in the country’s culinary history— and all this coming from what might well be the firrst well-known dish to combine ingredients from the New World with those from Europe, Africa, and Asia,” writes food writer Dan Nosowitz in Gastro Obscura.

Mole negro, the Diaz family’s speciality, is one of seven types of mole. Others include mole coloradito, mole amarillo, and mole chichilo. Some mole is spicier or thicker than others depending on where it’s made. And every region, of course, thinks they make the best and most authentic mole.

Like me, you might have been served mole from a jar by a grandmother or mom with a time crunch. Back in Los Angeles, where I grew up, my Mexican-American, Spanglish-speaking grandma would toss together a dinner from Doña Maria mole with its distinctive yellow and brown jar and flourish of red script. After diluting the brown sauce with broth, she would pour it over shredded chicken. We scooped up the mole chicken and rice into stove-heated, store-bought flour tortillas. It was one of my favorite meals. 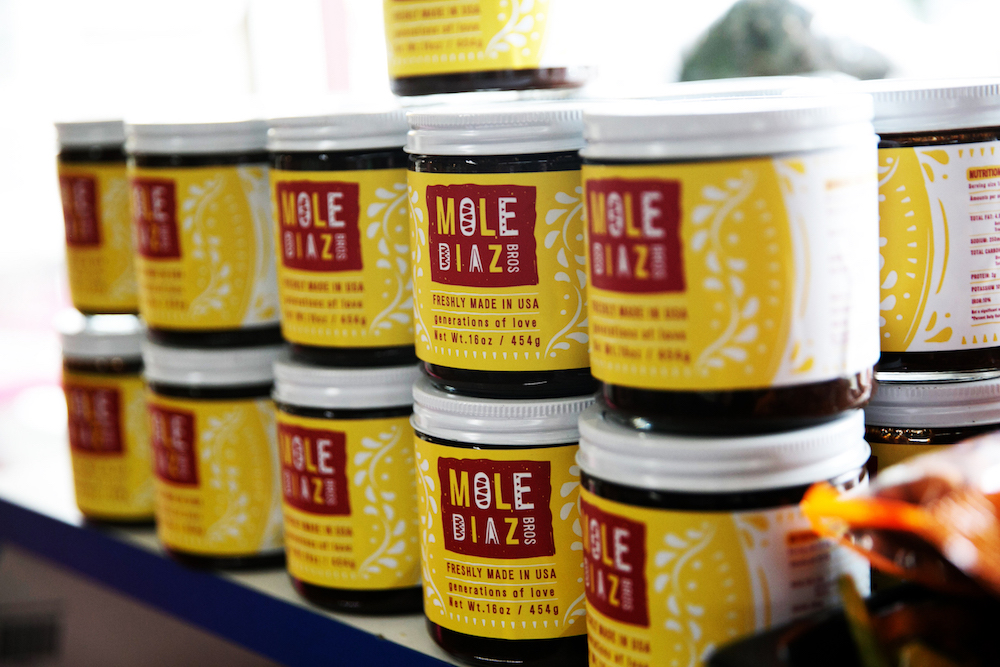 It took a trip to Oaxaca when I was 22, where I ate the real deal, to understand that I’d lived my life in a mole delusion. At a restaurant in the shadow of an old Tule tree that draws tourists to the region, I was served a small piece of chicken swimming in a pond of thick, spicy mole negro. A woman seated nearby churned out fresh tortillas. I took my first bite and the flavor was remarkable: savory, sweet, rich, earthy. This was no Doña Maria. I fi led the meal away as one of my peak food experiences—one I’ll remember until I die.

Sitting with Octavio Diaz at Agave, I set a jar of Doña Maria, purchased for $2.98 at a local market, on the table between us. He picks it up, baffled. Then he smiles and says, “I’m sure it’s a good product,”—because he is a nice person. Still, it doesn’t take long for the truth to come out.

“To be honest, I’ve never opened a jar like this to eat,” he says. “My mother would never eat this. You can see the difference in the ingredients. Who knows what’s in there and what it’s made from.”

He believes the mole recipe brought to the U.S. by his family is of a different breed. For one, it’s made from scratch. For two, you can easily pronounce all of the ingredients. With the introduction of Mole Diaz Bros. mole negro in a jar, the family aims to make their version available to anyone who can’t fly off to Oaxaca to eat fresh mole by the Tule tree. It took five years to get from the initial vision to retail shelves. Made in the Agave kitchen by Diaz’ parents and bottled by CMS Fine Foods in Healdsburg, the mole launched in March. It sells for $9.49 for a 16-ounce jar and it’s available at the Diaz restaurants along with Casa de Mole, their mercado and carneceria.

For now, the plan is to build slowly, introducing the jars locally, with plans to expand in the future. “Right now, we want to keep it stable,” says Octavio. “We are superstitious and believe that you should start small.”

Yet, it’s difficult to believe they’ll be satisfied to stay small forever. Clearly, the Diaz family has a passion for their mole. They’d even like to see it on the shelves in Mexico someday, maybe competing with good old Doña Maria.

“Our mole is crafty, it’s beautiful—this is notyour $2 jar, who knows where it came from,” says Octavio. “I don’t want to sound cocky, but I want it to be the best in the world.”