Two years after their community burned, the people of Monan’s Rill are lighting the way towards a new relationship with fire

In the early morning hours of September 27, 2020, the Glass Fire erupted in a canyon near St. Helena. Conceived in neglected, fuel-laden brush, which had been deprived of indigenous forest stewardship for nearly 200 years, the fire was emboldened by high winds and heavy drought conditions. Dubbed “firestorm,” a term we’ve become familiar with here in fire country, the brutal winds and raging flames encouraged each other, catapulting embers sometimes miles ahead of the main blaze. In downtown Santa Rosa, blackened oak and bay leaves drifted down from the sky, accompanied by ash falling like sooty snow.

The fire grew at a rate of one acre every five seconds as it ripped across the floor of the Napa Valley and raced up the eastern hillsides of the Mayacamas Mountains, its destructive power reducing homes and hearts to ash in a matter of hours. Twelve of these homes were occupied by members of the intentional community known as Monan’s Rill.

“The stag at eve had drunk his fill, where danced the moon on Monan’s Rill.” 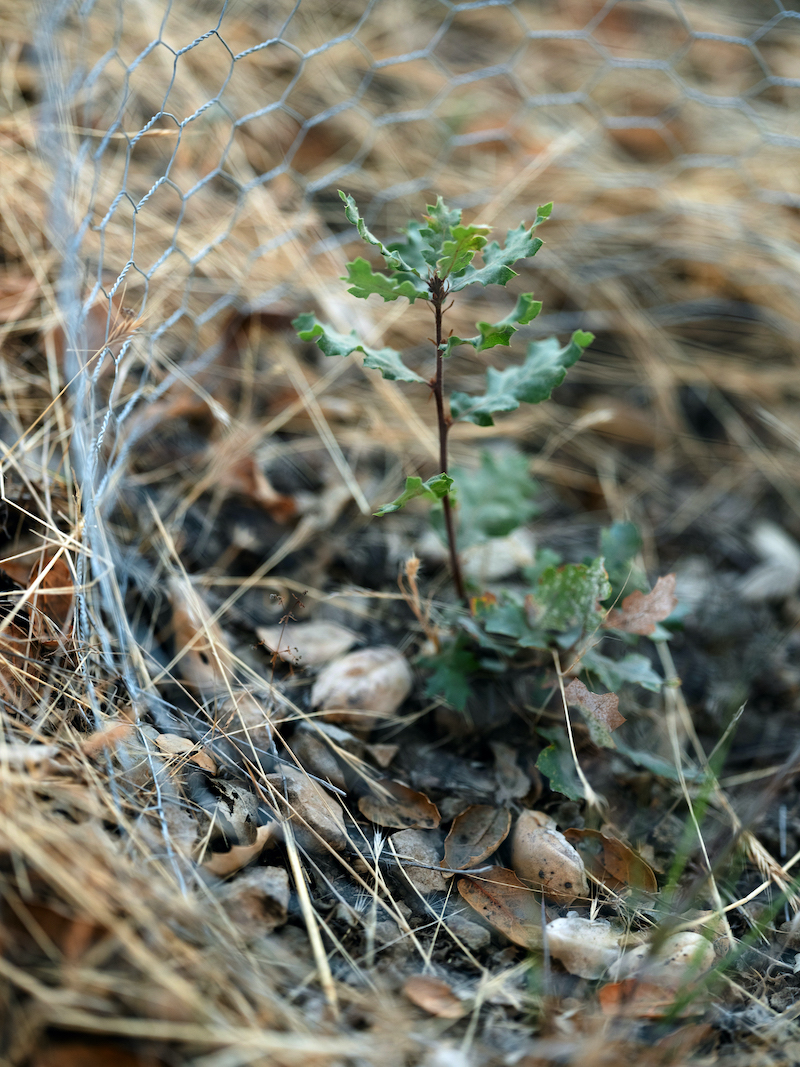 Readers of Made Local Magazine may recall an article titled A Rill Runs Through It, written by editor Jess D. Taylor and published the season before the Glass Fire in 2020, wherein she describes Monan’s Rill as, “surrounded by trees — various oaks in every stage of grandeur, the rich red limbs of manzanita, and fairy-tale conifers.” The community, dedicated to consensus decision-making, was reckoning with shifting ideas of forest management and land stewardship, namely fir tree removal, in the wake of the Tubbs and Kincade fires which burned hauntingly close to their idyllic home.

At the Rill and across California, Douglas fir trees have become increasingly prolific in the absence of fire. Since its founding in the early 1970s, stewardship of the land has always been one of Monan’s Rill’s core values, but opinions about what that means have sometimes been a source of contention and lively debate. Many Rill members felt the best way to support the land was to let it be wild.

Rick Kavinoky, a member since 1978, explains that he, too, ascribed to that belief until he read Kat Anderson’s Tending the Wild, about native land management techniques. “For thousands of years people have been tending the woods, and their main tool was burning,” he explains. “What Europeans found when they arrived was not actually wild, it was almost all managed.”

In 2017, fire now top-of-mind, some members of the Rill attended a forestry conference at SRJC where they were introduced to Dr. Sasha Berleman, director of Audubon Canyon Ranch’s Fire Forward, a program dedicated to applying prescribed fire to the land for ecological health and the safety of its human inhabitants. This chance encounter led Monan’s Rill to become an early adopter of “good fire.” In 2019, in partnership with Fire Forward, they hosted a six-acre controlled burn high on the ridgeline of their property. 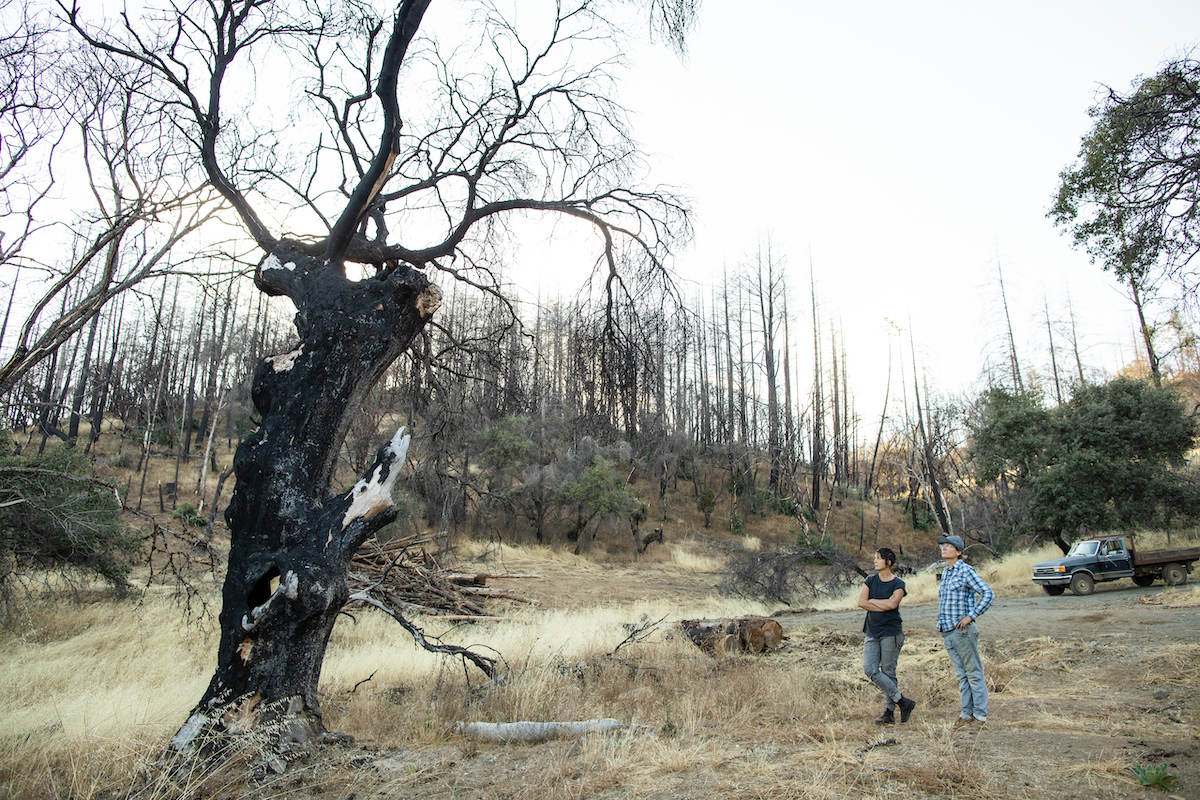 Much of our attitude about and response to fire is fear-driven and suppressive, the language steeped in combative, paramilitary verbiage. We deploy, then fight, attack, and bombard the enemy that is fire. Perhaps this is understandable, given that we have become accustomed to ever-lengthening fire seasons, with their red flag warnings and late night Nixle alerts. We store our valuables in suitcases by the door from June through December, ready to go at a moment’s notice. Breathing smoke-drenched air, we wonder if we should flee permanently, scouring maps for safer climes. Wildfire is our boogeyman emerged from under the bed.

And yet prescribed burning as a preventative tool is seeping into post-colonial culture, considered a helpful and necessary ally. Many of us who live in fire country are shifting from fear-based thinking into nurturing a more mutually beneficial relationship with fire. In Tending the Wild, Kat Anderson describes how regular indigenous cultural burning “created better habitat for game, eliminated brush, minimized potential for catastrophic fires, and encouraged diversity of food crops.”

“One of the ways you fight fire is by lighting your own,” says Rick. “Part of fighting is lighting.” 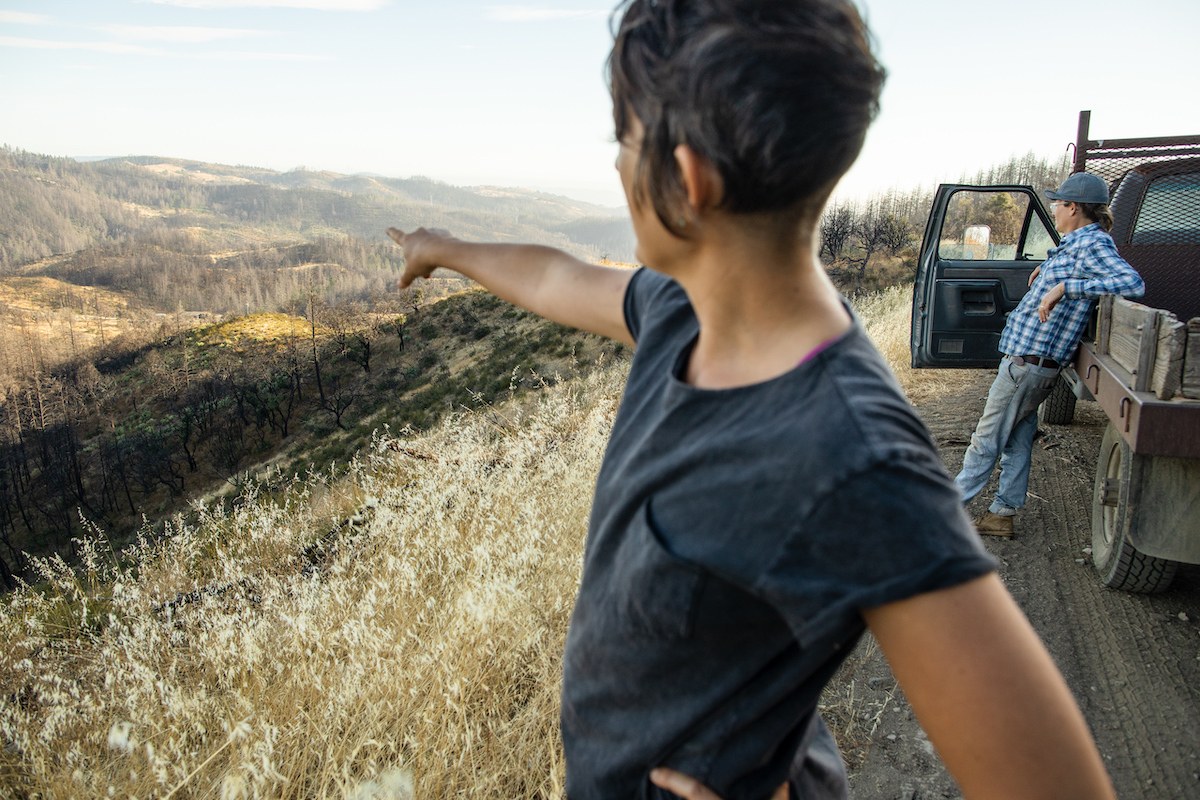 Thea Maria Carlson, who lives in the only Monan’s Rill house to survive the Glass Fire, became a member of the community in 2015, the year that the Valley Fire struck—a move which coincided with what she considers “the new era of fire,” characterized by constant dread. After evacuations from the Tubbs and Kincade fires, it became clear that wildfire on the land was no longer a matter of if, but when. When Rick proposed more widespread prescribed burns on much of the Rill’s land early in 2020, she reluctantly voted in favor. Unfortunately, this was a plan that would not come to fruition in time to protect them from the Glass Fire.

“After the prescribed burn in 2019, everything looked so charred. Some of us had our doubts about whether this really was healthy for the land,” says Thea. “But the following spring, we saw wildflowers and other native plants newly showing up, and my perspective started to shift. After the wildfire, it was dramatic: the prescribed burn area was healthy and green while everything around it was intensely burned. I realized that putting fire on the land is what protected it from the wildfire—that is what solidified my commitment to good fire.”

Going forward, the Rill’s objective is to implement carefully planned and appropriately timed prescribed fires throughout the land they steward. “Our plan is to burn everything, a perpetual cycle of burning right up to the doorsteps of the houses,” Rick says. 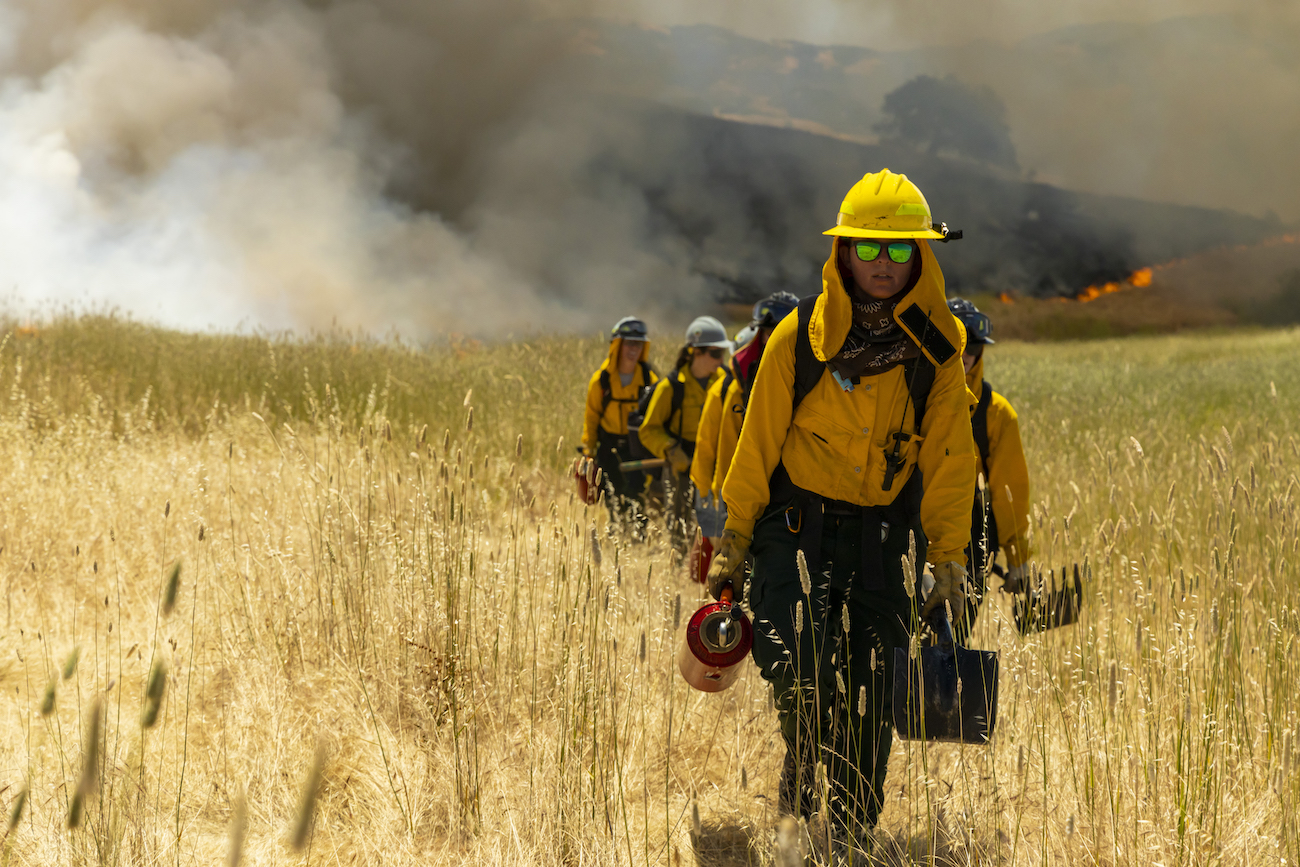 While most members evacuated as soon as the Glass Fire spotted across the Napa Valley, Rick and two other members intended to stay and defend the community’s buildings using the high-pressure water supply, standpipes, fire hoses, and other equipment the Rill had for firefighting. But when Sasha Berleman visited the land late on the eve of the Glass Fire’s encroachment, she quickly advised against that plan. “Everything is so dry, this is not going to be a fire that is on the ground,” she told Rick. “Everything is going to be lighting up. I don’t care how many fire trucks you have, no one can stand in front of that. Get out of the way and come back to mop up, and I’ll help you.” So that’s what they did.

Nature is full of contradictions but none as stark as the post-fire forest, at once devastated and flourishing. The Rill’s fire scar—covering more than 95% of the land they hold—embodies both sorrow and hope, the ancient, blackened oak trees now verdant with what’s called epicormic sprouting (green leaves shooting straight out of the trunk, desperate for more regenerative chlorophyll) and the forest floor now rich with native sedges and grasses and fire-following wildflowers that haven’t bloomed in decades.

Two years after the Glass Fire, apex predators like bears have made appearances on their trail cameras, signifying a healthy ecosystem—for where there are predators, there are bound to be prey, with enough vegetation to sustain them. Monan’s Rill members and volunteers work tirelessly to clear the land of the remnants of the fire, creating hundreds of burn-piles and converting the coals to biochar to sequester carbon. They protect oak saplings from grazing deer—trees with 900-year life spans whose shade will never be enjoyed by the humans who live there now, but which are part of their legacy of stewardship for future generations.

Thea signed up for a firefighting training program a week after the Glass Fire. She is now embarking on a rigorous year-long fellowship with Fire Forward to earn her California state burn boss certification, meaning that she will be able to plan and implement intentional burns on Monan’s Rill land and elsewhere. This is a remarkable pivot from her previous attitude around fire, which used to be, “I’m not interested in fire, I’m definitely evacuating in every wildfire as soon as I can, I don’t want to be anywhere near it.” Instead, she transmuted the trauma of being a wildfire survivor into brave resilient action.

“It was so scary the first time I held an active drip torch. It was a foggy day in Occidental, almost too wet to burn anything, and I was still terrified,” she admits. “But when I actually began to put fire on the ground, it felt like, okay, I can have a different relationship with fire. It was really empowering.”

Thea’s confidence has grown through experience working on prescribed burns with the Good Fire Alliance and the training she has received through Fire Forward. “You have to weigh the fear of doing against the fear of not doing,” she tells me. “Inaction is not low risk. Good fire is good stewardship.” 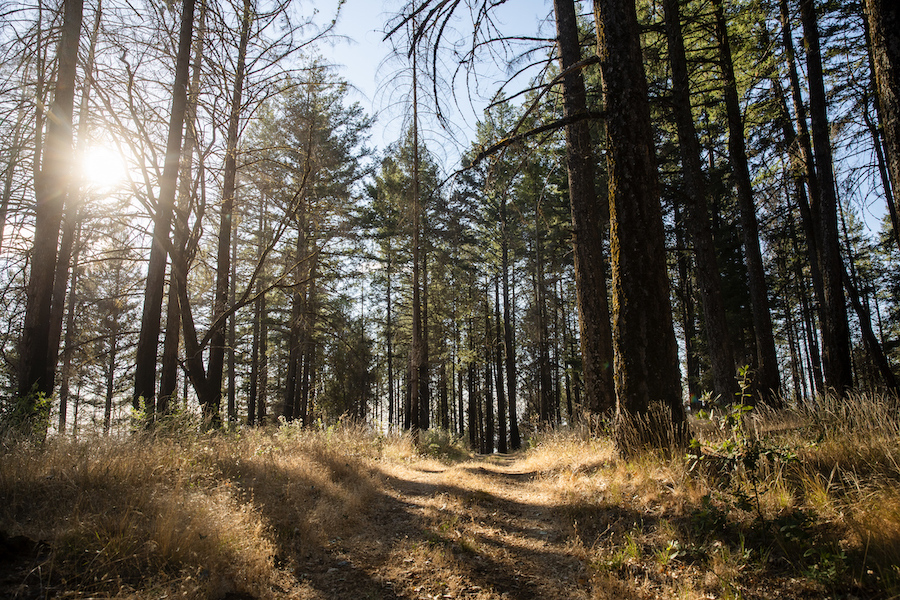 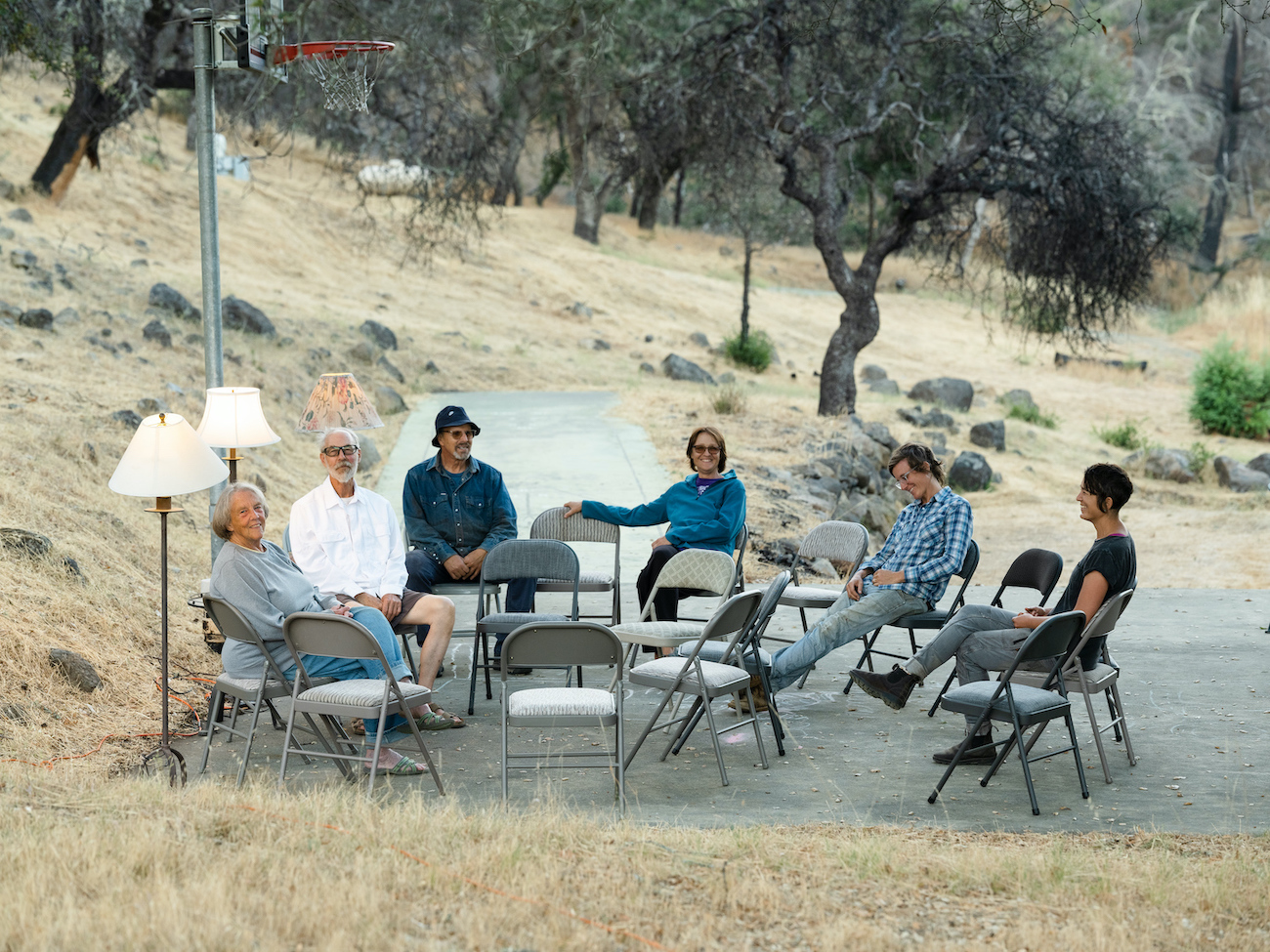