Grow Local – “Plants to the People!”

The success of a harvest starts long before planting. While some might see just a vegetable, any good farmer sees the end result of months, years, even decades of work, the manifestation of thousands of relationships carefully cultivated in the soil, field, and community: bacteria and fungi, beneficial insects and pollinators, customers and crops. 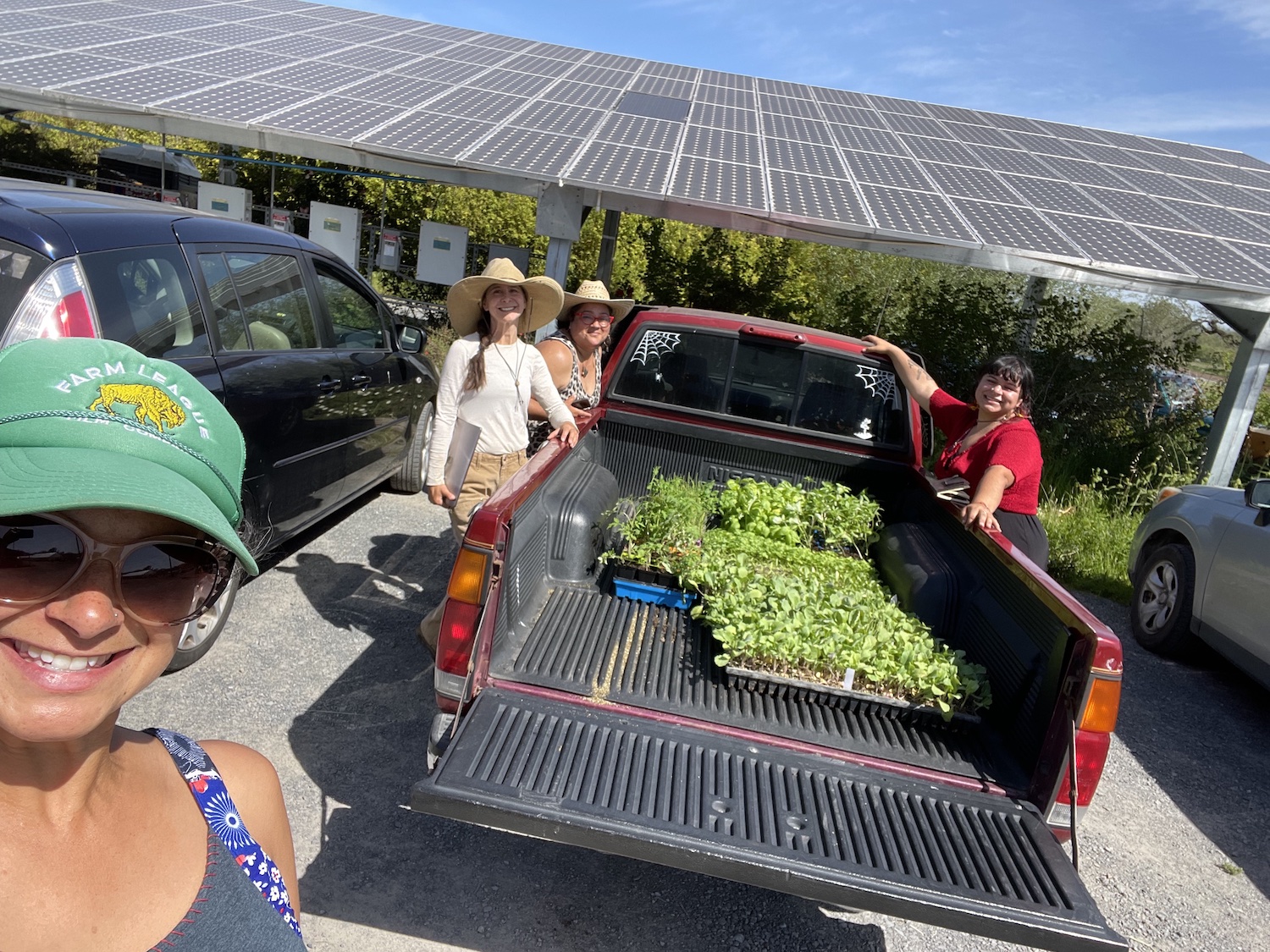 To farmer Caiti Hachmyer, it’s not unlike the grassroots response that sprung up during the 2017 North Bay wildfires. As the rural communities around her burned, existing relationships between Sonoma County and the cities of San Francisco and the East Bay suddenly activated, blossoming into an all-hands-on-deck exchange. Within days, urban allies were opening up their homes, chefs organized emergency food kitchens, city-based organizations began raising funds, and friends on the other side of the bay offered solace.

That sense of solidarity, knowing that the city was there for them in a time of need, reaffirmed for Caiti the importance of cultivating not just connections within her own community but connections between communities.

In addition to running Red H Farm near Sebastopol, Caiti is a founder of Celebrating Womxn’s Leadership in Food, a coalition dedicated to creating spaces for womxn to celebrate, connect across difference, and build trust and community. Each year, over a hundred farmers and food activists gather at Caiti’s farm for a symposium. At first, most attendees came from the nearby farm community, but in the years following the fires she and her co-organizers—Layla Aguilar, Thea Carlson, Brandi Mack and Stephanie Michelle—expanded their reach to farther-flung women in the food community. 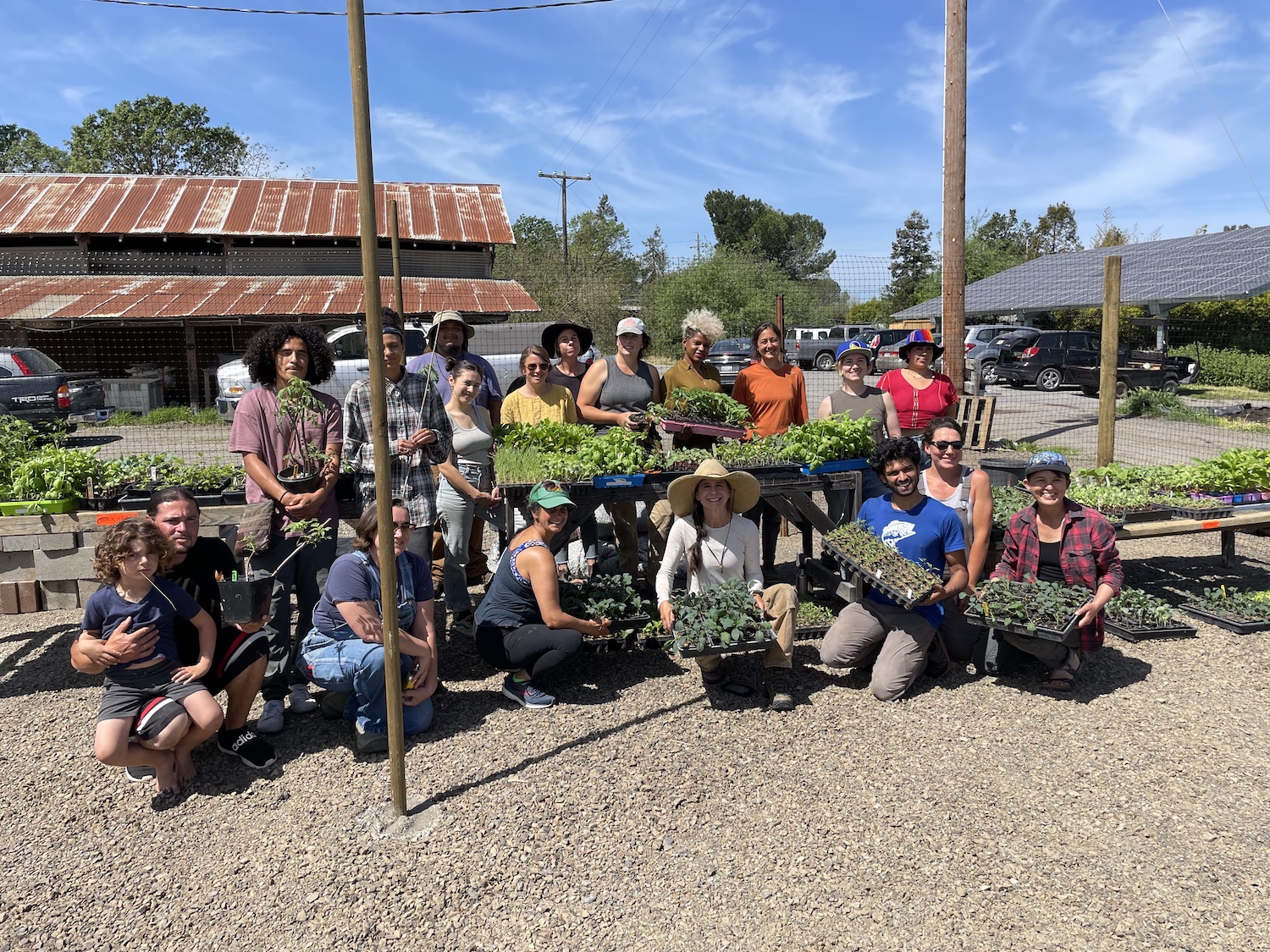 Women like Tere Almaguer of San Francisco’s Hummingbird Farm, a project of PODER (People Organizing to Demand Environmental & Economic Justice). For over three decades, PODER has fought for environmental justice in the Mission District and Excelsior. Despite these neighborhoods boasting more children than any other part of San Francisco, Tere points out that they lay claim to only one percent of the city’s parks and green spaces. “Most of these people are children of braceros,” she says, referring to the farmworker guest program that brought an entire generation of migrant workers, primarily from Mexico to California, between 1942 and 1964. “They came from the land, but now they’re here in the city and they have no access to land.”

That realization led to the creation of Hummingbird Farm, which came to fruition five years ago on a few acres of unused land owned by the San Francisco Public Utilities Commission. It grew out of PODER’s Urban Campesinxs, a food justice and young adult leadership program. Through conversations with these young people, Tere arrived at the idea of an urban farm. “They wanted a space where they could grow food, grow medicine, connect with the land,” she says, “And they wanted to run it collectively and to improve their neighborhood not just for the gentrifiers coming to replace us but for the existing community.”

Word of Tere’s work at Hummingbird traveled north, and one day, she received an invitation to speak at the symposium at Caiti’s farm. Attendees came away inspired by the stories of women like Tere, but more than that: because the event focused not just on disseminating information but on slow and steady relationship-building between all these women, a new bridge now existed between the city and country.

Two years later, when disaster struck again, it became clear what that bridge was for. 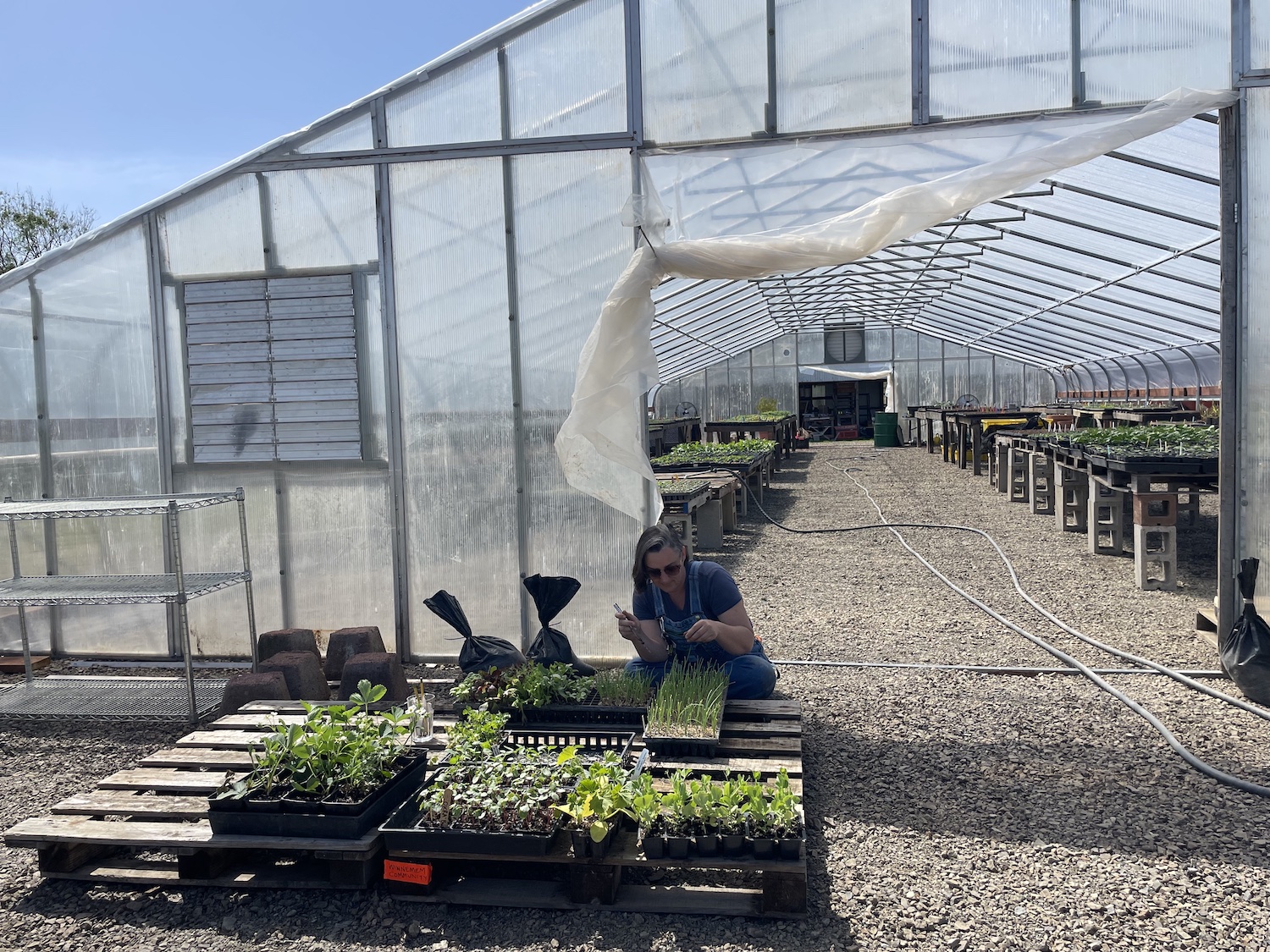 The pandemic of 2020 made clear the importance of local food. This was true both in the city and in more rural communities like Sonoma County. With disrupted supply chains, empty grocery store shelves, and a growing apprehension of crowded stores, people found solace and security in their gardens, while farms that sold direct to consumers, through farm stands or weekly CSAs, could hardly keep up with the surge in demand. Meanwhile in the city, spaces like Hummingbird Farm became not only one of the few spaces where community members felt safe–especially those without access to a yard of their own–but it also became a hub for the distribution of fresh, healthy food to those hardest hit by the rippling impacts of the pandemic and resulting shutdowns.

But in trying to keep up with the growing need in her community, Tere found herself up against the same dilemma she started with: a lack of space. In this case, a lack of greenhouse space. Serendipitously, that spring brought unseasonably warm temperatures to the North Bay. Farmers like Caiti were putting plants in the ground much earlier than usual, freeing up space in their ample greenhouses. “It’s so unusual that time of year,” says Caiti. “It felt like the earth knew that there was going to be lots of need. The universe was answering.”

The moment Tere picked up the phone to ask Caiti if she just happened to have any extra plant starts, that network of women they’d all been cultivating for the past few years immediately energized. Within weeks, just a handful of women-owned farms from around Sonoma County had amassed 10,000 plants ready for delivery down to the city. And by that point, the network in the city too had grown. In addition to Hummingbird, plants were welcomed at other urban farms around the bay, community gardens, school gardens, and some even went home to families so they could grow their own. 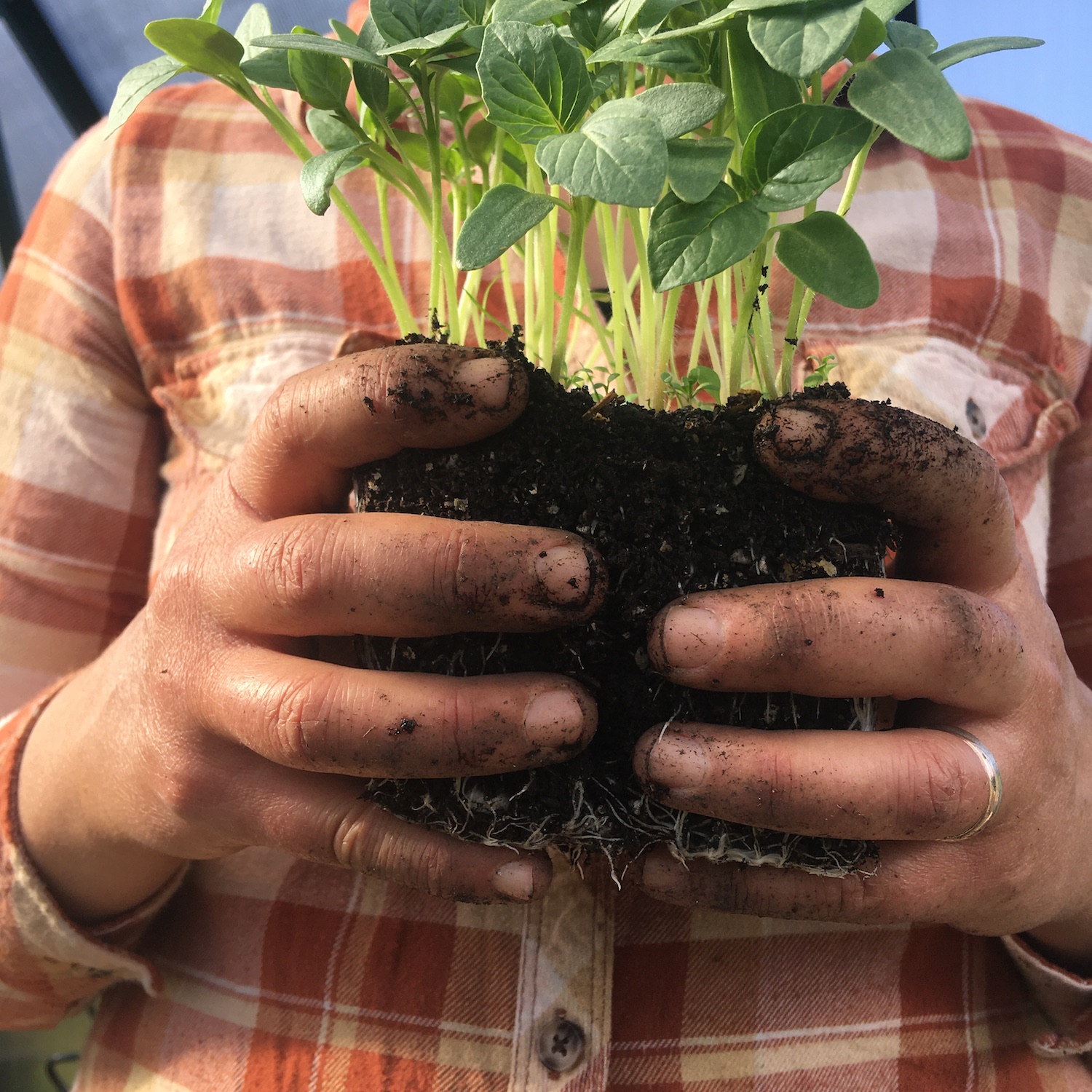 “We always plant more, just in case there’s a frost,” says Layla Aguilar, a participating farmer and co-organizer of Celebrating Womxn’s Leadership in Food. As it did for Caiti, the whole exchange felt to Layla like reciprocity for when those in the city offered up space to people like her during the wildfires, even if just to escape the smoke. “There’s just this sense that we have each other’s backs. And it’s amazing to see this thing grow and expand the past couple years.”

And it’s evolved since then too. That first year, Anna Dozer had been working as an employee on other people’s farms, but had heard of the initiative. Now, a few years later, Anna owns her own farm, Winter Sisters, also in Sebastopol. So this past spring she jumped at the opportunity to participate, which by then meant getting access to an online spreadsheet where urban farms, gardens and community partners had filled out their needs, and rural farms with extra greenhouse space signed up for whatever they could offer. Within a day or two, and by the time Anna got around to that list, most items had already been claimed. But she found a few openings and called dibs on bringing up lettuces, thyme, winter squash, pumpkins and peppers. 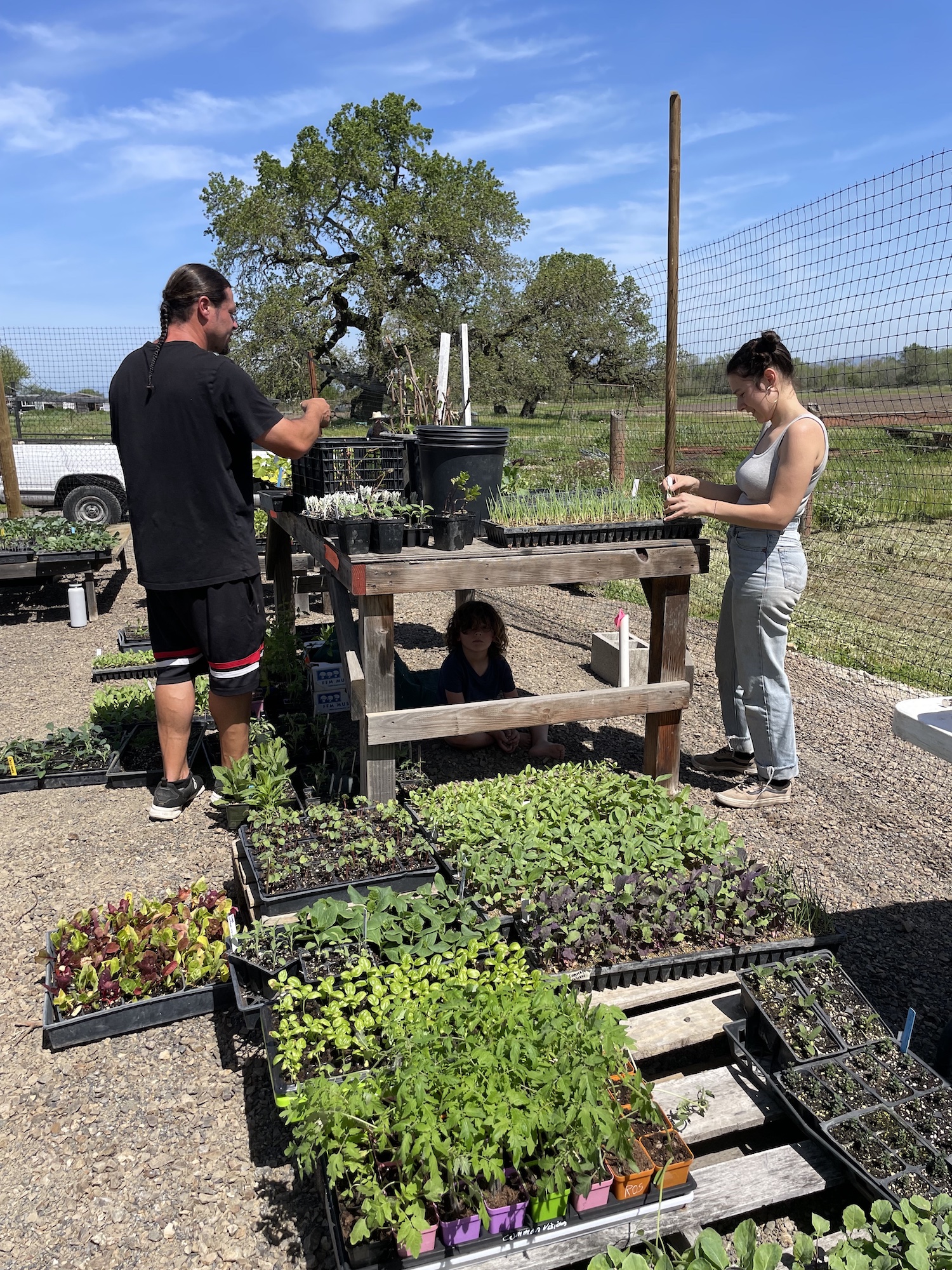 Also different this year was that instead of a quick plant drop off, all participating farmers, both urban and rural, were invited to a special plant pick-up day. Each farm had a designated table to lay out the plants. Layla brought tamales for everyone. Then, gathering in a  circle, they introduced themselves and shared stories of what brought them there.

“I know it doesn’t solve the deeper inequities of land access and food security,” says Anna, reflecting on the privileges that helped her along as a new farmer. “But it allows us to start the conversation and to build relationships, the kinds of relationships where hopefully we can begin to address those issues more deeply.”

“There’s a real sense of belonging there,” says Layla. “They know they have a place to come whenever they need it—and we do too.”