From beekeeping to bee stewardship with Apis Arborea As the sun began to set on a sweet spring day in April 2019, so too did my dreams of acquiring a wild bee colony for my birthday. Just then, like magic, a good friend called, alerting me to a swarm that had landed in a tree in her friend’s front yard. I arrived to a docile, anatomical heart-shaped organism made of many-thousand sister bees surrounding their queen. I carefully collected them in a small Igloo cooler and brought them home to their new hive as the last rays of sunlight were leaving the sky, already completely enamored with them.

A hive is a human-made structure designed to house a honey bee nest, like the classic Langstroth hive used ubiquitously by commercial and backyard beekeepers alike. You’ve likely seen these wooden, thin-walled rectangular boxes, often stacked in towers, containing flat frames on which the bees build wax comb and store honey— convenient for both bee management and honey extraction. But Michael Thiele, founder of the nonprofit organization Apis Arborea, prefers the term “nest” to “hive,” because left to their own devices, bee colonies would rather house themselves in natural nests, typically in tree cavities high above the ground. 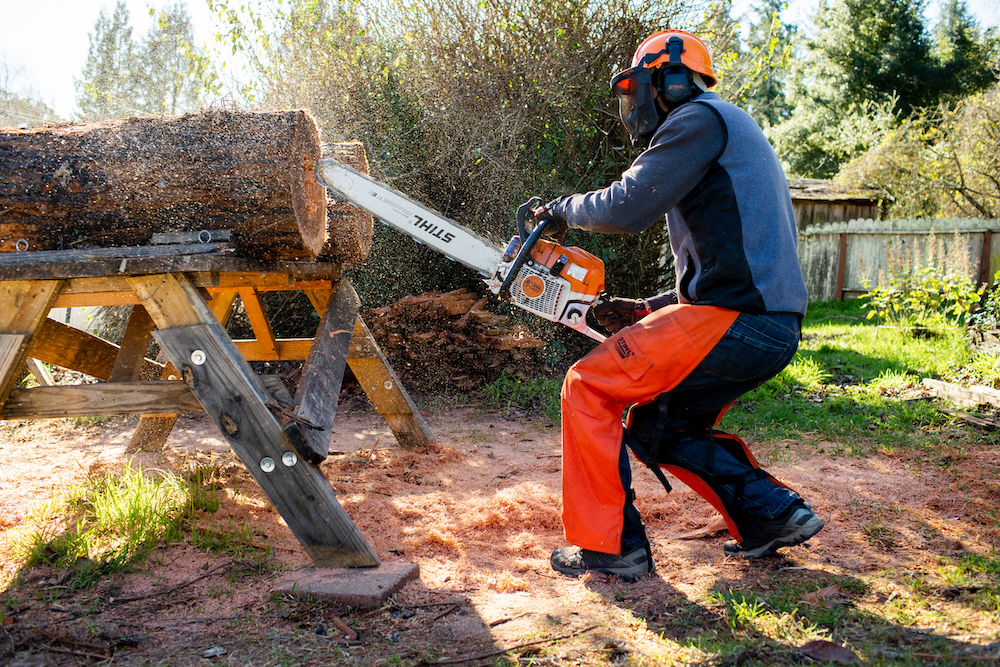 Honey bees, however, have rarely been “left to their own devices.” According to prehistoric archaeological evidence, humans have been exploiting these bees for their precious wax and honey for over 9,000 years, even exalting them in ancient cave art. And as humans became increasingly agrarian, our partnership with and dependence on bees grew right alongside. The USDA, which classifies honey bees as livestock, reports that today more than one-third of our agricultural crops depend on them for pollination, to the tune of $15 billion a year in increased yields.

The problem is that we can no longer deny the devastating effects of commercially-managed beekeeping, “a horrific practice” that Thiele likens to concentrated animal feedlots. Commercial beekeepers consistently see a steady mortality rate of close to 50% of their highly stressed bees, due mainly to environmental and management factors, pesticide application practices, the enigmatic Colony Collapse Disorder, and the introduction of diseases and pests like the varroa mite. The Guardian reported that 50 billion managed bees, or 1.4 million of the 2.8 million commercial hives, more than seven times the world’s human population, were wiped out during the winter of 2018-19 alone.

As Big Ag frantically scrambles to find solutions to this very critical problem while also maintaining the status quo, Michael Thiele is pioneering a simpler and more elegant idea: wilding. Wild bees’ preferred nest size is considerably smaller than managed bee colonies (think one Langstroth box as opposed to hundreds stacked together), and in the absence of so much intermingling and human-administered treatments, naturalized colonies are able to develop resistance to afflictions like the varroa mite, creating healthier and more robust colonies. From what little research we have, it is clear that wild honey bees do not suffer the same disastrous fates as their captive kinsfolk. 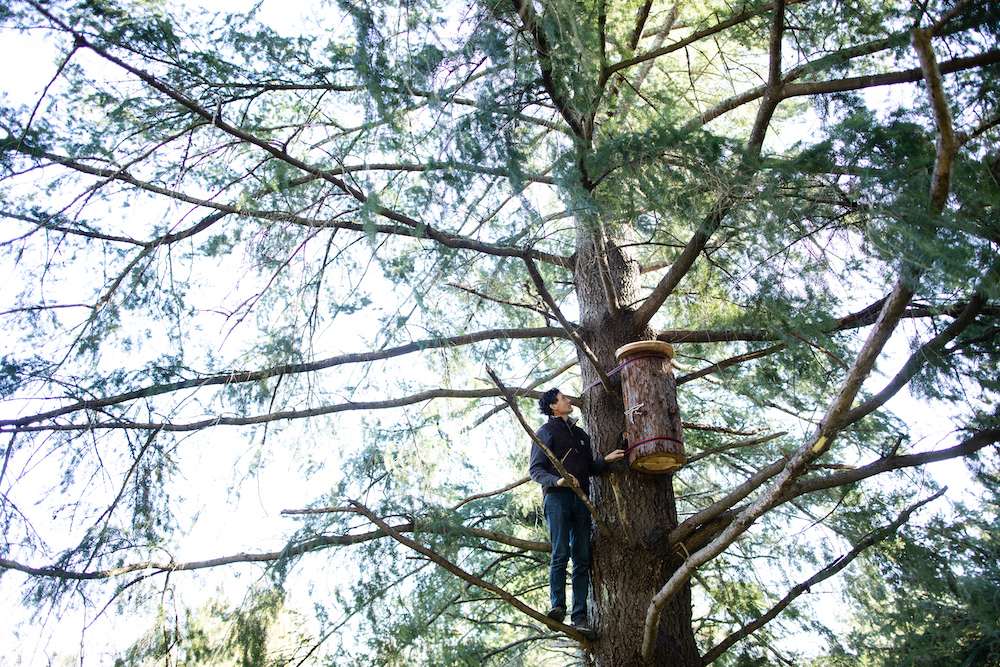 Interviewing Thiele feels like attending a private college lecture. He is thoughtful and gentle-natured, choosing each engaging word carefully, and it doesn’t surprise me when he mentions that he studied philosophy in Berlin before moving to California in 1997. While his ideas may still be considered fringe, his message is catching on in the scientific and conservation community. “When we look into the world, we see we are living in the sixth mass extinction and climate crisis. This ought to inform our visions, our actions, our very foundation of life, really,” he tells me. While listening to him speak, I can’t help but feel like by saving bees, we can save the world.

Active in the honey bee field for over 20 years, Thiele progressed through many iterations of alternative hives and no-treatment approaches before founding Apis Arborea in 2017, the only honey bee wilding nonprofit in the country.

“Apis mellifera is the scientific name for the honey bee, so Apis arborea means the one who lives within trees,” explains Thiele. “The name itself holds the meaning of our mission and vision.”

Thiele manufactures arboreal nests of his own design out of logs, a vast departure from the Langstroth boxes which he contextualizes as reflective of the industrial revolution, “a time when everything was understood to be mechanized. Agency and sentience had been outlawed in the world beyond the human. But now in the 21st century, conditions are radically different. The scientific community is acknowledging that nature has agency and to some degree sentience — a complete paradigm shift.” 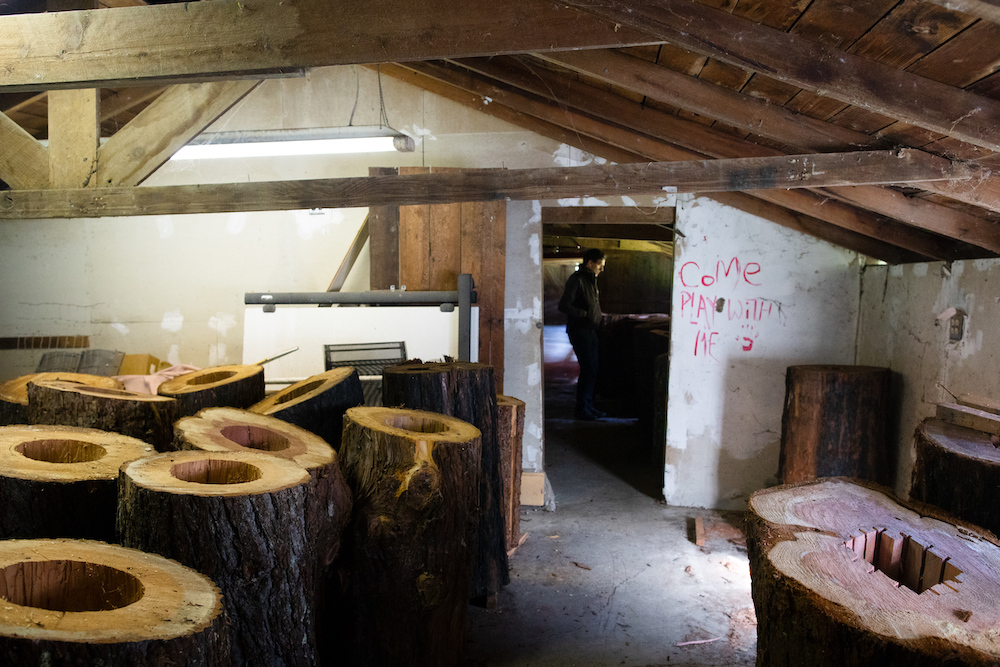 What Apis Arborea is trying to create with their arboreal nest installation program are indigenous ecosystems for honey bees, where the watershed, with its diverse resources and natural habitats away from mono-cropped agriculture, serves as the apiary. “I wanted to shift attention and awareness away from commodities, away from honey, and away from pollination services, which is the biggest driver currently, towards natural nesting environments. Coming all the way back to the roots, back to the wild.”

When I ask Thiele if this departure will mean loss of food crops, he counters with another question: “How much longer do we have before entire ecosystems collapse? Within the regenerative agriculture field, there are lots of players realizing that they have to change, because economically and ecologically, the way we are doing things has no future.” 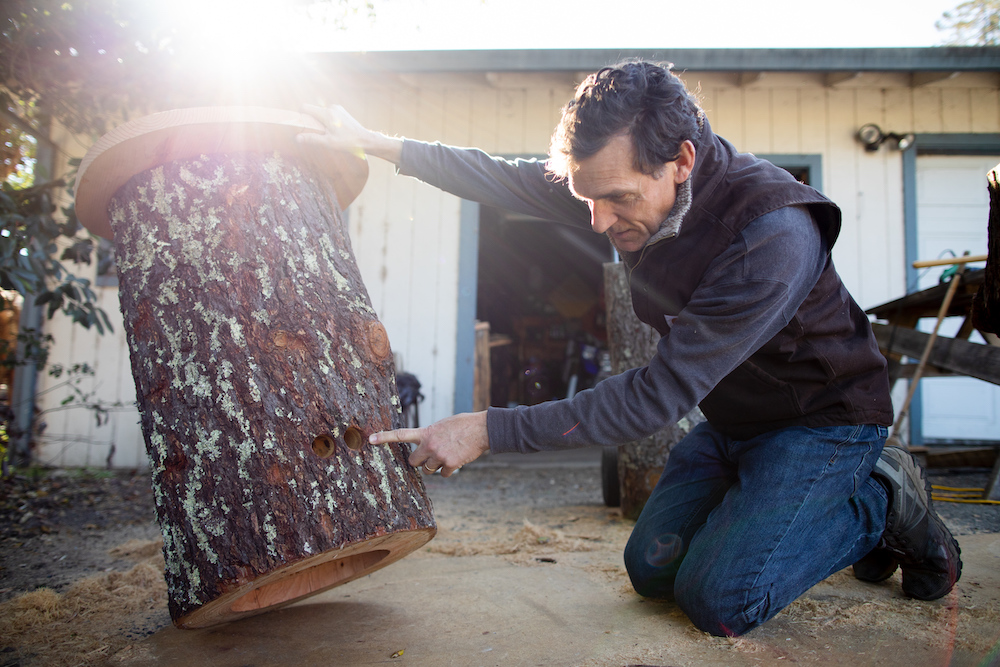 Installed in trees 20 or so feet above ground level, these arboreal nests— 3-4 foot, 100-pound hollowed-out logs with small entrances and roofs—are water-tight, very well insulated, and do not require human intervention once populated. “They are set up and that’s it,” says Thiele. “Like owl boxes, they’re self-populating, so when a hive swarms they have a place to go.” It is common in commercial beekeeping to keep hives right next to each other, a practice which incidentally increases varroa mite infestation by upwards of 300%. But Thiele tells me that “When a hive swarms it is seeking space from the mother nest — they want 300 or 500 or 800 yards. So arboreal nests can be spaced apart by many hundreds of yards, and in that way we are recreating apian or nesting networks.”

Thiele calls their landmark arboreal nest project LocApiary, a collection of bee nests kept locally as a functional part of a healthy ecosystem. Apis Arborea has installed approximately 50 of these nests for free in partnership with local environmental organizations like LandPaths, as well as farms, vineyards, private properties, and schools like Summerfield Waldorf and Sebastopol’s Downtown Charter. Apis Arborea hosts workshops demonstrating how to make these hand-crafted arboreal nests, and they can also be purchased directly for around $825. The idea is in its infancy, but growing steadily. “This year is going to be a very big year for us,” Thiele says confidently.

Even while sitting with Thiele in a sunny patch of field on arguably the nicest January day in existence, resplendent with bees buzzing gently overhead and lilting songbird serenades, I couldn’t stay my encroaching dark thoughts about the immensity of the job at hand. How to shift destructive, outdated paradigms? To protect and nurture the most vulnerable among us? To leave a bee-filled world for my young children? When I mention this, Thiele effortlessly counters my bleak concerns with boundless optimism. 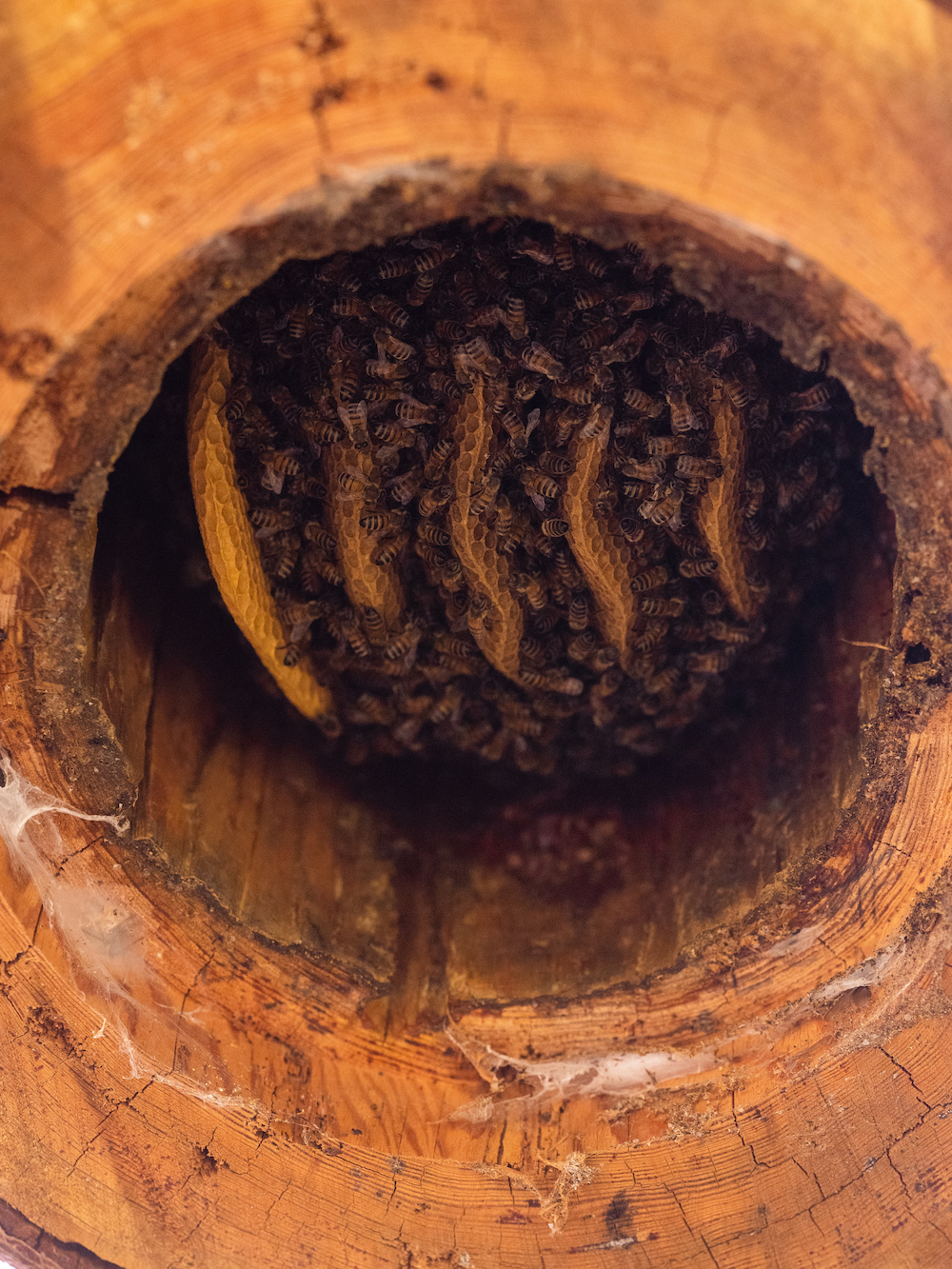 Apis Arborea is in the business of “wilding bees”. Photo: Page Green Photo

“I think honey bees are messengers of hope,” he says, soothingly. “They are such an inspiration for us, for humans, culturally, spiritually, economically, ecologically. Think about a bee hatching in utter darkness, walking on comb, and then her big day comes when she steps in front of the entrance and spreads her wings and flies into the unknown. And she isn’t doing this with worry and doubt and fear, but with determination, not for her own well-being, but to serve. Honey bees do serve each other and the world, and that is just the utmost expression of hope, of never giving up.”