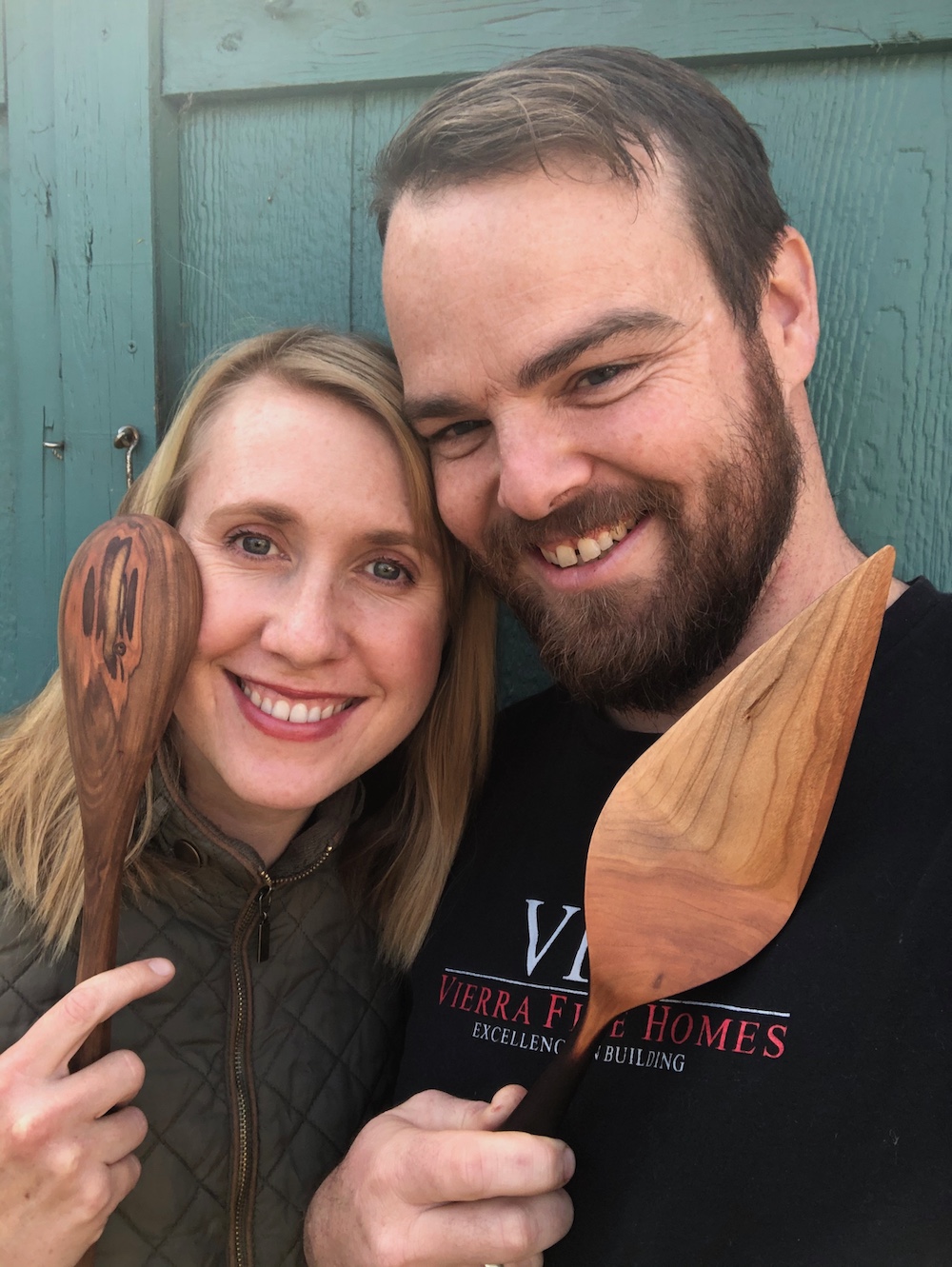 My best friend’s husband, a home cook with professional culinary skills, has impeccable taste and exacting standards. Every holiday season I effortlessly shop for his wife and son, and toy with the idea of getting something for him too, but usually chicken out. I figure he already has everything he needs, or I would get the wrong thing and everyone would feel awkward. But last year, as I was scrolling Century Guild Woodcraft’s online assortment of handmade utensils, I came upon a one-of-a-kind, gorgeous and useful pastry scraper carved out of glowing walnut wood, and immediately thought of him. Overcoming my anxiety, I placed the order, and it arrived soon after neatly wrapped and cradled in a box of repurposed wood shavings. And, get this… he liked it!

Michael and Rachel Dovey started Century Guild Woodcraft around 2014, the name a nod to a group of Victorian-era woodworkers who balked against “the shoddy look and shady ethics of mass-production.” Michael’s woodwork reminds me of the elegance of a figure skater obviously working really hard while making it appear effortless. With its organic, almost free-form clean lines, rounded edges, and absence of superfluous flourishes, this is work that values function over form.

Michael’s bread and butter is fine custom work for the discerning client who spares no expense, using high-end woods and impeccable craftsmanship. The results, from grand doors and built-ins to tables and chairs, also produce many small cast-offs of precious leftover wood that he hoards in the storage shed next to his 400 square-foot home-based workshop. Each November and December his commissioned jobs are put on hold as he transforms these scraps of African mahogany, wenge, and walnut into kitchen utensils like spoons, spatulas, scrapers, and honey dippers that serve as functional works of art.

Michael’s wife, Rachel, uses a band-saw to form rough cut-outs which he then brings to life, informed by the wood’s grain direction and weight, as well as his intuitive sense of their inherent purpose. “I never know what it’s going to be until I’m very deep into it,” he tells me, adding, “The grain dictates what I’m going to do, and I just follow the wood.”

Special care is taken to make sure the weight, balance and hand-feel of each piece is just right. Once complete, the wood is oiled, bringing the particular grace and color of the grain to the surface. The result is a nearly-luminous, dignified utensil that appears proud of itself, relieved to embody its final form, practically begging to stir a pot or grace a counter. 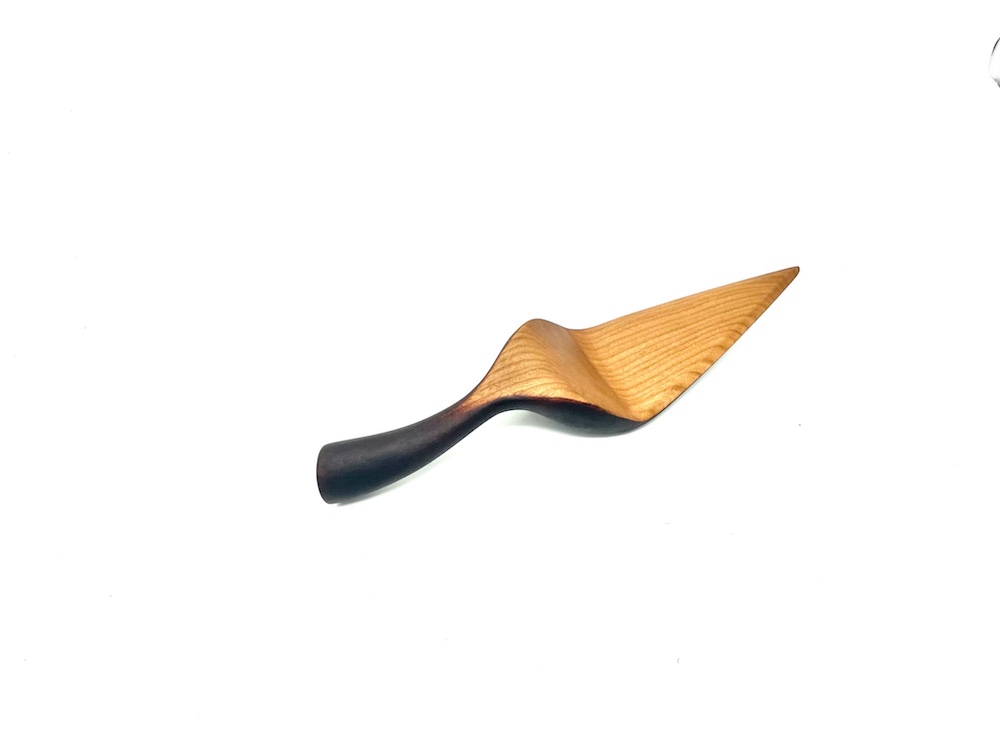 Considering that Michael spends roughly 12 hours a day working in his shop, it makes sense that the business has become a family affair, with his nine-year-old daughter and three-year-old son underfoot using tools in what Michael calls “tactile learning and play.” Rachel tells me, “My daughter likes to hand-carve with knives, which I think is…scary.” “She designed the baby spoons that we sell,” Michael adds, beaming with obvious pride.

Although Michael is grateful to keep busy with commissions, his dream is to be able to make a living off of his non-commissioned work. Rachel, perhaps the more practical of the two, says, “He makes beautiful tables and chairs…” “—but they’re boring,” Michael counters. He prefers “bizarre concepts, like art furniture,” including enigmatic “puzzle furniture,” another elegant idea that sounds both straightforward and mysterious.

They are also hoping to add a large, powerful chainsaw and Alaskan mill to their woodworking accoutrements so they can harvest wood slabs in the wild, out of burned-out trees. “There’s just so much of it out there that should get used,” Rachel muses.

The Doveys run farmers’ market booths in Occidental, Healdsburg, and Mill Valley where they sell their custom utensils for $30-$125, making them accessible to a wide swath of people who appreciate beautiful and functional art. 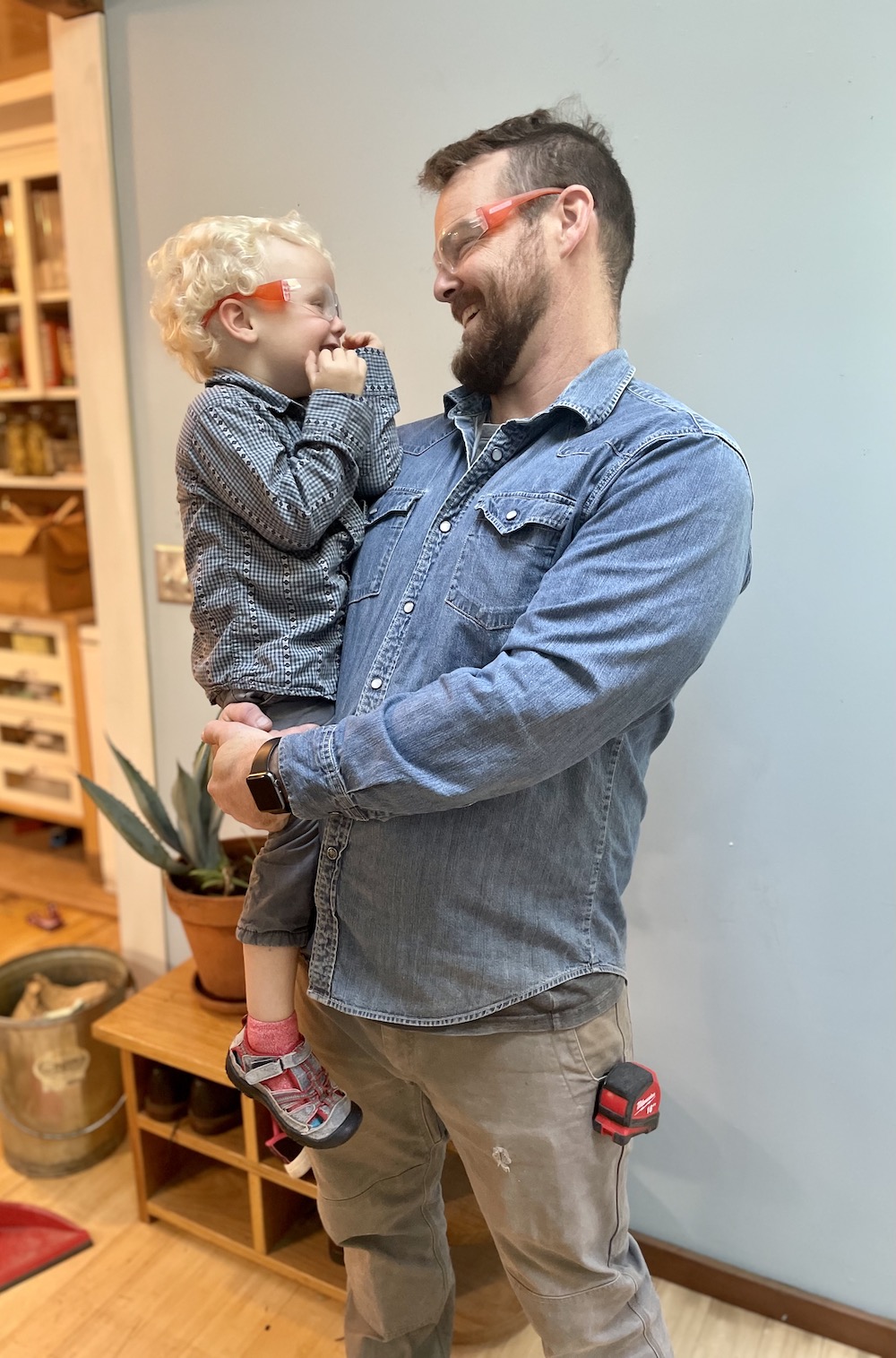 This year, thoroughly exhausted by the disposable, soulless, mass-produced stuff that we are constantly inundated with, I am focusing my own giving on quality over quantity, cherished over cheap, ethics over ease. I don’t want to push my luck, but I do have my eye on a lovely and long-handled stirring spoon that matches the aforementioned picky friend’s pastry scraper. There’s also a graceful ladle that would look divine dipping into any one of my own coveted winter soups, if anyone is wondering what to get me.
centuryguildwoodcraft.com