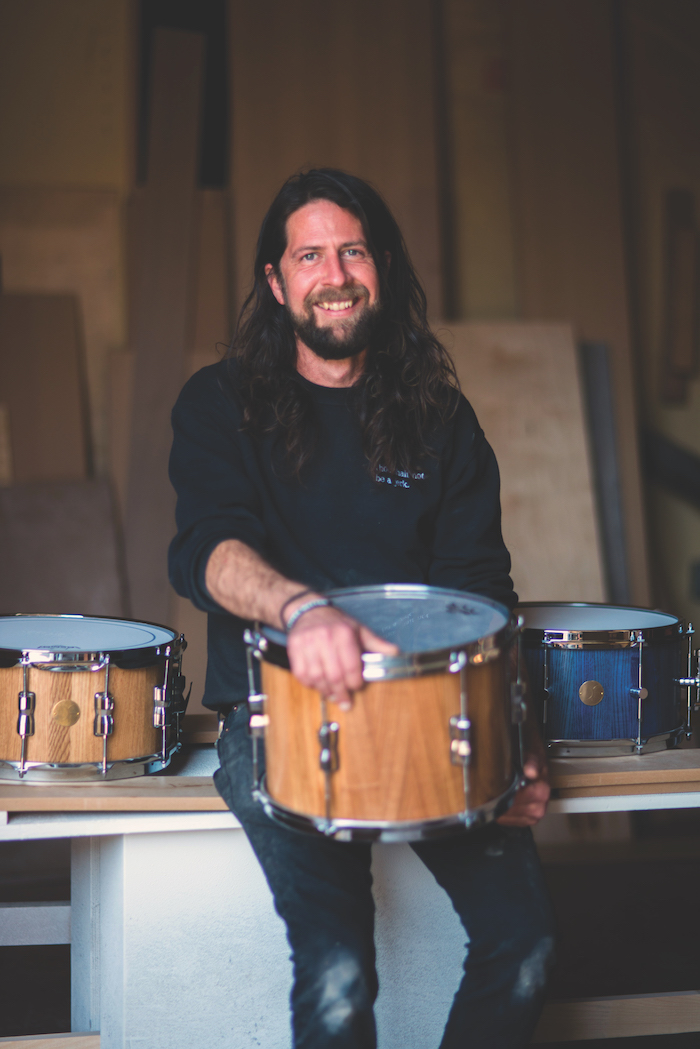 Most people in Sonoma County know Dan Ford as the lanky, quiet, Dave Grohl-resembling drummer with a sly Sagittarius grin who backs multiple musicians like Emily Jane White, John Courage, Frankie Boots, The Ironsides, and others. His employers know him as a skilled and dedicated woodworker who produces high quality custom cabinetry. On this summer afternoon, as he walks me through his woodworking studio near the Petaluma River, wood shavings dusting nearly every surface and the earthy scent of freshly cut oak and cedar drifting through the air, I am getting to know Dan Ford, the drum-maker.

In the “Before Times,” Ford spent most of his days here working on projects. In early 2020, he had just returned from Europe and Mexico and was planning other tours as the pandemic shuttered most of the globe. “I definitely had to just buckle down and work my day job and go through that. I’ve been really appreciative that I do have a job through the pandemic,” he says.

Then, after almost ten months of sheltering in place, he began arriving early and staying late, “grabbing wood out of the burn bin and trying it out,” he says, pointing to a bin of wood scraps, “knowing that I would probably fail a little bit for a while.” Though he’d never built an instrument before, he was inspired to learn how to create custom, handmade drums—something he’d been talking to himself about for nearly a decade.

He started piecing together his first drum in January 2021, spending most of his free time in the shop, and utilizing the scrap wood for his custom stave snare drums. Drums are assembled with vertical pieces of wood that are clipped together like a barrel; each section is angled and it all comes together to form a nice smooth circle. Not only is each drum gorgeous and visually unique, but every type of wood creates its own specific sound. For an added local flair, the drums are adorned with brass labels created by Sonoma County artist Michelle Feileacan (also a past photographer for Made Local Magazine.)

“The dense woods are going to reflect more, softer woods are going to absorb more of that sound and be more pillowy,” says Ford. “This whole range of amazing sounds can come from snare drums—or really bad sounds that are sometimes desirable, depending on the situation.”

For those not familiar with the world of drum sets, the snare is arguably the most important piece a drummer uses. Snares are versatile and can produce a wide range of effects, so Ford says most percussionists own anywhere from 10-30 or more, depending on what type of music they play. 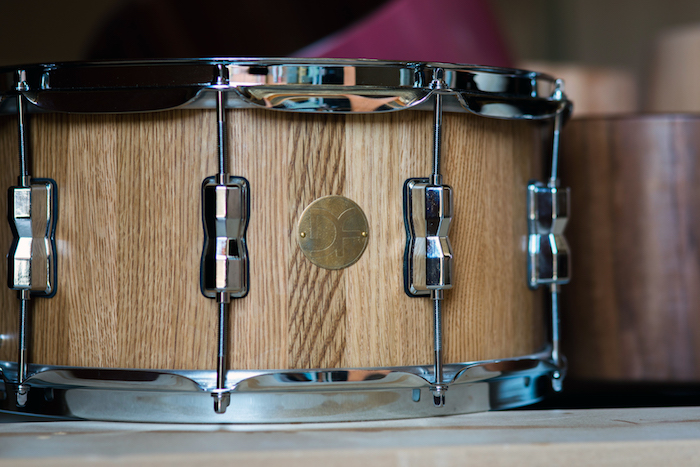 “For somebody playing a drum set, it’s the central main drum. It’s the one that you really hear, that really holds the whole groove together,” says Ford. “It’s what keeps, what they call, the back-beat.”

A custom snare is a dream for some musicians, he says, and Ford creates each piece with intention, focus, and with the individual drummers in mind. From the type of wood they prefer, to what kind of sound they want, Ford walks them through the creation process from start to finish.

“From the moment we started our initial consultation, Dan’s passion and instincts about his builds were immediately clear,” says local musician Anthony Vaccaro, who ordered a custom snare from Ford earlier this year. “It’s always great to see your friends take on new challenges and paths in life, but in this instance, it’s a no-brainer. Dan Ford is a drummer’s drummer, through and through. With his many years as a wood worker, aligned with his many years as a drummer, the final product mirrors his talent and commitment to his crafts.” 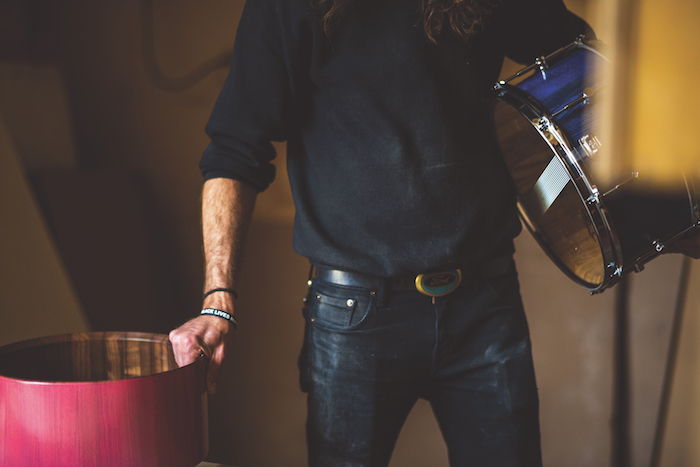 In 20 years of woodworking, he mostly crafted what others wanted him to build. Now he says making drums has breathed new life into his cabinet making, offering new perspectives and excitement for his work. Ford says there is also something deeply satisfying about playing on instruments that he’s created with his own hands. He hopes to make an entire set for himself; so far he’s crafted a white oak snare, a sapele piccolo snare, one made of deliciously fragrant Alaskan yellow cedar and another made of elm, his favorite wood to work with. He’s also built drums out of walnut, black cherry, and ash.

“This has been about self-exploration for me, seeing what I can do and getting over the fear of failure that has been with me my entire life. Getting positive feedback feels like a real victory. That’s huge for me,” he says. “It’s made me a happier person.”