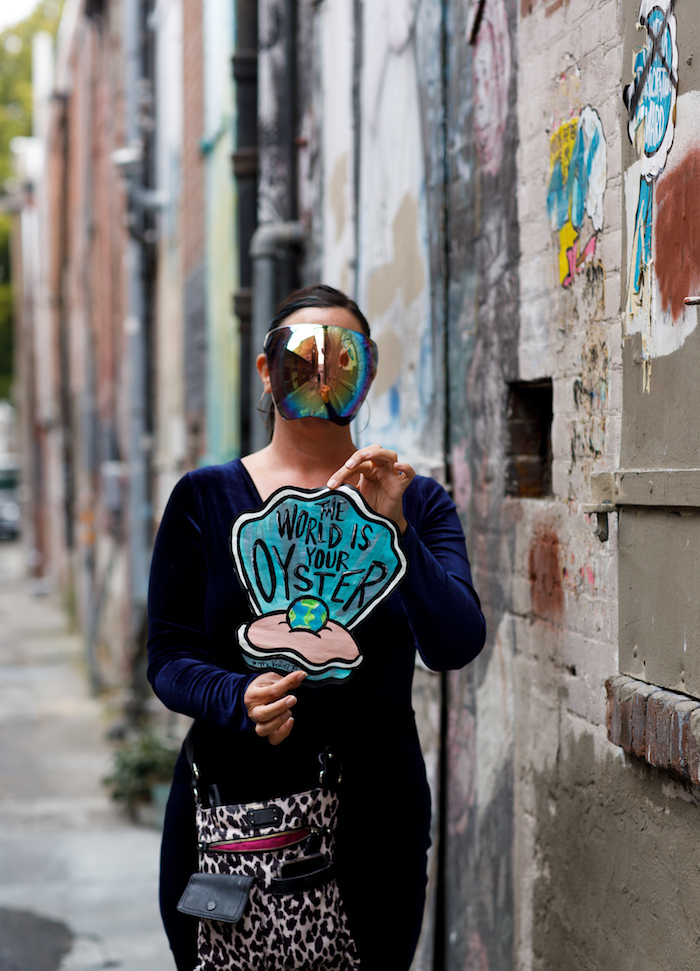 Just two days after her 42nd birthday early in the spring of 2020, The Velvet Bandit pasted her first piece of street art, along the Santa Rosa Creek Trail: a toilet paper roll with the words “Let’s Roll,” a nod both to the hawkish era of George Bush, and, of course, the new reality of supply hoarding wrought by the detonation of COVID-19. It was March 27, an otherwise ordinary Friday afternoon, but aside from one family strolling by, quiet as snowfall. With a friend keeping lookout just in case, it took a mere minute to commit her first act of vandalism—or welcome beautification of public property by a fellow taxpayer, depending on your lens.

“I was hooked,” she tells me on a recent afternoon at Café Frida, a mere stone’s throw from another of her pieces—a bright blue Virgin Mary adorned with the words, “Wash Your Goddamn Hands.” “It’s an adrenaline rush, it’s therapeutic,” she beams, “Doing this lights my soul on fire.”

The Velvet Bandit (TVB) joins the ranks of those unlikely pandemic victories, stories of people who were launched out of their ordinary lives into an exciting orbit. Just a few months before the world got quiet, her marriage of two decades ended, as well as a stressful, underpaid gig that was more glorified babysitting than art instruction. She took a job as a lunch lady at a local elementary school and bought herself a bright green velvet couch to reclaim her living room. 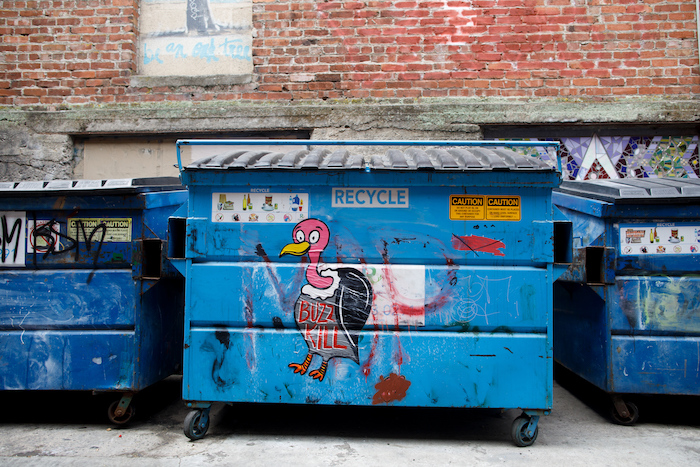 She’d been making art for decades (decorating cakes, painting ceramics, dressing windows), but when she was laid off in the spring of 2020, this mother of two decided to capitalize on her free time and the empty streets by pasting up her town. Wheat paste (aka Marxist glue) came together easily on her stove-top (a simmer of flour, water, sugar to add sheen) as she used acrylic paint on the newsprint that had been collecting dust in her garage for a decade.

“It feels like my civic duty,” says TVB, whose paintings are bright, political, cheeky, refined without being precious, a cartoon pop art style that seems both iconic and completely her own. She is art-as-activism incarnate, recalling fondly her first protest in the ‘80s—chanting for union rights on the steps of the Capitol Building with her dad. After George Floyd was killed last summer, she pasted several pieces in support of Black Lives Matter, including women holding a sign with the words “thoughts and prayers” crossed out and replaced with “policy and action” and “register and vote.” Sausalito recently got a picture of Abe Lincoln with a mask that says “Tax the Rich.”

Her pasting is prolific. Over a thousand pieces adorn walls, power boxes, street poles, dumpsters, even taco trucks, in every town in Sonoma County and an ever-widening field that includes Marin, Napa, Mendocino (including her hometown of Willits) and the East Bay. The parking garage in Ikea remains one of the few private businesses she’s pasted—a spray of crystals that reads “I like your vibes,” which, as of this writing, was still there. 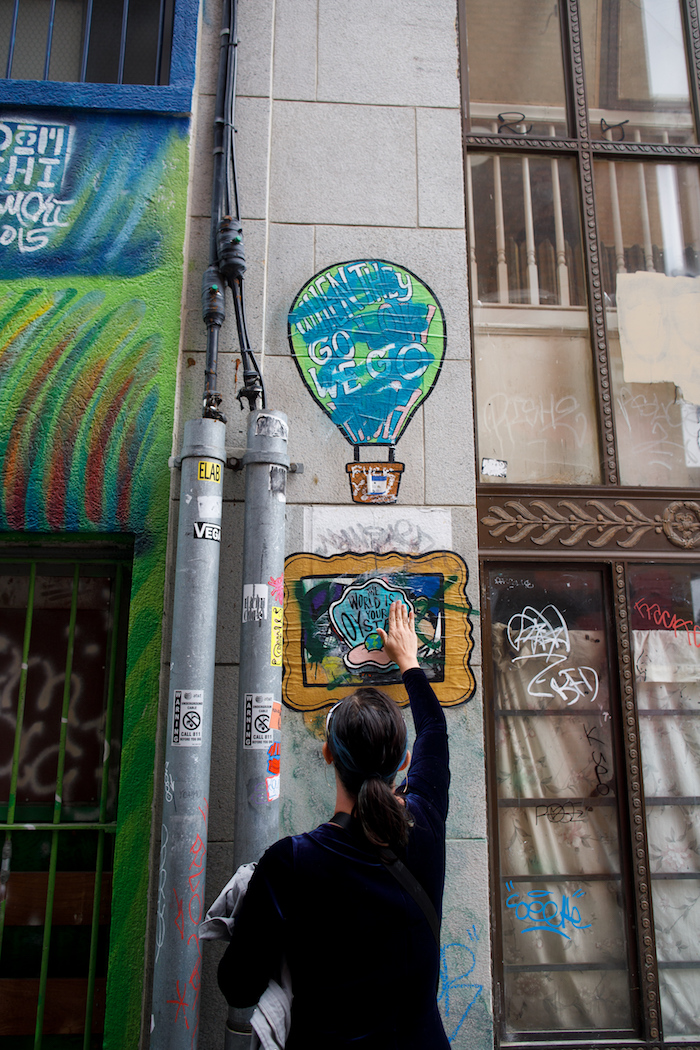 Push-back came swiftly and has remained steady, but that doesn’t deter her: “Actually, it means I’m onto something, that my art is powerful.”

First it was someone criticizing her for being out during a pandemic; once it was a suit guy who called her a “nut job” as he caught her mid-paste in his neighborhood. When she circled back the next day to find her art gone, she was ready with a new piece to honor their interaction: a squirrel holding a sign that said, “I’m a nut job.”

It, too, disappeared swiftly, as did the six giant panels about voting that she zip-tied above the freeway from here to Marin in the wee morning hours of Election Day. “I never know how long something is going to last,” TVB admits, which gives her the freedom to explore, play, have fun, let go—and, as in the case of her beloved RBG on the Santa Rosa Creek Trail, keep pushing back. The paste-up (an unmistakable likeness of the beloved bad-ass justice with the words “All Rise”) has been blacked out with spray paint at least eight times, but she keeps at it, undeterred by the defacer who laments that she’s politicizing a public space where people come to exercise.

As a “recovering people-pleaser,” TVB is finding new contours of courage. On Instagram, someone called li’l frog legs comments, “why’s your stuff so wack do something better with your life,” to which she replies, “I’m flattered my art moves you enough to keep commenting.” She continues: “If you haven’t been slaying at your art for the past three decades, putting yourself out there every day, and consistently working at getting better at your craft every single day, I don’t care what your opinion is.” 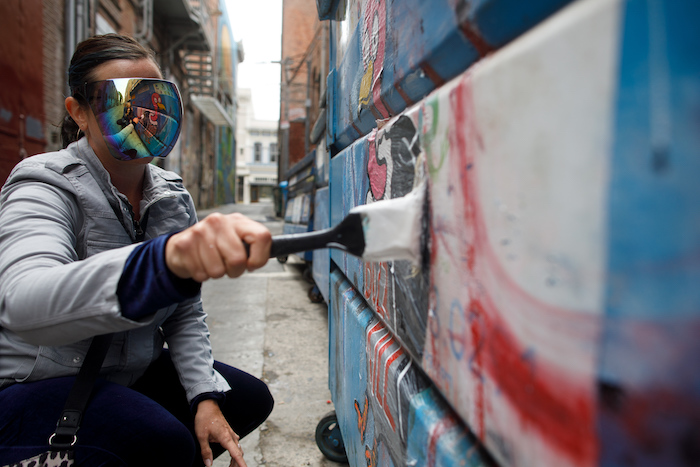 And yet, given this fraught moment, there are people for whom the art resonates, but not necessarily the artist. To wit, she’s received explicit messages about her race: “It would make me very happy if I knew you weren’t white, if you were Latina,” admitted one woman. Another guy was more direct—“Fuck you if you’re white.”

Spoiler alert… “I guess I’m ready to come out as a middle-aged white lady,” she laughs, and is quick to acknowledge the privilege this affords her in moving under the radar, never suspect. Still, she wonders at the

intersection of race and gender, at the ire she inspires because she’s a woman staking her claim in a male-dominated realm.

As feminist scholar Jessica Pabon points out, “Gendered and racialized Western social conventions associate graffiti with criminality, criminality with masculinity, and masculinity with cisgendered men.” When acclaimed British street artist Bambi, known for her subversive stenciled murals, was called “the female Banksy,” she balked at the normalization of using men as benchmarks—had anyone referred to him as “the male Bambi”?

Recently, The Velvet Bandit has found herself embroiled in an ugly battle with the BCK graffiti gang in Petaluma after she unwittingly pasted over an old, faded tag on a power box, originally done by the beloved graffiti artist Joze (Bryan Cacy) who was killed last May by a drunk driver. “It was a huge faux pas and they were rightfully pissed,” she admits. She publicly apologized on Instagram, painted a large spray paint can with wings to memorialize him, and pasted it in well-known American Alley.

It wasn’t enough. “Yuppie eyesore garbage” came the next insult, followed by “You’re a disgrace to the community,” both hastily scrawled in the Alley. “I’m actually inspired by it,” TVB tells me. “It’s a conversation, a chance to respond and react, to up my game.” 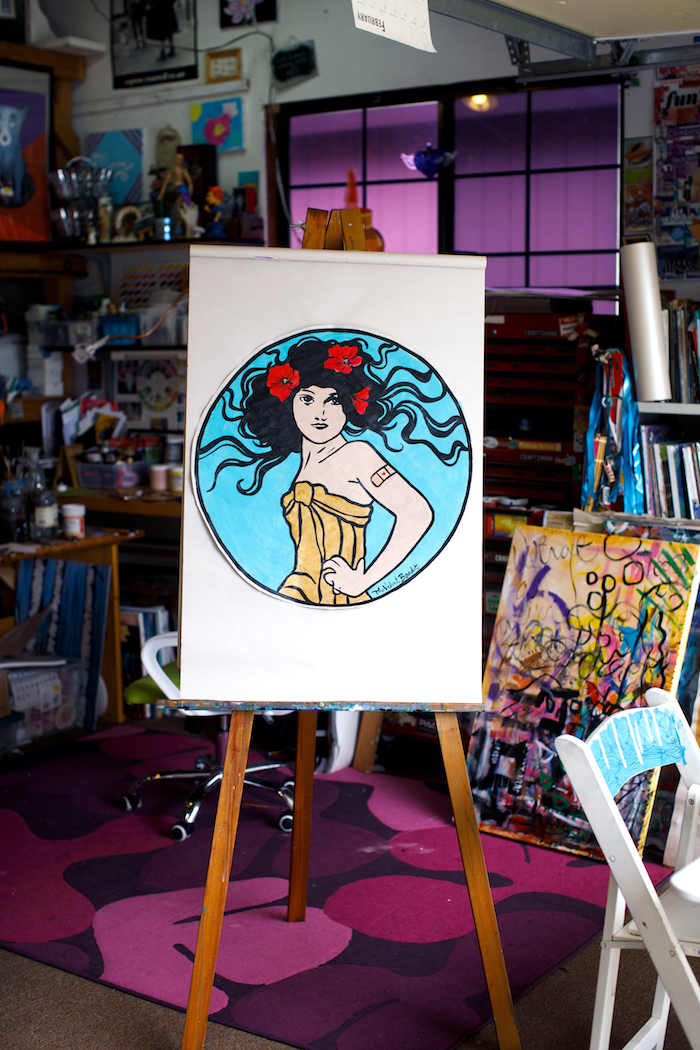 Despite the controversy, it’s clear that The Velvet Bandit is resonating with many people: her Venmo continues to swell with donations from fans, the first time her art alone has nearly supported her. Merch like stickers, hoodies, prints, and DIY kits are available for purchase on her website. Our interview is her third in a week, including one for a medical journal covering pro-vaccine art, and her paste of a masked Lady of Corona was preserved inside a mural at Mitote Food Park in Roseland. She inspired a teacher in Oakland to do a street-art unit with her students, and she’s a finalist in the 2021 North American Street Pasters Championship.

Last night she created a large Frida Kahlo, she tells me, and now she’s eyeing the gray cinderblock wall next to our table, thirsty for paint. Breaking into a smile she says, “I’m always on the lookout. This would make a great canvas.”

(The day after our interview, TVB pasted that Frida on a dumpster at Wild Flour Bakery in Freestone. Café Frida paste forthcoming.)