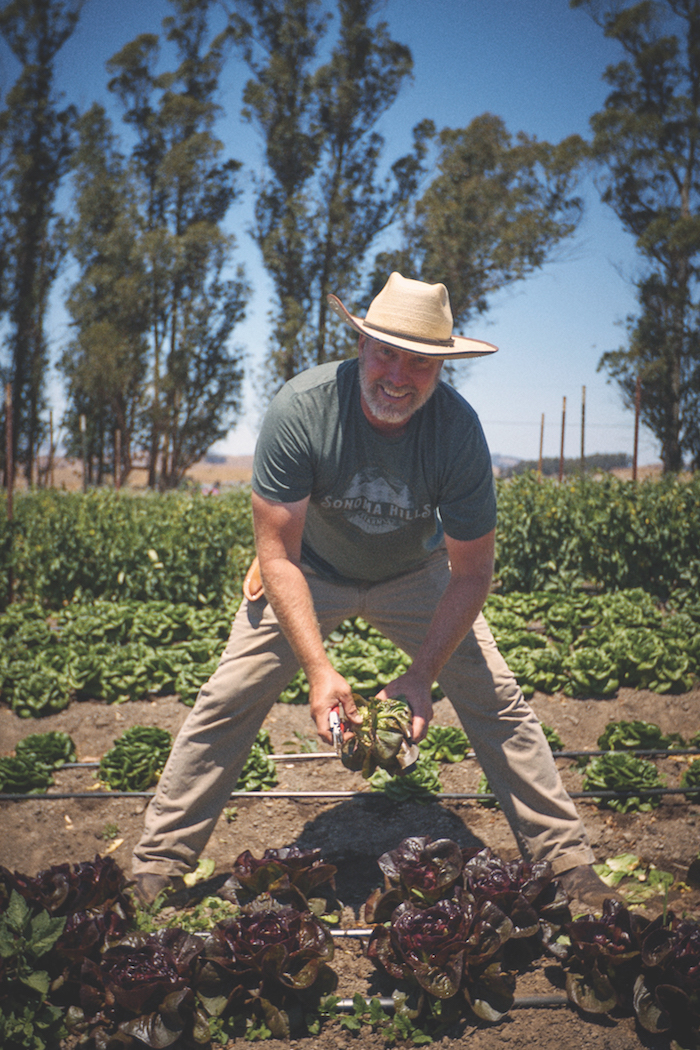 Of the many cannabis stereotypes that Aaron Keefer fights against, a predilection for cookie dough, Funyuns and Nutella-spooned-straight-from-the-jar may be the most stubborn. With prohibition over, Keefer and his partners are betting their business on a new appreciation for marijuana’s farm-to-table potential. If they succeed, it could help shape Sonoma County’s budding bud industry.

With a degree from the Culinary Institute of America and a decade at the renowned French Laundry under his belt, Keefer, now Vice President of Cultivation & Production at Sonoma Hills Farm, is attempting to bring an epicurean sensibility to cannabis. For decades, Americans toked up in basements and alleyways, always looking over their shoulders. But here, seven miles west of Petaluma, surrounded by rolling, cow-specked hills, Keefer walks alongside rows of heirloom squash and sweet corn, painting their vision: visitors sitting back, savoring a good meal, lighting up in broad daylight. From the tasting patios to the event barn now under construction, they intend to reshape cannabis in the mold of the wine industry that surrounds us.

For now, however, visitors to Sonoma Hills are limited to occasional private industry gatherings. Whether held back by reputation or regulations, the world of cannabis still has a long way to go before it rivals the tourism juggernaut of the grape industry. Even eponymous Wine Country—with its car-loads of connoisseurs, honeymooners and selfie-snapping bachelorette parties—wasn’t built overnight.

Prior to the 1970s, wine grapes were just another agricultural product here, right alongside apples, prunes, eggs, hops, and wheat. Everything changed in 1975 at the esteemed “Judgment of Paris” when underdog vino from the North Bay beat out European favorites in a now infamous blind-taste test. California vintners had begun shifting their attention from production to craft. But it wasn’t just the art of winemaking that had blossomed on this side of the Atlantic. The art of wine consumption had too. And no fine wine is complete without a good meal. Enter the tasting rooms, the Michelin stars, the gourmet pairings.

“I want to bring that same appreciation to cannabis,” says Keefer, who is currently growing 31 different strains—out of hundreds now available on the market, with new varieties emerging all the time. It’s a far cry from the get-what-you-get nickel and dime bags of Grateful Dead concert parking lots. “A Merlot and Cabernet might taste different,” says Keefer, “but the way you feel afterwards is pretty much the same. With cannabis, not only can you find different tastes, but each strain gives you a different feel. There’s just way more variety, more potential. I want that complexity of cannabis to become part of a culinary experience.” 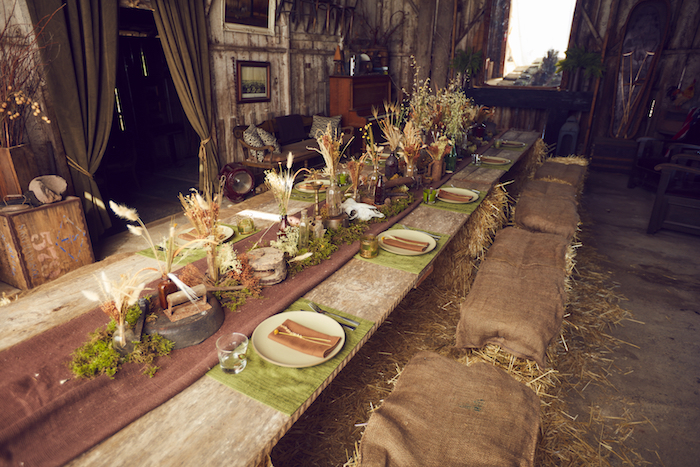 Beyond unique varieties and agritourism, Sonoma Hills also stands out for what on any other type of farm would be common sense: soil and sun. No grow lights, no hydroponics, no giant plastic hoop houses like those now appearing on nearby hillsides. By growing outdoors like any other crop, Keefer again borrows from viticulture: terroir. Last year California governor Gavin Newsom signed a bill into law giving craft cannabis cultivators the opportunity to market product from specific regions, aka appellations. Keefer is banking on the “Petaluma Gap” appellation, waxing poetic about the region’s unique climate: warm days, cool nights, salt-kissed fog, coastal winds, the artesian springs and, most importantly, the soil.

While Keefer is by no means the first to grow cannabis in native soil, he points out that during Prohibition growers typically had two options: indoors or hidden deep within faraway forested hills. What’s new is cannabis’s introduction to prime farmland, deep soil bottomlands, and easily-accessed parcels prized by other farmers who grow without fear of discovery. 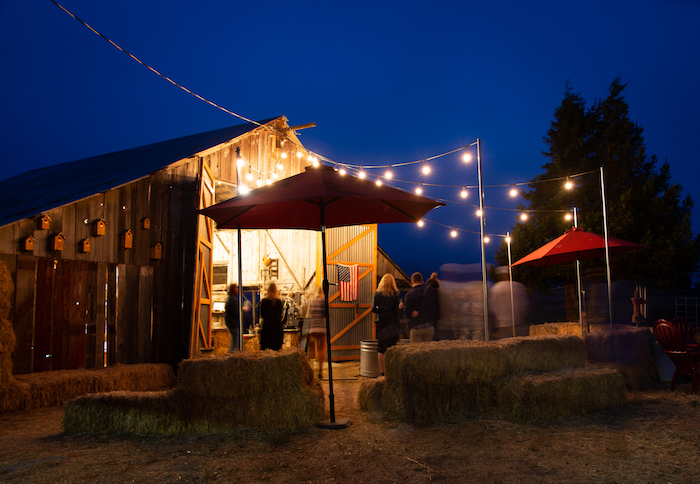 Appellations, terroir, cultivating experience—these are the tools used by the local wine industry to fend off cheaper imports and an ever-changing industry. For cannabis, change is moving at light speed. Whether its arc will follow wine, nobody knows. But if it does, Sonoma Hills will be ready.

When legalization came to California, concerns were plentiful. What about the smell? A visit to Keefer’s neck of the woods in July quickly proves his plants are no match against the more classic flavor of “Sonoma Aroma” wafting from nearby manure-spreading dairies. What about the water? Not only does cannabis require significantly less water per pound of production than most crops, but a pound of cannabis goes much further. Much further. Keefer uses 320,000 gallons for their 30,000-square-foot parcel, from which he could—hypothetically—roll one and a half million joints. That equals 0.011 gallons per joint, which for most people is more than enough for one sitting. What about the chemicals? Legal cannabis is far and away the most regulated crop in the state, with lab testing required, measuring toxicities to the parts-per-million. 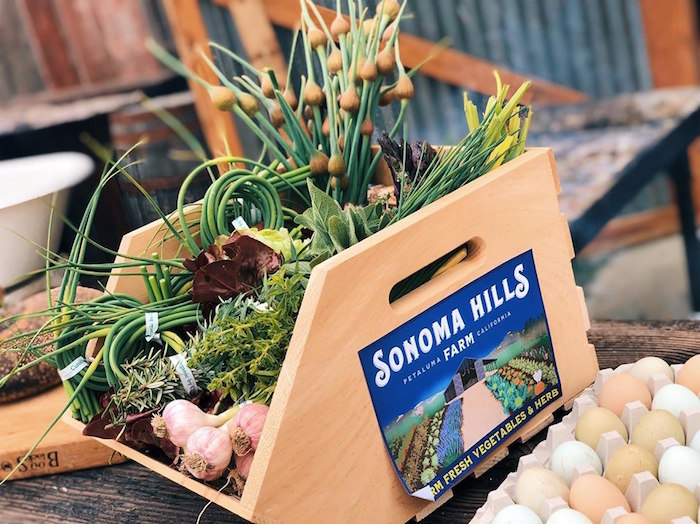 But there’s one concern that remains. When the legalization debate first raged, many advocates raised concerns about corporate agriculture taking over, about the existing small-time cannabis growers getting pushed out, and even about the industry out-competing food-producing family farms for land and labor. But while Keefer, like many wineries, may be growing food crops to accompany their primary business, a handful of farmers are seeking to leverage cannabis to accompany, or even subsidize, their primary business: food production. 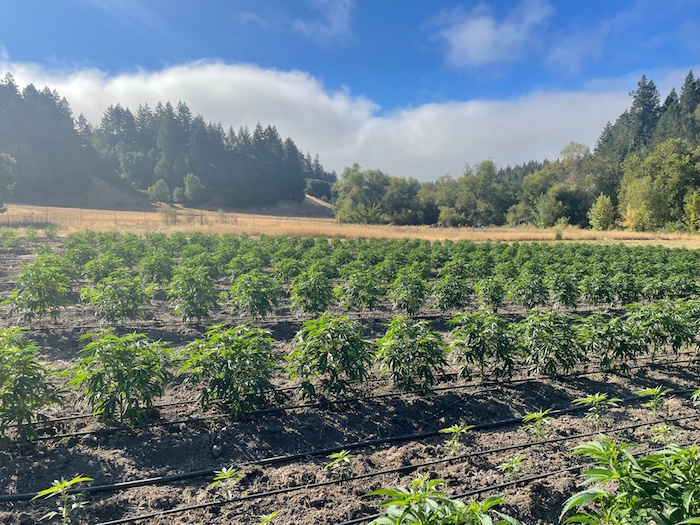 Kayta and David Plescia didn’t start farming with cannabis in mind. Their passion was, and remains, growing healthy food for their community. Five years ago they founded Green Valley Community Farm, a community-supported agriculture program where members visit weekly to pick up freshly-harvested goods straight from the farm. Families visit, harvest berries with their kids, learn about agriculture, and go home with a bounty of organically-grown vegetables. But as all new farmers soon realize, there are easier ways to make a living. “Over the past 10 years, the cost of land here has skyrocketed,” said Plescia. “The cost of housing, of labor, of everything…except food. We’ve seen farmers market price sheets from the ‘90s and they haven’t budged since then. Most people simply don’t realize that local small farmers aren’t charging what it costs to produce their food.”

When the Plescias started hearing about fellow farmers adding cannabis to their repertoire and pulling in numbers unimaginable in the world of kale and broccoli, they started crunching numbers. Then the drought hit earlier this year, and their curiosity turned into a crash course. By spring the reservoir that feeds their farm was dangerously low, and with no rain in sight, they had to cancel their 2021 vegetable CSA program. But with just a small parcel of cannabis and a fraction of the water, they could, if all goes to plan, more than make up the difference. 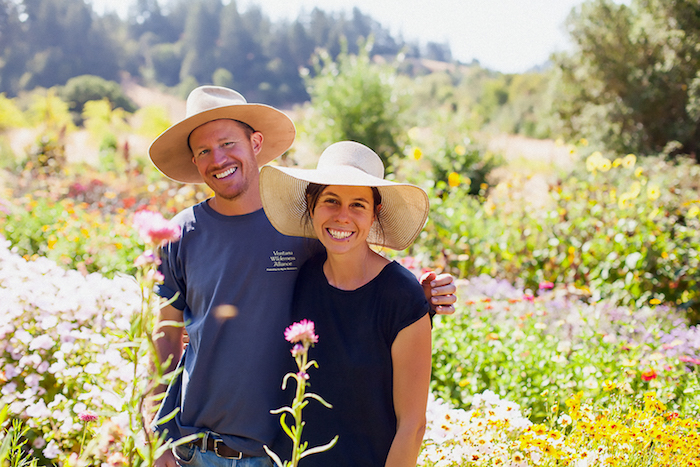 It took much more than just plopping seeds in the ground. “Navigating the permitting process,” says Plescia, “was like getting kicked in the teeth for six months. Not only was it incredibly expensive, but it was like a full-time job.” And in fact, it is a full-time job for some. Larger players in the cannabis industry now employ entire teams of lawyers just to jump through the hoops of permits and compliance. At Green Valley Community Farm, traversing the regulatory labyrinth falls on their shoulders, on top of growing the cannabis and operating a u-pick flower garden and u-pick strawberry field. However well-intentioned, the bureaucratic red tape has simply not been to the benefit of most small growers.

“The rules were obviously not written by farmers, that’s for sure,” says Ryan Power of New Family Farm, whose own food/cannabis integration was the inspiration for the Plescias’ new venture. After a decade of growing vegetables on 15 acres outside Sebastopol, Power and his business partner discovered that, technically speaking, cannabis proved to be quite the companion plant to their other crops, using similar systems of production. The profit margin didn’t hurt either, especially as both partners had young children; cabbage, they realized, wasn’t going to put them through school. But despite their success these last few seasons, Power remains cautious. “We’re getting about an eighth per pound what we did last year. There are patterns of agriculture that each crop follows, booms and busts. There’s no escaping a race to the bottom. That’s capitalism for you. Someone will figure out how to vertically-integrate, how to cut corners and produce it for less. And with the regulations so stiff, it just makes it that much harder, more expensive for the little guys to get started. The barrier to entry is just too high. It’s pay-to-play.” 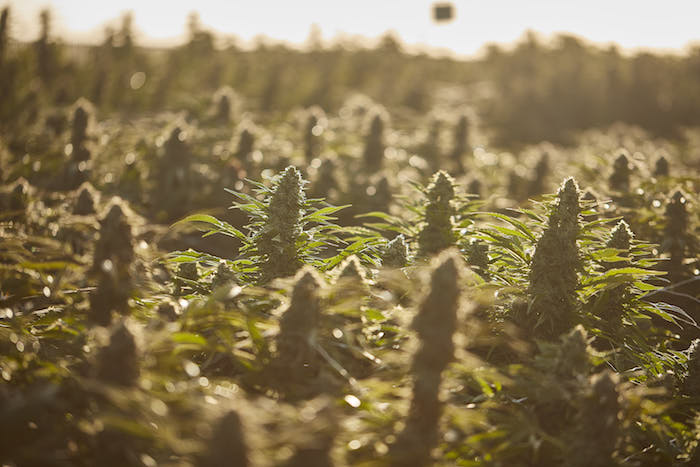 There’s an old joke that goes: How do you make a million dollars in agriculture? Start with two million. But for everyone else: What will it take for small farms—no matter the crop—to survive in a place like Sonoma County? It would seem some combination of idealism, bullheadedness, luck, or for entrepreneurs like Keefer, the added value of an experience. For Power and the Plescias, cannabis is, at least for now, a means to an end—one way to make the numbers add up in an otherwise untenable industry. “Me,” says Power, “I’m just looking for a way that I can keep growing plants.”