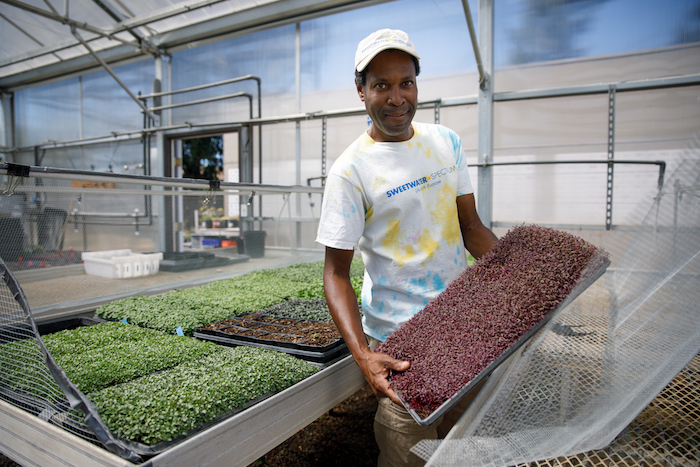 Just two blocks off the hustle and bustle of Highway 12 near the Sonoma Plaza, I press a code into the keypad of a fortress-esque private gate that silently swings open like a portal to another realm. Moments before I had been immersed in the lively stimuli of Sonoma Valley Certified Farmers Market, where there is a booth selling microgreens—mustards, broccoli, pea shoots, radish, arugula, and more—containing all of the life force of full-grown plants condensed into colorful baby sprouts bursting with vitality. I felt healthier just looking at them. 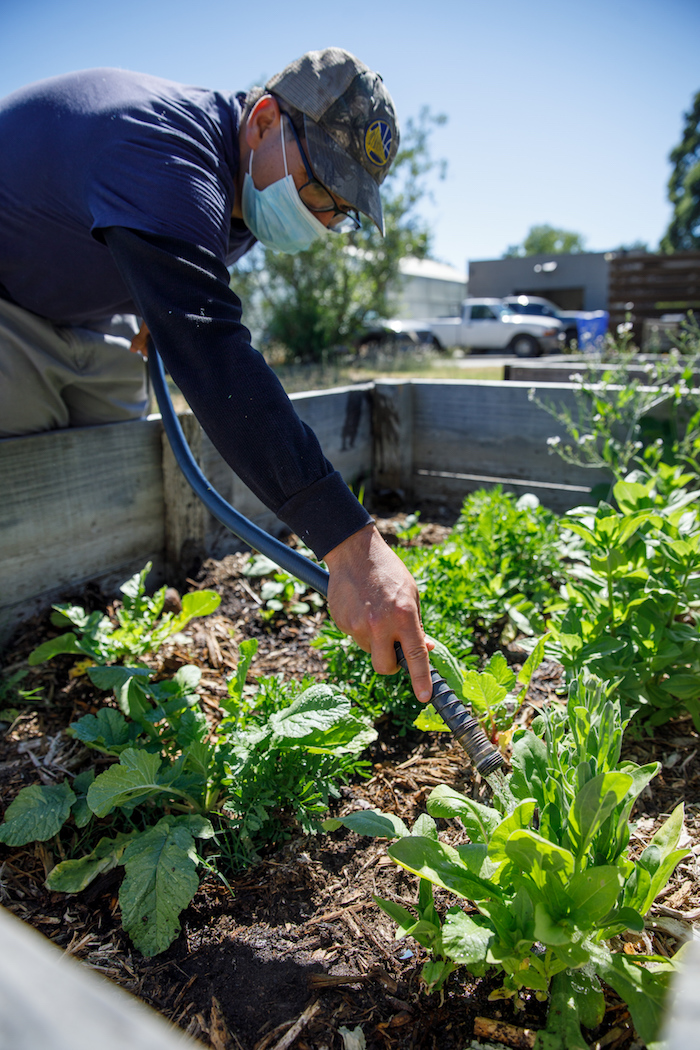 Once inside the aforementioned gate, it’s blissfully quiet, the silence punctuated only by jubilant birdsong. The estate-like landscaping hosts fluttering butterflies and lazy, sunning lizards that do not feel the need to scurry as I walk near. This is Sweetwater Spectrum, a three-acre residential facility for adults with autism. “Autistic-specific design should be calm, peaceful, tranquil, with a neutral color palette, and I think they have achieved that here,” Executive Director Kory Stradinger tells me. 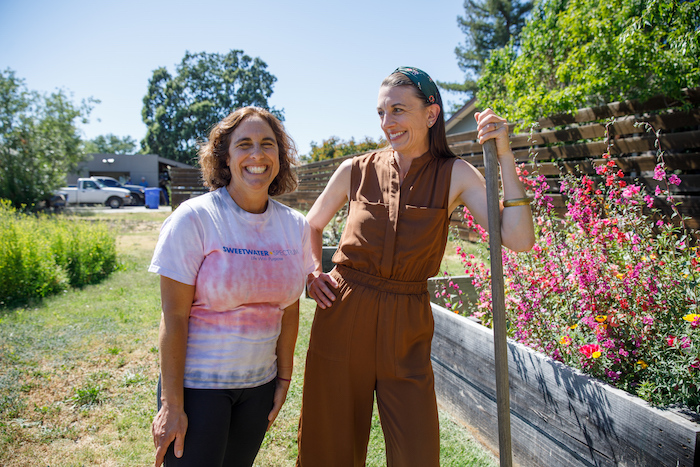 The campus, home to 16 autistic adults aged 22-44, hosts four identical residential buildings, each with four bedrooms, a bathroom, and a communal kitchen/living/dining area, as well as a pool, two hot tubs that get A LOT of use, a gym, and a community center. Enrichment Manager Danielle Beale plans 50+ activities a month, including art activities and yoga with goats. “I want to live here,” I think to myself multiple times while touring the grounds. 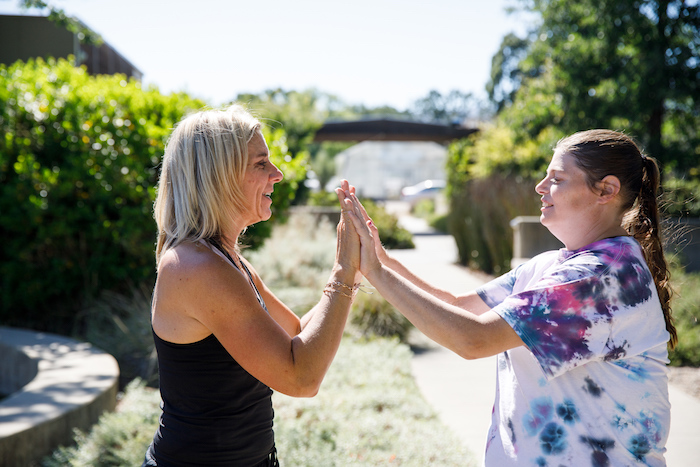 But the heart of the campus has to be the one-acre farm and its accompanying state-of-the-art greenhouse, where those enticing microgreens at the market are grown, cut, and packaged weekly by staff Master Gardener Rob Williams. “I want to live in this greenhouse,” I accidentally say aloud. 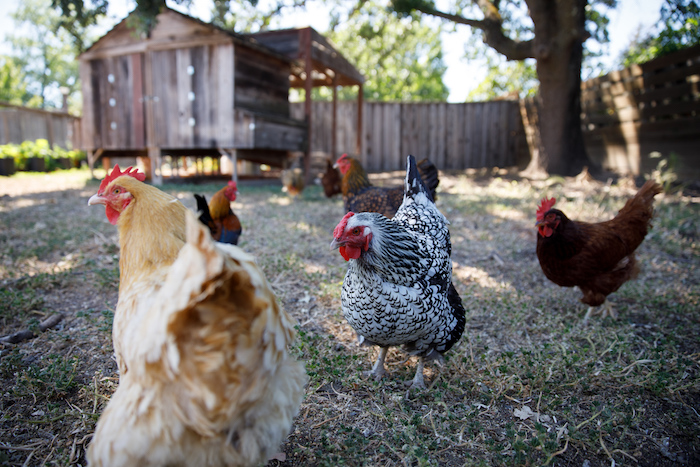 Although more than 90% of autistic adults remain in their family homes, only 15% or so want to. And even if they do want to, what happens as parents age and are no longer able to care for their children with disabilities? “In 2005, a group of Bay Area-based parents of autistic children started looking for housing options for their kids, and predictably found very few options,” Stradinger tells me, “and at some point, they realized they were probably going to have to build it themselves.” Sweetwater opened its doors to their first residents in 2013. 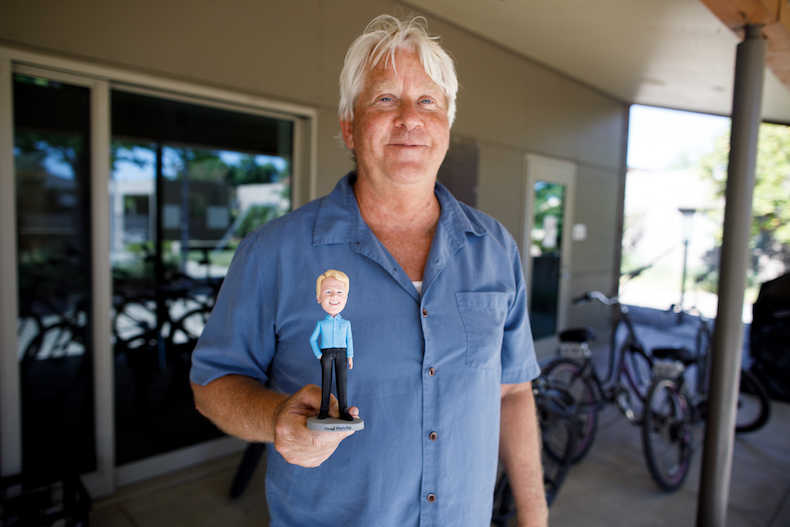 The Sweetwater Farm was an imperative part of the design, providing enrichment and work-as-therapy, and the founding parents spared no expense. While resident interest in the space waxes and wanes, it remains a central aspect of the Sweetwater campus, and serves as a bridge to the community outside of their very secure walls.

The farm has been through many iterations of operation. For a time they ramped up production with ample row crops, offering a small CSA program and selling microgreens wholesale to many of the area’s upscale restaurants, at one point grossing $80,000 per year in sales. “Unfortunately, the economics of a small farm are… problematic,” admits Stradinger. Now they’ve scaled back to more of a hobby farm.

Rob Williams, who has been the staff farmer at Sweetwater for three years, shows me the shaded row crops he is heavily mulching in preparation for the upcoming drought-inflicted summer. “Here we have some fun stuff, annuals like this watermelon and squash, you can eat the leaves and the blossoms, and perennials like the artichokes, which also make great cut flowers. For folks on the autism spectrum, it’s important to keep it simple.” 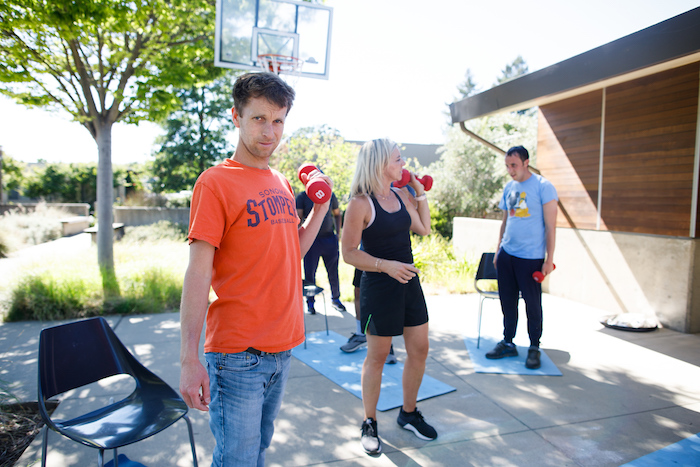 He’s also single-handedly responsible for the 120+ clam-shells of microgreens that sell out weekly at the farmers’ market. “We make more money with these than we used to make in the whole field. It’s a seven-day turn around, versus 60-70 days for squash.”

The tender loving care Rob invests into Sweetwater Farm, from the pollinator plants he’s established for the bees to the living sedum wall he created for the resident’s enjoyment, is obvious. But it is most evident when he shows me the chickens, with their palatial coop situated under a giant heritage oak tree. After harvesting the microgreens by cutting them like grass from the flats they are grown in, he dumps the soil full of high-protein sprouted seeds in the shade of the oak for them to scratch and peck. Once they have obliterated every last edible morsel, he returns the soil to the field, now full of natural fertilizer. 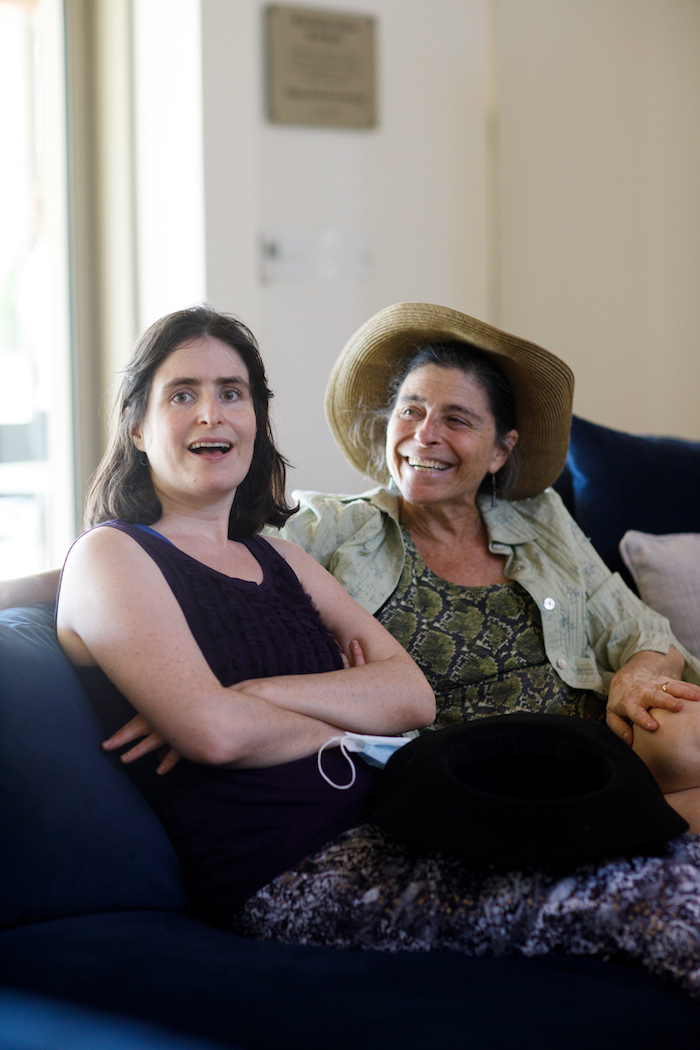 “They eat so well! This is expensive stuff!” he exclaims as he coos softly to the resident wyandottes. “I want to live in that chicken coop,” I almost say, but instead say, “Those are some really lucky chickens.”

Residents are free to harvest the vegetables, eggs, and herbs for their meals, which they cook with the help of one-on-one support staff from the state-funded organization Lifehouse. The residents also run a farm stand in the summer right outside of the campus gates, selling vegetables and plant starts to the local community. Anything leftover is donated to the nearby Vintage House Senior Center. 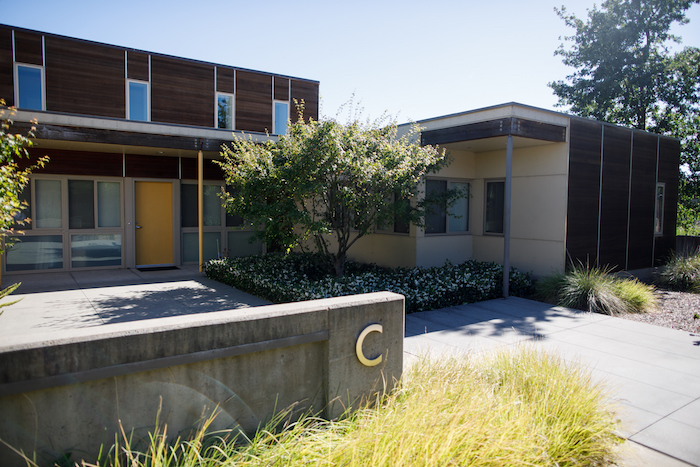 Jonathan, 38, Sweetwater’s newest resident and farm enthusiast, tells me, “I’m trying unsuccessfully to grow four carrots. Three of them I think are dead, but the fourth one has a sprout.” We commiserate a bit on the fickle nature of garden plants, and he describes in detail the strawberries he’s growing and the orange tree he bought with his own money. “The reason I want to be on the farm is to talk to Robert, the gardener. He is so nice and always teaches me something new,” he says, adding, “I’m interested in these things called microgreens. I still don’t know how they make them so small, but I’d love to learn.”

When I ask him, “How do you like it here?” Jonathan answers, “I love it. Every day is perfect.” As if on cue, the zen-like silence of the place is suddenly overcome by the emphatic intro to “Walking on Sunshine” by Katrina and the Waves. He informs me that it’s time for Body Moves, an enrichment class taught by a volunteer instructor from Parkpoint Health Club, and politely excuses himself.

THE NEED IS THERE

There is very little turnover at Sweetwater, save the high-functioning few that find themselves ready and able to take on even greater independence, with only three to four openings in the last five years. According to Autism Society San Francisco Bay Area, a staggering 5,000-6,000 cases of autism are diagnosed in our state each year, 70% of a severity warranting supportive services. That’s a whole lot of people who will be aging out of their family homes, looking for a measure of independence, with not many options available. The same organization cites that if only 3% exit the family home and enter the community each year (a very conservative number), 340 beds would need to be created in new supported living homes, group homes, and other supervised care environments. In Sonoma County alone, that equates to 5.2 new homes per year.

“Every place has a waiting list,” Stradinger tells me. “We certainly do. It’s sad—we give tours to parents from other states and their eyes just light up, but then they get overwhelmed about how to build something like this in their community.” Along with offering resources on their website, in 2019 Sweetwater held a symposium hosting 75 people from 11 states and Canada wanting to create something similar. “Last year we held a virtual six-week series of 90-minute sessions attended by over 400 people,” Stradinger tells me. “The need, and demand, is there.”

And now to address the elephant in the autistic-utopia: monthly rent at Sweetwater is $4,000 per person, private pay. SSI stipends for housing bring that number closer to $3,000 out of pocket, and although Sweetwater offers discounts to about a quarter of the residents, that number is still prohibitively high for many families with autistic children. The 16 (soon to be 20) Sweetwater residents live in a veritable Shangri-la, and their families enjoy peace of mind and a freedom that they haven’t had in a very long time.

But as I drive the idyllic Highway 12 back home, my socialist-leaning mind reels, reckoning with the idea of hundreds more young autistic adults now coming of age in an area where even that illustrious chicken coop could probably rent for a couple of thousand dollars. Sweetwater Spectrum serves as a model that desperately needs to be replicated and made equitably accessible. Any society is only as good as it treats its most vulnerable members, and everyone in need of assisted living deserves to be dining on homegrown microgreens.