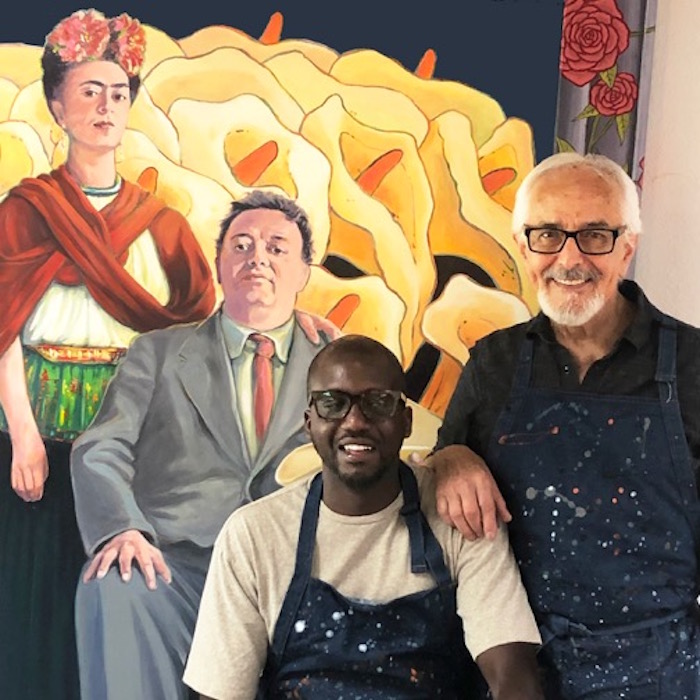 In the early 1930s, Frida Kahlo and Diego Rivera spent a night in a little house on Sebastopol Avenue in what is now the tiny but vibrant SOFA neighborhood near downtown Santa Rosa. The famous couple was hoping to meet botanist Luther Burbank, whom Kahlo later depicted as a half-tree rooting into the earth—and whose body, unbeknownst to them at the time, was already decomposing under the nearby Cedar of Lebanon tree in his front yard across Santa Rosa Avenue.

Nearly a century later, a large painting of Burbank, Kahlo, and Rivera hangs on the back wall of Café Frida, the art gallery/café/music venue started by local art legend Mario Uribe and his son-in-law Mamadou Diouf. The two laugh easy and often, and chatting with them is part history lesson, part design tutorial, part trip down memory lane. They evoke Montmartre at the turn of the 20th century and Max’s Kansas Bar in New York City during the ‘60s and ‘70s as inspiration for their vision. 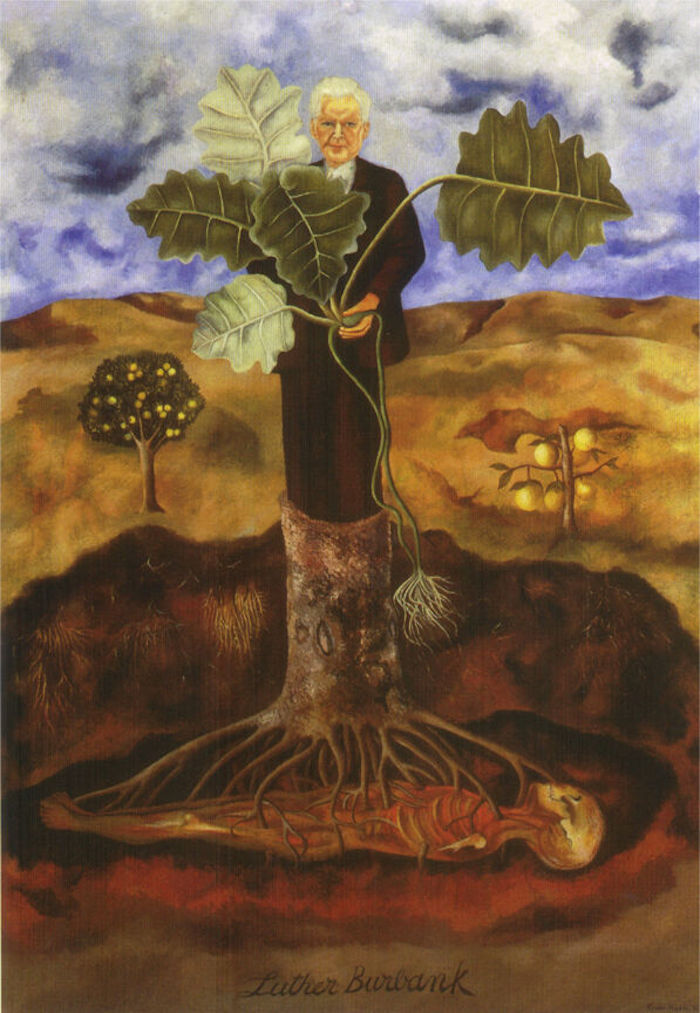 “We saw a need for a place where musicians could have an audience, artists could show their work, and people could come together to eat and drink,” explains Mario. “Plus,” he cracks a smile, “I needed a place to display this giant painting of mine.”

After purchasing the business from former Atlas Café owner James Podchernikoff, the pair spent a year renovating: building tables, re-doing the kitchen, and opting for the organic look of CDX plywood over drywall. The cool gray aesthetic with pops of bright orange (deliberate down to the to-go cups) works well in the small space. A bookshelf is stacked with dense art books on top and kids’ books on the bottom. Mimicking the floor of his studio just around the corner, Mario splatter-painted the charcoal-gray floor and backseat cushions that run along the inside wall.

The works of a featured artist—currently the Picasso-esque paintings, plates, and prints of Alejandro Salazar—hang on every available wall. “This kind of curating comes naturally to me,” explains Mario, who grew up in Mexico with parents of Basque descent.

In 1990, he attended a retreat seminar at Green Gulch Zen Center in Marin, which included Japanese tea ceremony, martial arts, and theater: “It was like going to heaven. I knew I wanted to be part of it.” By the next year he was the director, and remained so for 16 years. It was there that he met his future wife, Liz, for whom he eventually moved to Sonoma County.

Perhaps best known for his Zen-inspired circle paintings, Mario is also the creator of the mosaic rainbow trout in Prince Greenway Park next to Santa Rosa Creek and the Veterans Memorial Monument at City Hall, a circle of granite columns etched with hundreds of names of the fallen, a private commission from a group of private citizens—all veterans like himself. He loves cooking, designing, traveling, and even worked at Arthur Murray as a ballroom dance instructor down in San Diego for a couple of years—one of his “all-time favorite jobs.”

Mamadou’s trajectory is also internationally influenced: he moved first from Senegal at the age of 10 to attend school in France, then to New York City to study finance. “I was working as a busser to make money so I could enjoy the city, and I loved it,” he says. “I knew the hospitality business was right for me.” In 2004, he met Mario’s daughter Andrea, who runs the fashion boutique Tamarind in Healdsburg, and eventually became his wife, and mother of their four-year-old daughter, Stella.

But it wasn’t until he and Andrea moved to Santa Rosa and moved in with Mario that Mamadou, always a front-of-the-house guy, learned how to cook. Mamadou recalls Mario pan-frying leftover sushi so that it tasted like fried rice. “I was inspired, I had to learn more,” he recalls. 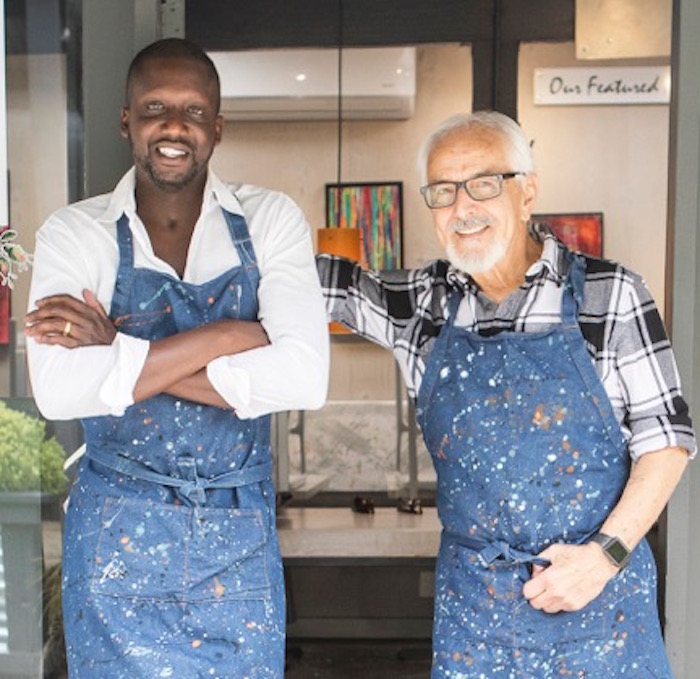 These days the two work together to develop mind-bending menu items like the bahn mi dog and the Mex dog, both with the kind of toppings you would expect, but delightful in ways you might not. “We start sharing ideas, and then our brains just blow up to the extreme,” says Mamadou, whose keen attention to detail comes in part from working for the Starks for so many years (he previously managed Stark’s, Bird and the Bottle, and Willi’s Wine Bar; Mark even helped set up Café Frida’s kitchen).

In addition to this creative whimsy, they also offer a good variety of reliable café fare that draws upon their Mexican and French heritages, including breakfast burritos, ham and cheese on baguette, an assortment of both sweet and savory croissants and toast, and the Like a Niçoise salad with greens, tuna salad, egg, and pickled onions. Also available are kid-friendly waffles topped with either fruit and syrup or smashed avocado and lemon zest.

The café is set back from South A Street, and the tucked-away patio, with its mosaic bar, teeming planter boxes, and plenty of shade, is perfect for both contemplative notebook time and Sunday afternoon concerts (they’re already booked through December). Libations include all manner of coffee drinks— Mamadou sources a special Café Frida blend from Contraband Coffee in San Francisco—with surprising latte flavors like rosemary sage and lemongrass matcha, and an expert selection of beer and wine.

Art is everywhere in SOFA: the dramatic tintypes in the windows of longtime Jeremiah’s Photo Corner, the Velvet Bandit’s subversive graffiti, various studios, and all those circles of Mario’s—which are the perfect embodiment of this new endeavor. As he says, “Almost everything I do involves circles. They represent wholeness and completeness, and bringing people together.”