Taste of the Wild

On a blue-skied and breezy afternoon in the Shady Oak beer garden, a comfortable outdoor patio alongside the Santa Rosa creek, brewer Steve Doty and I are here to talk about his journey into sour-beer brewing. But first we’re talking felines. 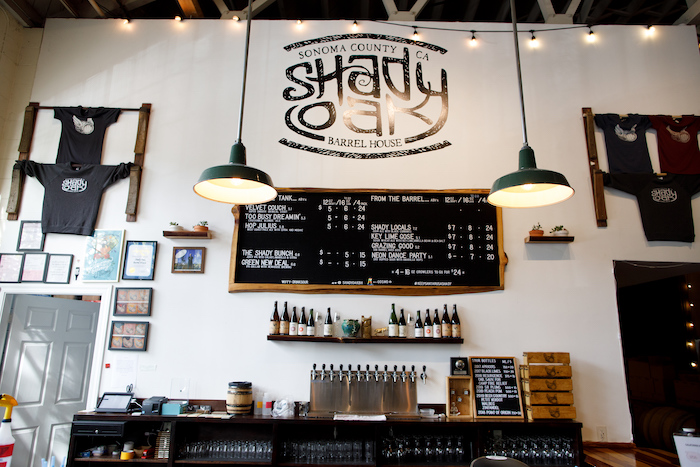 “I’m sorry if I seem distracted, we can’t find Cosmo,” Steve tells me with a furrowed brow. Cosmo, the barrel house’s super friendly volunteer pet and de facto mascot, has been gone for over 24 hours. The sleek black kitten miraculously appeared at the barrel house sometime in August of 2020 (a morale-boosting omen in a hard year) and made himself right at home. Visitors can usually find Cosmo rubbing ankles in the beer garden or climbing the hundreds of barrels stacked like mountains inside the cavernous yet cozy industrial space that Shady Oak calls home. Sarah Greer, GM and part of the “Shady Bunch,” tells me, “the vet thought he was born sometime in April, so we are calling his birthday 4/20, on account of our address (420 First St.). We are already planning his birthday party.” 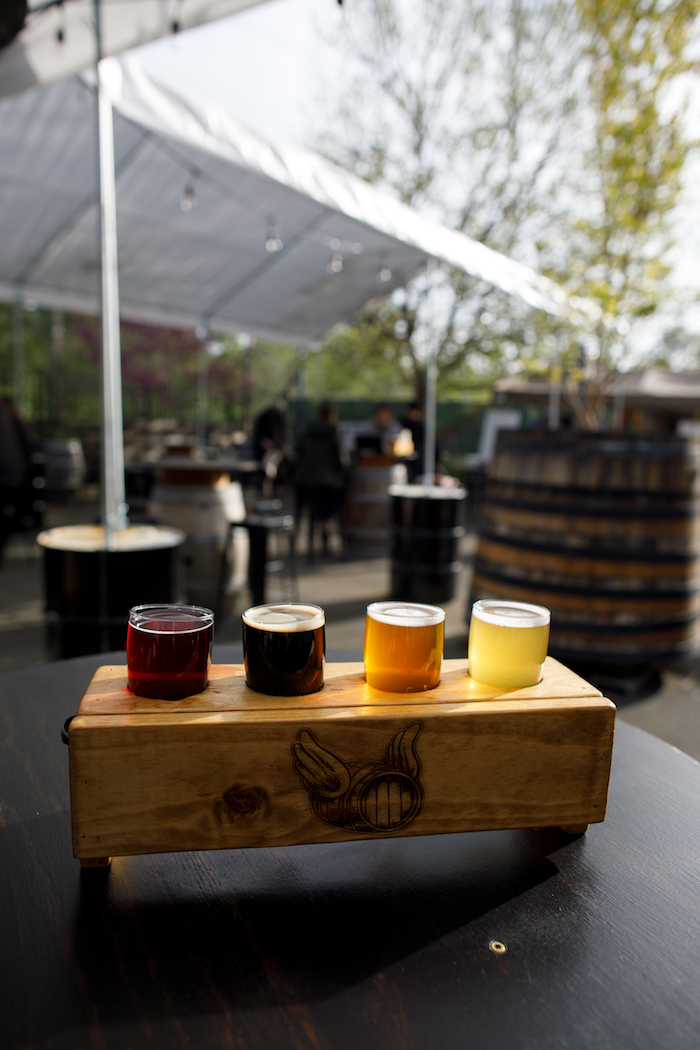 But for now, back to beer. “I’m obsessed,” Steve tells me. “My dad got me my first home-brew kit when I was 16, so it’s all his fault. I was immediately hooked.” When I question this parental choice, he says, “I think it’s a wine industry thing, to introduce kids to alcohol at a young age in hopes that they will respect it.” Steve initially followed his father down the wine industry path, working as a lab tech at a prominent winery in the Napa Valley. It was there that he became intimately familiar with the wild yeast strain Brettanomyces, a scourge of the wine industry, that imparts the particular sought-after characteristics of sour beers.

When Peter Bouckaert, a famous sour-beer-brewer, happened to be in his winery one day, Steve told his boss, “fire me if you have to, but I need to hang out with this guy for a while.” That chance encounter left Steve with the confidence he needed to try his own first batch. After a series of twists and turns, including a bad marriage, a lackluster job, and the acquisition of an English degree, Steve had a choice to make. “Here was this one passion that had kept me going. I knew I wouldn’t make money doing this, that I’d be working all the time, but I was used to that. I just wanted to do what makes me happy.”

Steve’s home-brew hobby had already generated some paychecks, thanks in part to entering and winning KOFY-TV’s 2011 reality show BYOB with his extra hoppy Pale Ale. Once he started brewing sours, those also quickly garnered awards and accolades. Steve set up shop and christened the Shady Oak brand, started bottling sour beers for distribution, and was soon finding his beers all over California. He tells me, “within the first six months I had all my loans paid off, so I figured I was doing something right.” 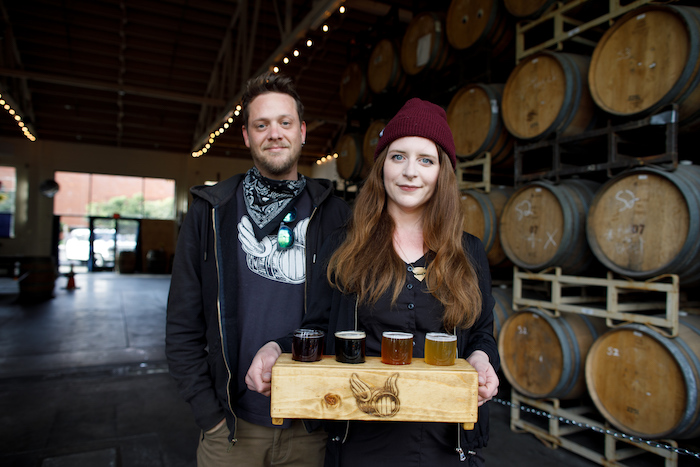 The beers on tap the day I visited ranged from pleasantly tart to searingly sour. I was instantly drawn to the jewel-toned Shady Locals, a refreshing sour ale made with black currants. But the real surprise was their Key Lime Gose, a subtly tropical sour wheat ale made with lime, vanilla bean, and sea salt that paired perfectly with the tacos being served by the truck parked in the beer garden that day. Also on tap were a few IPAs, a blonde ale, and a stout dubbed “The Velvet Couch.” When I ask him about including these more typical beers he shrugs and says, “Every restaurant needs a cheeseburger on the menu, I get that.” 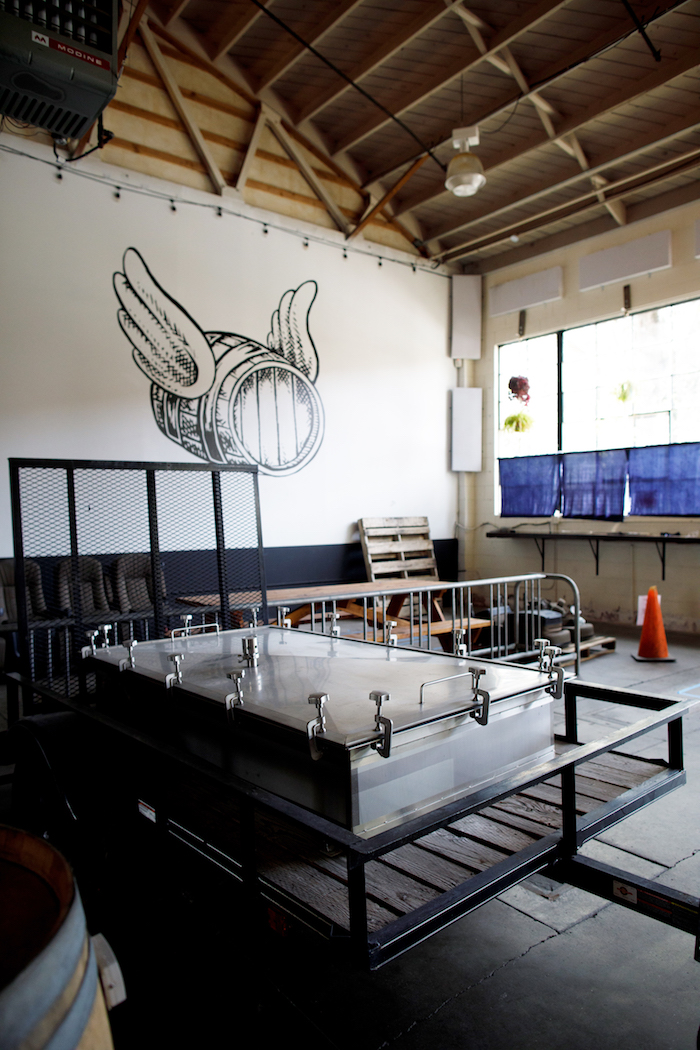 Though beer brewing is very much a science, Steve considers the creation of sour beers to be more artistic. True to his character, the wildness appeals to him. “There’s something about the scavenging, the not-built-up-in-the-lab nature of it, that clicked with me. The wild stuff really expresses terroir—you can smell the orchards in there.” 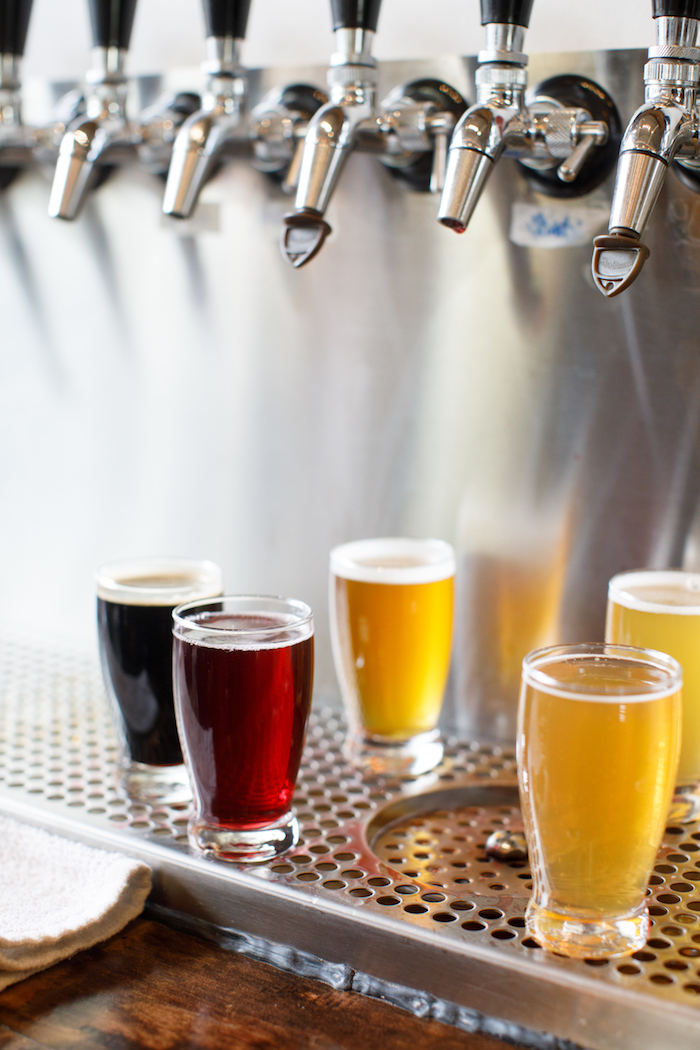 While a traditional-style beer can be brewed in about two weeks, the Shady Oak sours are aged in a variety of previously-used barrels for an average of two years. This exercise in optimism means that these brews are created with the hopeful confidence that customers will be around to drink them when they are ready, fires and pandemics be damned. Steve lightheartedly calls this “an interesting business plan.” I call it a mad-scientist inspired labor of love, and he agrees.

There are a whole litany of wild yeasts and bacteria out there, but as far as what can survive in alcohol there are two main players: Saccharomyces, the domesticated “clean” strain commonly used in brewing, and the aforementioned rogue Brettanomyces. An opportunistic and hardy organism, Brettanomyces is everywhere (you’re probably breathing them in right now), and every barrel contains them, as they live in and feed off the sugars in the wood. They are also hosted by the fruit Shady Oak uses to make their many rotating varieties of sours.

Steve talks about this yeast like an old friend, but tells me, “in the wine industry you don’t even utter the word Brett, it’s like the boogeyman.” If a batch of wine starts to display characteristics of Brett, the batch is automatically scrapped and the barrels retired. When re-purposing these used wine barrels for his brews, Steve sniffs out the Brett like a hound dog, preferring the ones that have been the most “contaminated,” and often getting them “dirt cheap, if not free.”

“You can control it somewhat, but it won’t always do what you want it to. It surprises me all the time, especially in our Coolship stuff,” says Steve. The Shady Oak Coolship, modeled after Flemish koelschips of the lambic tradition, is a large, flat, open-topped vessel, described by Steve as “like a cake pan on wheels.” The mobile Coolship can be transported anywhere, and is left uncovered while the wort cools overnight, capturing strains of wild yeasts in the vicinity. Initially crowdfunded, Shady Oak pays it forward by loaning the Coolship out to other breweries eager to try their hand at capturing the flavors of the wild for their own brews. 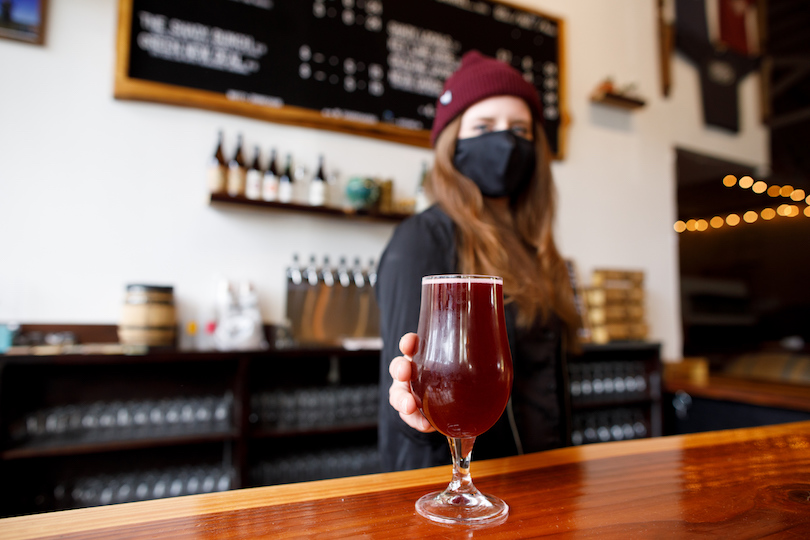 “It’s a great opportunity to find a sweet spot to camp for the night and make some beer. I’ve brought it to peach orchards, cannabis farms, and even made our flagship batch in downtown Santa Rosa. I was so excited to try it out that I parked it right here in the parking lot and stayed up all night just watching it.” He adds, “When I taste one done right, I tear up. It’s incredible—like, our planet did this.”

With COVID restrictions relaxing, live music and events on the horizon, and the weather being prime for patio drinking, things are looking up, even on a day soured by a missing beloved cat. (I literally cheered aloud the next day, reading Sarah’s Instagram update that Cosmo was home safe).

Ultimately, what keeps Steve working 80 hours per week is his love for filling barrels. That initial Coolship batch, which had been aging since 2018, was bottled in September of 2020. “I figured, if we’re going down because of the pandemic, if bottling this batch is the last thing I do, I’m okay with that.”