Out back of an unassuming warehouse tucked off the main drag of Santa Rosa Avenue, tons of decommissioned fire hose from the 2019 Kincade Fire and the 2020 Glass Fire sit coiled up like giant piles of spaghetti. Inside the colorful, organized factory retail store are the same, almost unrecognizable fire hoses, upcycled into floor mats, dog leashes, belts, key chains, zipper pouches, and coasters. A portion of the sales are donated to Forestry Crabfeed, a local nonprofit organization founded by Cal Fire employees to support local firefighters. Welcome to Tek Tailor, where these kinds of “gifts with a heroic past” are the creative output of visionary owner Steffen Kuehr. 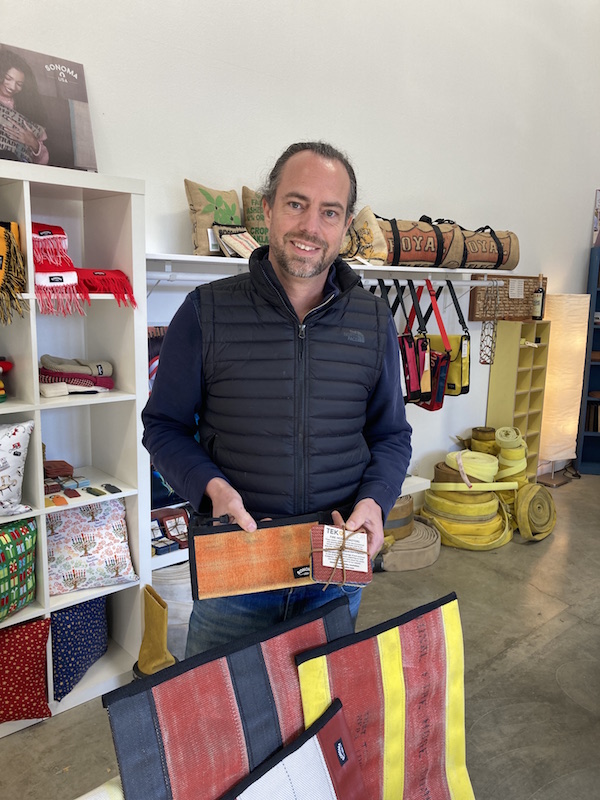 “I want to move away from throw-away culture and run a business that can be a force for good,” says Steffen, who started Tek Tailor in 2015, a rebrand of his in-laws’ sewing factory that they started in 1990 to make protective gear. Over 200 backers from 12 countries contributed to the $33k he raised in a Kickstarter campaign to help launch the upcycling business. While the certified green company has continued making knee pads, back support belts, and other athletic gear, Steffen was inspired to create a circular economy that supports local businesses, repurposes used materials, conserves energy, and offers truly unique, high-quality products.

Originally from Germany, Steffen moved to the States in 2007 and was surprised to find a much more disposable culture than he was used to. “As a kid, I remember the truck delivering glass bottles of seltzer and lemonade twice a week,” he tells me, explaining that grocery stores also offered a refund station for returned bottles. Here in the US, the EPA estimates that 75 percent of our waste stream could be recycled or composted, but only about 34 percent actually is. Perhaps the most potent form of waste-diversion is simply rethinking what we define as trash.

“These are grain bags used to deliver wheat berries to Alvarado Street Bakery,” says Steffen, pointing to a pile of massive white bags stored up near the rafters in his warehouse. Owing to food safety regulations, bags like this are typically, tragically single-use items that get tossed after serving their hauling purpose. But in Steffen’s world, they get upcycled into messenger bags, tote bags, and Dopp kits—and 5 percent of their sales are donated to the Ceres Community Project.

It all started with a conversation with Steve Page, the (recently retired) president and GM of Sonoma Raceway, who met Steffen on the board of the North Bay Leadership Council—“and thus began the beginning of a beautiful friendship,” Page tells me. Distressed by the tons of discarded banners being hauled to the landfill, he was all too happy to save the dump fees and see them turned into double-bottle wine holders that they gave as gifts to team owners, clients, and drivers. Several styles of Sonoma Raceway duffle and tote bags can also be found on Tek Tailor’s website.

“Why buy all this cheap import swag when your old marketing materials can tell such a strong story?” emphasizes Steffen, whose goal is to establish more new partnerships with local businesses. 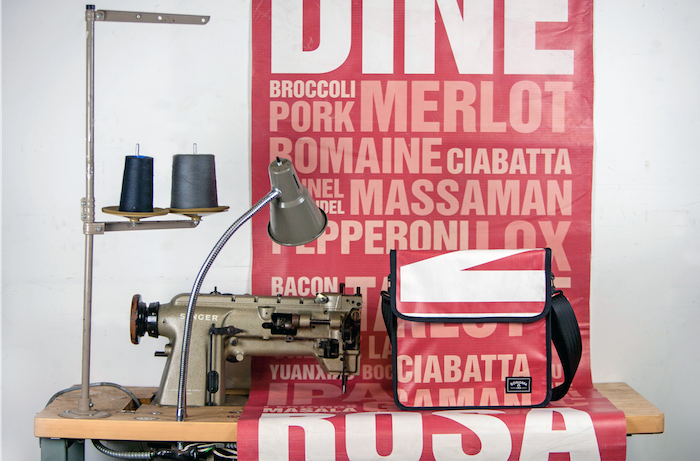 Naturally durable and water repellent, vinyl banners and advertising billboards are ideal materials for long-lasting bags—just ask his wife Leila, who’s been hauling her banner tote to the library and the weekly farmers’ market for five years. “She even throws it in the washing machine and dryer,” Steffen tells me, “and it’s still in great shape.” Another advantage is that each product is totally unique, like the 300 tote bags recently made from Clover Sonoma’s 50th anniversary billboards, each with an image of the original billboard sewn inside so customers can see which part of the beloved billboard theirs is sporting.

“We need to move away from mass production and embrace more on-demand manufacturing,” asserts Steffen, who also offers custom contract sewing and cutting, fabric and garment printing, as well as foil-stamping. When the pandemic hit, “the mask business saved our lives,” with clients like the City of Santa Rosa, Recology, Redwood Credit Union, BART and Friedman’s. In the vast production room filled with some 70 sewing stations, piles of sky-blue masks share a table with finished meditation cushions covered in organic cotton for another client.

Similar to the “snout to tail” ethos of pig farmers who seek to waste not one part of the animal, Steffen’s goal is to use every part of the discarded materials in the service of something new. He hoards bins and bins of scraps—leather bits, twine, small fabric squares—neatly organized around the store. Heavy tablecloth fabric from a linen rental company in Napa (rendered unusable after just one stain or burn) recently became the cover of a customer’s new headboard. Another scored some shiny fabric to make a dress for her daughter’s quinceañera. Giant cardboard tubes rest in a corner, saved for the Children’s Museum. 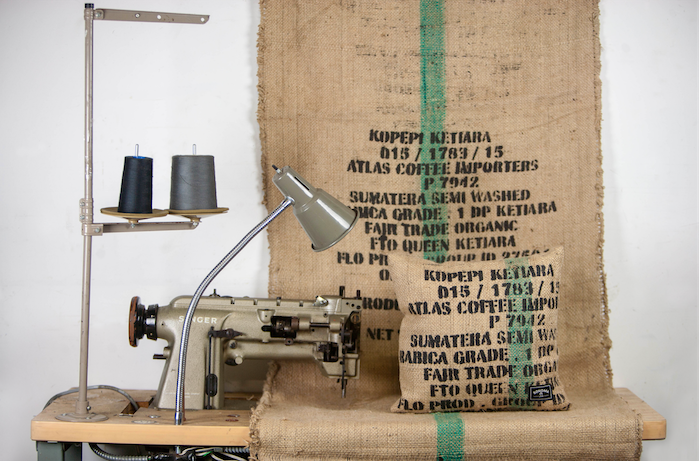 Much like Green Mary, who sometimes delivers a load of event banners, Steffen has cultivated more than a business, it’s a way of life. He sits on the advisory board of the SRJC’s Fashion Studies Program and helps first graders at La Fiesta Elementary in Cotati with an annual project in which the students design and create infomercials about their own upcycled products.

An old school bus destined to be a family RV sits in one corner of the warehouse. In another there’s a stash of old motorcycles that he’s been tinkering with. An avid photographer, Steffen has traveled all over Europe, Australia, and Egypt, much of it on his bike. “I’m not a mechanic, but I can learn how to fix some things. Watch some videos, figure it out.” He shrugs. “I like keeping things alive.”

No Can Stands Alone