In with the Old

GreenLynx and the World of Reuse

“There are so many different lives that a 2 x 4 can have,”

muses Nicole Tai on a warm July morning. As I follow her through the bright, airy showroom, her words transform what I initially perceive to be just stacks and stacks of wood, much of it leaning against the walls, organized by size and shape. There’s the distinctly dark old-growth redwood, sometimes confused with aging Douglas fir; there’s a box filled with bits of lovely purplish tropical hardwoods

donated from a widow whose husband was a tinkerer; there’s the unremarkable-looking pile of lath that actually contains many varied hues, making it a perfect choice for decorative jobs—on display, Tai tells me, in both the ceiling of the Sweetwater in Mill Valley and the new take-out counter of B Star on Clement Street in San Francisco.

Tai is showing me around GreenLynx, the reuse store she runs with business partner Brandon Bugge. Actually, GreenLynx is more than a store: it’s also a deconstruction, reuse logistics, green consulting company. And after spending nearly three hours listening to these visionaries talk, I come to see that GreenLynx is also an ideology. 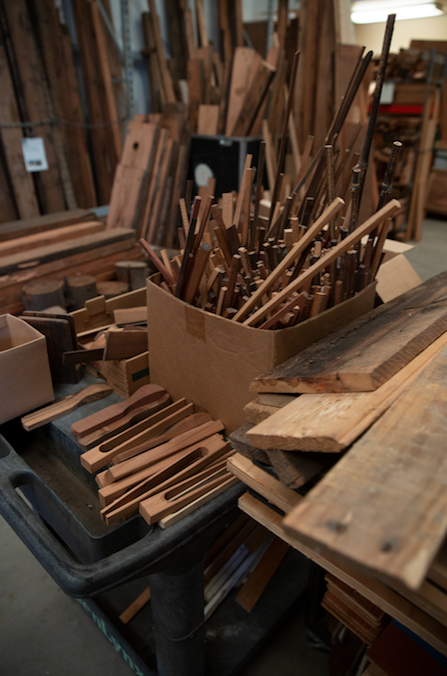 “Reuse should be a higher priority than recycling when it comes to wood,” Tai continues, “because it sequesters carbon. It can live on for years.” Instead, wood is being turned into energy—which is great for our campfires and energy grid but, ultimately, unsustainable. Tai, one of the few women in Northern California’s deconstruction business, tells me that the landfill near where she lives in Novato no longer smells bad—because they’re covering it with wood chips every night. But what’s good for the olfactory isn’t necessarily what’s best for the environment.

“We’d like to save enough lumber to curb forestry,” says Tai, explaining that the lynx of their name, which relies on the forest for survival, is a good representative of their struggle. “It’s wood-ageddon for the waste industry right now.”

Why? Because there’s a crucial difference, I soon learn, between demolition (which is quicker and cheaper) and deconstruction (which involves intentionally and “surgically” taking a building apart the opposite of the way it was put together). “When you deconstruct instead of demolish,” Bugge explains, “you can keep 85% of materials by weight out of the landfill.” Bugge, who started logging as a 10 year-old in Oregon before moving into demolition work, recounts the ugliness of smashing houses—and wasting not only the perfectly good materials, but all the natural, human, and fossil fuel energy that went into harvesting and processing them.

“We live in a throw-away world,” he continues, explaining that about 10 percent of the demolition jobs are “mind-blowingly unnecessary,” like a four-month-old home with a brand new oval bathtub or $12k gas fireplace that can, and should, be saved and reused. Deconstruction also allows you to responsibly dispose of toxic metals and mercury. “That’s what you can do when you touch all of the materials,” says Bugge. 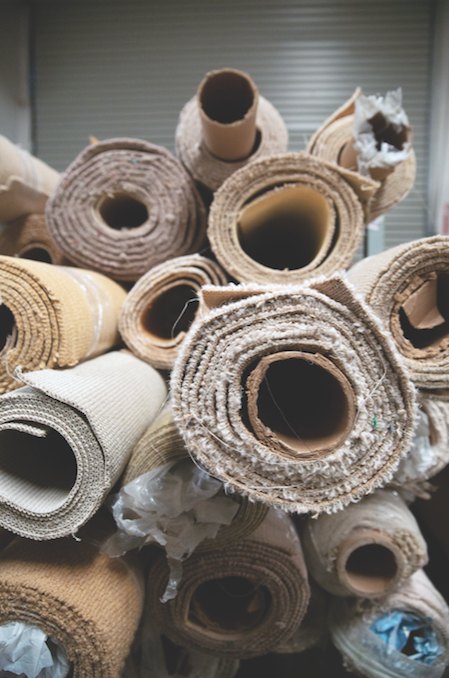 In 2009, Bugge moved to Montana and opened the first “green” deconstruction organization in the state. Though he occasionally met with hostility from shotgun-wielding men calling him an “environmentalist,” in 2012, he also met his future wife Elizabeth while deconstructing log barns built in the 1890s. Two months later, he sold the business and moved with her back to Sonoma County.

As we continue our tour around their 10,000-square-foot property, which includes 2 huge showrooms, lots of outdoor space, and a shop where woodworker Jeremy Gallegos turns reclaimed wood into gorgeous new tables, Tai and Bugge explain the unique aspects of their business.

“The tail wags the dog,” says Tai, “because we get our supply first, then hope there’s some demand for what we have.” She points out a huge skylight reclaimed from a stairwell in a home on Belvedere Street in San Francisco, worth about $3k. But she just sold it for $250—to a guy who’s going to use it as the roof of a potting shed—“Because it’s big and breakable and I want it to move,” she says. “Our goal is to get things on display and sold so we have room for the next load.”

“There’s nothing to be competitive about,” Tai tells me, chuckling, when I ask about other reclaimed material businesses. “There’s so much material and so many customers! Our real competition is Home Depot and societal norms, people valuing the new over the old.” In the spirit of what she deems “co-op-itition” they’re working on a website that would allow for other reuse businesses to share their inventory, which would better serve customers—many of whom come from as far away as Modesto and Santa Cruz, and who Tai happily refers elsewhere if she doesn’t have what they need.

Out of the Landfill

Tai grew up in Mill Valley, and during summers off from college and grad school—she holds degrees in Conservation Resource Studies from Berkeley and Community Development from Davis—she’d go to work for her grandfather Dale Nielsen, a former Army officer and Peace Corps and Army Corps engineer. In the 1980’s, having retired from the military and in his early 60s, he started a general contracting company in San Francisco which “remodeled just about every commercial building south of Market.” 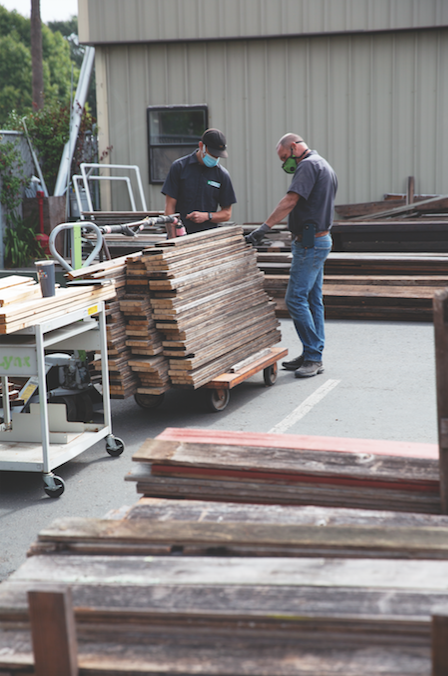 She explains that typically the bones of commercial buildings are left intact, but when a web company becomes a gym or an office building gets transformed into a school, everything inside gets gutted. During the dot-com bust of 2000, Tai remembers a tech start-up being demolished before the company had ever moved in.

“I was driving the dump truck,” Tai recalls, “and felt so frustrated seeing all this perfectly good material—toilets, lights, desks, tiles, shelves, sinks, carpet—go to waste.” So, instead of paying landfill fees, she scouted places she could sell to—which not only made her feel better about the deconstruction waste but also paid her salary.

“He thought I was crazy,” Tai says, laughing, about how her grandfather (a father figure to her since her own father, a Navy pilot, died in service when she was a baby) reacted to her wanting to save materials from the landfill. “I had to prove that I can do this.”

And she did. In 2000, she brought her vision and skills across the country and spent a year developing a website for a nonprofit called New York Waste Match funded by the Department of Sanitation of NYC. She recalls speaking in front of the city council and navigating the tricky terrain of old-code politics (for profit only, no donating). Thanks to the website she helped create, businesses could connect with other companies that had reusable materials and parts they might need. One customer was a company that used cast-offs from fabric companies to create some of the first messenger bags in the city.

After moving back to the Bay Area in 2005 and, again, working for the family business—by now in the capable hands of her mother, Barbara Egger—Tai started consulting with contractors on deconstruction inventory and donations but found that many businesses didn’t want to bother with donating to nonprofits. So she started stockpiling materials on her mom’s nine-acre property in Sebastopol until Egger, who is CFO of GreenLynx, insisted, “You need to get a store.” 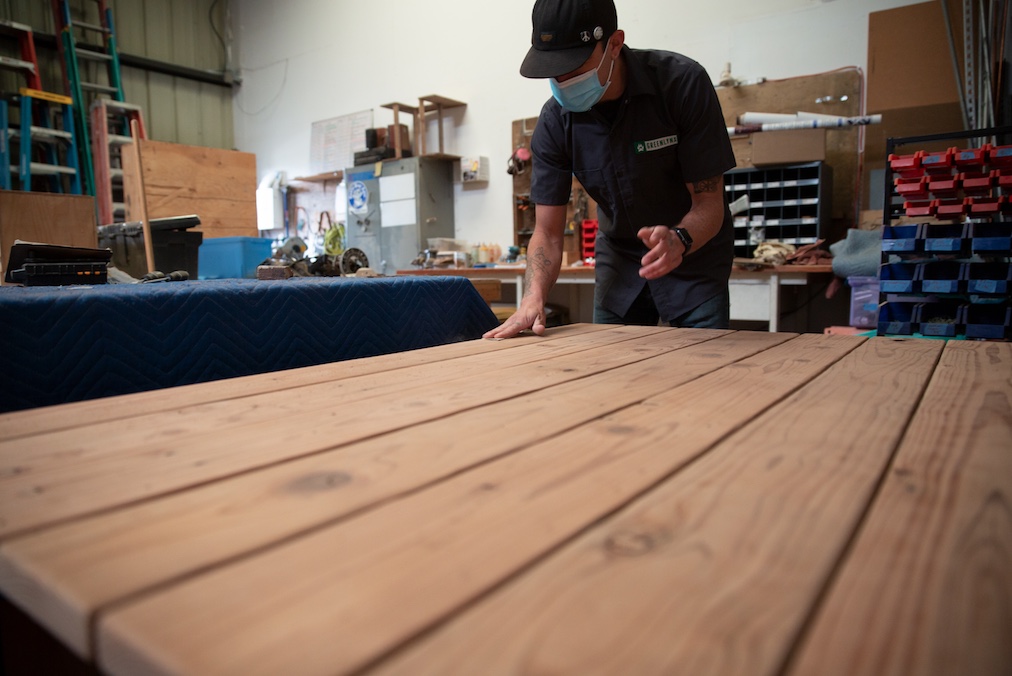 “We immediately hit it off,” Tai says of meeting Bugge in 2013. “She’s his work wife,” quips Bugge’s wife Elizabeth. “They have great synergy.” Both Bugge and Tai (who has two children with husband Cho) have their fingers on the pulse of the reuse life system, their knowledge extending far beyond this county. They tell me that Portland, Oregon was the first city to pass a deconstruction ordinance for anything built before 1916; Palo Alto just passed a similar one, and San Francisco’s is in the works.

“It’s important to have a voice in order to make change in this industry,” Tai emphasizes. After our enlightening talk, I open my email to find no less than 14 links to articles, nonprofits, and advocacy groups that Tai has started—including the Bay Area Deconstruction Working Group, Reuse Alliance, and the Women’s Build Group in Marin—even her TED talk on the subject. Their involvement extends all the way up to the EPA, which hired Tai and Bugge to do a training for the Hopland Band of Pomo Indians, showing them how to salvage parts and pieces from their old mobile homes to sustain their existing homes. 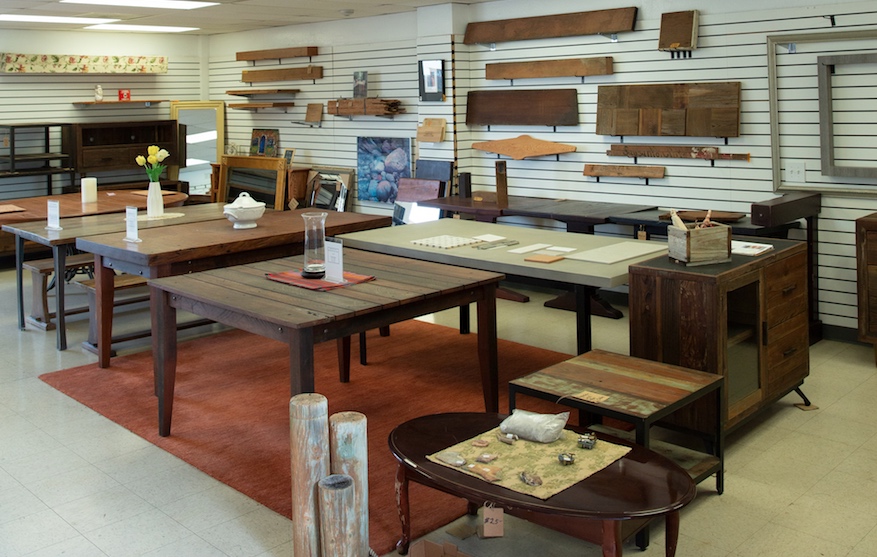 “Many organizations like us are dying out because of labor costs and brick and mortar costs,” Tai explains, noting that they searched for two years to find a storefront they could afford. Their labor force has shrunk a bit during the pandemic, but during our tour, I meet Rotna Pech in processing and Danny Parenti, the deconstruction foreman and expert picker who, according to Tai, can see what most people can’t. He shrugs and says, “I like junk.”

Despite the challenges, Tai and Bugge are hopeful about the future of reuse, especially given the realities of climate change and the renewed interest in zero waste. Yes, removing all those nails from all those boards of lath took some time and energy. But time spent giving something new life is undeniably time well spent.

As Bugge puts it, “We’re saving embodied energy—for our community and our planet.”

Waste Not, Want Not