Waste Not, Want Not

A Day on the Ground with Farm to Pantry 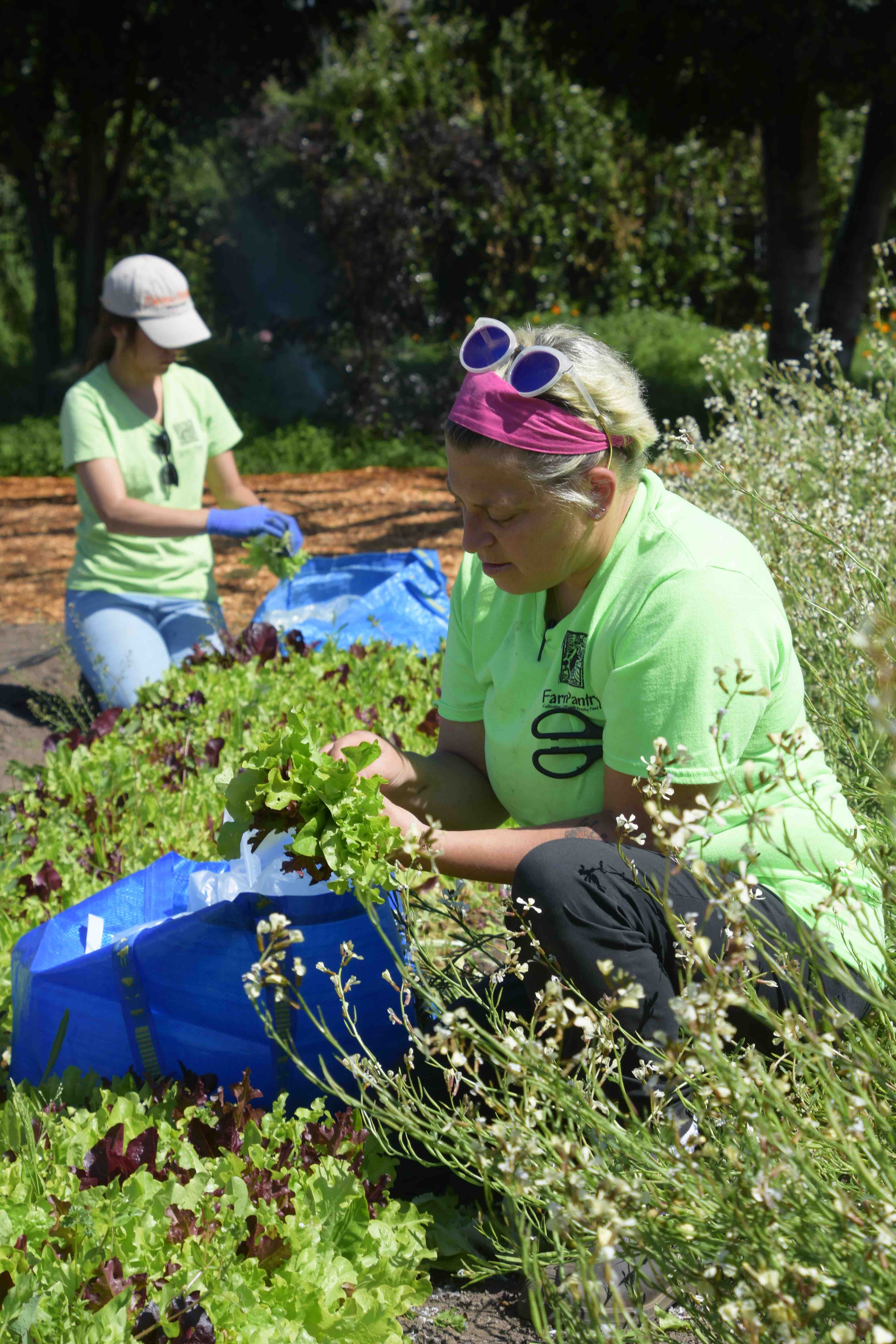 Duskie Estes announces to the volunteers who’ve spent the past couple of hours harvesting with her. I’m standing among half a dozen women, some of them wearing bright yellow T-shirts that bear the name Farm to Pantry—a nonprofit started in 2008 to meet the needs of food insecure folks by gleaning produce that would otherwise go to waste. Duskie, the new executive director, punches out a couple more numbers on her phone and explains that each pound yields four servings, “…which makes 948 servings.” She’s masked, but I can see her eyes crinkle into a smile.

There’s plenty of devastating math to contend with these days, including that nearly one-third of Sonoma County residents experience food insecurity (according to the latest Sonoma County Hunger Index Report) and the oft-reported fact that some 40 percent of this country’s food goes to waste.

So, the opportunity to spend the morning with Duskie and a handful of volunteers harvesting boxes of produce—4 pounds of kale, 8 pounds of eggplant, 36 pounds in just one of several boxes of apples—feels especially hopeful.

Our endeavor began around 9 a.m. here at Home Ranch in Healdsburg, the farm run by Doug Lipton and his wife Cindy Daniel (and presided over by a sweet old canine named Finn). Over the satisfying plucks of ripe plums from a sprawling tree, Duskie (“named by hippie parents”) tells me about her conundrum over how to be of service when the coronavirus throttled our lives.

“As chefs, we always turn to cooking to help during a crisis,” she says. “But I don’t feel safe in the kitchen right now. They’re crowded, it’s hard to distance, and I’ve got an 82-year-old mom I deliver groceries to every week.” So she started volunteering with Farm to Pantry, and when the ED position opened up, she applied. 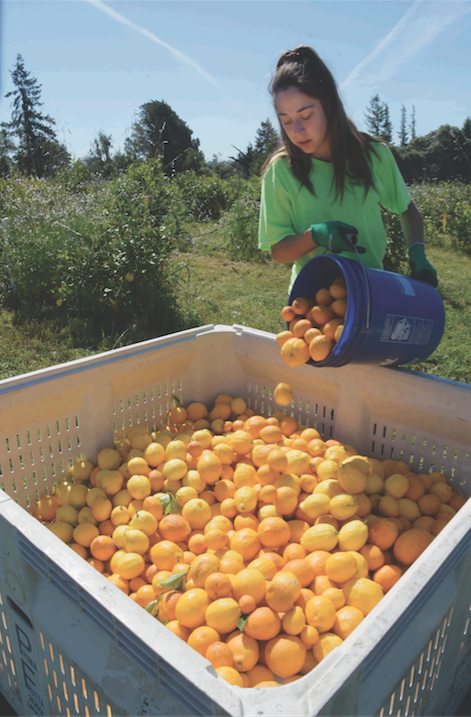 The timing was right. Duskie lost her award-winning restaurant of almost two decades, Zazu, to flooding in Sebastopol’s Barlow last spring. Then the Black Piglet food truck that she runs with chef-husband John Stewart saw all of its upcoming events evaporate thanks to the pandemic. (Side note: The truck still serves food on weekends at Davis Family Vineyards, where Duskie hopes to give you “the best BLT you’ve ever eaten.”)

But despite the too-numerous-to-name awards, acclaim, television appearances (she twice competed on Next Iron Chef), Duskie’s career was seeded in food justice. She remembers “sitting on the steps under the 50+ person gospel choir belting out We Shall Overcome at the age of five” at GLIDE Memorial in San Francisco, where she volunteered all four years of high school.

Six years later she codirected the Hot Meals Program at GLIDE, feeding 3,000 people a day, and then went on to develop the direct service program called Cooking Matters for the nonprofit Share Our Strength, in which chefs taught six-week classes on how to cook and shop nutritiously and deliciously on a food stamp budget. For half a decade, she organized their Taste of the Nation events in Seattle and Redmond to raise money for hunger prevention and relief grants, and just last year she participated in Chefs Cycle, a 300-mile bike ride with 275 chefs to raise money for No Kid Hungry.

“One silver lining of this pandemic,” says Doug Lipton, former owner of SHED in Healdsburg and one of 11 board members, “is that there are great people available who otherwise wouldn’t be.” Like Duskie, he lost his restaurant to natural disaster (the Tubbs Fire of 2017 torched what would have been SHED’s first profitable quarter; it shuttered in late 2018) and then the pandemic squelched their plans to open a similar restaurant/market in downtown Denver.

Now his 15-acre farm—with its heirloom orchards of peaches, plums, and pink pearl apples, French olive trees, flowers, herbs, and produce—grows specifically for Farm to Pantry, where Duskie gleans every Wednesday. “So many are hurting right now,” says Lipton. “It’s the least we can do.”

We’ve moved from the close maze of orchards into the bright open of grapes, vegetables, dahlias, and wheat. As we’re picking kale, a couple of first-time volunteers (and friends of Duskie) arrive, prompting a brief lesson on harvesting squash. Duskie explains, “Summer squash stays put and winter squash trails out. And those male flowers,” she points, “are the kind I stuffed with goat cheese and deep fried at Zazu.”

Nearby, in her mask and a fleece, senior at Sonoma Academy Sara Boyers quietly removes shishito peppers from a bushy plant. “I’m really interested in sustainability,” she tells me. “And since so many things got canceled this summer, this is a great opportunity to get outside and do something good for the environment.” Also in attendance is Pam Vana-Paxhia, who’s let Farm to Pantry glean from her citrus trees for a decade and just started volunteering this spring.

The glean ends at the outdoor weighing and boxing station, where other employees and volunteers trickle in with the fruits, veggies, and eggs they’ve gleaned from various other farms and personal homesteads—Jackson Family, Parsons Homegrown Tomatoes, WHOA Farm, DMS Ranch, to name a few. I chat briefly with program director Gwen Garloff, who came to this job after years of working as a financial counselor with lower income folks. “I like that I can now be on the ground making a difference,” she says while sorting pears into various delivery boxes.

When someone presents a huge box of basil, Duskie reaches for her phone to contact a chef at Sonoma Family Meal. They’re strategic about where the produce goes: “Like we’re not going to send a bunch of organic dandelion to seniors,” says board member and volunteer Viveka Rydell-Anderson. “We’re going to give them things that are accessible and easy to prepare, and let the professional chefs work their magic with the dandelion.” 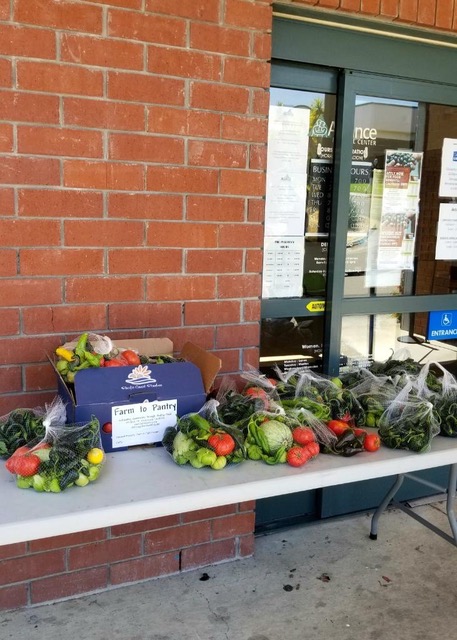 We’ve come to the final step of the process: delivery. Duskie hands out papers with addresses, contact info, and delivery instructions for 24 different places all over the county, from Forestville to Cloverdale—including seven Burbank housing facilities, various food pantries and churches, and Boys and Girls Clubs—and we all start loading boxes into our cars.

“Food is expensive in this area,” says Jacob Rich, resident service coordinator for Burbank Housing, which provides affordable housing for some 10,000 low-income residents. “And now people need more help than ever.” Over the phone he tells me that about 150 families receive weekly produce from Farm to Pantry, many of whom are employed in essential fields like healthcare, hospitality, childcare, and farm work or agriculture.

Before we all depart on our deliveries, Duskie, who’s warm and unpretentious, recounts a recent delivery of ready-to-eat golden peaches at the tent village at the Finley Community Center. It was a scorching hot day. She lingered outside, wondering if one box was enough. “I can practically hear the juice dripping down their chins,” she tells me, “and then I hear someone say, ‘Lady, this is the best peach I’ve ever tasted!’” Luckily, she had a second box to leave with them.

“Farm to Pantry is about food justice,” she emphasizes. “The food is out there, we just have to connect Sonoma County’s abundance with its need. This beautiful produce that only folks like us got to eat before—now everyone gets to eat it.”