Go With Your Gut: Inside Wildbrine’s Fermentation

People love their fermented probiotic foods. Yogurt, kefir, kombucha, kimchi, sauerkraut: these items have become increasingly popular for the health-inclined in the last decade, and as an accompaniment to many German meals long before that.

Yet the origins of fermented foods like sauerkraut can be traced back to China (cabbage soaked in rice wine) roughly 2,000 years before the Germans caught on in the 16th century. Kimchi, a spicy style of kraut that often incorporates vegetables in addition to cabbage, is believed to have originated in Korea around the same time as a way for families to preserve vegetables for the cold winter months. Longer still is the history of fermentation, which some estimate began as far back as 7,000 BCE. 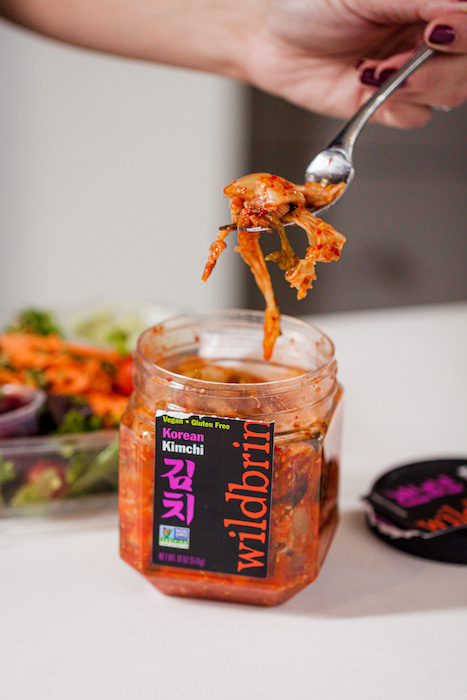 Jump to the year 2020 and we see shelves stocked with fermented or brined products—much of it from locals Rick Goldberg and Chris Glab of Santa Rosa-based Wildbrine. Glab and Goldberg first met at a New Year’s Eve party in San Francisco in the mid-80s. The two quickly discovered a shared interest in running marathons and triathlons, and a mutual love of food. Once out on a run together, the topic shifted to the lack of good Jewish delis and bagel shops in the city. The two then began scheming, with hopes of opening their own shop.

“We cooked together, we got together early every morning and we pulled together plans and worked on recipes. We scouted out equipment, we scouted out sites,” says Glab. They soon found a 500-square-foot space in San Francisco’s Western Addition.

“We hired the janitor’s sister, and together, we started making bagel with cream cheese sandwiches and selling them to vending trucks for 75 cents each,” adds Goldberg.

The small business became a big hit, winning a contest in the city for best amateur bagel. As their venture grew, they began delivering to vending customers, food service clients, and a few retail accounts like Safeway, who sold their cream cheese in their deli. Eventually, someone approached Goldberg and asked if they could make smoked salmon cheese spread for an up-and-coming retailer chain. They jumped at the opportunity. After developing the new product, the company’s packaging arrived for Goldberg and Glab to pack up the cheese.

“We open up this box with the labels that we’re supposed to put on the salmon spread, and we’d never heard of them before,” says Goldberg. “It was Trader Joe’s. That was our start.”

A couple of decades and eight cheese spreads later, the pair sold the $30 million company in 2006 and took a five-year hiatus to venture into different lines of work. Goldberg became a trainer chef at Ceres Project—a local nonprofit that supplies healthy meal delivery for mostly low-income people dealing with life-threatening illnesses—where he was also a board member. Glab returned to school and studied sustainable agriculture.

While at Ceres, Goldberg and his team made sauerkraut for their clients. “Because we all know now all the nutritional and health benefits that you get from fermented foods,” says Goldberg. 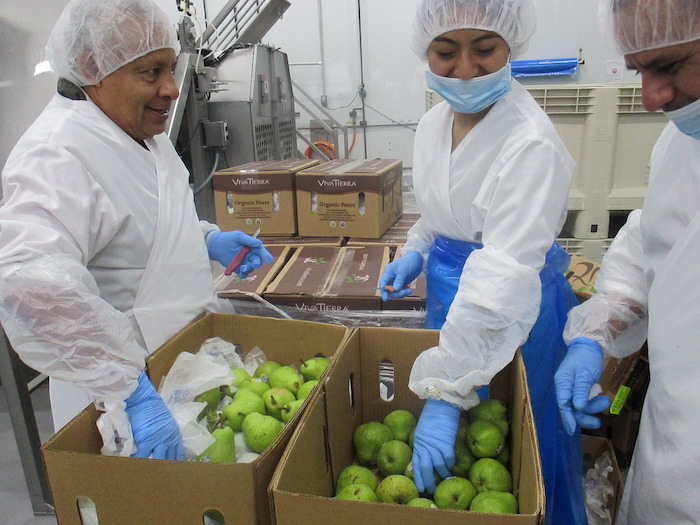 In addition to being nutritious and high in Vitamins A, C, and K, sauerkraut—a brined or fermented finely chopped cabbage—is beneficial to the digestive system. Because much of our immune system is centered in the gut, it makes sense that much of our physical well-being may be centered there, too. Consuming probiotic-rich foods like kraut and kimchi supports the stomach’s lining and creates a healthy barrier that might block out unwanted toxins from being absorbed into the digestive tract. This may also lend itself to lower levels of inflammation, and the enzymes tend to help with digestion as well.

Although popular with their client base, Goldberg says that attempts at packaging and selling the sauerkraut under the Ceres brand at local supermarkets didn’t lure as many customers as he’d hoped. So he switched gears, reached out to Glab, and in 2011 decided to make the kraut independent of Ceres, under a new business: Wildbrine. Much like their cheese business, Wildbrine took off. “We seemed to hit the probiotic/fermented trend just when it was really starting to kick in, so we’re very fortunate,” says Glab.

Today, the company, based out of a 55,000-square-foot building in Santa Rosa, sells eight types of probiotic-rich sauerkraut (flavors range from classic dill and garlic to arame ginger, jalapeno lime, and and my personal favorite, curry cauliflower), three types of kimchi, two salsas, and two fermented kinds of sriracha. Wildbrine products can be found across the U.S. and Canada, and as far away as Japan.

Goldberg says that Wilbrine processed over seven million tons of cabbage in 2019 alone—no surprise given that the global fermented food and ingredient market is anticipated to reach $689.34 billion in sales by 2023. 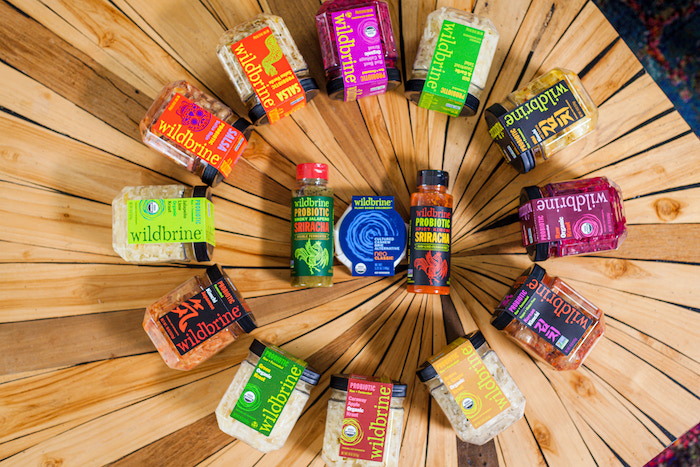 Starting this year, Wildbrine is embarking on a new line of vegan dairy products, starting with their Neo Classic Brie Alternative, a cashew-based “cheese” which can be found locally at Oliver’s, Molsberry Market and Community Market. “We started playing around with products and really came up with some fantastic formulas that we thought just blew away the stuff that was out on the market,” says Glab. “Some of those products are just good enough. Well, good enough isn’t good enough from our standpoint.”

Production on WildCREAMERY’s Brie Alternative began in February, and they had recently hired 20 new staff members. They planned to launch the rest of their new product line—which includes cultured and plant-based butter alternatives, cream cheese alternatives, and dips in flavors like ranch and chipotle lime—in March. 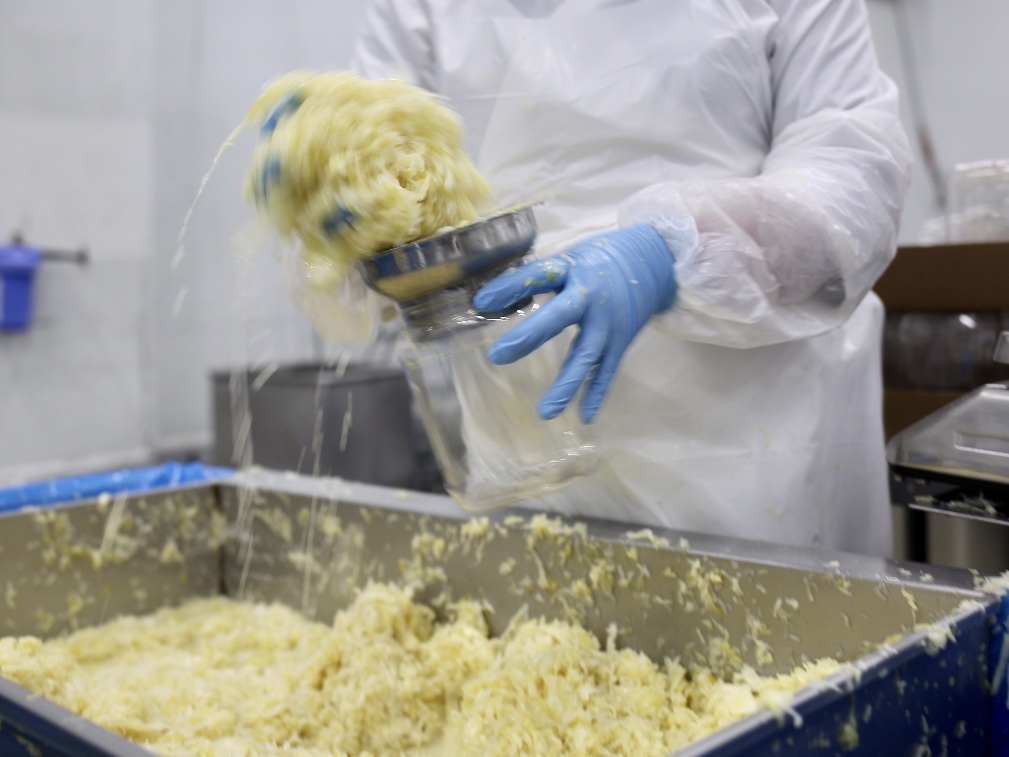 “And then the coronavirus hits, and everybody’s trying to scramble to figure out what they can do. We’re hearing from some customers that they’re not even going to look at new products this year,” says Glab. “We’re having to figure out how to juggle this all.” So Wildbrine’s priorities shifted from the creamery line to providing job security for their employees. For starters, they divided their core of roughly 100 employees into two groups. Each group of 50 people now works separate 12-hour shifts three days per week instead of being grouped all together for five shorter shifts per week. “Then if ever we had to shut production for a period of time, only one group would be impacted to manage that risk,” says Glab.

Because the future is uncertain, Goldberg and Glab are waiting to see how things evolve before launching back into their WildCREAMERY line. In the meantime, their kraut and kimchi are in demand, as consumers utilize its immune-building properties in this time of coronavirus.

“We’re fortunate that with people staying at home and cooking at home more, grocery sales in general are very strong right now,” says Glab. “You can’t just look at negative impacts because everybody’s got negative impacts. We’re lucky enough to be an essential business, still allowed to operate.”