Criminally Good: Sinning in the Kitchen with Dawn Zaft

On a Saturday evening in January, Dawn Zaft is at the Hopmonk, feeling a bit nervous.

The place is packed for a sold-out show of The Sam Chase, and Zaft is joining opening band Alison Harris onstage soon. “I’m only singing one song,” she tells me, “and it usually takes me a song to warm up.” A few minutes later I watch Zaft command the stage, and by the time her velvety voice crescendos into Nina Simone’s final chorus line—“I want some sugar in my boooooooowl”—the crowd is completely swept up.
What makes this even more remarkable is the fact that Zaft has only been onstage a few times in the past five years. Though she’s a classically trained singer who once had opera aspirations, Zaft has been raising her Criminal Baking business—which recently opened a second location in Sebastopol—and her son Gideon for the better part of the last decade. But, her singing has been back-burnered for too long: “I want to own it now,” Zaft tells me on a breezy January afternoon. “I don’t have to be perfect to do this.” 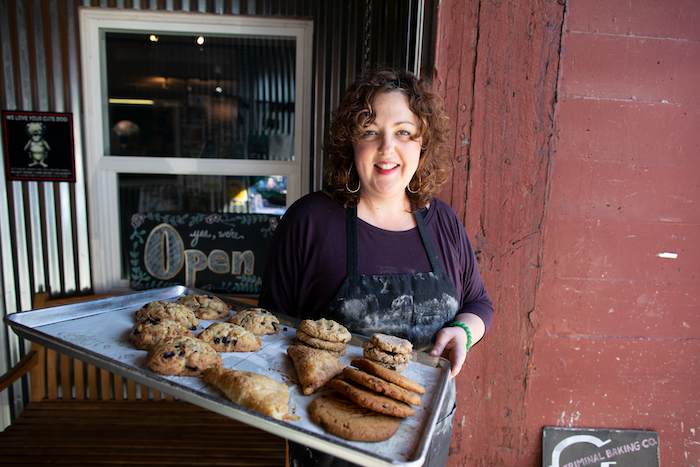 This leap-of-faith optimism perfectly embodies Zaft’s approach to running a business, and to life. In 2012, she decanted from acupuncture school just months before graduating and decided to do some soul searching—or more specifically, “bubble-map making”—to figure out what she really wanted to do. “I was literally connecting the dots between what I enjoy doing and what I’m good at,” she tells me. She’d been baking since 15 and had worked for years in the kitchen of North Light bookstore, where, she explains, “I learned to connect my heart with food.” She knew she liked conjuring taste combos in her head (pears and bacon?).

This was before the California Homemade Food Act of 2013 passed, when small-scale entrepreneurs were
still subjected to the same laws as commercial restaurants, making it illegal to sell “low-risk” foods from home kitchens. And so Zaft, working out of her kitchen, named her new business “Criminal” because technically it was. “I was scared,” Zaft admits, “and humor is how I deal with anxiety.” She was piecing a living together—filling a bakery case in a local café here, doing some social media and personal assistance there, “networking like crazy”—and knew that she didn’t want a regular 9 to 5 again. 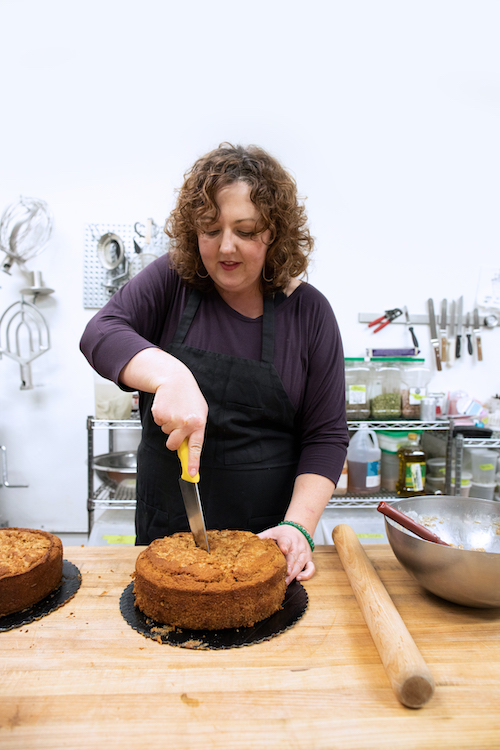 “I’m a project-oriented person,” Zaft says, “driven by the need to create.” When her friend and fellow business owner James Podchernikoff of the former Atlas Coffee put her in contact with a landlord on Sebastopol Avenue in Santa Rosa who gave her a good deal on rent, she decided it was “time to sink or float.” With a $5,500 loan and newfound freedom from a failing relationship, Zaft started baking out of the new kitchen, turning her inspired flavor combos into eventual café favorites (the pears were swapped for apples, cheddar joined the party, and the bacon apple cheddar scone was, hallelujah, born).

Location and timing were on her side: Winterblast, the popular November street festival/arts event/SOFA parade in the South of A district where her café was based, created the perfect party for her storefront’s opening in late 2012. “I didn’t know shit,” Zaft recalls. “But I did my best. I kept showing up.” Sometimes that meant working late into the night, crying tears of exhaustion over her batter. But Zaft recalls the mishaps of the early days—double-salting pots, hastily transporting (and sometimes wrecking) food—with an air of amusement and acceptance. “The joke was that someone would ask how much spice or salt went into something, and I’d say, ‘a good amount.’”

“We’d try something and if it tasted good, it would go out on the counter,” Zaft recalls. Then weeks later a customer would come in asking about that amazing muffin they’d had, and Zaft would realize she wasn’t even sure how she’d made it. When the café was just three years old, Zaft gave birth to her son, Gideon. “My C-section had metaphorically cut my core,” she confides about her postpartum suffering. “I hadn’t really stepped into being a business owner yet; I wanted to be a colleague, not a boss.” So she learned some painful lessons, but the customers kept on coming, and eventually Zaft outgrew the adorable light-filled café—“a great place to incubate the business”—that could only seat 12.

In January of 2019 Zaft opened in the hip warehouse space on Donahue in the West End, sort of “Punky Brewster meets Martha Stewart. We thrive in the hole in the wall.” She’s currently hanging art by Serena Hazard and Nell Hergenrather, creator of the delightful lady-bird paintings. We’re at a partially outside table in January, but still it feels cozy, like lounging at a friend’s house. 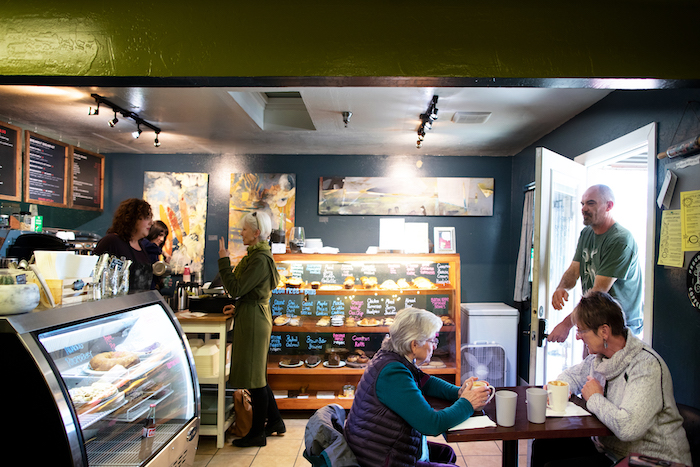 I’ve found that it’s best to go to Criminal nice and hungry; her food feeds you deeply. My thick slice of white cheddar and Brussels sprout frittata is creamy and flavorful. Breakfast sandwiches come smeared with pesto and lemon curd, and nothing beats the combination of quinoa, spinach, bacon, artichoke hearts, and goat cheese that is the Warrior Bowl. Good luck choosing between the buttery hand-pies, scones, muffins, knish, bourekas, cookies, and brown butter brownies (many of them gluten-free).

As we take turns chewing and chatting, Zaft is forthcoming about her struggles (with shyness, anxiety, depression) and calls herself a “floater” whose goals would shift with the seasons. She recalls leaving Yuba City in 1997: “I packed up my car, drove to my mom’s office, and told her I was going to Sonoma County. She asked when I was coming back and I said, ‘Oh, I’m not.’”

“I’m not going to be the consistent maintainer of anything around here,” Zaft says, laughing. “I do the wingnut stuff like cakes. They’re always different.” It’s true that chatting with Zaft is a wonderfully meandering and dynamic experience, like exploring new roads with an old friend. She can talk about “getting dumb-girled” and Foucault, holistic healing and the great Joe Imwalle, co-parenting and dating apps. 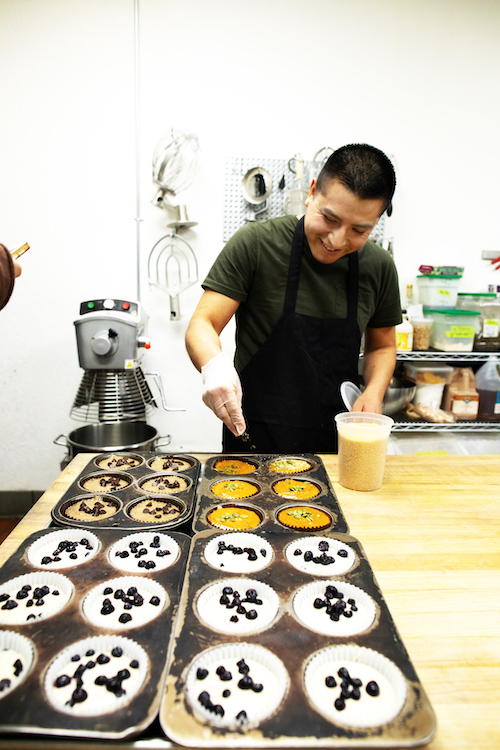 Turns out, one of Zaft’s strengths is creating systems and cultivating a workforce (she has about eight employees) who know how to organize her. About six years ago, Zaft left the kitchen in the hands of Rene Hernandez and his wife Clara who, she says, are like family. If Rene says something needs to change, she believes him. “My main job is to hold space for my customers and my employees, my community,” says Zaft. It doesn’t take long to see that she’s a patient, kind boss who wants to collaborate, not dominate.

Part of her “relationship-built economy” is sourcing from local vendors like Petaluma Creamery, Black Oak Coffee, and Keith Giusto Bakery Supply; even her linens are laundered by Sunset Linen, which has been around since 1962. But isn’t that kind of longevity rare? “A business is a fragile thing,” Zaft reflects, explaining that she’s still crawling out of the hole that four days of lost business cost her during the Kincade Fire last fall. 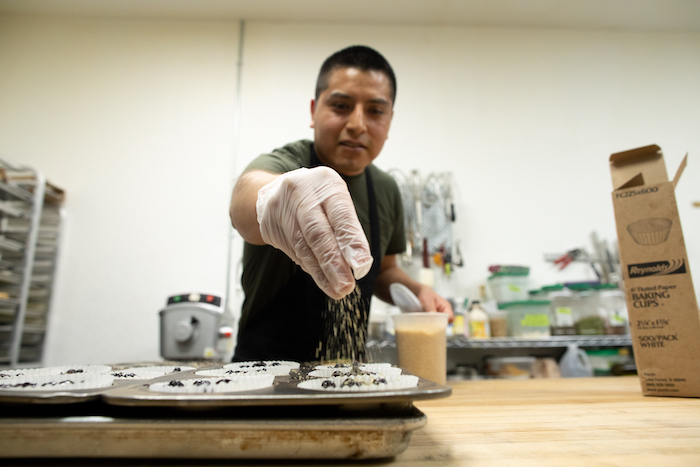 “If I was in this only to make money I would be miserable,” Zaft states plainly. She works six days a week, three of which start with a 4:30 am “bake off,” but reserves Saturdays for Gideon—either adventuring or vegging together. “I’ve developed some of my best friendships, and I’ve learned so much about cooking and running a business,” says Zaft, breaking into a smile.  “And I love my customers. There are so many other ways of getting paid.”