What was once primarily a small, tight-knit community of mostly farmers and hippies nestled in a quaint downtown, Sebastopol has exploded into a scene of trendy bars and restaurants, rising rents and vineyards replacing the idyllic apple orchards of days gone by. 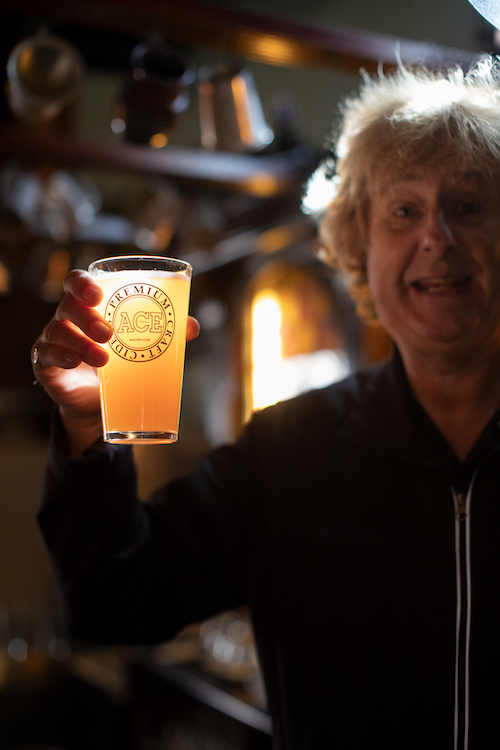 Jeffrey House, founder of ACE Cider, the longest-running cidery in the region, has witnessed the change firsthand. He remembers the rolling hills and open space of three decades ago. “When I found out that there were apples growing in Sebastopol, I drove up from Marin and couldn’t believe all the happy cows and green pastures,” says House, sipping a small glass of Windfall Cider. “It looked like England with sunshine.”

Before his visit, House, a UK transplant with a background in ad sales, had been working in San Francisco, selling Armagnac brandy and cognac out of an old Austin America. He laughs as he describes the green smoke streaming out the back of the car as he trudged the steep grades of San Francisco. House was 28 at the time and had only been in the States for about a year. He eventually started selling Fuller’s London Pride beer to local British pubs.

“But every time I went to an Irish pub and said, ‘Do you want to try my London Pride?’, they’d go, ‘F your London Pride,’” says House. “Then one of them turned around and said, ‘Where is your f’ing cider?’”

House then began selling Bulmers and Blackthorn, popular English ciders, to Irish pubs around the city until eventually stocks for the ciders skyrocketed and the companies moved to a bigger sales team. “It was like losing babies. I thought, that’s not going to happen again.”

So in 1993, House landed in West Sonoma County and opened ACE Cider at its then-location in Graton, where it flourished for 10 years before moving to Sebastopol. During those first years, he says they sold ACE Apple from a white van that’s still parked behind the office. Everywhere that Blackthorn Cider was sold, House tried to replace it with ACE Apple. But back at the taproom in Graton, it took some time before locals got hooked. 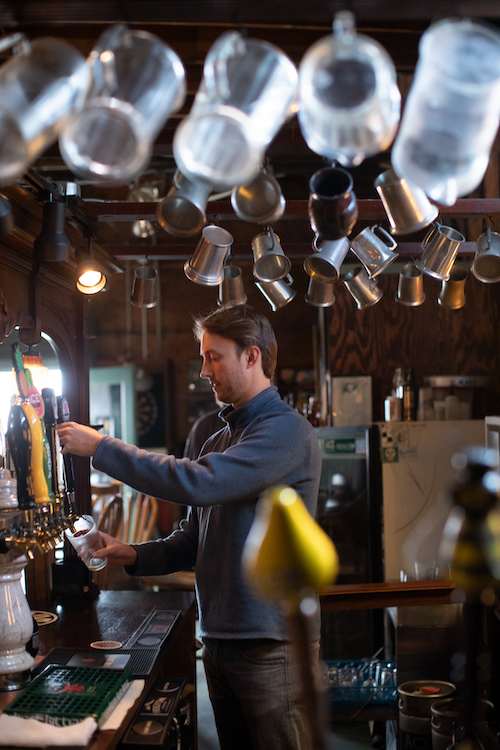 “The first few years, people didn’t know cider. We started with just four handles. Five years later, we couldn’t get rid of people,” he says. “Then it got packed because we had music every single day of the week, and then oysters, and fish and chips, and pretty girls.” After 10 years, House says ACE was asked to move out because of noise complaints and the cidery relocated north onto Gravenstein Highway in Sebastopol. Today, the taproom is only open on Fridays and maintains the casual old-school Sebastopol vibe, with live piano music, outdoor seating, and patrons in tie-dye stopping by for pints.

“At 69 years of age, I’ve got to be honest with you, I’m not up for 16-hour days anymore,” explains House, who’s happy to open just one day a week. These days his attention is focused on producing and bottling products in the adjacent apple plant, which has grown steadily. Now the longest-lasting, independent, family-owned cidery in California, ACE produces roughly two million gallons a year, which make their way to 48 states and far-off destinations like Panama, Guatemala, Japan, United Arab Emirates, Thailand, Singapore, and Norway.

House follows a long line of English cider makers, a tradition that can be traced back to 12th century British monasteries, some of which sold cider to the public. It is rumored that hard cider first arrived in the United States on the Mayflower. The alcohol content of the fermented apple juice acted as a preservative and was much preferred to water, which often carried parasites and germs because of unsanitary bottling.

Today, there are roughly 18 cider makers in Sonoma County and less than 1,000 nationwide, a slim number compared to over 6,000 breweries around the country. Yet despite the practice of many local cider makers growing their own apples, local apple orchards are slowly disappearing and being replaced with wine grapes. 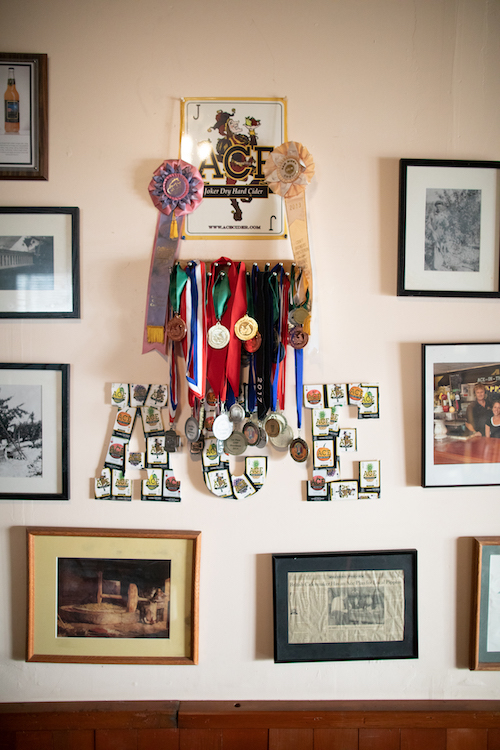 ACE first sourced all of their apple juice from The Barlow, back before it became the trendy hub for shops and bars that it is today. They focused on purchasing apples (mostly Gravensteins) from local growers, too, but with the transforming agricultural landscape of Sonoma County, House says they now have to look to other locales like Washington and Oregon to supply enough apples for their large production.

According to Alissa Trinei of Manzana Products Co., a Sonoma County-based apple cannery that has been producing apple juice, applesauce, and apple cider vinegar since the 1920s, local apple orchards are, indeed, steadily shrinking in size.

Since 1998, acres of Gravenstein apples specifically have dropped from 1,299 to 684, a nearly 50 percent decline in just two decades. Trinei points to the increase of wine grape growers as the culprit and admits that, like House, they still need to source out of Washington and Arizona to meet Manzana’s production demands.

“Even though Manzana pays a premium price to our local growers, it’s still not enough,” she says. “It’s not easy to be a farmer, and with increasing labor and material costs, it’s becoming more and more impossible to survive. And what will happen to our namesake fairs, schools, and county roads has yet to be seen.”

ACE also produces seasonal ciders like Honey Cider, made with Gipson’s Golden Sonoma wildflower honey. Because Gipson’s was impacted by the October 2017 fires, House says that ACE donates a portion of sales from Honey Cider to Project Apis, a foundation to support honeybee research and protection.

After the 2019 Kincade Fire, ACE created a new limited release, Windfall, in collaboration with Walker Family Farms of Sebastopol. ACE isn’t bottling Windfall, but folks can find it on tap in bars around the Bay Area. Proceeds from sales will go directly to United Way’s Kincade Fire Emergency Relief & Recovery Fund.

“We’re pleased to do that,” says House. “And I think it’s kind of a unique cider in that it’s more like a French or English traditional farmhouse style, whereas our others, like the Joker, tend to be more of a champagne.”

House acknowledges the changing market for alcoholic beverages with the introduction of boozy seltzers, beer companies making cannabis drinks, and others whittling down to zero calories. “It’s not as simple as it once was,” House laments. “There’s more to choose from—more wine, more spirits, more beer. More competition.” But although they’re making some small changes—like releasing 12-ounce cans instead of just bottles—they plan to remain pretty consistent. “Northern California is our home, and though it would be cheaper to move somewhere else, we’re not going anywhere,” says House. “This was apple country before it was pinot country.”