Listening to the Spirit Coming Off of the Still 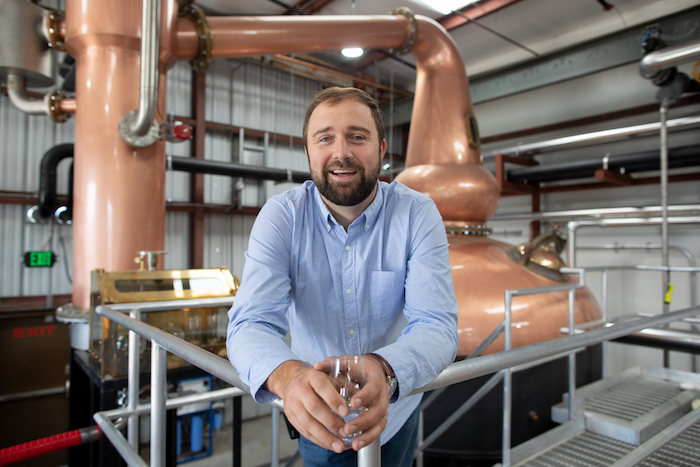 On a warm September morning in 2008, Adam Spiegel sat in his car in the parking lot of a financial sales firm where he, along with a third of the workforce, had just been laid off. He was 24 and thought he’d like to be his own boss. “I realized I had no tangible skills. I wasn’t a writer or a welder,” Spiegel recalls recently, “but I wanted to learn to do something with my hands.”

Fast forward 11 years and Spiegel is taking me on a tour of the 12,000-square-foot facility that houses Sonoma Distilling Company, the business that rose out of the ashes of that fateful day. “Many of us fallouts of the financial crisis realized that something was missing,” Spiegel tells me. “We used to spend a lot of money on stupid crap.” Turns out, not all of it was stupid—it cost him $10,000 to buy a 125-gallon still, handmade in Portugal, where Spiegel began to learn the art of whiskey making a decade ago.

Now it’s on display in the warehouse on State Farm Drive in Rohnert Park, the only North Bay city that was open to allowing Spiegel to distill over a live fire. Those were the early days, when together, with his business partner, he launched 1512 Spirits just three buildings up the block in a much smaller warehouse. “It took a 784-square-foot space to figure out who we wanted to be, and what kind of whiskeys we wanted to make,” says Spiegel.

Unbeknownst to him, they were getting into a business that, like craft beer before it, was about to boom. “We were the 15th distillery in California,” Spiegel tells me. “Now there are 110.” Nationally, the numbers shoot from 200 to 2,000 in the same time frame. Fueled by the possibilities, Spiegel parted ways with his partner in 2013 and upgraded to a 6,000-square-foot warehouse further up the block. 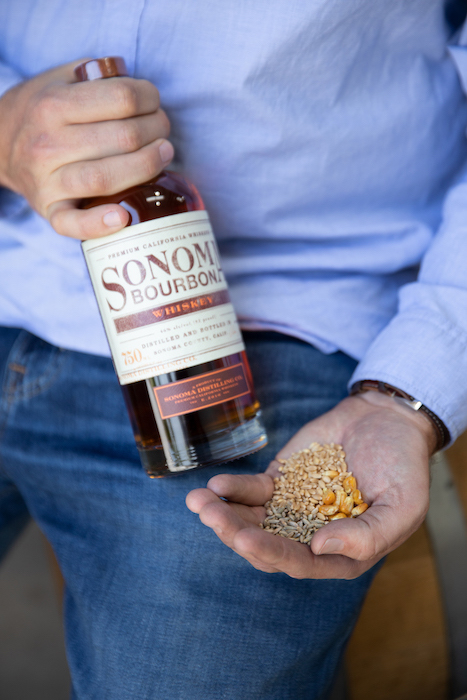 All Whiskey Starts as Beer

As we move through his third and final facility, a year-and-a-half in the making, criss-crossed with chrome pipes and catwalks, Spiegel gives me a lesson: “All whiskey starts as beer. There’s grain, water, and yeast.”
He points to a map of California and explains that 80 percent of their grains—rye, wheat, and corn—come from Dixon, California. The water comes from Cobb Mountain Spring in the Mayacamas mountain range.

This slow-hand “grain to glass” ethos infuses everything from the distillery’s 100 percent dependence on wind energy, to the use of Bloody Butcher (a type of red corn) and other heritage grains. Not only does Spiegel “get to put money into farmers’ hands,” he also donates the leftover grains to a local farmer who uses them as compost and feed for his pigs and sheep. Now, we’re looking at the mash vessels—giant steel cauldrons where Spiegel adds malt, and the fermentation of starch into sugar begins. I climb the stairs to peer into one and watch the brown liquid bubble and steam as the yeast eats the sugar and converts it into alcohol—or, as Spiegel puts it: “farts out carbon dioxide and poops out alcohol.”

“That sour smell is the good bacteria that are living in our space,” says Spiegel, who ferments 30,000 gallons every four to five days. “Even that small factor affects the flavor of our product, gives it that one percent nuance.” Once this “beer” is made, it gets pumped into the still where the heat evaporates the alcohol and then recirculates the vapors back into liquid. Each distillation—Spiegel has moved from fire to steam due to the larger scale—reconcentrates the alcohol.

As we move into the distillery room, I’m struck by the massive bulbous pots reminiscent of Eastern European churches. Spiegel tells me that the Moors actually invented the pot still for water purification, which the Europeans then adopted for alcohol, and the Scots specifically for whiskey, or Scotch. His 3,000-gallon Scottish still looks like something out of a Dr. Seuss book. 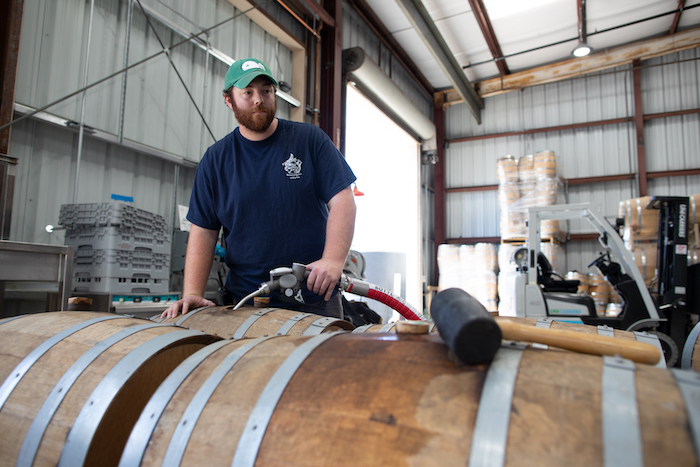 The next stage is barreling, where the spirit derives its flavor and color. According to professional sniffer Nancy Fraley (who’s been dubbed “The Nose” for her exceptional olfactory abilities), making whiskey is like raising children. In an article for The Atlantic, she explained, “A spirit is conceived during fermentation, spends time in a copper womb, then is born as a distillate.” And then comes the difficult, delicate art of “nurturing the spirit to maturity in barrels.”

Whereas vodka can be made in a day, whiskey takes time—typically anywhere from three to 12 years. Spiegel points to a stack of barrels that have been aging since 2014. They’ll likely be ready next year. “When is a whiskey done without being over-oaked? That’s the question,” explains Spiegel, who is both a client and friend of Nancy Fraley. “Too many American whiskeys taste like driftwood.” As both distiller and blender, Spiegel evaluates 100 barrels a week, sometimes rebarreling in order to let the product soften and round. “Getting a blend together is like corralling a whole bunch of kindergartners,” he says with a chuckle. Even though all the barrels are made of oak, he explains, each barrel is its own little world—differences in temperature, elevation, and even the age of the original tree all provide subtle nuances that affect the final product.

As much as he is a natural teacher—I learn that the evaporation from the barrels is called “angel share” and that the smaller the barrel, the quicker the aging process—Spiegel is also an eager student. In addition to Fraley, he credits Master Distiller and Master Blender Hubert Germain-Robin, whose family has been making brandy since the 18th century in Cognac, France, with helping him learn the art of slow and mindful distillation. “Distillers must listen to a spirit coming off the still in order to understand how much time in the barrel it will take for flavors to blossom and come to full beauty,” writes Germain-Robin, whose high-quality brandy was served by both Presidents Reagan and Clinton in the White House. 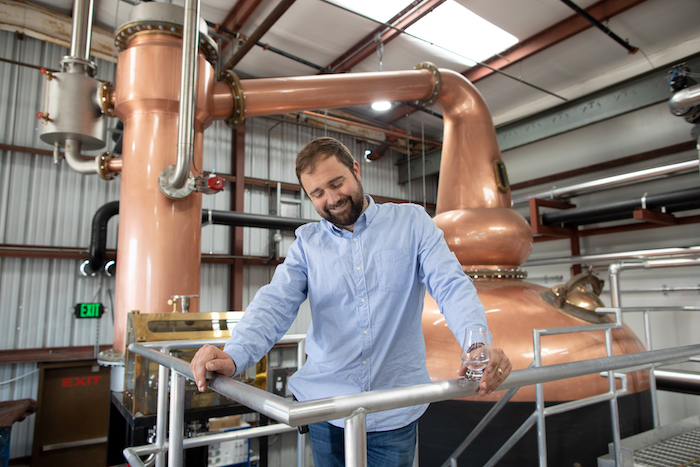 A Taste for Growth

Spiegel’s whiskeys can be found all over the county, from Bottle Barn and Oliver’s Market to Wilibees and the Stark’s restaurants, and at special food-pairing dinners. For those who want an education and inside peek, tours of Sonoma Distilling Company are offered Friday through Sunday. They’re accompanied by welcome cocktails, kombucha on tap, and a tasting of four spirits, served neat.

We wrap up our tour at the beautifully rustic tasting table. On the other side of the room, a few of Spiegel’s workers (nine in all) place creamy labels on golden bottles of cherrywood bourbon made with corn, rye, and smoked malted barley—the fall release. Fall kicks off the biggest sale months of the year, and, with his product in 15 countries and 8 states, Spiegel spends about a quarter of the year on the road. Home is San Rafael, where he lives with his wife Ashley, daughter Brooklyn, and newborn daughter Frankie, who was born shortly after our interview.

“It was really fun to be on a 12-foot ladder ratcheting down a gas pipe, hands black and sooty,” Spiegel recalls of those earlier days, when he fulfilled his goal of acquiring a tangible skill. Now he’s got a 9,000-square-foot barrel room nearly completed and a school bus converted into a spill tank underground. So when he tells me, “My goal is to be California’s whiskey,” I believe him. 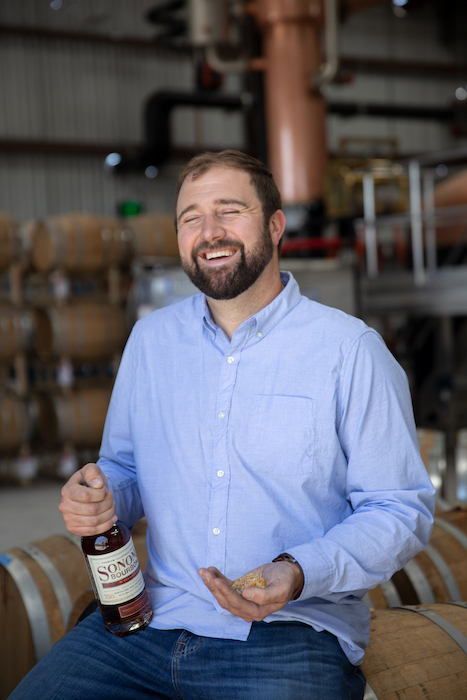 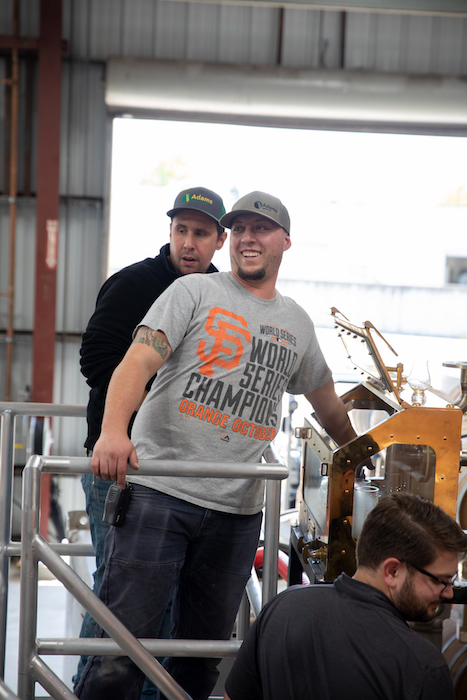