At Radical Family Farms, vegetables are more than food. They are a bridge to reclaiming lost history and culture. 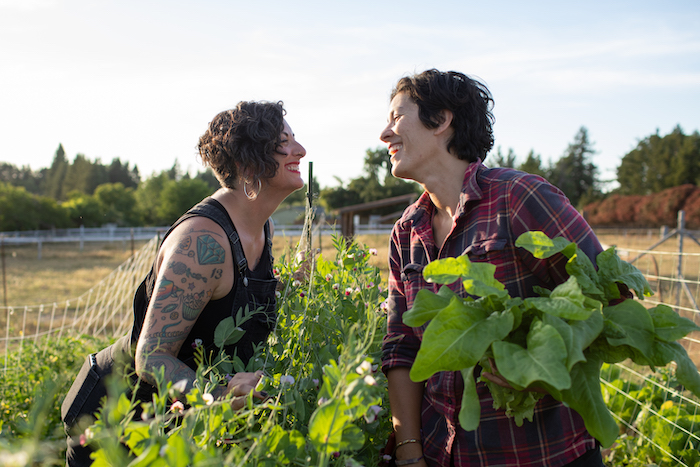 A favorite in Chinese cuisine, pea shoots happen to make an excellent cover crop for degraded soil. For that reason, Leslie Wiser, a child of immigrants from Germany and Taiwan, planted peas (along with clover, hairy vetch, rye grass, and barley) on soon-be-farmed land at her south Sebastopol property. In a happy surprise, the dou miao, as the peas are called in Mandarin, were a hot seller, becoming the first cash crop to sell out when Wiser and her partner Sarah Deragon launched Radical Family Farms earlier this year.

When the crop was ready to be harvested, they posted a photo on Instagram. The shoots sold out quickly. “It’s unbelievable how connected and effective Instagram has been for a start-up business,” says Wiser as we walk between rows of Asian vegetables planted over the last few weeks in an intensive, no-till style. 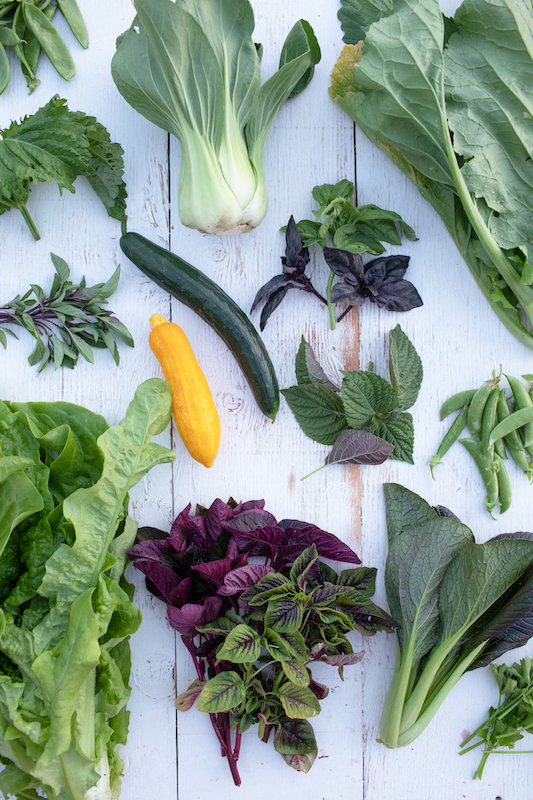 Wiser is also growing foods inspired by her German heritage: feldsalat, salsify, and, of course, yellow potatoes. Her grandmother struggled to find some of those items after immigrating from Germany to America after World War II. Her mother similarly struggled to find produce appropriate for the Chinese dishes she loved to make.

“My family had to make do when they wanted to make their comfort foods from their homelands,” says Wiser. “Not being able to find this ingredient or that vegetable in the Midwest, there were a lot of substitutions. And I say now, ‘Why should we have to make do and substitute?’”

As such, Radical Family Farms is part of a larger national movement that connects food and farming to identity, land sovereignty and stewardship, lost heritage, family history, and the passing on of cultural knowledge through foods.

Wiser’s farming techniques are inspired by the work of Jean-Martin Fortier, a Canadian farmer and expert on small-scale organic vegetable production. His best-selling book, The Market Gardener, guides her farming compass—minimum tillage, building organic matter into the soil, sequestering carbon, creating habitat through hedgerows, and intentional planting for beneficials and pollinators.

“If you farm properly, if you build rather than deplete your organic matter, if you create a nice balance in your farm’s ecosystem, you can farm quite a bit on one-and-a-half acres,” she says. “It would be enough to support us and provide food for the community, so that’s my end goal.”

At 42, Wiser says she’s committed to full-time farming later in life than she would have liked. An internship in her early 20s at a family farm in Alaska was transformative, but it took another two decades for her to actually plant roots on a piece of land: “I went down the path of getting my master’s degree and working in the corporate world, doing all the things you should do.” 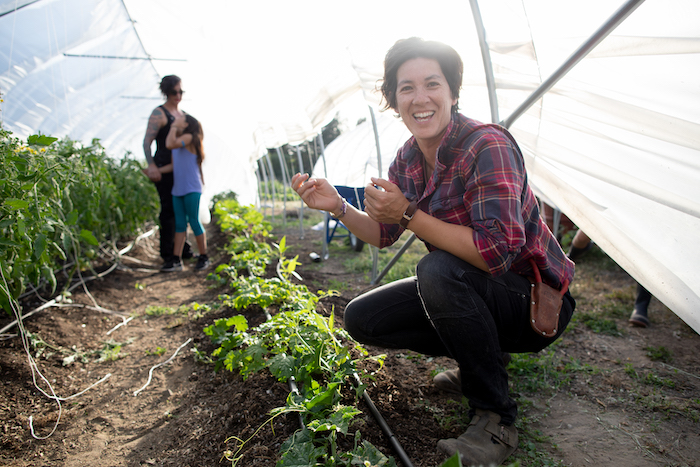 Deragon is new to farming herself. For the last decade, she’s built up Portraits to the People, her successful photography business. She’s applied those skills learned as a digital-savvy business owner to pump up the farm’s marketing. And she’s embraced a life of the soil—working alongside Wiser to install hoop houses and an irrigation system, trellis tomatoes, implement pest control, and all the other daily, grueling farm tasks. She does this all with a sharp sense of humor, wearing bright lipstick as a testament to her urban inclinations.

“I’m a total wussy city girl,” says Deragon, who moved from Denver, Colorado to the Bay Area in the early 2000s. “I’d never grown anything before! But I’m having the time of my life. It’s really hard sometimes, but I wouldn’t trade this for anything.” 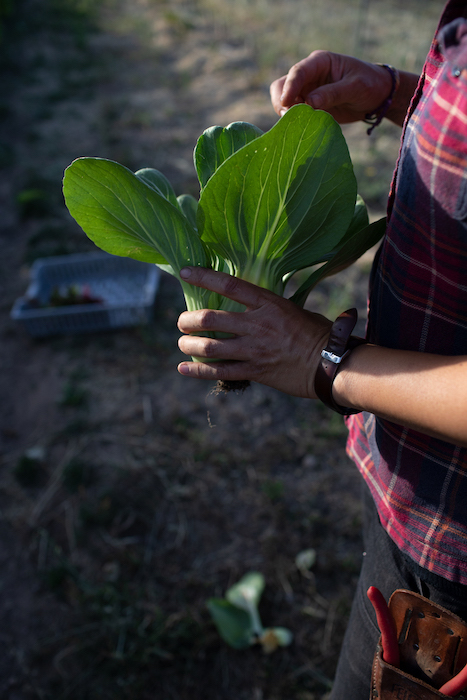 Radical Family Farms, as the name might attest, is an explicit tool for Wiser’s “identity farming.” She makes no bones about farming as a way to reconnect with her family’s history. During our interview, she talks at length about her family’s history of displacement.

Her mother was born in mainland China. Wiser’s grandparents, supporters of Chiang Kai-shek, the leader of the Chinese Nationalist Party and head of state in China until 1949, fled to Taiwan after Mao Zedong’s Communist Party took power. Over in Europe, her German grandfather married her Jewish grandmother just after World War II. With Germany in ruins, they immigrated to upstate New York to start a new life.

While her parents were native Chinese and German speakers, they didn’t hand those languages down to their children for various reasons having to do with assimilation. Wiser herself feels a sense of loss, as an adult, for the history and culture of her ancestors.

“I grew up in Minnesota, and there wasn’t a lot of diversity at the time,” she says. “I had a lot of shame and confusion over being Chinese. My siblings and I were assimilated to white America, and I didn’t fully identify with my Chinese side. It took me a long time to figure out, why I was different? I’m still working through that. The farm has become a tool and a process to reconnect with both my Chinese and German sides. It helps me feel close to my ancestors, who put their lives at stake and gave up their homelands to make a better life for themselves and their descendants.” 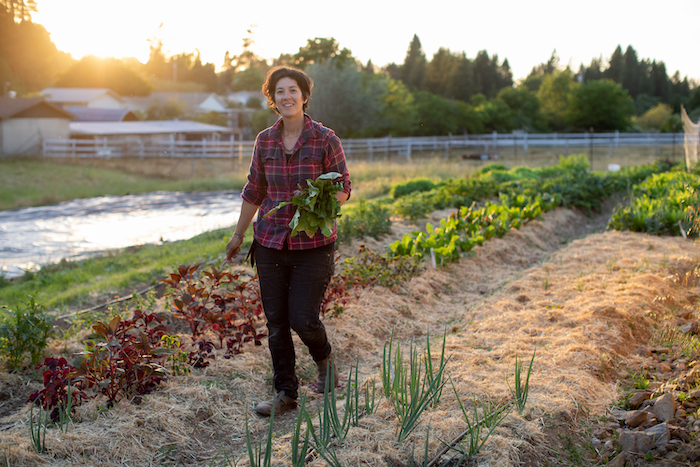 “I made up the term “identity farming,” but I’m still trying to figure out what that means,” she adds with a self-aware chuckle.

As a biracial farmer, Wiser has entered into the troubled, degraded fields of United States farm history—particularly with regards to Asian, Latinx, and Black farmers. California may be relatively progressive now, but not so long ago, legislators passed the California Alien Land Law of 1913, which prevented immigrants of Asian descent from buying farmland or even entering into long-term lease contracts. The law wasn’t reversed by the Supreme Court of California until 1952. And during World War II, a shameful number of Japanese-Americans were stripped of their property and interned in camps in the California desert—including a few Japanese families from Sonoma County.

Times have changed, and as demonstrated by the passing of the Farmer Equity Act in 2017, which makes access to state and federal resources more equitable for farmers of color, California is making attempts to remedy past discrimination.

Yet, the question remains: Is there a market for Asian vegetables in Sonoma County? Wiser worries that she’s being “narcissistic” by focusing on growing vegetables from her heritage. “My biggest fear is what if we can’t move this?” she muses about her products. Early success shows that this fear might be unfounded—a 15-slot CSA sold out within two days though quite a few of those slots went to folks in San Francisco. 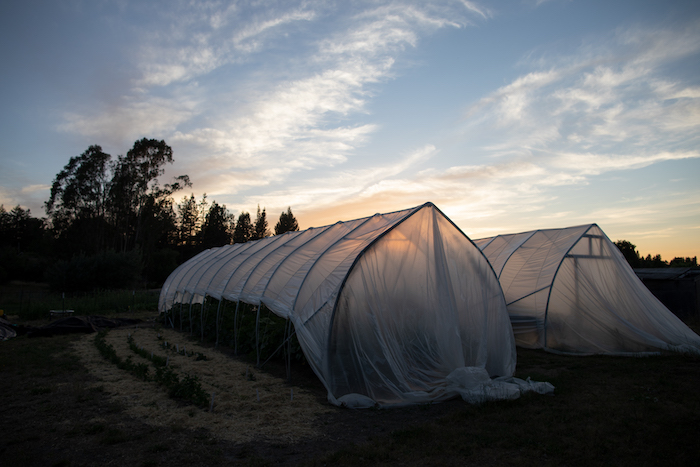 At this point, Deragon jumps in, after laying out the difficulties of farm work, the long days toiling in the soil to sell handfuls of pea shoots and bok choy for just a few dollars a handful. “If your heart was not in these beds, why would you do it?” she says, gesturing to the rows of leafy greens. Wiser nods her head, smiles, and agrees.

Radical Family Farms offers a CSA that is sold out but has a waitlist.