On the Move: Mike Hudson Distributing

Story by Jess D. Taylor // Filed under Folks You Should Know Jul/Aug 2019

For fifty years, Mike Hudson Distributing has been the hard-working middleman between local vendors and markets. And they just keep going. 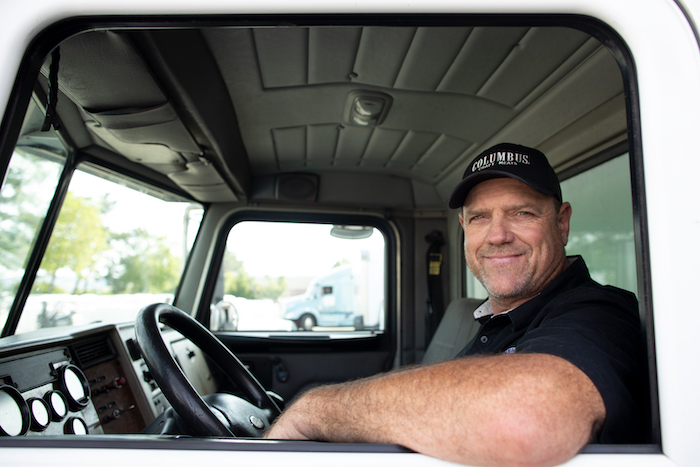 Today’s breakfast is a piece of toasted sprouted wheat from Alvarado St. Bakery in Petaluma, smeared thick with Clover Sonoma butter, both of which I bought at Oliver’s Market. Most of us who are fortunate enough to live in Sonoma County are familiar with these businesses, grateful for each locally produced and procured bite.

But what many of us don’t think about is how the bread and butter get to the market in the first place, the people responsible for the wedding of local vendors with local markets—the less sexy but crucial component in breakfast and beyond: the distributing company.

The story of Mike Hudson Distributing, a Petaluma-based distribution company, may be the story of a major middleman, but it actually starts with a woman named Barbara. When she was a teenager growing up in San Francisco, Barbara’s family owned a van that they used to deliver meats to local delis. When her Uncle Angelo (aka the “Salami Man”) retired in 1968, her future husband, a former Safeway produce manager named Mike Hudson, took over the company. Mike made weekly trips to the Columbus plant in the city to pick up meats to be  delivered around the North Bay. 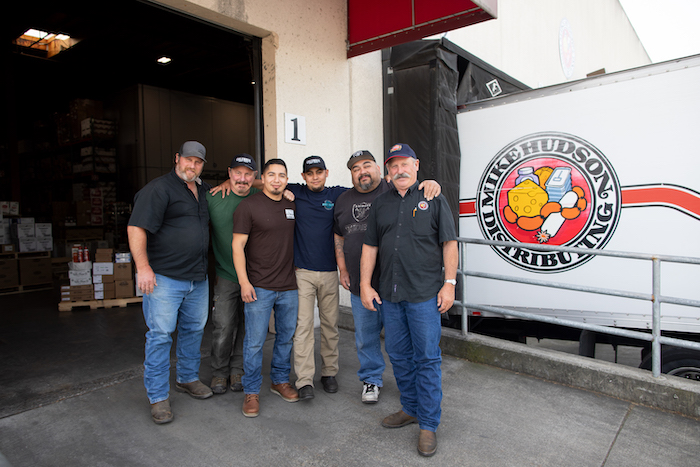 Longtime employee Frank Bianchi remembers those early days, when their first warehouse was an old converted chicken coop with a gravel floor on a ranch off Liberty Road. He was just 16 years old when Mike hired him to drop by after school and load the trucks with roast beef, turkey, ham, cheddar, pickles, and other condiments. “Nothing was pre-sold in those days,” Bianchi recalls, “so Mike would peddle directly off the trucks.”

The company boomed in the ‘70s and early ‘80s after landing Perry’s Delicatessen in Marin County in 1972, a customer they still work with today. Instead of Safeway or Whole Foods, they’ve made a niche out of selling to independently operated markets like Oliver’s, Big John’s in Healdsburg, Petaluma Market, and Bay Area institution Mollie Stone’s. They’ve kept East Bay chain Zachary’s Chicago Pizza in mozzarella cheese since the 1990s. 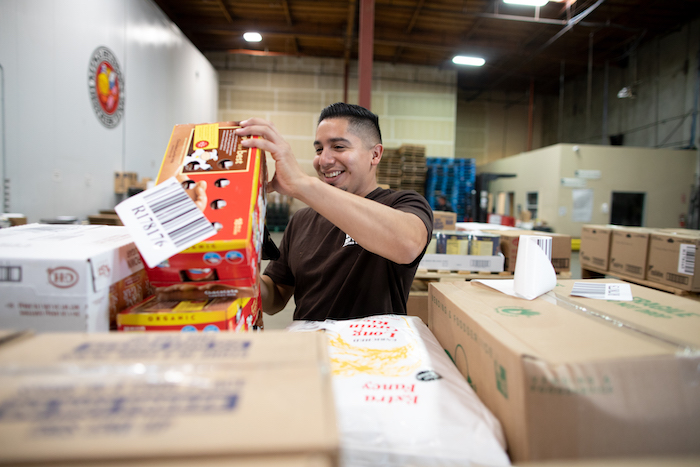 Forty-five years later, Bianchi has worked his way up to director of operations of the now 55,000-square-foot warehouse with state-of-the-art energy recycling and LED lighting. From the original 8’x12’ wooden walk-in cooler to two coolers that take up thousands of square feet, he’s seen massive changes.

“But our customer service has remained the same,” Bianchi tells me. “With giant distributors, you basically become a number. If a customer runs short of product, the big boys make you wait ‘til your next delivery day. But we’ll make a special delivery for you.”

“Mike Hudson Distributing has always treated us as an active member of their team and not just an account,” says James Schwedhelm, deli coordinator for Oliver’s Market. “Their commitment to Sonoma County falls in line with everything that we hold dear to us at Oliver’s, and that makes doing business with them a win-win for both parties.”

“Our customers are like family,” echoes current owner George Parisi, who brought his financial expertise to the company in 1990 after working for both the Ford Motor Company and Clover Sonoma. When Mike died a few years later, leaving no heirs to the company, George partnered with sales manager Frank Haynes and employee Jim Davis—the company’s second hire—to buy it out. Though Davis finally retired in 2012, he’s still on payroll for making visits to beloved customers like Cache Creek Casino. 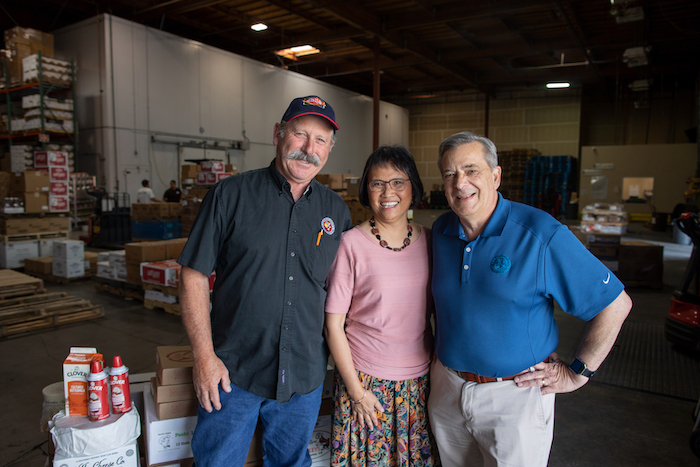 George’s wife Lufu, who has 35 years of experience in the wine industry, joined the team in 2014. She manages their inventory, a significant task given that they manage over 5,000 products, most of them perishable.

“At the moment, we are using 40 pounds of donated Asiago to finish a batch of vegetable lasagna for 300 people,” Nolan tells me. “Our community in need appreciates the variety and local flavors we incorporate into our meals.”

George and Lufu, who became sole owners of the company on the last day of 2016, take good care of their 72 employees. They’ve been paying well over minimum wage for years, and George cooks an annual steak dinner for the night crew. “Everybody here is like family,” says Bianchi. “George and Lufu have an open door policy; we know we can go to them anytime.”

Still, they struggle to find quality workers in this increasingly digital age—which makes their average worker tenure, about 12 years, that much more remarkable. Tim Peterson has tripled the average, moving from stocking to driver to sales rep over the course of a 36-year career.

“Every week, I look forward to Tuesday,” he tells me, which is the day he covers the Fort Bragg and Mendocino Coast route. “Sometimes I even glimpse a whale out in the water.” 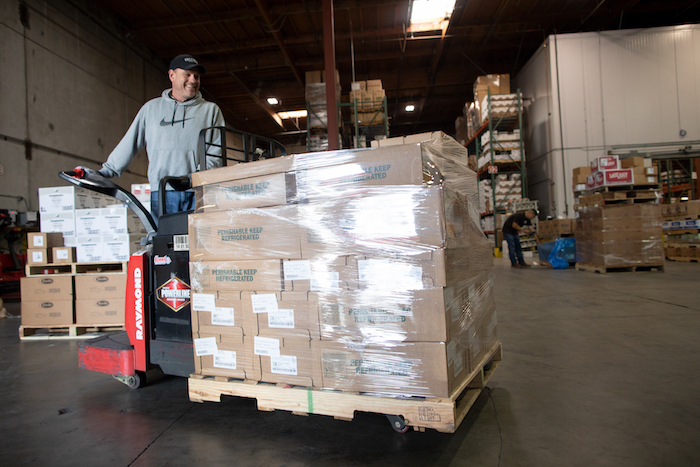 Indeed, with their fleet of 19 trucks, Mike Hudson has opened markets for Sonoma County vendors, making deliveries as far north as Crescent City and far south as San Jose. This is how they came to represent Alvarado Street Bakery, which needed someone to deliver north of Willits after an order was placed by Fort Bragg Unified School District 13 years ago, explains sales manager Scott Shriver. The two companies also happen to be neighbors. “So all it takes is an electric pallet jack to move our bread over to their warehouse,” he says.

Flexibility is key in a business that grows and shrinks according to the business’s needs. They gained 490 new products last year, but they discontinued about 495. This kind of stasis is an apt analogy for the company’s ethos—they evolve when they need to while holding tight to the homegrown model that’s come to be their hallmark. Their marketing duo Diane Moore and Michelle Eighmey have customer service reps filling the bright office, taking orders by phone.

But when the owners start talking about the food shows they host, I can feel the nostalgic appreciation for good business the way it’s always been done.

“We ask our vendors, ‘How can we help support your story?’” Lufu explains. These vendors include Peggy Smith, cofounder of Cowgirl Creamery, who has been working with Mike Hudson for over a decade.

“We have great respect for them and how they do business,” she tells me over the phone. “They’ve always been truthful and have really helped us grow.”

Though she travels a lot these days, Barbara is clearly still a foundational presence in the company, attending annual Christmas parties and offering input. In fact, George mentions that they were considering updating their logo—which looks a little like an award ribbon from the county fair emblazoned with an illustration of six different fresh foods—in honor of their 50th anniversary this year, but ultimately decided against it, partially on Barbara’s advice.

“It’s recognizable,” he says. “It’s us—even though canned ham no longer exists.” And wow, he’s right. Both my husband and best friend knew it instantly, that round reddish logo we’ve all seen on trucks around Sonoma County. Canned ham—is that what that tin is supposed to be? Apparently.

More recognizable are the link of sausage, hunk of cheese, and loaf of bread: the products that got them started and that continue to sustain them.

“But what about the bottle?” my friend asks me. “Pickles?”

George isn’t sure, but he thinks it might be milk. He chuckles, “Barbara and I still debate that sometimes.”