The Livestock is Back: Farmster Revives Ag in Cotati

The news about the birth of the baby goats spread fast through the neighborhood. 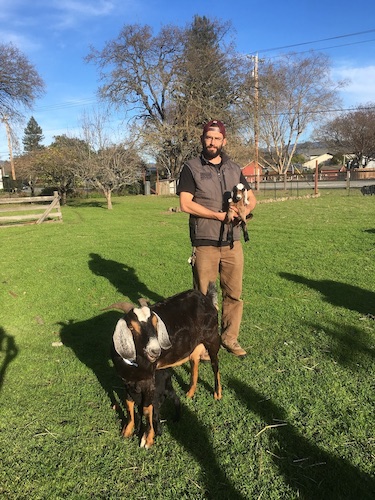 Volunteers at Farmster, a new agricultural start-up on the historic, four-acre Veronda-Falletti Ranch in downtown Cotati, started hearing from the neighbors soon after the mama goat gave birth in a shelter right across the street from City Hall.

“The town was on fire,” says Nancy Prebelich, the nonprofit’s lead animal husbandry volunteer with a laugh. “[The neighbors] were texting us incessantly with the news.” It’s just one example of how the surrounding community has embraced the resumption of agricultural operations on the property, which is surrounded on all sides by apartments, houses, a church, and civic buildings. It’s just a block or so from the town’s main drag on Old Redwood Highway.

Farmster officially launched in 2015, when a group of Sonoma State University alumni hatched a plan for a start-up that would sustainably farm on land owned by SOMO Village in Rohnert Park. They dreamed of starting a community farm that included livestock and educational programming. According to the nonprofit’s website, Farmster “aims to educate communities about real-world solutions such as reduced food waste, plant-rich diets, and silviopasture management,” an approach to agricultural that sees livestock as integral to carbon sequestration and healthy soils.

As it goes with start-ups, the project faced its share of hiccups, including the challenge of farming in Tiger Salamander territory. Three years later they were looking for a new location. The group of five or six slowly dwindled, as to be expected as the recent college graduates found full-time employment elsewhere. 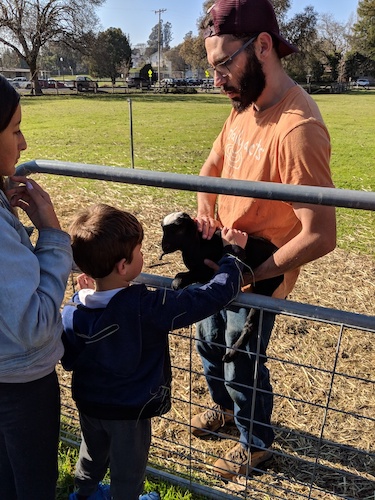 By the time Dustin DiMatteo, the last Farmster standing, signed a three-year license agreement with the City of Cotai to farm and run youth programming on the site of the former ranch, he was the sole volunteer with the nonprofit.

Two other volunteers have since come on board. Megan Berlin is a master gardener who lives in a condo nearby and was searching for opportunities to work the land. She’s now lead garden volunteer and plans on spearheading the planting of a garden in raised beds, to protect from roaming wild turkeys. Nancy Prebilich, who also also farms in Sebastopol, came on as the lead animal husbandry volunteer. It was her goats that caused the ruckus in the neighborhood on birthing day.

“I couldn’t get animals out here fast enough,” she says, about the City of Cotati’s enthusiasm for getting livestock on the property.

Formerly a working farm owned by the Veronda family, the 4.37 acre property was purchased in 2008 by the City of Cotati. A partnership with the Sonoma County Agriculture and Open Space District means the land is permanently protected from urban development.

“The Cotati Historical Society was very instrumental in getting this site preserved forever,” says DeMatteo during a tour of the property.

The post-WWI history of the land is agriculturally rich. The Veronda family once raised nearly 3,000 chickens on the land. In 1948, Jennie Veronda married Al Falletti, who eventually became the mayor of Cotati. The couple built the Spanish colonial-style home that is now a separate parcel on the north end. They planted fruit trees and flower gardens and raised sheep for meat and wool. Now, animals have returned to the land with sheep, goats, chickens, and Kune Kune pigs.

Preblich says it’s been nice to see the land opened up to people who want to learn about agricultural life, but might not have the land to start something up themselves. “[It’s been rewarding] having people engaged and giving them an opportunity to access the agrarian culture,” says Preblich, who comes from five generations of West County ranchers. “It’s increasingly difficult to do it on your own since you need access to acreage. You can read all the Farming for Dummies, but it really comes down to walking the field.” 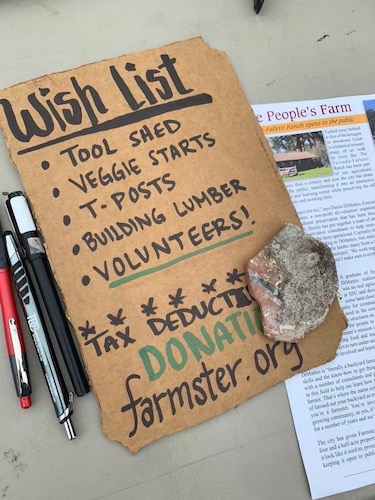 Lindsey Goodwin lives on a street adjacent to the Farmster site. She likes to visit with her family on the Open Farm Fridays. “[Farmster] has increased our sense of community,” says Goodwin, as the bleating of baby goats travels across the pasture. “The paths they installed have made a difference in accessibility, and I am seeing way more people out and about than I saw five years ago.”

Future plans include a rehab of the rundown house and the water tower by the City of Cotati. Farmster will rehab the existing outbuildings. Since Farmster’s current coffer sits at about $16,000, fundraising is a current priority. Eventually, says DeMatteo, they will have land stewards living in the house, while the offices of Farmster will take residence on the second floor of the water tower. A Junior Farmster camp through Cotati Parks and Rec is happening this summer, giving neighborhood children an opportunity to learn about animal husbandry and gardening.

“We are here to show that this is a marriage that will work and that we are keeping an open door,” says DeMatteo. “This isn’t a private operation.”

Farmster is located at 175 West Sierra Avenue, Cotati. The public is invited for farm tours and volunteer opportunities on Open Farm Fridays, every third Friday from 3pm to 5pm.

Into the Labyrinth: Bees N Blooms