Into the Labyrinth: Bees N Blooms 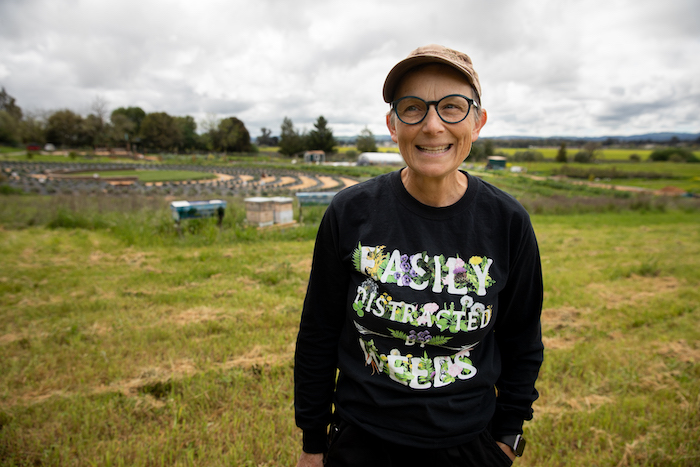 “Every almond needs a bee,” says Susan Kegley, who runs Bees N Blooms farm on Petaluma Hill Road at the foot of Taylor Mountain. It’s the first Friday of spring, a wet gray day. After loaning me a raincoat, Kegley’s giving me a tour of the 11 acres that she and her husband Geoff have transformed into a cut flower farm anchored by a meticulously constructed lavender labyrinth.

We’re discussing commercial beekeepers, who trek their hives from places like South Dakota to the Central Valley in February to pollinate the almonds. According to The New York Times, 71 out of the 100 crops that provide 90 percent of food globally rely on bees for pollination. Duty done, the bees head home and make honey all summer. Come winter, they often subsist on a diet of sugar water, starved of the detoxifying and immune-boosting polyphenols found in nectar. 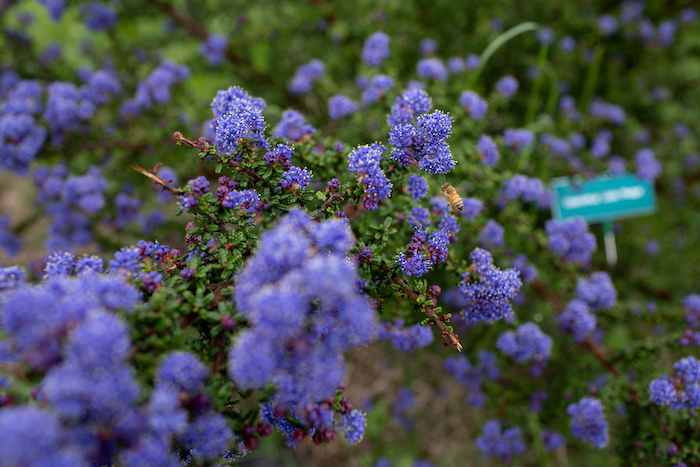 Kegley’s bees, on the other hand, are fed on the more than 50 kinds of flowering plants that she grows organically on the farm. Already well-established are red flowering gum trees, vitex, bottlebrush, and crape myrtles, which bloom in August and September after other food sources have gone to seed. Still in adorable seedling stage are the echinops that will grow into fuzzy blue globes—popular in cut arrangements but also a favorite of the bees.

“We kind of struggle with whether to leave the flowers for the bees or cut them,” she chuckles, clipping a couple of peachy Blushing Beauty tulips for me. Luckily, between the springtime landscape and hedgerow plants like ceanothus, honey locust, and salvia, to the abundance of summer blooms—lavender, snapdragons, bee balm, zinnias, goldenrod, scabiosa—to the fall chrysanthemums and sunflowers, there are plenty to go around. 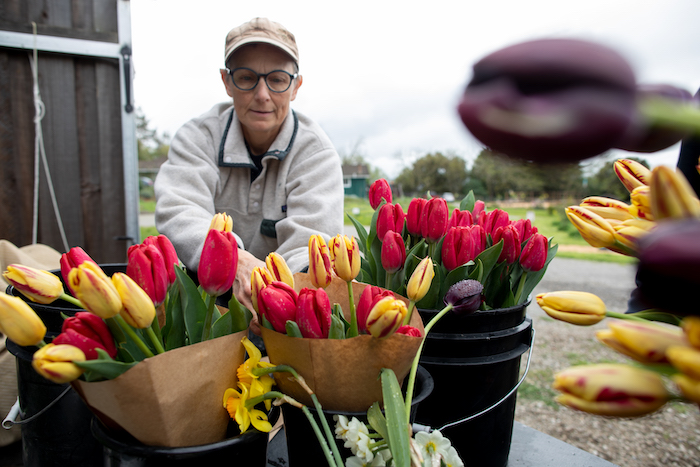 As an environmental chemist, Kegley runs the Pesticide Research Institute, which has studied 60 commercial hives in the Central Valley, testing for pesticides and pathogens. “You can’t conduct valid experiments without really knowing your subject,” she explains.

So she’s immersed herself in apiculture for the past eight years and now maintains anywhere from six to 12 colonies at a time, including one colony in a dead tree that was rescued from a Rohnert Park backyard and relocated to the edge of her property.

“You get to the point where you think you know something and then the bees reveal you don’t really know what’s going on,” she says. “I’m still learning.”

But her humility belies her extensive knowledge: Kegley’s study reveals that the most significant factor negatively impacting colony strength is fungicides, which compromise the bees’ immune systems, causing queens to fail and larvae to languish. Varroa mites are another contributor to colony failures, which is why she selects survivor local queens, supplemented with Russian queens bred specifically for mite resistance. 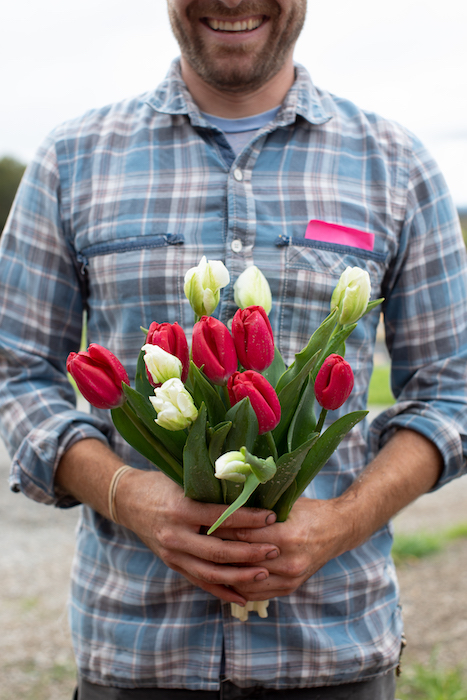 “Farming is in my blood,” explains Kegley, who grew up in Virginia where her grandfather farmed soybeans and peanuts. When the Kegleys relocated to Sonoma County from Berkeley a few years ago, they went from farming a north-facing third of an acre to 11 westward-sloping, depleted acres fully exposed to the elements—the perfect opportunity to practice regenerative agriculture on a larger scale.

Kegley plucks a Daikon radish stalk to show me the long tubular growth that helps to break up their clay soil (a particular challenge for the lavender, which prefers soil that’s well drained).

“And here’s the nitrogen,” she grins, pointing to the white tentacles rooting from the base of a fava bean stalk. Other nitrogen fixers planted on the farm include peas, vetch, and crimson clover.

Indeed, nearly every choice is intentional, like the hedgerows of bushy black sage that are planted behind the more delicate allium stalks to protect them from harsh coastal winds. Bonus: The bees love the sage flowers and the seeds are popular with the birds, “so everyone gets fed.”

“Let’s talk about drainage,” Kegley says cheerily, remembering their first (and record-breaking for rain) winter in 2016. She gestures towards the now-swollen swale, which gently absorbs the water runoff coming down from the seasonal creek, replenishes the aquifer, and provides vegetation and puddles for the ducks, what Kegley calls her “slug management team.” (Come nightfall it hosts a robust chorus of frogs.)

In turn, row covers protect the lettuce, kale, and collards from both the ducks and root maggots. As for those relentless spotted cucumber beetles? Kegley lures them into sticky traps with mating pheromones and applies beneficial nematodes to the soil to eat their larvae—or simply catches them in a huge net while they perch on the ends of tall grasses. 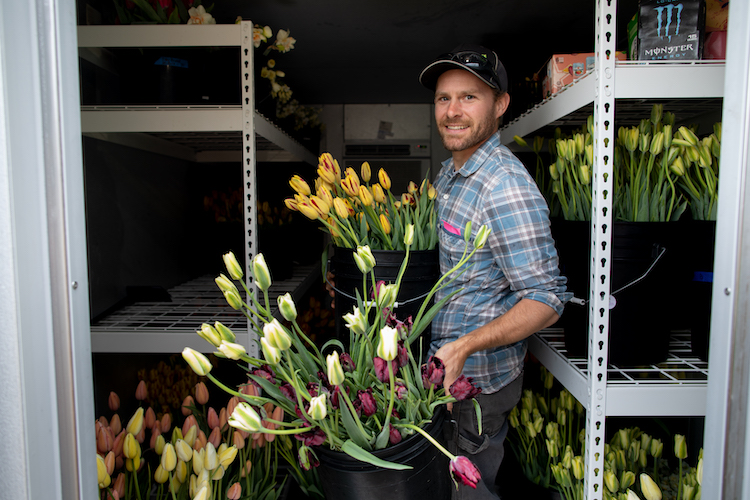 Even weeds have met their match at Bees N Blooms thanks to weed barrier cloth, which blocks out the light but lets in the air and water. When the cloth is pulled back, the result is “a layer of of fluffy dried vegetation on top, an amazing mix of all-natural, time-release nitrogen granules to fertilize the next crop.”

Kegley has energy and expertise to spare, but she is quick to acknowledge the many hands that help to cultivate the land. She credits farm manager Seth Gowans with “making it all happen” and enthusiastically endorses other local businesses—from handyman David Brewer to the Gopher Guy in Sebastopol to Garcia Landscaping. Recent hire Caitlyn Thomasson is “bringing positive energy and new ideas for helping visitors learn about regenerative agriculture and environmental stewardship.” 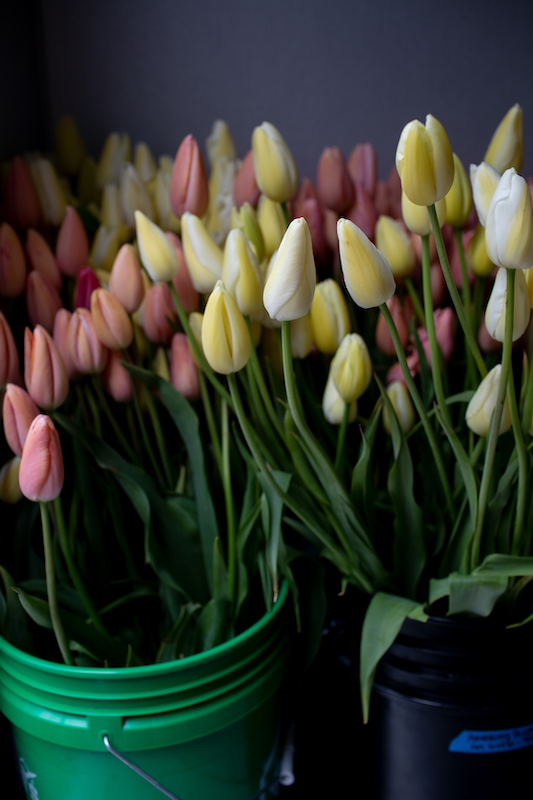 It was her husband Geoff (“the idea man”), a retired astronomer, who envisioned the labyrinth—the largest in all of California. The “medieval seven-circuit” labyrinth will hit peak bloom in mid-June and is planted with seven different varieties of lavender, including pink and white and the twice-blooming Munstead lavender. An aerial view reveals its near-perfect precision.

Unlike mazes, which are about finding your way out, labyrinths are for journeying intentionally on a single path. There’s no getting lost. “You can just walk,” says Kegley, “and you’ll end up in a good spot.” Some walk alone, others in pairs, some silent, others talking.

In this hyper-productive climate, where “we’re always being pulled in a thousand different directions,” as Kegley puts it, the labyrinth is the perfect opportunity to slow down and be present. Bee-themed benches made by local beekeeper and woodworker Thea Vierling encourage you to rest and take your time, and the grassy center is an ideal picnic spot.

Most people have likely noticed the cute forest green farm stand on the side of Petaluma Hill Road. There are many reasons to pull over: In addition to cut flowers and seasonal veggies, the beautifully curated space also sells local honey, beeswax candles, stuffed toy jack rabbits and bobcats, and various lavender products like hydrosols, oils, and even glass sushi dishes. Writings by Anne Lamott, Jack Kornfield, and Thich Nhat Hanh share shelf space with books on bees and gardening.

After hosting her 60th birthday party there, and the Sonoma County Beekeepers Association picnic for 200 people last summer, Kegley is excited about their latest venture, weddings. In addition to the photogenic labyrinth, the land has an event center with a full kitchen and a newly minted pavilion area that will seat 120 people for dinner. (And, did I mention all the flowers?)

On a lazy Sunday, I wandered the labyrinth and grounds with my husband and two young daughters, noticing how active the bees were compared to only nine days before. The sun shone bright and warm, and out of nowhere, a swarm converged and started moving towards us. We dashed west while they headed east, a humming bee tornado.

By the time we flagged Kegley down, she’d missed the whole thing, busy with another colony. She gestured towards a big hollow tree at the southeast corner of the farm, their likely destination, then headed back down the slope to investigate which hive they came from.

Bees N Blooms is open Thursday through Sunday until Labor Day. 11am to 4pm.