The word “Transhumance” refers to the migration of grazing animals, in accordance with the seasons, guided by the people who tend them. 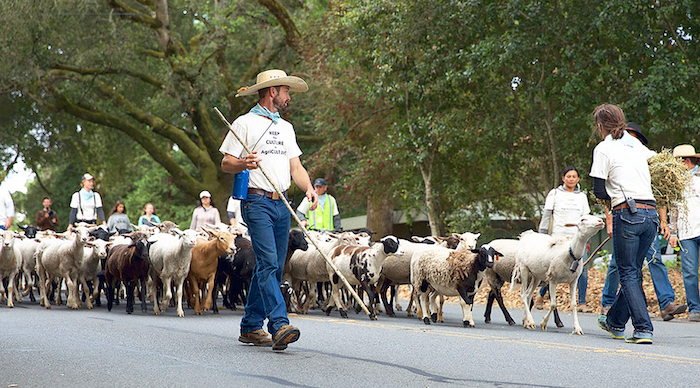 This generally means the movement of livestock between higher pastures in summer, and the lower valleys in the winter. It’s also something we don’t see often in Sonoma County even though cows, sheep, and goats graze the open space lands surrounding local cities—and sometimes within the boundaries of those more urban spaces.

The Transhumance Festival, now in its second year, was inspired by a very European concept of honoring the movement of shepherds and their flocks through villages. Centered at Petaluma’s Steamer Landing Park, the joint effort between the Grazing Collective and Friends of the Petaluma River is billed as a “celebration of grasslands culture, resiliency, and dedication to good food.”

Last year’s festival kicked off with an unfamiliar spectacle as local ranchers and shepherds guided dozens of ruminants through the streets of Petaluma in the early morning, in tribute to a centuries-long tradition of moving animals from place to place without skirting areas of concentrated human habitation.

“We had gone around to every home on the route to let people know we’d be coming through,” recalls Guido Frosini, a Grazing Collective member and owner of True Grass Farms in Valley Ford. “People were waiting on the sidewalk for us to pass, some with coffee and donuts. The kids were mesmerized—they couldn’t believe it was happening. People came out of their homes and started following us. By the time we got to the park 100 people were following us. It brought people together around food and a sense of place.”

Similar to last year’s festival, this year’s Transhumance Festival opens with an early morning drive of animals through the streets, followed by a locally sourced lunch (for an extra cost) curated by Chef Matt Roberts, and the opportunity to explore the marketplace and educational exhibits about food, land, and animals.

A full roster of panels, organized under the themes of land ethics and ranching in relationship, include speakers like Ruthie King from Mendocino County’s New Agrarian Collective, Sarah Keiser of the Penngrove Grazing Project, Pomo Elder Nick Tipon, and many others.

Keynote speaker Enrique Salmon, head of American Indian Studies at Cal State University East Bay, will continue the food system theme, speaking on how food choices shape cultural and physical landscapes. There will also be time for a sheep shearing demo and a grass identification workshop. The point, say organizers, is to bring a marginalized conversation about the role of animals in a grasslands ecosystem into the center of a city—Petaluma—that, along with rising property values and rents, has experienced the loss of agricultural heritage and culture.

The Transhumance Festival is on Saturday, May 11 at Steamer Landing Park – 6 Copeland Street, Petaluma.

Tickets are $25 for the event with an additional $20 for lunch. Children 12 and under free.

The Livestock is Back: Farmster Revives Ag in Cotati