Can Do! West + Wilder Canned Wines

Can you drink, can you enjoy, can you understand West + Wilder canned wines? 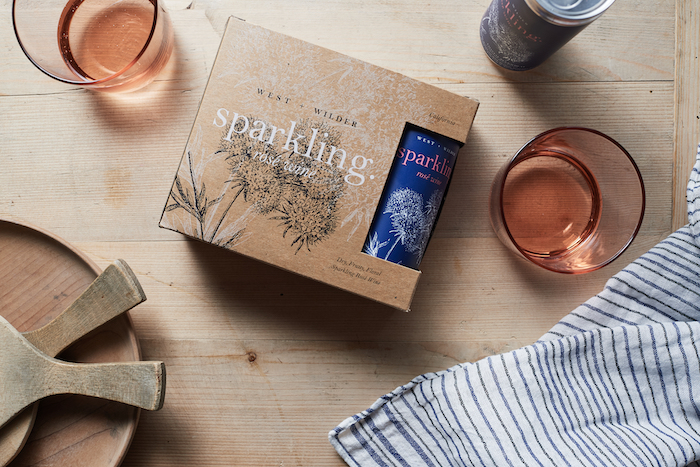 The French invented the screw-top wine closure, but the Australians took the heat for it, popularizing it at the turn of the 21st century and enduring the withering disdain of the fine wine world—until everyone got a chance to try it. “Look Ma, no cork” was strange at first but is now entirely normalized; eccentric Bonny Doon winemaker Randall Graham even held bicoastal funerals in 2002 celebrating the cork’s swift demise.

All of which is to say that wine people freaked flat out when screw tops debuted, predicted a dark future of ill-aged vintages, and generally looked to the Annie Green Springs-a-fication of a noble and ancient art in which vin ordinaire tasted of pink watermelon and bubble gum. And then they got over it.

Which brings us to how I came to be sitting in West + Wilder’s barely furnished upstairs office in downtown Santa Rosa pretty much freaking flat out about canned wine. 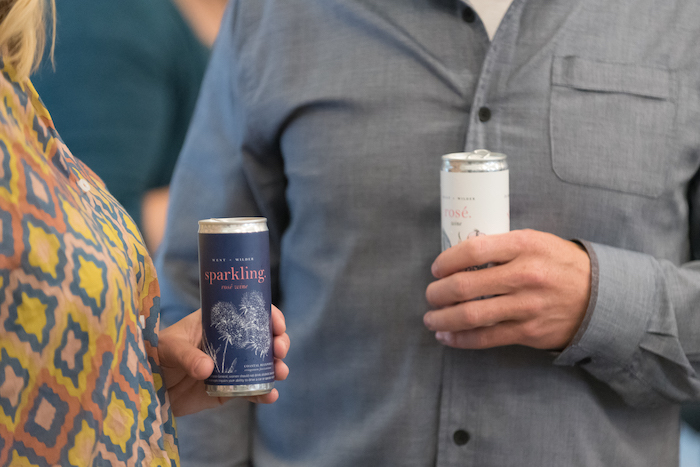 Kenny Rochford and Matthew Allan, the marketing dynamos behind the new West + Wilder brand, patiently tried to explain the idea to me. My brain refused to understand it. Wine in a can is a perfectly acceptable novelty when seated alongside Coppola’s Geyserville pool, having paid a ridiculous amount for the privilege of sipping sparkling Sofia Rosé through a straw—is what my brain said. My cerebrum further reasoned that this can of stuff is palatable mostly because of the revolving path made by a poolside server who is seemingly delighted to ferry big see-through cups of bottled wine to me at my briefest request—and certainly as soon as I finish this strange can of fizz. But that’s just my brain.

Rochford and Allan have bigger brains, having trained them doing marketing and research at such hallowed houses as Medlock Ames and Kosta Browne, two wineries renowned for the excellence of the stuff that they serve from bottles, the glass kind that most often come closed with corks. Rochford and Allan have a suggestion: Pour the wine out of the can and into a glass.

After I returned home, having spent an hour haranguing the men about their wine I couldn’t see, a canned beverage that I could only imagine trying to somehow not glug like a beer or a Coke while wishing for a little pink straw that sticks to the side like the whole thing is just a child’s juice box gone wrong, I opened it. And poured it out.

And that’s when I completely got over it.

West + Wilder specialize, Rochford and Allan had tried to tell me, in bright acidic wines that come straight from the can with a hand extended, so very glad to meet you. Whether it’s their white blend of Sauvignon blanc, Chenin Blanc, Viognier Muscat, and Chardonnay or their Pinot Gris, Pinot Noir, Malvasia rosé blend, I finally understood that West + Wilder wines are delicious: Immediately, wholly, entirely yummy.

Once you pour the stuff in a glass, even the dimmest brain might further grasp what Rochford and Allan had stated in English language words I’ve been trained since birth to comprehend: It’s about the portion size. 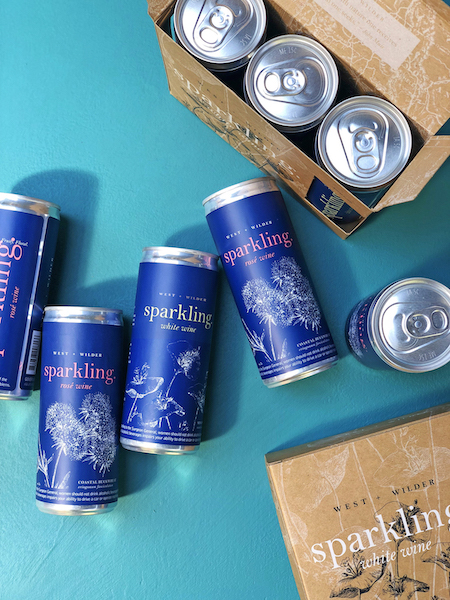 Rochford’s wife, a schoolteacher, is West + Wilder’s perfect customer. She would love a glass of wine on a Tuesday night but doesn’t want to be “that person” who opens an entire bottle and just might polish the thing off. One can of West + Wilder is 8.4 ounces, a third of a bottle, or what Allan calls “a good home pour,” the kind of full glass you’d be glad to treat yourself to after a hard day in the classroom, knowing you have to get up early and go back tomorrow. Three cans equal a 750 mL bottle of wine.

The white grapes are mostly sourced from Washington vineyards and all of it is canned—still a tough verb to type next to that noun wine—six times a year. Adorned with beautiful 19th century botanical prints, the aluminum outfitted with a nonreactive lining to preserve taste and the package sold in cunning little boxes of three, West + Wilder wines are entirely perfect for the current collective moment in which we drink less and—we definitely drink better. In fact, canned wine sales rose some 43 percent in 2017-18, according to Nielsen, and sales hit $45 million in 2018. Constellation, Gallo, Kendall-Jackson — all the big players are working the can.

“This is wine for every day,” Rochford told me. “It’s a great bottle of wine that happens to come in cans.”

I had nodded thickly, taken some samples dully, and gone home. Hell, it was a Tuesday. I opened one, poured it into a glass, felt my brain explode, and found myself at the store a week later when the samples were gone, gladly buying much more—and definitely not just for the portion size.

West + Wilder will host Taste for the Trails on June 15 in Calistoga, a “can only” wine event that benefits local trails in Robert Louis Stevenson Park.

Story by Will Carruthers