Shannon Moore sprinkles edible glitter over a cake fashioned to look like a rough-hewn log with a fern curling over one edge. The effect is frost-kissed and magical— as if this faux bois dessert had been discovered nestled in a forest. Moore’s baking style is a deftly built nest of contradictions: rustic and fancy, sweet and savory, nostalgic and modern. Her cakes have a whiff of mischief about them, while her pies conjure a Depression-era kitchen with a slew of tired farmhands clomping in for supper. Her favorite ingredient is the element of surprise. She’ll often give her concoctions a playful twirl, like Valentine’s Day heart cookies glazed with messages like “TEXT ME!”, “REALLY?” and “UGH!” or a Muppet Cake with a Crayola-hued rainbow of layers. 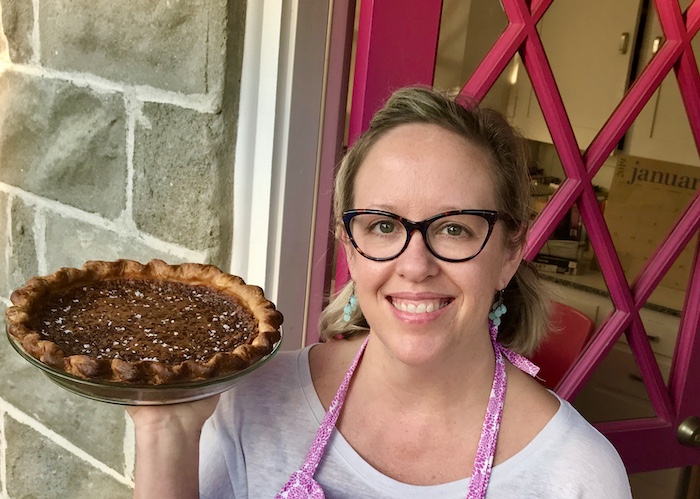 Born and raised in Memphis, Tennessee, Moore says she’s loved baking since childhood. True to her Southern roots, Moore likes to mix bourbon, browned butter, corn meal, sorghum syrup, sweet potatoes and even smoked bacon into her baked goods. At the age of 11, she suffered a life-changing loss: the death of her mother. Moore’s extended family stepped in to help raise her, and she recalls cooking together as “comforting.” She’d pore through cookbooks, an obsession she still indulges (including a monthly cookbook club with friends) but it was baking that pulled her in. She was naturally drawn to its order and precision, the straw-into-gold science of transforming simple ingredients—a humble egg white expanding into an ethereal meringue, a powdered grain giving rise to a voluptuous cake—and how making and offering such treats was a gesture of love. Moore’s father also baked, and she still slings his apple crumb pie with an added pinch of Chinese Five Spice and–as an ardent hater of pale, soggy crusts–bakes them ‘til they’re “brown, really brown, almost burnt.”

At 28, Moore moved west to Sonoma County. She worked as a baker at Downtown Bakery, Whole Foods, and Flying Goat Coffee. After years of production baking with its night-black hours, windowless kitchens, and scant contact with the eaters of her edibles, she crashed and burned. For the next year, she completely ignored the oven, pondering her next move, until a wise friend nudged her to revive her alchemical talents. 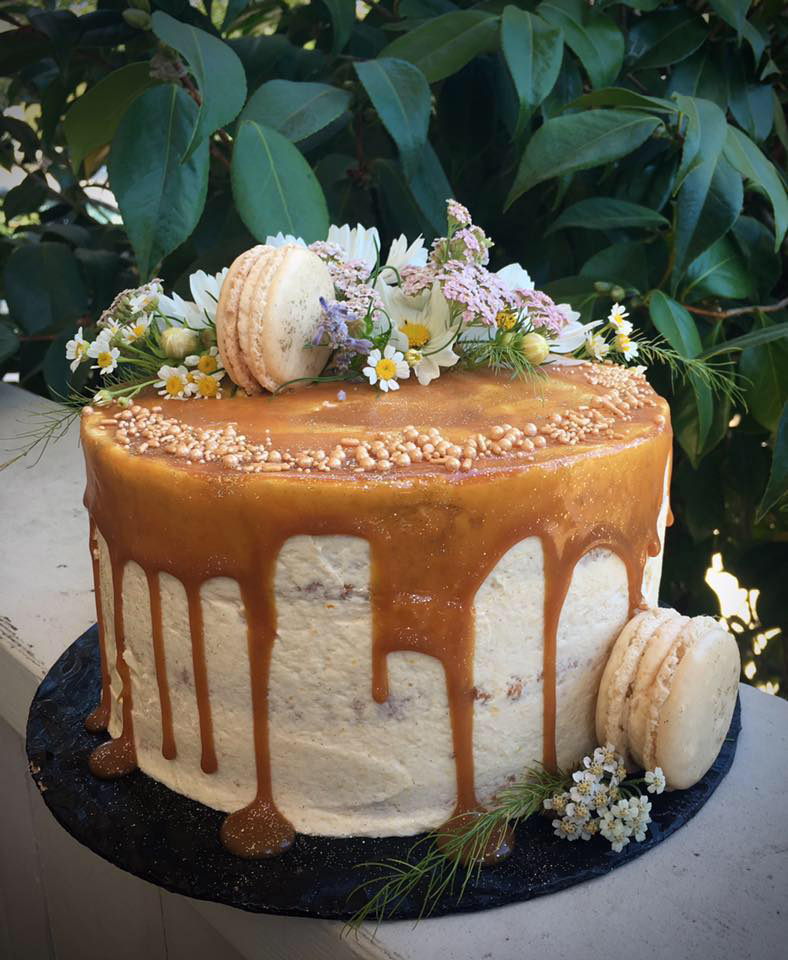 Moore began by banging out goodies from her home kitchen and holding bake sales in her backyard, “a side hustle,” she says. She reveled in the freedom to make whatever she fancied, selling her creations to friends. Soon she was baking a weekly, changing menu and posting dispatches via social media. Word spread, and Flour Girl was born. In the early days, Moore delivered around town by bicycle with mixed results: pies held up okay but cakes were less forgiving of potholes and heat waves. Still, the flame of Flour Girl’s oven had fully ignited and would not be snuffed out.

In a county known for “destination weddings,” Moore once suffered a mortal dread of wedding cakes, despite having baked her own (a raspberry and lemon curd affair, paired with a tiramisu groom’s cake). After much badgering by friends, she finally surrendered. She’s known for her stripped-down yet gorgeous and flavorful creations—adorned with fresh flowers, intentionally messified with a drippy glaze, or even left “naked,” a rustic look recalling laminated wood. Rather have a wedding pie? She’ll do that, too, or back you up if you want the pure fun of wedding cupcakes, even if your mother-in-law would be miffed (“It’s your wedding,” says Moore). What she won’t do is have truck with gluey fondant or that fluffy princess bride action.

Moore uses locally-sourced, organic ingredients whenever possible, but she makes no apologies for sugar. In her mind, baked treats are about celebrating love and pleasure, and—just like the absinthe-infused Sazerac she enjoys on a rare evening out—are meant to be special. Yet after many customer requests, she now bakes a portion of goods with her own gluten-free flour mix. Pssst, they are just that tasty. 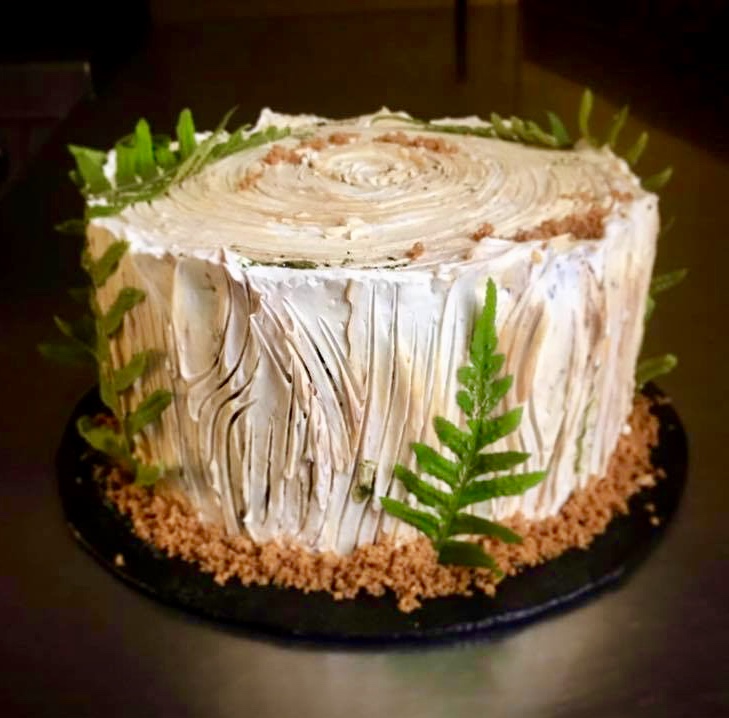 Behind all the sweetness and light is Moore’s single-minded commitment to her work. On a typical workday, she logs 12 to 14 hours. She’s been baking for about 20 years, and like most bakers and pastry chefs, carries constant pain in her moving parts. Her shoulders are frozen, her hands perpetually numb. Moore rarely takes time off, and after work, she reckons with the books, tests new recipes, or shops for ingredients. A baker’s assistant would be helpful but high overhead (rent of a commercial kitchen and a tiny pink-doored shop behind Cloverdale’s Plank Cafe) prohibits it. From the beginning, her husband, Stuart Fisher (orchard whisperer, barn doctor, friend of forgotten olives), understood her drive.

“When the workload was too much,” says Moore, “he jumped into an apron and learned how to make scones, pie dough, cookie dough, whatever was needed.” Fisher has schlepped bags of flour, made deliveries, and decorated wedding cakes. He grows organic flowers and herbs for the business, magically appears with a hot meal when Moore is crashing, and sometimes dispenses “tough love, even when it pisses me off.” He even plumbed in an old clawfoot bathtub at their rented farmhouse five miles outside Cloverdale so Moore could soak her weary bones.

Despite the physical toll and the uncertain future in running her small baking business, Moore’s large hazel eyes light up when talking about The Great British Baking Show (“The Brits are so polite!”) or her new favorite cookbook. When she describes the latest sweet-but-not-too-sweet recipe she’s developing, you can almost taste the sugar and love.

“You know how everyone has that thing they’re meant to do?” Moore says. “This is mine. I’m a baker.”