Prickly pears bridge the wild and the cultivated, giving us a fruit that’s adored by some and ignored by others. 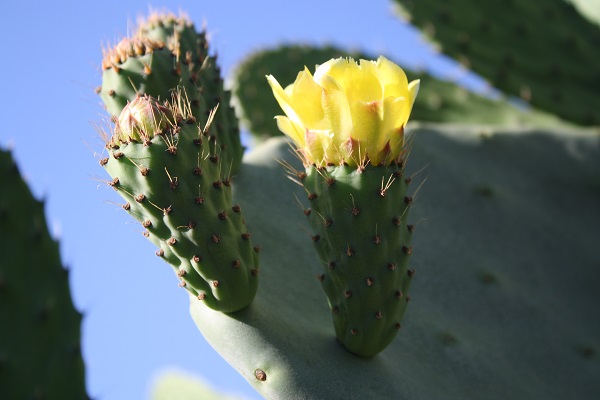 When did you last eat a prickly pear? Most Westerners have probably seen hundreds more of these hardy fruits than they’ve actually consumed. In the fall, they ripen on the lopsided, many-lobed cacti in the Opuntia genus that thrive in yards, parks, and office plaza planters across Sonoma County. Bulbous and ruddy like a clown’s nose, the fruits are at once familiar and otherworldly. Unlike, say, an apple, you can’t pluck one on the spot and sink your teeth right in. This very obstacle makes prickly pears perfect for curious opportunists. They are Easter eggs hidden in plain sight, yours to claim if you are armed with hunger and knowledge.

Like many fruits not part of the American mainstream lexicon, prickly pears have multiple names, often confusing: Indian fig, cactus pear, cactus fruit. In Spanish, the fruit is tunas and the paddle is nopal. Beloved in Mexican cuisine, they are utilized as both a fresh fruit and an ingredient. Prickly pears are succulent fruits in both senses of the word—they have a refreshing taste and texture with a hint of viscosity. There’s an element of watermelon to their flavor but with more of a kick.

There are many Opuntia species, and they can be hard to differentiate, though Opuntia ficus-indica is one commonly valued for its fruit. In Santa Rosa, a massive Opuntia grows at the Luther Burbank Home and Gardens. Burbank worked on and off for nearly two decades to breed spineless cacti, an undertaking he felt was hugely important. His main goal was to develop a drought-tolerant livestock “forage plant” to thrive in hot, unwelcoming conditions globally. But Burbank’s cacti were more delicate than other varieties and prone to growing spines if left to their own devices.

Even though his spineless cacti failed to make agribusiness waves, Burbank’s vision of propagating multi-use, drought-resistant plants was prescient. As today’s farmers consider a future cultivating orchard fruits like avocados, which are proving themselves increasingly finicky in California’s new reality of rising temperatures and limited water resources, prickly pears stand as a sustainable alternative. All that’s missing is consumer demand.

In the meantime, you can go on your own treasure hunt. Just be cautious of glochids—tiny, nearly invisible barbs on the fruit’s surface. Trust me, they hurt. Harvesting with gloves is advisable, but employing an old towel or T-shirt as a barrier will get the job done. Tongs also work. Then drop the prickly pear into a bin or bucket (not a cloth bag, which would retain the glochids).

Ripe fruits can be yellow, pink, red, or purple, but color alone isn’t much help in indicating readiness. If the fruits are ripe, they should have the softness of a ripe plum and release from the paddles with a gentle (and protected) twist.

You can remove many of the pesky glochids before picking by batting vigorously at the fruits with a bundle of small straws and sticks— primitive but effective. Be sure to stand upwind when you do this. Rolling harvested fruits in dry sand with a stick will do it too. Some folks torch them off but that’s a bit overkill. With any glochid removal method, it’s best to soak the fruits in a bowl of cool water and let any lingering fibers float to the top. Discard the water and you’re ready for the easy part. 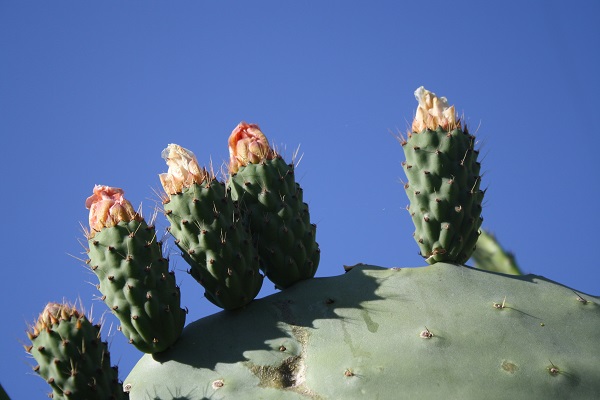 To peel the fruit, cut off the ends, then score the skin lengthwise with a sharp knife. Remove it from the flesh like a jacket. Or you can halve the fruits and scoop the flesh out with a spoon, as some do with kiwis. In Mexico, it’s a treat doused in lime juice.

Or juice the fruit to get its pulp: dump it in a blender and then run the liquid through a strainer to get the seeds out. No blender? Force the flesh through a sieve—wear an apron to avoid colorful spatters. This liquid can be used in any assortment of sorbets, fruit curds, preserves, paletas, candies, and even salad dressings. The character of prickly pear is no shrinking violet, and its juice will stand up heartily to boiling for jellied candies, jams, reductions, and syrups.

Locally, prickly pear fruits get the most use in drinks that serve to slake the thirst. Cider House 101 makes several prickly pear ciders. Bear Republic Brewing Company has brewed beers featuring prickly pears, and Healdsburg SHED has used prickly pears in shrubs. Bitter Girl Bitters uses homegrown prickly pears in their Mom’s Prickly Poms bitters. Flower and Bone has offered a ferment of the fruit on their cocktail menu. It’s not unusual to see prickly pear aguas frescas and margaritas at Mexican restaurants.

As climate patterns and access to water shift, could prickly pears be on deck as the next “it” fruit? Who knows, but the next time you run across an Opuntia in your daily routine, consider what it’s offering you—even if you don’t have designs to eat it.

Sara Bir is the author of the foraging guide and cookbook The Fruit Forager’s Companion: Ferments, Desserts, Main Dishes, and More from Your Neighborhood and Beyond.