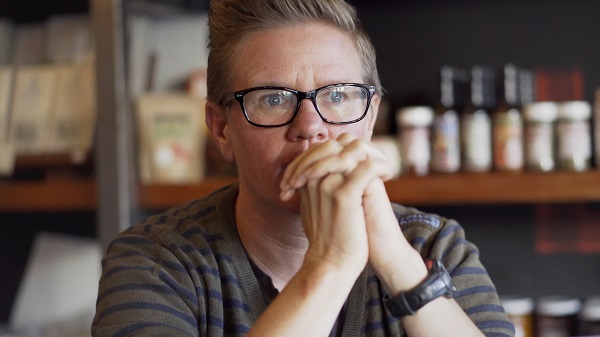 A boon is something helpful, beneficial. It’s a word with many definitions in entrepreneur Crista Luedtke’s life. Her rescue dog is named Boon because he was found in Boonville and was a helpful, beneficial addition to her life; her restaurant and hotel are named after the dog. There’s no doubt that Luedtke has been a boon to the town of Guerneville and to the Russian River economy in general. The question remains: Has it been a boon to her?

A former mortgage broker with a background in biotech sales and a passion for design, Luedtke fell in love with Guerneville in the early 2000s. She became fascinated with the area’s history of good times and tourism, its lore of a river so thick with fish a man could claim to walk across their backs from shore to shore, its memory of redwood-shaded big band dance pavilions, and its friendly welcome to the LGBTQ community. “I knew what [Guerneville] was,” Luedtke tells the camera. “It can be that again. It just needs some life.”

Luedtke, 44, was raised in restaurant kitchens. Her parents ran full-service dinner houses, and she remembers standing on a wooden box to reach the bar when mixing customers’ drinks. Her father, she says, was never home and eventually left her mother for someone he met at work. Luedtke and her former wife sold their San Francisco home and opened the boon hotel + spa in 2008 during the suck of the Great Recession and the swell of a historic rainstorm that flooded them out the very first night. Using $300,000 of their own funds and an additional $100,00 in credit card debt, the couple persevered. Exactly a year to the day after opening the hotel, they took a lease on the space that would be become boon eat + drink restaurant. For a while, it worked. But the relationship did not. Just as her father did, Luedtke sacrificed her marriage for her work.

“I was having an affair with my businesses,” she said. Once divorced, Luedtke had no reason not to throw herself wholeheartedly into creative matters. “My restaurant was doing great, the hotel was doing great, but there was nothing else going on in town,” she told filmmakers. So she opened the Big Bottom Market on Main Street in 2011, providing picnic items, salads, and a biscuit mix inspired by her mother’s recipe that made Oprah’s list of things she loves—and therefore sold in the thousands. Once the market was established, Guerneville’s Gourmet Ghetto really took hold, attracting the entrepreneurs who opened the Seaside Metal seafood restaurant, the pie/ice cream/jewelry mecca of the Bank Club collective, and an Airstream glamping resort. New owners revamped the Johnson’s Beach resort, and a Korean pop-up took over the local diner at night. Luedtke’s own mescal palace, El Barrio, opened in 2014. 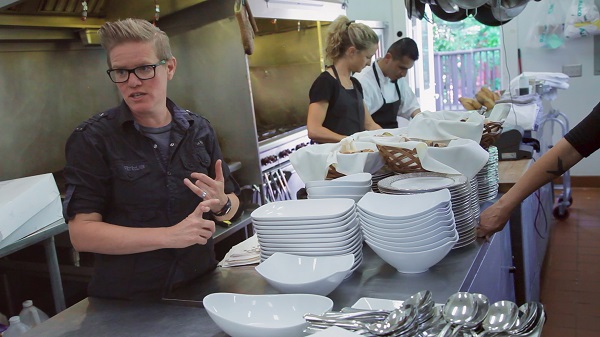 Then came the backlash. Residents accused Luedtke of being like Trump, someone who has to buy everything and brand everything. Town meetings were held, neighbors called her names. Empire shows the calls and the town halls. Luedtke knows her role in the changes. “Now, you can’t find a spot on Main Street and the rents have increased,” she says. “It’s kind of my own fault!”

In just 24 minutes, the documentary takes us through Luedtke’s euphoric highs and the swift sadness of her lows. She falls in love again. She goes on Guy Fieri’s TV show and wins. And most importantly, she takes over the kitchen at Revival, the revamped restaurant inside the Applewood Inn, and has her first failure. Spooked by the waterfall of cash required by a restaurant start-up, investors pull out after just six months. We see Luedtke weep and feel as shy as the staff who avoid her eyes. We also see a woman torn by ambition, one curiously impacted by the very filmmakers themselves. Just weeks after opening Revival, Luedtke sets off for Asia with Congden and Holland, who have teamed up with her to create Places and Plates , an Anthony Bourdain-style traveling food show. On the road, Luedtke is soon fielding 30 texts a day from freaked-out Revival staffers and investors who need her on-site. Nothing’s getting enough attention; nothing is working right. The filmmakers capture it all without implicating themselves.

Empire on Main Street won Best Documentary Short at the 2018 Sonoma International Film Fest and was voted best documentary at the American Pavilion this year at Cannes. It’s a story still writing itself. Perhaps it’s still too soon to tell if it’s been a boon to Crista Luedtke at all.