When Richard and Marilyn Hughes purchased 182 acres off Bodega Highway in 1976, they didn’t aspire to become leaders in climate-smart farming. As first-generation dairy farmers, they did have passion for the work, and a desire to make a living while raising two children. As Hughes puts it, “We came here with a hope and a prayer.” Forty-one years later, Hughes Dairy is an award-winning organic operation that produces butterfat-rich Jersey cow milk for Straus Family Creamery. The dairy, midway between Sebastopol and the coast, is an example of how dairy producers—often cast as aiders and abetters of the climate crisis—might provide economic, agronomic, and environmental benefits to the local ecosystem. 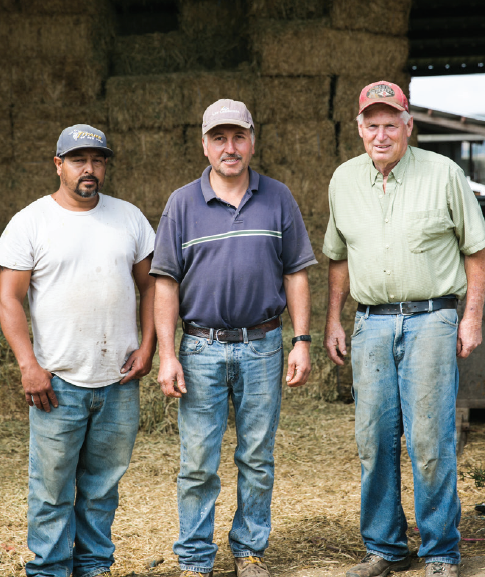 Of course, the negative stain on the dairy industry is based on legitimate and concerning data. Methane emissions from livestock account for more than 50 percent of California agriculture’s greenhouse gas emissions and three percent of the state’s total emissions. Earlier this year, Governor Brown signed Assembly Bill 617, an air pollution measure that, in part, requires dairy farmers to reduce methane emissions by 40 percent by 2030.

While the legislation might strike fear in the hearts of dairy farmers who don’t utilize alternative manure management practices, at Hughes Dairy—which won the Sonoma County Farm Bureau’s 2016 Luther Burbank Conservation Award—systems are already in place to lessen methane emissions. Most began in 2006 once the dairy transitioned to organic and began sourcing to Straus. Over the years, the Hughes have replaced deep plowing with an essentially no-till system, switched from confined Holsteins to pasture-raised Jersey cows, installed a 1.5 million-gallon rainwater harvesting and storage system, and established alternative methods of manure management known to lessen methane emissions.

“Over the years, I changed my whole farming program,” Hughes said during a recent tour of his dairy, which is home to 190 milk cows and 400 animals total. “The organic program means taking care of the soil and the plants. I have to give the cows the best feed that I can to get the most amount of milk. The same thing with my soil and land. I have to feed the soil that I take off to give as feed to the cows. I have to develop a balance between my soils and the crops. That’s been my whole philosophy.” 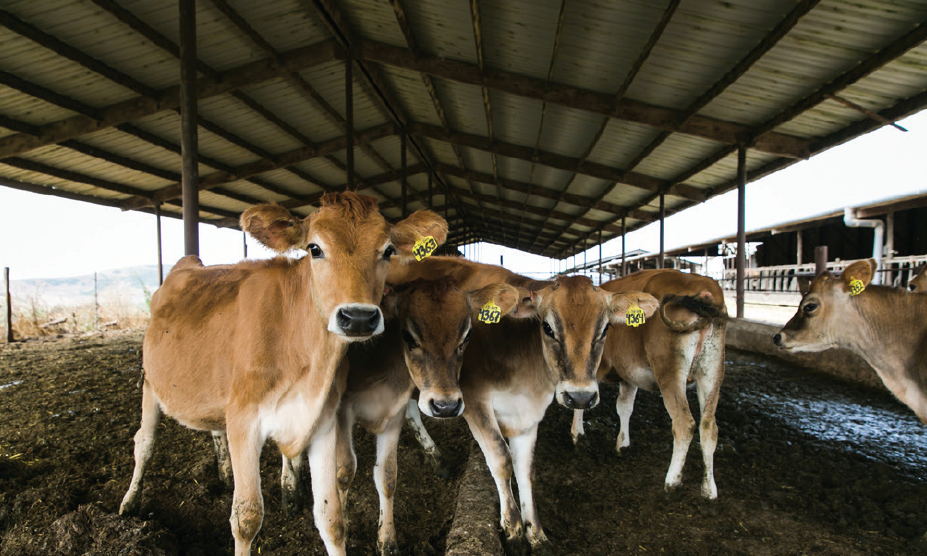 Jerseys in the milking barn

Hughes switched out Holsteins for Jerseys (it was Marilyn’s idea) just prior to going organic. The Holsteins were confined, but the Jerseys are outside most of the year. “Cows on pasture are healthier,” said Hughes, wearing a red baseball cap over his silver hair and a work shirt tucked into Dickies jeans. “Imagine living in an office all of your life and never going outside and walking. You don’t have an ability to expand your lungs. The Jersey cow likes to walk. Our cows are out on the fields 250 to 270 days out of the year. The only time they’ll be in the barn is when the rains are heavy and the ground is too wet for them to be out.”

Of course, pasture-raised cows poop the same as confined, industrially raised bovines. And that waste causes dangerous emissions. This is where the Alternative Manure Management Practices Program (AAMP) comes into play; it’s funded by the state of California through the cap-and-trade program. The California Climate & Agriculture Network (CalCAN) has argued that legislators should give equal standing to funding alternative practices they do to dairy methane digesters within the $50 million Dairy Methane program. This would allow more small and medium-scale dairy farmers in California to implement some of the same practices as Hughes Dairy.

Larger organic dairies like Straus in Marin County have used methane digesters with great success. Other digesters are underused or left to flounder after breaking down: the high-tech machines efficiently convert manure into renewable energy. But at a cost of $1,350 to $3,400 per cow, they can be prohibitively expensive for small-scale farmers. In contrast, low-tech solutions like cement pits with weeping walls can cost as little as $86 per cow.

Today, Miguel, one of Hughes’ two full-time employees, runs a tractor through the barn to demonstrate the “scrape” technique. The tractor mechanically moves manure from the barn into a holding pit. A relatively simple technology called a “weeping wall” then separates the solids from the liquids. The solids are pumped into a truck, and hauled back out to be spread on the fields where they add nutrients back into the soil. The liquids irrigate the pastures through four traveling sprinklers.

This is significantly different from large-scale conventional dairies where manure is stockpiled in lagoons leading to anaerobic conditions (without oxygen), a technique that results in significant methane emissions during the decomposition process. A system like Hughes’ not only quickly shifts the liquid out of the pits, leading to less anaerobic conditions, but also provides potent manure for his fields, which Hughes said leads to high-quality rye cover crops and no need to supplement with outside inputs—aside from chicken manure purchased from a Santa Rosa farmer. This year, the dairy is on track to get 1,300 tons of silage, or animal feed, off the fields.

“Without this system, Richard would be importing more feed—which leads to more carbon emissions and a need for outside resources,” said Brittany Jensen, executive director of the Gold Coast Resource Conservation District (GCRCD). “He doesn’t have to pay for supplemental feed, and he’s reducing methane from the pond because it’s empty. This also reduces greenhouse gas emissions from trucking.”

Aside from problematic methane emissions, dairies are thirsty. With support from GCRCD, Hughes was able to install a rainwater harvesting system a few years ago. In the past, the dairy diverted about 7,000 gallons weekly from Salmon Creek. The new system captures up to 1.5 million-gallons of rainwater off the milking barn roof each year, which is stored in a catchment pond. It’s enough water to get Hughes through the dry season while bolstering resources during droughts. And the salmon have a chance to thrive.

“Dairy producers like Richard provide models for how to reduce methane emissions while also improving soil health, water quality and forage productivity,” said Renata Brillinger, CalCAN’s executive director. “With incentives funded with revenue from the state’s cap-and-trade program, even more dairies could transition to manure management practices like these.” In late August, the California Dept. of Food and Agriculture announced that between $9 million and $16 million in grant funding is now available to fund alternative manure management projects statewide. A grant application workshop is scheduled in Santa Rosa for September 8.

Earlier in the tour, while talking about his pasture-raised cows, Hughes said, “If you have enough land, I would highly recommend doing it this way. It really makes a difference. I’m sold on it.” It’s not a stretch to say the same for the entire dairy, where regenerative practices meet the daily reality of getting milk to the creamery, and eventually into the mouths of consumers.

Straus Introduces a Manure-Powered Feed Truck
Albert Straus, CEO and founder of Straus Family Creamery, is no stranger to sustainable agriculture innovations. For example, his Marin 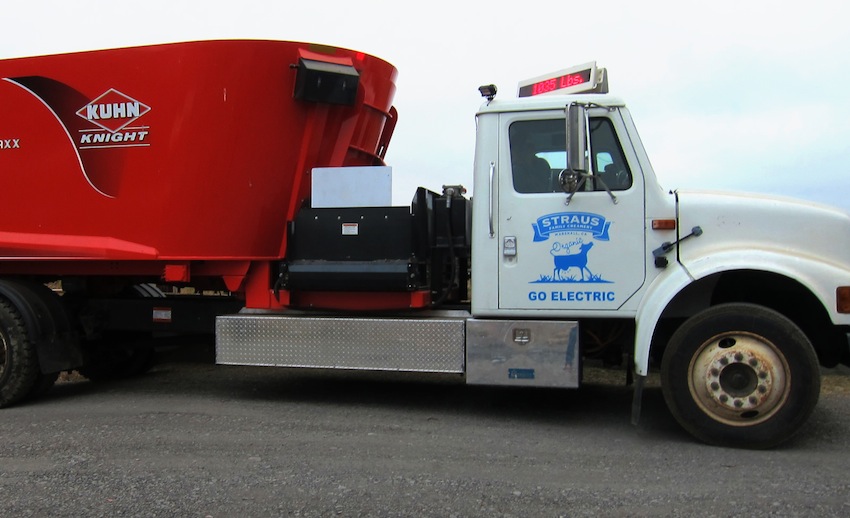 County dairy is working with the Marin Carbon Project on a 20-year carbon farming plan to sequester 2,000 metric tons of carbon every year. And, this past July, the company took another step towards the goal of building a “carbon-positive” operation with the debut of an all-electric-powered feed truck. Eat your heart out, Tesla! Eight years in the making, the 33,000-pound truck—which was built with the help of a local mechanic—is completely charged by electrical power generated from methane gas produced from cow manure. While global methane emissions from improperly managed animal manure is a major contributor to greenhouse gas emissions, when used in conjunction with methane digesters, manure can actually be turned into useful energy. Using a multi-step flushing, scraping, separating, and composting process, these digesters convert 4,000 tons of manure a day into renewable energy through anaerobic digestion. The 500-acre Straus farm—along with a few vehicles and farm machinery—has been powered by digesters since 2004. Now, the feed truck, the first of its kind in the world, joins the roster. How’s that for a closed (poop) loop?