Waste not, want not

Most Americans are wasteful. Not because we’re mean, but because we’re so accustomed to abundance that we don’t even think about it. Take food waste: About 40 percent of all the food grown in the United States is wasted before—and after—it gets close to our mouths.

In Sonoma County, several initiatives have sprung up to reduce waste. One is Preserve Farm Kitchens, owned by Merrilee Olson, who recently transplanted to Sonoma County from Marin, where she operated for the last five years out of Community Action Marin’s commercial kitchen.

In 2010, Merrilee started the business as Preserve Sonoma, working out of the old Capers and Co. kitchen in Sebastopol. The idea for the business leapt out at her during a visit to the farmers’ market. She was stunned to learn that if her favorite strawberries were not sold that 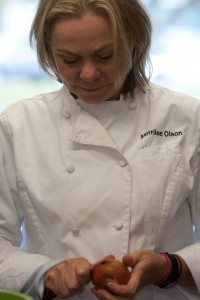 day, they’d end up in the compost heap. What a waste.

She scooped them up, making a promise to the farmer to convert them into preserves instead. It soon dawned on her that a whole lot of unused produce from local farms experienced a similar fate. If she could divert waste from the compost pile or landfill, it might also provide a small monetary benefit to farmers.

Merrilee landed on a great idea and a simple concept that mutually benefits farmers, consumers, and the general public—almost a guarantee it will be nearly impossible to execute in our bizarro industrial food chain supply system, which seems to abhor conservation, waste diversion, and common sense.

Food systems follow a logic that drives the cost per unit of produce to the lowest point possible when acquiring it from the farmer. Farmers produce as much as the elements allow, hoping to sell it all. But not all produce is retail marketable. Only the near perfect pi eces make it. They are presented as a rare thing, like an unblemished jewel. Then there’s the secondary market, where prices are a small fraction of those reserved for retail-worthy pieces. Sometimes the prices are too low for farmers to even care about trying to sell to secondary markets.

Preserve Farm Kitchens settled into Petaluma this summer and started production. Merrilee faces a number of hurdles in creating a successful regional brand for an array of preserved products, from fruit jams to tomato sauces. Commercial kitchens aren’t cheap—and there’s the cost and challenge of attracting workers in Sonoma County.

But the thing that really makes for a challenge is the risk that local consumers won’t pay a little more for a jar of tomato sauce from locally sourced, (mostly) organic produce for which she pays a fair trade price to the farmer.

To make sauce, large food processors pay as little as six cents per pound for conventional tomatoes and up to 25 cents for organic tomatoes. Out of a desire to pay a fair price, Merrilee pays $1 to $1.60 to farmers. This enables her products to meet the local consumer demand requirements that so many claim is important. But how much of a premium they’ll pay remains to be seen.

Merrilee envisions building a regional food processor brand, which would need to sell anywhere from $1.5 to $5 million in products per year to be profitable enough to survive. E.F. Schumacher, a British economist and author of Small Is Beautiful, would likely have admired the scale of operation she proposes. Merrilee needs consumers who say they believe in the health benefits of local, organic food, who believe in paying farmers and workers a fair, living wage, and who believe in diverting perfectly edible produce from the landfill or the compost bin. She’s counting on folks to vote with their pocketbooks at the local grocer and buy Preserve Farm Kitchens’ products. We hope she’s right that local consumers will put their money where their hearts are. After all, $5 million out of billions of dollars in regional food sales is a meager but hopeful start in reimagining a just, healthy, and local food system.

For more information, go to preservefarmkitchens.com