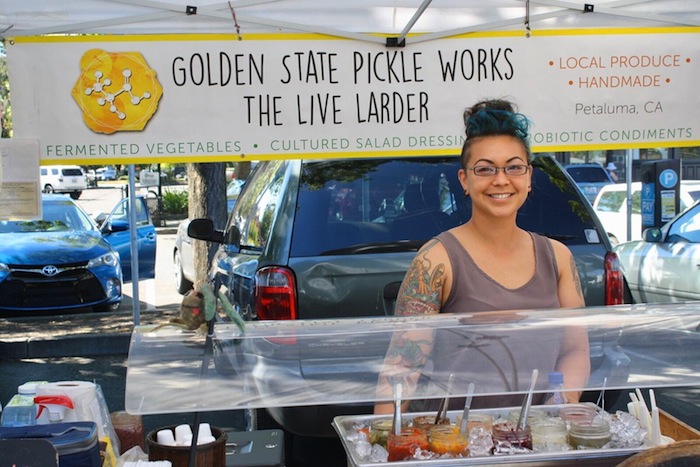 In a small industrial kitchen off Lakeville Highway in Petaluma, Samantha “Sam” Paone and her team are busy seasoning tubs of yellow beet slaw. Golden State Pickle Works, the company Paone founded with her husband Anthony, celebrated its third anniversary in May and shows no sign of slowing down. Today, they’ll go through over 200 pounds of cabbage and other assorted vegetables, only part of the production of the current product list.

Paone, originally from Kailua, Hawai’i, spent over a decade working in the kitchens of high-profile, fine dining establishments like Boulevard in San Francisco and Commis in Oakland before moving to Kenwood for another restaurant position. The slower pace of Sonoma County allowed time to contemplate her future and play around with some of the beautiful produce available. Eventually, she realized she wanted out of the restaurant business. But, why the move into pickles?

“I felt like it was the aisle at the grocery store that needed the most help,” says Paone. Many Americans, she adds, have unpleasant childhood memories of soggy, pungent sauerkraut on top of a ballpark hot dog, or are brought up to prefer sweet, vinegary pickles. Getting them to open up to fermented foods can be a challenge. To address this, Paone does younger ferments, meaning not as much time is allowed for the whole process, which can be more approachable for those uninitiated into the delicious world of fermentation. An added creative bonus comes in being her own boss. She has the freedom to experiment with what works and what doesn’t.

Paone’s foray into fermentation arose when she worked in restaurants and was charged with buying produce. That’s when she developed a distaste for waste. “Sometimes we wouldn’t go through everything,” she says. “Or mistakes are made and you accidentally order things when you already have some. The only way to keep the produce from going bad is to preserve it.”

This urge to repurpose led to the development of the rest of her product line, including dressings and condiments. “Things don’t always work out in the fermentation world,” she says. “Cucumbers get soggy a lot, and so we’ll put those into a fermented ranch dressing.” In another case, radish tops that would normally get tossed might get fermented, dehydrated, crushed, and mixed with seaweed to make a Japanese furikake seasoning.

The company’s lineup of briny goods doesn’t center around traditional cabbage sauerkraut and kosher dills—though they do make those. Paone finds her greatest inspiration in the produce at local farmers’ markets. She rotates through about 35 products over the course of the year. This doesn’t include a handful of experimental products like romaine lettuce fermented in coconut water—a lighter, softer version of sauerkraut. It’s an inventory and ingredient list more akin to your favorite locavore restaurant menu than the jarred pickle aisle at the grocery store. A spring slaw is a refreshing blend of green garlic, English peas, spring onions, and ramps—all items you’d be hard-pressed to find once the seasonal farming window has passed. When cucumbers aren’t available, Paone isn’t afraid to substitute kosher dill radishes. The items are sold online and at the Golden State Pickle Works booth at farmers’ markets in Healdsburg, Santa Rosa, Petaluma, Sonoma, and Marin.

And while fermented foods are all the rage, Paone’s style is anything but “follow-the-crowd.” For instance, she resisted doing traditional Korean kimchi for a long time until she could come up with her own take.

“What is kimchi?” says Paone. “It’s chili-rubbed [vegetables]. So, I made cauliflower and chilies, which is like if Mexico made kimchi.” She uses a blend of guajillo, ancho, and chipotle chiles, resulting in a smoky cauliflower pickle with a rich and complex flavor profile that you’d do well to pair with a plate of carnitas.

With lots of fermented food businesses in Sonoma County, it’s a challenge to stand out from the crowd, but Paone has the advantage of looking through the eyes of a trained chef. She encourages more people to open up to fermented foods, even if that means taking baby steps. Her best-selling allium mayonnaise, made with fermented fennel, onion, and garlic, for example, is a good “starter food” for anyone resistant to pickles. Even more, Paone is driven to contribute to America’s own food heritage, one jar of pickles at a time.

“Everywhere else in the world has a depth of culinary history, and they’ve practiced for thousands of years,” says Paone. “America is still so new. Now I’m taking Eastern European techniques and Asian techniques and looking at them through an American point of view, using American ingredients.”