Take a Little Trip: Psychedelic Cannabis Therapy helps people unpack and deal with their stored-up past 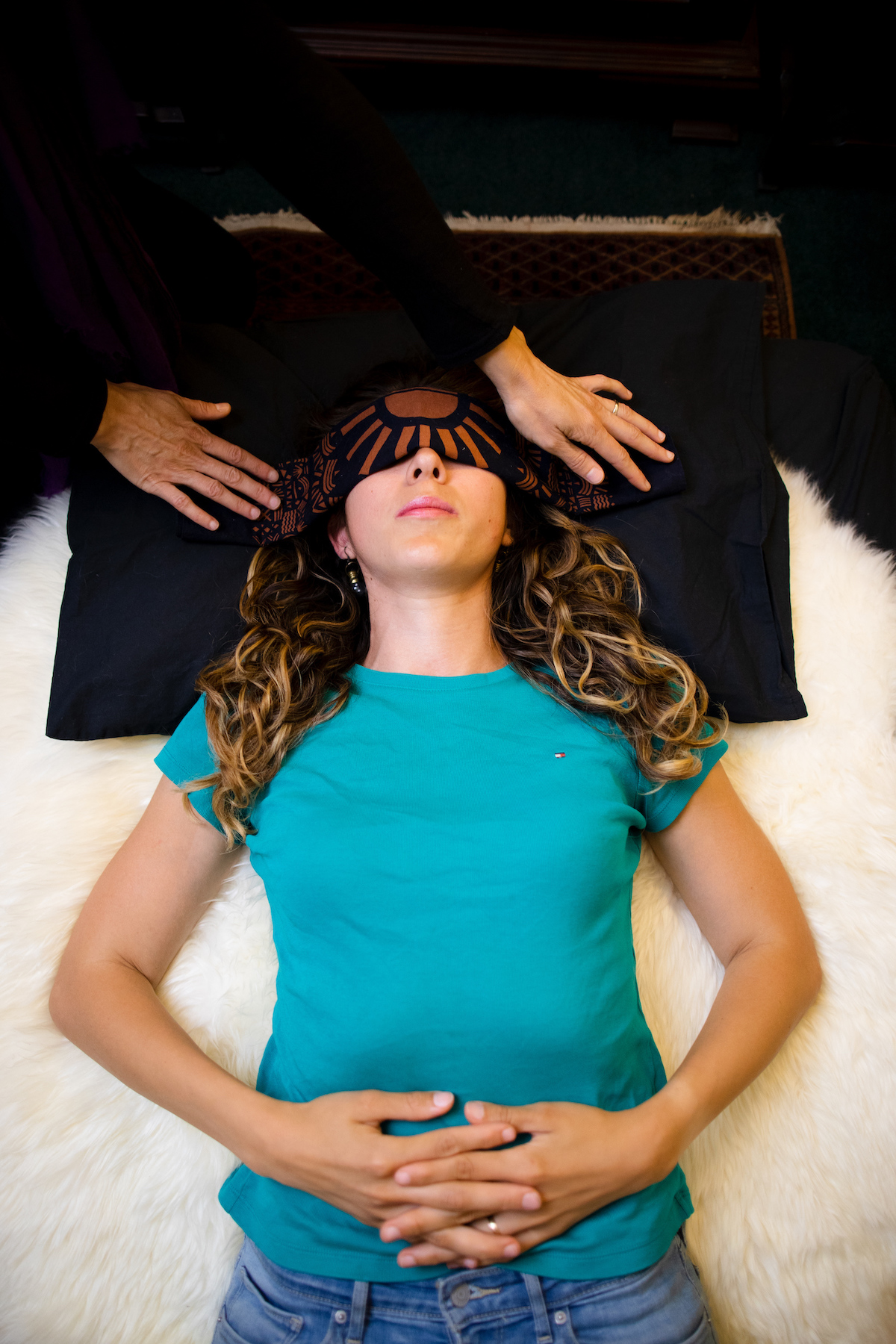 In a 1957 meeting of the New York Academy of Sciences, British psychiatrist Humphry Osmond first coined the term psychedelic. Using the Greek words for mind (psyche) and to make visible (delos), he defined it as “mind-manifesting” and wrote in a letter to Aldous Huxley, “To fathom hell or soar angelic/you’ll need a pinch of psychedelic.”

Osmond’s research with LSD and mescaline had led him to conclude that radically altering people’s consciousness in a way that was “clear, euphonious and uncontaminated by other associations” could help them cope with mental illness and perhaps kick alcohol addiction. He was the one who provided Huxley with the mescaline—and who sat with him during his trip—that inspired the writer’s famous book, The Doors of Perception.

In a similar vein, local practitioners Lani and Chris Lee are part of the burgeoning movement of therapeutic psychedelic treatment, though they are not focused on the more popular medicines like psilocybin, ketamine, and MDMA, but on what they argue is “perhaps the best psychedelic for trauma resolution”: cannabis.

Lani, a somatic psychotherapist, and Chris, a massage therapist and mindfulness coach, are both trained practitioners in mindfulness-based psychedelic therapy, offered through their clinic, CannaCocoon, the only one of its kind in Sonoma County.

“There are things we sometimes can’t get to in regular therapy that cannabis makes accessible,” says Lani, who is soft spoken with bright, warm eyes. She started her training in psychedelic therapy in the fall of 2019, during the Kincade Fire. While experiencing the cannabis journey that she was learning to facilitate, she confronted memories of fleeing a wildfire in Laguna Canyon when she was 13 years old. Her mom had picked her up from school with a car full of their things and a Polaroid of the flames that would consume      their home.

“When someone uses cannabis, the amygdala softens and the hippocampus releases memories that haven’t been entirely processed,” explains Lani’s teacher Daniel McQueen, founder of the Center for Medicinal Mindfulness in Boulder, Colorado, one of the first clinics in the nation to offer legal psychedelic plant medicine therapy. THC, the compound known as a cannabinoid that gives marijuana its psychoactive properties, can act on our body’s endocannabinoid system in beneficial ways—including helping clients to lower stress levels and overcome fears. Trauma often results in anxiety and depression, which are sometimes treated with pharmaceuticals. While crucial for some people, those synthetic medicines don’t necessarily get at the root of the trauma like cannabis, which can help people access the parasympathetic nervous system, sometimes referred to as the “rest and digest state.” Instead of the fight or flight response of our sympathetic nervous system, this system is in charge of relaxation, allowing us to use the simple tool of breath, for example, to move through uncomfortable sensations and memories.

After going through her own psychedelic journey, Lani could feel that her nervous system was “much more restored. That childhood memory was put in place,” she explains. “The smoky skies during fire season were no longer as activating.”

“Being an adult with your younger self is so powerful,” Chris tells me on a July afternoon, from the calm confines of the clinic. “We are always working with opposites,” he continues, noting that clients can choose to move towards painful memories or away from them—that this maintaining of agency is what differentiates cannabis from, say, psilocybin or ketamine, which are known to radically alter consciousness.

His clean, dim office space contains a simple, uncluttered desk and a hanging philodendron in the window, a large Japanese tapestry on the wall. An elaborate sound system connects to bass speakers built into the twin mattress on the floor, where, after imbibing seven hits of cannabis flower—one for each of the seven directions—clients lie down with an eye covering and weighted blanket (if they choose). Their journey begins to the tune of electronic symphonies and their facilitator’s voice gently guiding them through a body scan meditation.

It’s the ritual—what they refer to as “set, setting, and intention”—that differentiates this experience from merely getting high, which, as Chris puts it, “Allows you to be on the edge with your past but not overwhelmed by it all.”

The journey is entirely self-led. The client decides how much to imbibe and, if it’s too much, they can sit up, remove the eye mask, sip some water, and immediately feel less intensely the cannabis at work (and if need be, they have a CBD antidote on hand, which lessens the effects of the THC). Some remain silent, others talk. 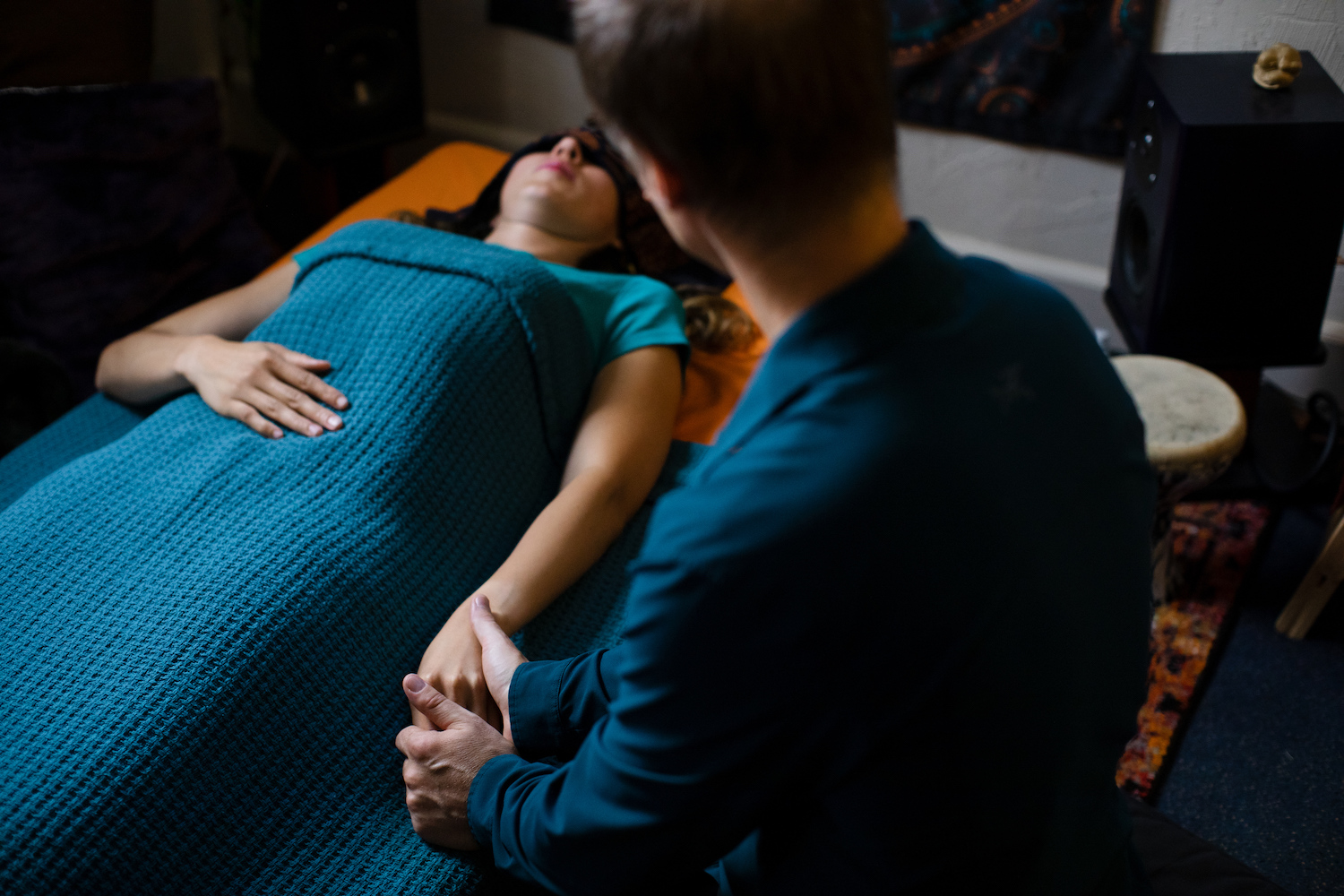 Clients report a range of effects, including increased bodily awareness, deeper connections with intuition and the sacred, feelings of being present, and like they have more agency in their lives. Many people feel a sense of trauma resolution after just one session; some “flap like a fish” as they re-experience what injured them, a primal “shaking off” of the trauma common in other mammals after the initial fight or flight reaction to threatening circumstances.

As one recent client puts it, “This therapy enabled me to engage more directly with my own fears in a way that felt safe and contained. Since the session, I’ve felt more present in my relationships and less inhibited by anxiety.”

Two years ago, a study done by The Multidisciplinary Association for Psychedelic Studies (MAPS), a nonprofit founded in 1986 in San Jose, found that veterans who used cannabis regularly reported a measurable decrease in the severity of their PTSD symptoms, and were subsequently significantly less likely to meet the diagnostic criteria for PTSD than those who did not use cannabis.

“And that was with shitty Mississippi weed that looked like pine needles!” says McQueen with a laugh. (Until recently, all FDA-approved cannabis studies were conducted with marijuana grown at the University of Mississippi.)

For therapeutic journeys, clients provide their own cannabis, which should be high-quality, organic, and potent (THC levels of 25% or higher), and ideally a blend of both sativa and indica. “You get the creative high of sativa and the body relaxation of indica,” McQueen explains, “so that your heart is in an open state and your body is in a deeply physically relaxed state.”

Humans have been growing and using hemp and its psychoactive counterpart, cannabis, since the dawn of the agricultural revolution some 10,000 years ago. In 2009, paleoethnobotanists uncovered a stash of 2,700-year-old cannabis in the burial pit of a man, likely a shaman, in northern China, according to archaeologist Stephen E. Nash. Ten years later, they discovered large smoking vessels with high concentrations of cannabis, indicating that people were burning and inhaling the substance, likely for “psychoactive or divinatory practices.” 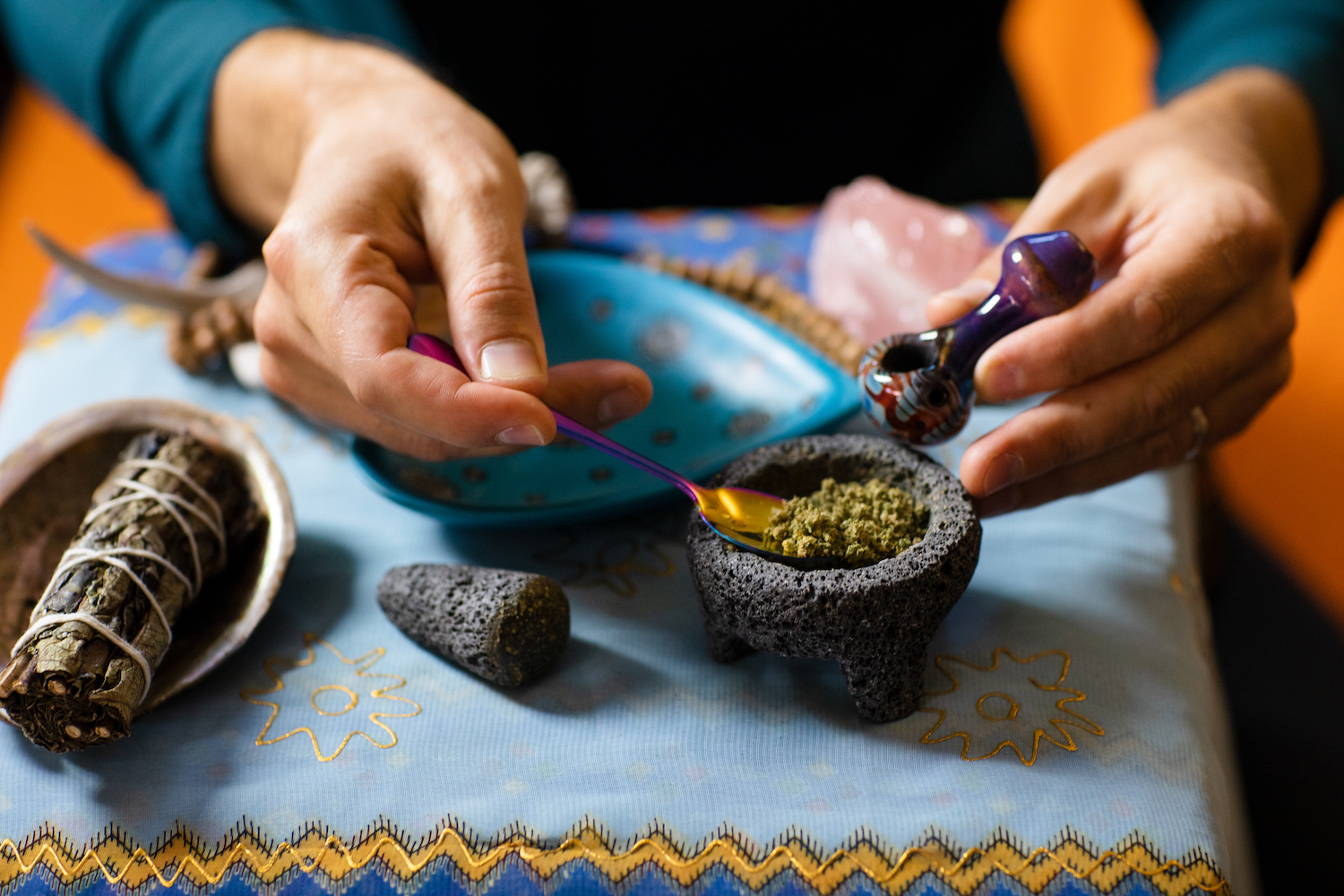 Beginning in 1850, medical practitioners in the US used cannabis as a treatment for neuropathic pain, an ailment that continues to be ameliorated by it, according to studies done by UC San Diego’s Center for Medicinal Cannabis Research, established in 2000 and currently the longest-running cannabis clinical research center in the country. Their studies have also shown measurable positive effects of cannabis on insomnia, glucose metabolizing, gut health, cognition, inflammation, and the list goes on.

But thanks to decades of prohibition, kicked off by the 1936 propaganda film Reefer Madness, which showed marijuana users becoming insane criminals—and despite the fact that it remains the most commonly used federally illegal drug in the country and that 38 states have legalized it for medical purposes—cannabis is still plagued by the stigma of its label as a Schedule 1 narcotic by the FDA.

While the Lees contend that cannabis has been grossly mislabeled and lament that the federal government doesn’t spend more time and money researching its psychological benefits, they do not take lightly its potency. Before a client undergoes a psychedelic journey with CannaCocoon, they’re asked to answer questions that explore mental health, receptivity, safety, and readiness, and are briefed about what     to expect.

Most of Lani and Chris’s clients are people they’re already working with, in psychotherapy or bodywork settings, and the cannabis therapy provides a valuable adjunct to their existing treatments—this is not psychotherapy, but a mindfulness practice that has therapeutic results.

After more than 260 hours of training and a year of operating their clinic, the Lees are excited about sharing their knowledge. “We are activists in this field,” Lani tells me. “We now have an embodied understanding of this therapy, and we want to bring its healing power to our community.” 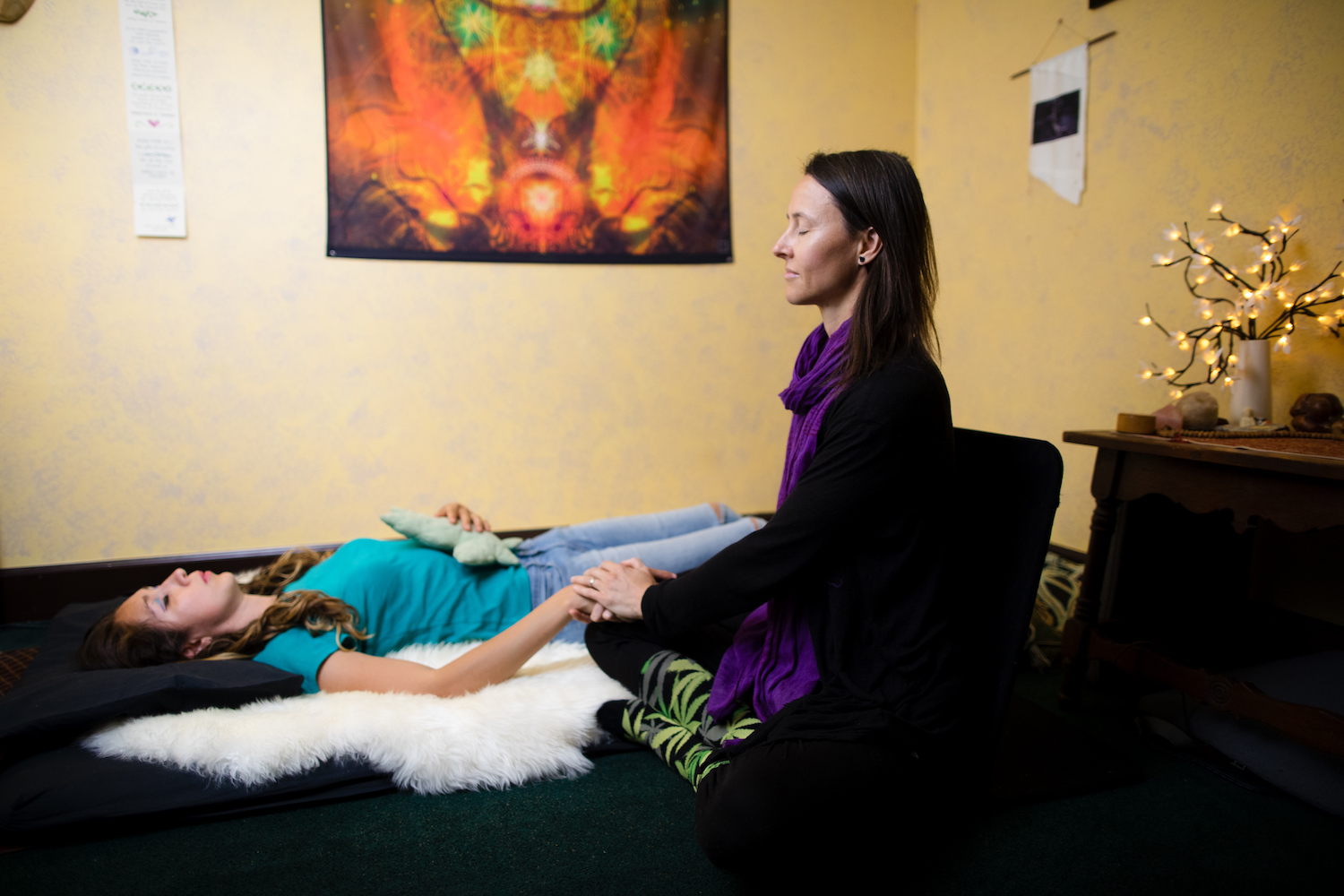 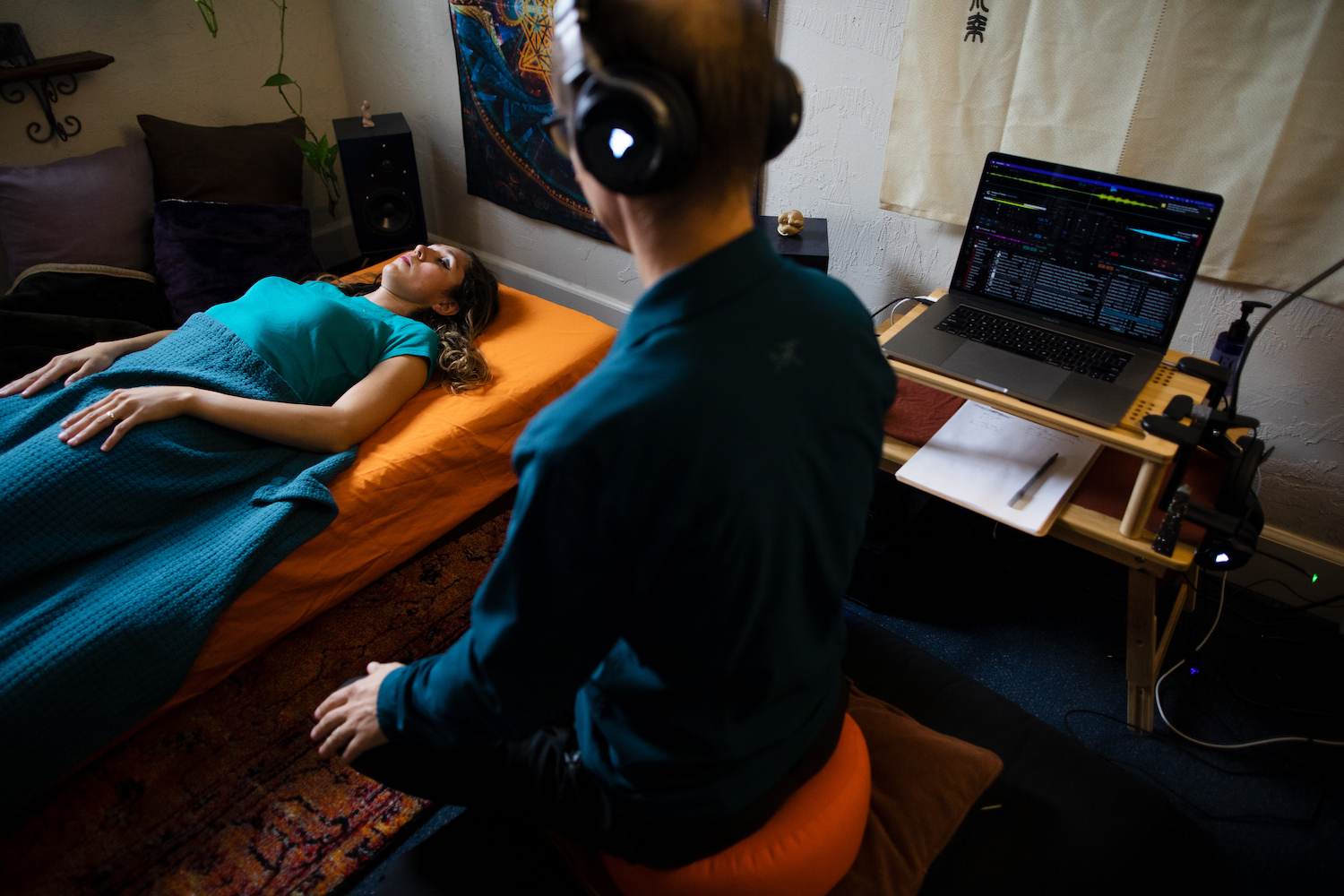