The Hands that Feed Us

Things were finally back to normal for Jennifer Reichardt and her ducks. Last October’s Kincade fire, which scorched nearly 80,000 acres, thankfully never reached her family’s Petaluma farm. But the resulting blackouts did.

Reichardt, together with her Sonoma County Poultry team, scrambled in vain to find enough generators to keep the farm going. By February, business was back on track, delivering to the Bay Area’s finest eateries.

“It was like a light switch going off,” says Reichardt. The specter of Coronavirus, which for months had lurked in news headlines, arrived in California. Among the victims: restaurants. On March 13th, the president declared a national emergency and three days later Governor Newsom ordered a statewide shelter-in-place order, which banned dine-in restaurant service. Only “essential businesses” were allowed to carry on. Agriculture was, of course, deemed essential. But during the next few days, Reichardt watched helplessly as cancellations poured in. By the following week, Sonoma County Poultry hovered at 15 percent of their normal sales. 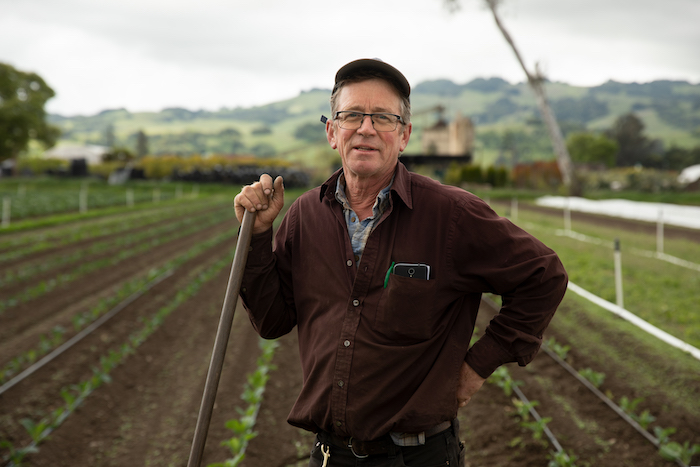 A fifth generation duck farmer, Reichardt helps to manage the farm alongside her father. But as a side hustle, she also runs her own small-batch line of organic wine. A labor of love, her wine doesn’t quite pay the bills yet. But at least the nature of the product provides one clear advantage since, “You can’t put a cork in a duck.”

For those unable to pause production of livestock or perishables, interruptions in the market threaten already thin profit margins. “We’re a small operation,” says Reichardt, “with only a handful of employees. But each of those employees has a family. So the impact ripples out. Our priority right now is to keep everyone safe and employed.”

Which means selling more duck. And doing so in new ways.

Luckily, multi-generational farms can combine sage wisdom with savvy innovation. While the rest of her team doubled-down on food safety precautions and temporarily cut production by half, within days Reichardt had launched a direct-to-consumer campaign and e-commerce website. In one week, they shipped out 177 packages. For now, that’s allowed them to keep the lights on, the ducks fed, and her team paid. “I know the recovery won’t be a light switch back on,” says Reichardt. “For now, we’re taking it one day at a time.” 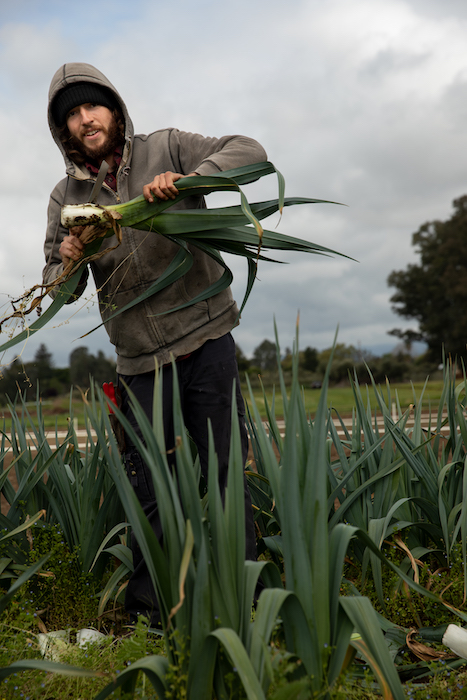 Just across town, in a 14,000-square-foot warehouse, a busy team scrambled to assemble hundreds of boxes while a pair of trucks backed up at the loading dock, preparing for a long, circuitous journey into the city. This is FEED Sonoma, which might just be the greatest success story for the region’s local food movement in the past decade. And whether it can adapt to the current crisis may determine the fate of that movement in the years ahead.

Nine years ago, FEED Sonoma fit inside Tim Page’s garage. With one employee and a loose association of a dozen farms, his idea was simple, even if the odds were slim: unite notoriously independent growers for a collective enterprise. Food distributors aren’t rare, but what FEED Sonoma set out to do was: to work with the smaller producers (that most distributors never bother with) and partner with buyers, from restaurants to company cafeterias, committed to using their purchases to empower regenerative practices, local food, and family farms.

Tended by community, hard work and a little madness, that vision grew. By 2020, FEED Sonoma was aggregating nearly $4 million worth of food from over 80 farms to hundreds of buyers across the Bay, employing 15 people. And this was going to be the year that FEED Sonoma realized its ultimate vision: becoming California’s first farmer- and employee-owned fresh-produce cooperative.

In nature, a keystone species is one that has a disproportionately large effect on its environment. From wolves to kelp to pollinating bees, the extinction of a keystone species would fundamentally restructure its ecological community. In that vein, FEED Sonoma has become a keystone food business.So when over 90 percent of their sales vanished in a single week, it was all hands on deck.

Like Reichardt, Page and his team made an emergency u-turn, shifting towards an entirely new business model: direct-to-consumer deliveries. The FEED Bin is what you might call an aggregated CSA, Community Supported Agriculture. This model, already exemplified by several local farms such as Singing Frogs and Laguna Farms, allows customers to purchase a “share” to become a farm “member.” Throughout the year, the farm delivers a box featuring seasonal goods, typically weekly. 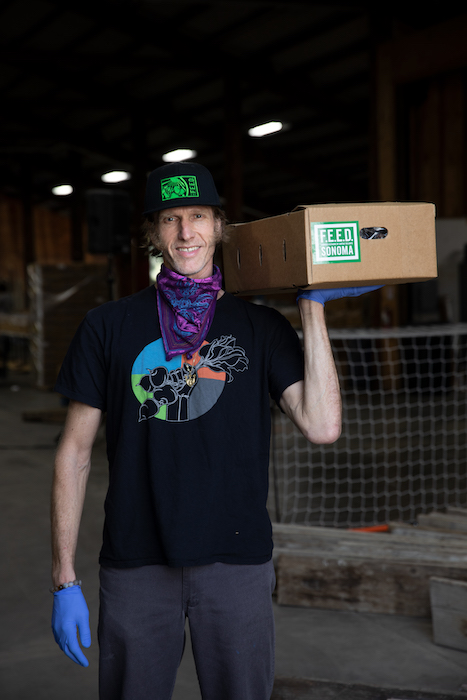 Among the few silver linings of the current crisis is a surge in CSA sales. In early March, many CSA farms were struggling to fill their 2020 membership. Just a few weeks later, most had waitlists. Now more than ever, consumers are seeking healthy, local food from sources they can trust as well as any way to avoid crowded grocery stores. FEED’s make-or-break wager is to help meet that demand, offering weekly boxes of locally grown goods from dozens of farms.

In the FEED Bin’s first week, Page and his crew assembled and sent out almost 500 boxes that included Meyer lemons, Siberian kale, watermelon radish and more. By the second week, that number doubled, and they’re making plans for add-on products like meat, dairy, and eggs.

Still, Page admits, “We’re pulling in about 30 percent of normal revenue while working twice as hard.” To keep his employees and his farmers paid, they’ll need to push out at least a few more thousand boxes per week. He still anticipates their big transition to a cooperative model by summer, but at that point, the farmers will determine their own fate, voting on how to proceed as the crisis unfolds. “Our community has gotten us this far,” says Page. “I trust it can get us through this.”

Sunday morning at the Sebastopol farmers’ market is amiss. Gone are the leisurely ambling crowds, the drum circle on the lawn. An eerie hush permeates the scene as the bandstand sits empty. Perhaps most surprising of all: parking is easy to find.

While farmers’ markets, like grocery stores, were deemed “essential” by the state and allowed to remain open, they’ve been stripped of their frills. In place of music, art, and neighborly gossip are hand-washing stations, caution signs and vendors donning rubber gloves, instructing customers to approach stalls one at a time.

From the looks of it, you’d think sales must be abysmal. But Carla Rosin, the market manager, reassures that it’s not as bad as it looks; it’s just that shoppers aren’t lingering like usual. “[Instead] they greet each other from a distance as they pass,” explains Rosin, “they exchange a smile, a few words of concern and hope or a wave.” 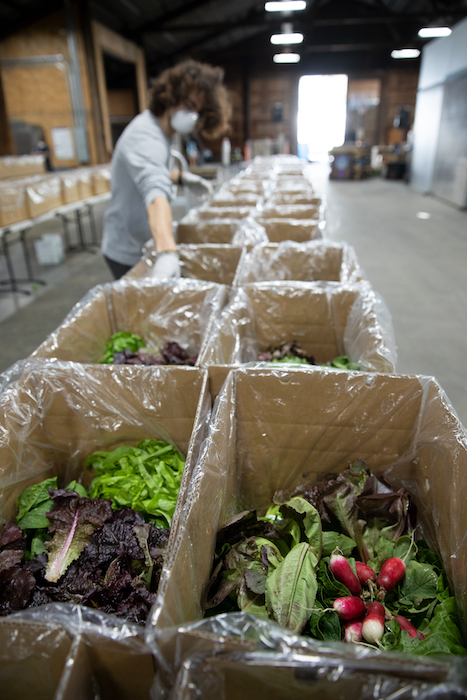 Like farms and food hubs, Rosin and other market managers are exploring new models to adapt. However, each farm at the market operates differently. And while a few may be tech savvy, many aren’t familiar with the tools required for e-commerce. Or they simply don’t have the time to learn and implement new systems quickly. Coordinating inventory on such a small scale can be a challenge.

So, when existing online delivery services refused to work with Kelly Smith, claiming that farmers’ markets were “too niche” and unpredictable, she decided to take matters into her own hands. The executive director of Agricultural Community Events, she operates 13 markets in Sonoma and Marin Counties. Within days she’d set up a simple online spreadsheet to facilitate pre-order curbside service. Farmers could post their availability in advance and customers could pick out items, which Smith would then manually assemble and have ready on market day.

“Okay, so it’s a little archaic,” she admits, understandably exhausted. On top of her adventures in DIY e-commerce and the additional safety precautions, Smith had to suddenly relocate one of her markets, while pleading with a city government not to shut down another.

“I think some people have this idea that farmers’ markets are a luxury,” she said. “But they’re not. They’re vital food lifelines for families and farmers.” In fact, through California’s Market Match program, farmers’ markets can double customers’ federal nutrition assistance benefits like CalFresh and WIC, empowering low-income customers to make healthy food choices. “Shopping here is safer than at a big grocery store. And everyone deserves access to that.”

As a community that’s survived multiple disasters in just a few years, Smith and others fully recognize that there’s still work to be done and precautionary measures to refine. But they also agree that crises can bring out the best in people. Just like during the wildfires, Sonoma County is ready to roll up its sleeves and work together to keep everyone safe.

“We’re acting like a hive of bees,” says Smith. “For the sake of the colony, we’re working together to protect what’s most important: the honey, our food, and each other.”