In late February, as most people already know, a stalled atmospheric river caused severe flooding in Guerneville, Sebastopol, and other areas, partially or totally destroying many businesses and homes across Sonoma County. 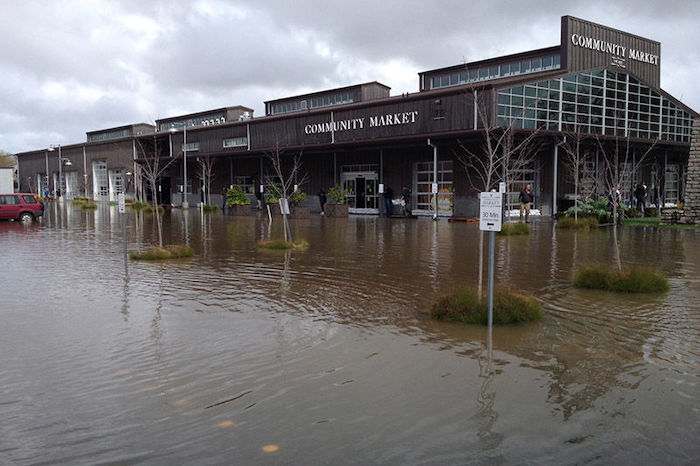 The Barlow, an upscale shopping district built within the Laguna de Santa Rosa flood plain that is home to many locally owned restaurants, breweries, and wineries, was hard hit by the flooding though Fern Bar, California Sister, Taylor Lane and a few other businesses were not flooded and have remained open. Remember, the best way to help in the recovery of The Barlow is to support the functioning businesses.

We reached out to Lisa Waltenspiel, marketing director at Community Market in The Barlow, which was forced to close for a few weeks, to find out what happened to them and how they have bounced back.

Made Local Magazine: How was Community Market impacted by the February flooding?

Community Market: We were closed from Tuesday, Feb 26 to Sunday, March 31, re-opening on Monday, April 1. We were forced to immediately lay off nearly 60 workers.

MLM: What amount of damage did the market sustain?

CM: In addition to the total loss of refrigerated and frozen perishables due to the electrical outage and destruction of fixtures and equipment, we lost close to $1 million in sales revenue due to the closure.

MLM: Were you able to raise money through online fundraising or any other community fundraisers to get the market back in operation?

CM: We have a GoFundMe campaign and folks have been very generous. So far we have raised over $14,000, which has been a huge help in getting doors open. We still have a long road toward regaining our financial equilibrium. We also had a wonderful worker relief fundraiser at the Arlene Francis Center in Santa Rosa, which brought in almost $10,000 specifically for our workers who were laid off.

MLM: How difficult was it to get the store reopened?

CM: It was necessary to replace all of the sheetrock on our walls, and our fixtures and equipment had to be thoroughly sanitized and passed by the health department. Many fixtures were damaged beyond repair.

MLM: Anything else you’d like our readers to know?

CM: The outpouring of community support reminds us of how appreciated and needed we are to our dedicated and loyal customers. We have been referring to the ancient symbolism of the lotus to describe our journey: Our community has supported us in our resilience to enable us to rise up from the muck and mud, emerging strong and vibrant. No mud, no lotus.