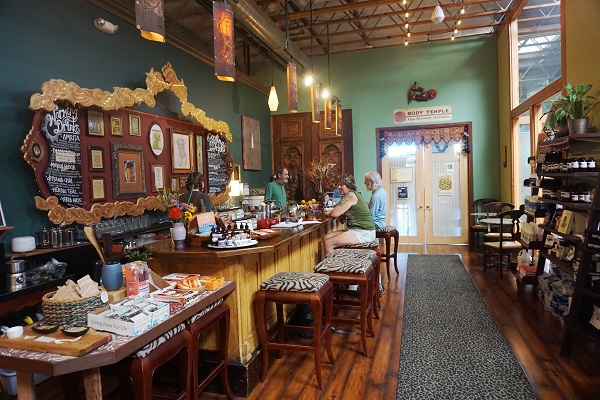 DeAnna Batdorff, founder of the Dhyana Center, an Ayurvedic center in Sebastopol, first started making “smart” drinks at the height of the rave scene in the ‘90s. Non-alcoholic by design, the juice-based, vitaminladen drinks kept ravers hydrated and energized as they techno- danced the night away, When the Dhyana Center expanded into a larger space in 2008, Batdorff and her partner Scott Jenkins added the Apothecary Bar, taking the smart drink concept to another level with an Ayurvedic touch.

Inside, the bar is a high-ceilinged, art-filled, and animal-print heavy space with the feel of an eclectic, cozy health den. World music plays softly in the background and people flow through the space towards the Self-Care Sanctuary (drinks can be sent over there to be enjoyed in a warm tub). Boxes of playing cards are scattered across the bar for spontaneous games of Go Fish. You don’t have to understand a lick of Ayurveda to enjoy the drinking experience here, but it might help to understand that Ayurveda finds its basis in the Sanskrit word for life and is defined as the study of balancing body systems using breath, movement, nutrition, and herbalism.

Confused about what to order? Batdorff has compiled a handy survey you can take while sitting at the bar. Do you have feelings of distrust or tight boundaries after reading one too many articles in The New York Times? You might run cold, which means you’ll want to order a gingerheavy, warming drink. Seething with anger and resentment after watching one too many hours of senate hearings? Try a cooling drink with elements of dill or cilantro. You can always ask for guidance from the Dhyana Center students who tend to the bar and the adjoining shop as part of their training.

On the recommendation of Jenkins, who is tending the bar during my visit, I start off with the Kumari ($6.50), a cooling drink of muddled aloe juice, fresh mint, honey simple syrup, and Anjelica tincture made by Rachel Rodriguez, the center’s medicine maker, poured into a classic stemless cocktail glass.

The drink carries flavors of sweet, sour, and astringent across the tongue, and tastes so much like a cocktail that a placebo high kicks in quickly, followed by warm feeling of conviviality. I follow it up with a Scarlet Lotus($6.50), a “blood-building” blend of cranberries, ginger, nutmeg, cinnamon, lime zest, ashwaganda, honey simple syrup, house-made orange tincture, and a few other esoteric ingredients.

“This is the most decadent-looking drink of the bunch,” says my bar companion, who also happens to be a practitioner at the Dhyana Center. “It’s kind of like a Cosmo in Sex and the City.” 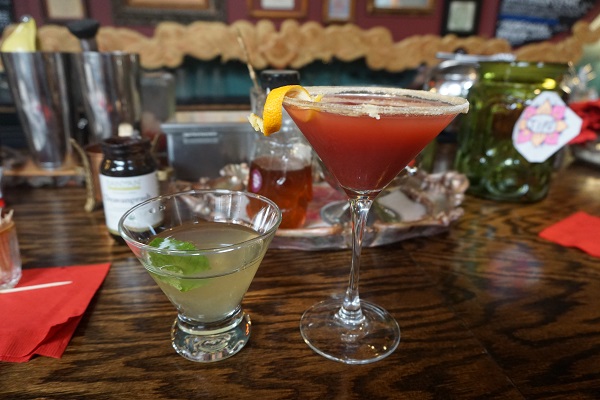 She’s right. Served in a martini glass, the Scarlet Lotus nearly tricks me into thinking I’m drinking the hard stuff. The rim is circled with powdered honey, giving a sweet kick to the first sip, which goes down smooth. But instead of hinting at a bummer of a hangover, I feel invigorated. Something about the cinnamon, maybe.

Not in the mood for a wholesome, no-alcohol cocktail? The menu also includes herbal teas and tea lattes ($3), seasonal shrubs ($5), Yerba mate ($2.50), coconut water, and something called the “Amrita,” a creamy, spicy version of turmeric golden milk. As for me, I’ll be imbibing another Scarlet Lotus and feeling no pain in the morning.

The Dhyana Center Apothecary Bar is open 9am to 8pm every day. 186 North Main Street, Sebastopol

Healthy Happy Hour with music, snacks, seasonal drinks, and selfcare tips on the third Thursday of the month from 5pm to 7pm