For 26 years, Jim Cadden lived with his wife Carol in a home above Mark West Creek, a tributary of the Russian River. An avid fisherman, Cadden cherished the creek as a breeding ground for endangered steelhead trout. “I used to take my grandkids down to show them fingerlings in the water,” says Cadden, a retired Kaiser Santa Rosa emergency room physician. “It was a beautiful piece of nature and a good place for kids to learn.”

Everything changed on October 9 when Cadden’s residence burned to the ground, his belongings reduced to a pile of potentially toxic ash and heavy metals. Once the initial shock passed, he turned his attention to protecting the waterway below. The forecast called for rain, and the threat to the creek was real. With thousands of burn sites to clean-up, contractors for the Federal Emergency Management Agency (FEMA) wouldn’t be out to remove debris until it was too late.

That same week, Cadden was forwarded an email from the Sonoma Ecology Center with information about a coordinated emergency effort to provided free rice straw wattles for watershed protection. Used to create a perimeter around debris fields, the wattles contain the ash before it can enter waterways. Cadden contacted Chris Grabill, a local contractor and member of the hastily convened Watershed Task Force. Soon, a truck arrived with eight heavy, snake-like wattles. 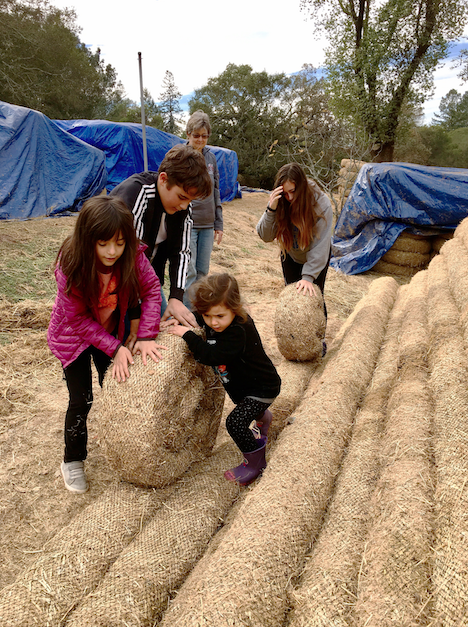 The lightning-fast delivery of the wattles—followed by a massive volunteer mobilization to get them installed around thousands of burned structures—was made possible by an unprecedented coordinated effort by the County of Sonoma, the City of Santa Rosa, the North Coast Regional Water Quality Control Board; local businesses like Sonoma Clean Power, Jackson Family Wines, and The Wattle Guys; and nonprofits like the Sonoma Ecology Center, Russian Riverkeeper, Community Soil Foundation, Clean Water Alliance, and Sonoma Conservation Action.

It was all driven by an urgent imperative: to protect the Russian River and Laguna de Santa Rosa watersheds from environmental devastation.

As Cadden, like thousands of homeowners and renters, dealt with the shock of losing his home, the Regional Water Board jumped into action, strategizing how best to keep ash and debris from ﬂowing into storm drains. It was an extraordinary challenge and one with dire consequences: Once toxins and sediments get into waterways, it’s nearly impossible to get them out, threatening harm to wildlife and the environment. The clean-up effort can also be expensive: A large wildfire in Colorado led to millions of dollars in clean-up costs at the reservoir where Denver residents get their drinking water.

“We felt a real sense of urgency; I had a hard time sleeping knowing rain was coming and all of our storm drains were unprotected,” says Mona Dougherty, program manager for the Regional Water Board’s storm water management program. “The water board usually comes in more towards the middle or end of water issues—to help with monitoring, regulation, and grant funding. But because of the extraordinary situation and risk, we took a much more active role in putting down protections for storm drains, buying the erosion control supplies, and assisting the city, county, and homeowners.”

A Watershed Task Force also formed right after the catastrophe, which included Dougherty, county officials, city representatives, and NGOs. They had no choice but to hit the ground running, says Chris Grabill, program director for the Watershed Task Force through Sonoma County Conservation Action.

According to Grabill, ash in waterways poses a threat not only to fish, wildlife, and public health, but it could negatively impact the viability of organic agriculture and grapes in the long term. “This is a big deal in a county so invested in organic agriculture,” says Grabill.

He recalls those early meetings in October, the debriefings held in army tents furnished with “ratty tables and hanging lightbulbs” outside the county buildings. The task force poured over data, performing something called “geo-spatial triage” by using U.S. Geological Survey maps to deduce exactly which burn sites posed the highest risk for waterway pollution and mudslides. FEMA, Cal Fire, and the Governor’s Office of Emergency Services buzzed around them. “It was all let’s go, let’s go . . . very wartime,” Grabill recalls.

The geo-spatial triage pointed out an immediate need for perimeter controls in Coffey Park. The closely spaced homes on urban hardscape had turned to ash piles that would run-off directly into storm drains. Dwellings near creeks were also pushed to the front of the line. “What’s the most effective and quickest thing you can do with the resources you have to get ahead of these things?” says Grabill. In other words, what was the best management practice in this case? The team quickly settled on correctly and strategically placed wattles. The Regional Water Board reached out to The Wattle Guys, a local company with established expertise in storm water technology. 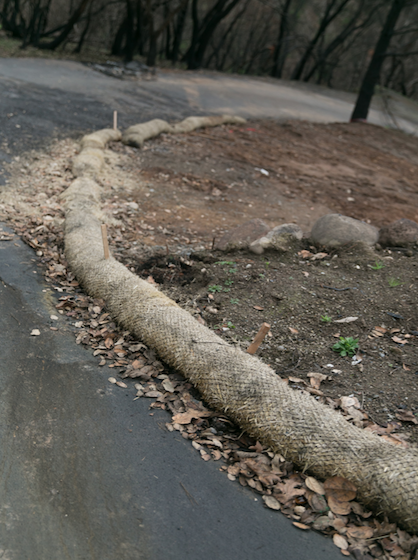 One of company’s owners, Doug Allard, had lost his home in the wildfire but that didn’t stop him from joining the effort. After receiving the water board’s order for a large number of wattles, which are made from rice straw sourced from the Sacramento Valley, he turned the former site of his home into a mobile wattle production facility without knowing whether his company would be reimbursed for the materials. Producing the wattles in the middle of the fire-decimated neighborhoods of Fountaingrove and Hidden Hills allowed for easy delivery and simplified logistics in the face of unfathomable destruction.

Allard estimates The Wattle Guys have distributed at least 40 miles of wattles, some donated and some sold at cost to the City of Santa Rosa, the county of Sonoma, and Cal Fire. Stretched end-to-end, they’d span the distance from Rohnert Park to Cloverdale. Another three truckloads were donated to Friedman’s Home Improvement, which has been giving out free wattles to fire-impacted homeowners.

“This was a brand new experience for us,” says Allard. “We are long- time Sonoma County people. This is our hometown. It was obvious that we needed to step up as a local manufacturer with a lot of experience in storm water management.”

At the same time, Sonoma County Recovery—a website established specifically to facilitate fire recovery efforts—took on the task of coordinating the hundreds of volunteers needed to install miles of wattle on an urgent timeline. An outpouring of volunteers came out to unload wattle, lay them in trenches, and nail them down to stay put through the rainy season.

So far, the widespread effort to protect the watershed seems to be working, says Mona Dougherty. In coordination with the Sonoma County Water Agency, the water board has done in-stream monitoring for pollutants in creeks near burned areas.

“We are seeing elevated pollutants, but not outside of the range we’d normally see during a rain event,” she says. “The best management practices are proving to be effective—so far—in keeping the ash out of the storm drains and out of the surface waters.”

Pockets of Fountaingrove continue to struggle with water contamination from benzene, a volatile hydrocarbon commonly found in plastics, but this appears to be an isolated incident.

The funding allowed for Grabill to be hired on full-time as a coordinator of this many-limbed movement. “This immediate investment in our watersheds will reduce the risk of erosion and landslides—protecting life, property, and water quality—while making us more resilient going forward,” said James Gore, county supervisor and chair of Sonoma Clean Power’s ad hoc committee on fire relief donations.

So far, so good. And yet, years of work, water quality testing, and diligence lie ahead to ensure a clean water supply for fish, animals, and people of the Russian River watershed.

For Jim Cadden, the water protection work provided some control in the face of overwhelming loss.

“The Russian River—and the fish—are coming back. A lot of rejuvenation is going on,” he says. “To see the potential damage caused by the debris to this segment of the ecology makes you want to do something—to say enough is enough. There’s nothing you can do about the fire, but there are things you can do to mitigate the secondary damage.”