Twenty-seven years ago—at   the urging of his brothers who had found jobs with a local waste management company— Patricio Estupiñan immigrated from his hometown in Central Mexico to Sonoma County. Within no time, he was hired to drive a garbage truck. When the 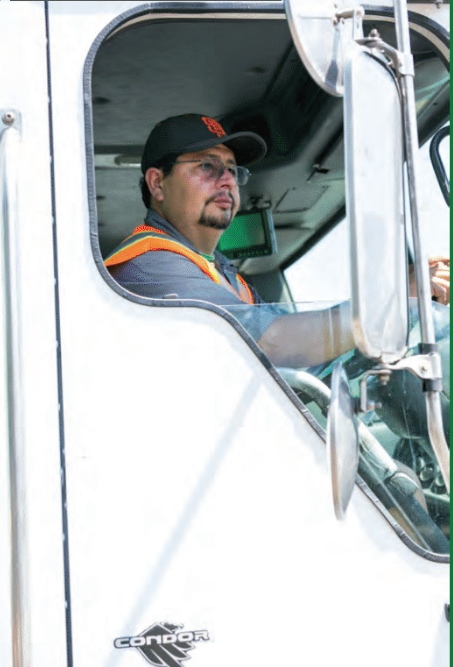 company eventually sold to the Ratto Group, a subsidiary of North Bay Corporation, the county’s largest waste hauler with service to eight of nine cities, Estupiñan, now married with two children, was earning $24.70 an hour with benefits.

After the sale, things deteriorated. First, Estupiñan’s hourly wage was cut by one dollar, a loss that he calculates cost him thousands of dollars a year. Then, he realized he was being paid more than the employees who were already with the Ratto Group, and they grumbled about rarely receiving raises. The two-tier wage system bothered him. Why should two people do the same amount of work and not receive similar pay?

“Three or four drivers tried to do something about it and got fired,” he tells me over coffee on a Saturday afternoon in Roseland. “[The management] told people, ‘If you want a raise, there’s the door.’”

Estupiñan, 47, is stocky with cropped black hair. Behind prescription glasses, his brown eyes are focused and intense. He’s already apologized once over the phone, and again today, for limited English-speaking skills, but that doesn’t stop him from telling, with urgent clarity, the story of he and his fellow workers’ climb to unionization. “Everybody was like me—Hispanic, we don’t speak English—and everybody was upset and wanted to do something, but we couldn’t.”

Compounding frustration with the two-tier wage system and their few-and-far between raises were the equipment failures. The waste-hauling trucks broke down regularly en route and other drivers would be forced to extend shifts to cover missing lunch breaks and doctors’ appointments. The trucks sometimes lacked radios, air conditioning, even seat belts. At the Santa Rosa recycling facility, especially on the night shift, workers complained of the rats that would leap out from beneath materials coming down the line from the blue recycling bins. Once or twice a rat ran across Estupiñan’s feet as he refueled his truck. On top of it all, despite being part of a dangerous industry with poor safety records, a safety meeting might be a five-minute session where drivers were told, “The weather has changed, the roads are wet. Be careful, guys.”

After years of these conditions, Estupiñan could no longer keep his head down. He was “very, very tired” and he’d had enough. He looked around and saw colleagues who were “ticking time-bombs”—sleep-deprived, underpaid, and working long shifts. About two years ago, he began talking to the other drivers. We should do something, he urged. It was all covert, done between hauls and fueling, and only with people he trusted. Eventually, he amassed enough interest to reach out to a Teamsters’ shop steward in San Rafael, who helped him set up an appointment with Mike Yates, president of Teamsters 665 in Santa Rosa. On a Sunday afternoon last October, about 10 drivers met with Yates. They voiced their grievances and asked for support. Estupiñan left the meeting galvanized and ready for a union drive that would take eight months, a period of time that would include the surprise sale of North Bay Corporation, including the Ratto Group, to San Francisco-based waste management company Recology.

“The time is right,” Estupinan told his coworkers in late fall. “The revolution is ready to start.”

This wasn’t the first time Ratto Group workers had a dalliance with the Teamsters—but previous attempts had been quickly squashed. Still, only a few months after that October meeting with Mike Yates, more than 90 percent of the Ratto Group workforce, around 400 drivers, clerical staff, and recycling workers, voted to join the union. Recology has pledged to honor the contract.

“The workers were really the ones that pushed this whole thing forward,” says Yates. “They were active and they got everybody else to participate.”

Something else came into play in the campaign, different from anything Yates had seen in eight years with the Teamsters. Soon after the launch of the campaign, as Estupiñan stoked up support among his colleagues for a “yes” vote, Yates was approached with an out-of-the-box proposal from Marty Bennett, the co-chair of North Bay Jobs With Justice. How might a zero waste campaign align with the labor campaign? Furthermore, how might they unite the fight for good, well-paying waste management jobs with the fight to set higher environmental standards for Sonoma County’s waste-hauling system? Inspiration came, in part, from Don’t Waste LA, a coalition of environmental and labor organizations working to increase recycling and composting in Los Angeles while cleaning up a “historically dirty and dangerous industry.” The coalition has a track record of working with city leaders to transform the waste management system into one with greater recycling and diversion from landfills, fair rates, quality service, clean trucks, and safe jobs.

The timing was significant. The Ratto Group had recently gotten a huge black mark in an audit that dinged the company for the failure to rebuild an aging fleet of polluting and unsafe trucks, a below- average diversion rate from landfills, poor customer service, and a substandard recycling facility.

Yates saw Bennett’s point, and the door opened to an informal coalition between the Teamsters, Jobs with Justice, Sonoma 350, and Sonoma Conservation Action. “As we started working together, we found out that we really do align with the environmental groups,” says Yates. “Paying workers well and high environmental standards   go together.”

“North Bay Jobs with Justice bonded with 350 Sonoma because we have this climate crisis, which is ever more perilous and the timeline seems to be getting shorter and shorter,” says Bennett. “Ratto was diverting no more than 40 percent from landfill, which is such a potent source of methane gas. At the same time, we have a crisis of low-wage employment. We’re in a so-called recovery but if you project out over a decade in Sonoma County 50 percent of the jobs created will pay less than a livable wage. We say that a livable wage is at least $20 an hour, but that’s very conservative.” The best waste management companies, he adds, provide job security, health benefits, workplace safety protections, and good training to their workers, who are on the frontline of quality control and production.

While Sonoma County may be progressive in some sectors, this hasn’t been the case in regards to how waste management workers are treated and how waste is managed. The county may have lower than average trash collection rates—but at what cost? An auditor hired by the City of Santa Rosa calculated that only 39 percent of recyclable and compostable waste was being diverted from the landfill (an internal Ratto Group audit contested this and insisted on a diversion rate of closer to 46 percent). However, that’s still nowhere near the 75 percent waste diversion by 2020 mandate by California state law AB 939. In contrast, San Francisco—where Recology is contracted to do all waste hauling and processing—has an 80 percent diversion rate.

“What Sonoma County really needs is an environmental leader that’s going to take us to the next level, something that we can be proud of, instead of barely hitting the state minimum for diversion,” says Yates. “A company that takes pride in doing a good job and helps us get back to where we should be. Our environmental groups are incredibly active, and do all sorts of good work, and it’s crazy to think we could have this going on here.”

Sunny Galbraith is on the 350 Sonoma steering committee. She jumped at the chance to attend events to support the Ratto Group workers’ successful union drive. She’d like to see a “Don’t Waste Santa Rosa” effort, similar to Don’t Waste LA—a movement where environmental groups work side-by-side with labor organizers and workers to improve both diversion rates, through improved composting and recycling, and the quality of jobs in that sector. As such, Sonoma 350 has joined an informal coalition of environmental and labor groups that’s in the early stages of drafting a countywide zero waste ordinance to present to county and city officials. They’re modeling the ordinance on similar initiatives passed in Oakland and San Francisco.

“There’s been legitimate criticism of the environmental movement—that it’s just older white people or people privileged enough to be worried about things beyond immediate family, income, and living issues,” says Galbraith. “The fact is that we are all affected by environmental degradation—especially communities of color and poor communities. People in the environmental movement are realizing that you really can’t separate the movement from social justice issues like safe jobs and living wage jobs.”