If you’ve ever had the good luck to visit the Mother Garden at the Occidental Arts and Ecology Center, then you know what the Garden of Eden might have looked like. The garden’s beauty and abundance is largely due to the hard work and vision of Doug Gosling, the longtime garden manager, who arrived at the land that would become OAEC in 1982, when it was still under the auspices of the Farollones Institute. Three decades later, it’s a lush, breathtaking vision of how we might live. It also turns out, according to Olivia Rathbone, author of The Occidental Arts and Ecology Cookbook , that along with being a “guru of gardening” Gosling is quite the chef. He contributed some of the more “inventive” recipes in the book, including one for Cecil Brunner Rose Sugar. In this interview, we focused on Gosling’s expertise and philosophies on seeds and seed saving, for which he’s also known around the county.

“Seed saving seems to be one of the last things that people learn when they’re gardening. There’s something about it that’s mysterious or intimidating—and to some people it just doesn’t seem important. A lot of people think that seeds come in beautiful packets with photographs and art. It’s sometimes hard to make that shift to, well, actually, the best seeds you can collect are the ones you save yourself. There’s no better way to understand plants fully than to appreciate them throughout their entire lifecycle from seed-to-seed and to understand that all flowering plants go through that cycle. I remember almost having to abandon the seed packet to believe that what I had collected myself was superior. They are fresh and you know where it came from, and in a short amount of time—a few generations— plants adapt to place. So seed saving has become integral to the OAEC garden. Gardeners really would benefit from making physical, psychic, and intellectual space for seeds. Once you start, most people become addicts because it’s so much fun. There’s nothing better; seeds are so miraculous. It’s so wonderful to learn, for each plant, how to save seed and what the seeds look like. It really is about fully and deeply understanding plants.”

“There are ways to start simply. There are a lot of plants, like tomatoes and lettuce, that are self-pollinated, meaning you don’t have to worry about outcrossing. Those are the two easiest ones to start with. And then you build your knowledge from that point. It’s a little bit like how you should start a garden—one bed at a time rather than planning a vast garden and jumping into it. Just take it gently and slowly. Start with cilantro or dill because generally there aren’t a lot of varieties of those. Then maybe beans or tomatoes. Focus on how to grow and process those seeds.”

“First, how long is a seed viable for? How often do you need to renew that seed? The other is how is it pollinated? There are only three basic ways that plants are pollinated: selfpollination, insect pollination, wind pollination. The other thing you need to do is find out how plants are related to each other. Do they flower at the same time? Do they come from the same species, meaning they’ll cross-pollinate each other? Learning how plants are related to each other can be very interesting.”

“Seeds shouldn’t be owned. When you take on the responsibility and pleasure of saving your own seeds, they are yours. Or they are ours. The idea of a seed 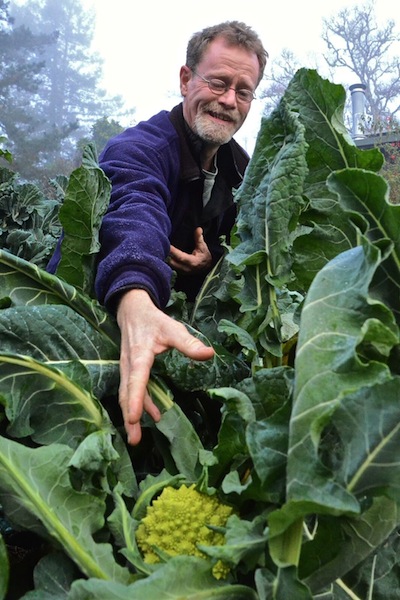 company is kind of a modern idea. There have only been seed companies for a hundred years or so. People used to trade seeds and seeds have been used as currency in different places, but the idea that seeds have become commodified and patented and that the parentage of certain hybrids, for example, is proprietary, is taking seed saving in a direction that I think is unfortunate. To take what is ours is the radical act. To be in relationship with living things rather than to own them is how we ought to live. Seeds of our food crops: they’re our food crops, and we ought to be able to grow our own food and propagate our own seed. Until recent history, that is what people did. People even understood breeding and selecting; it may not be in the scientific way that we understand it now, but people have always known how to select and be in conversation with plants. I think gardening is a radical act nowadays. Because it really is about saying, ‘I want to be in relationship with my world.’ Anyone can garden. Everyone has their ideas about why everything is falling apart, but I think a lot of it is because people don’t have relationship with the world that they live in—and they don’t even notice it. We’re losing our skill sets.”

The Work at Hand

“It’s about encouraging people, especially children, to learn how to garden. It’s like a key to seeing the world. Like a gateway into remembering what is essentially part of who we are. It’s an incredible tool for us having a relationship with both our living world and ourselves. [It’s also important] to understand that seed saving is integral to understanding gardening fully. The more we save seeds, the more we create demand in our culture for those seeds. The more people that hold the seeds, the more secure we’re going to be in a time when we’re facing so much uncertainty.”

Not Your Parents’ Gin